"Baby, It's Cold Outside ...": The Polar Vortex Meets the GOP Circumpolar Political Whirl 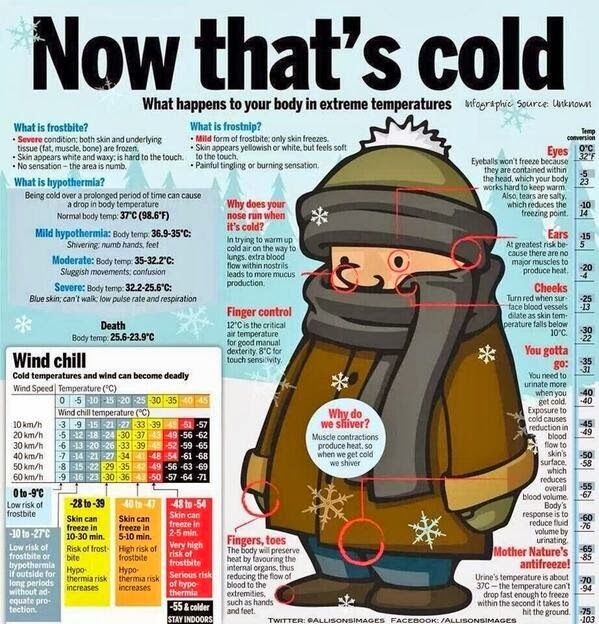 A cute AND useful little graphic explaining the effect of extremely cold temperatures on different parts of the body. Unfortunately, it is difficult to read. I think if you download it and then open it up in Paint or some such program, it should be large enough to be readable.
The graphic appeared in a January 5th, 2014 entry on Capital Weather Gang (link embedded): North Pole invades U.S.: 10 bitter, bone-chilling visuals.
*******


There has been much media and popular discussion of the term "polar vortex" (it is also sometimes called the "circumpolar whirl") -- and it is clear that many people do not understand what this means. To that end, one of the forecast offices of the NWS put out this helpful graphic with bulleted explanations: 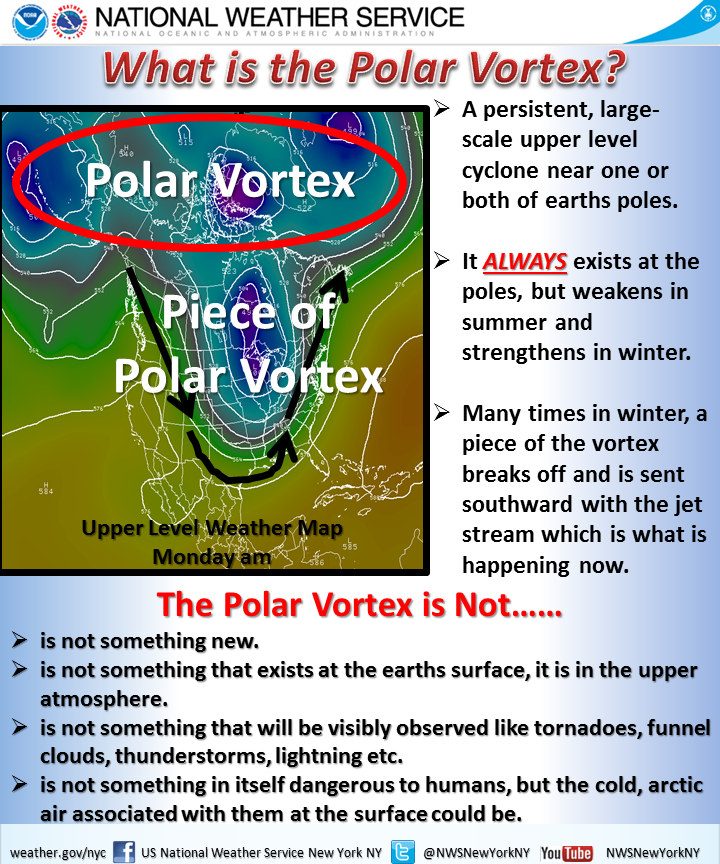 This graphic was carried in tonight's CWG entry.


The information in here brings me to a related topic of the sudden stratospheric warming (SSW). My friend Kristof -- who is basically one of the leading scientific experts in tropospheric / stratospheric interactions (both dynamics and chemistry) -- explained to me that while there was an SSW last winter (January / February 2013), there has NOT been one this year and thus the current Arctic outbreak is not related to it. Rather, he said the information instead shows that polar vortex has been extremely elongated in this hemisphere.
Kristof directed me to the near real-time information on SSWs available on this NASA GSFC website. 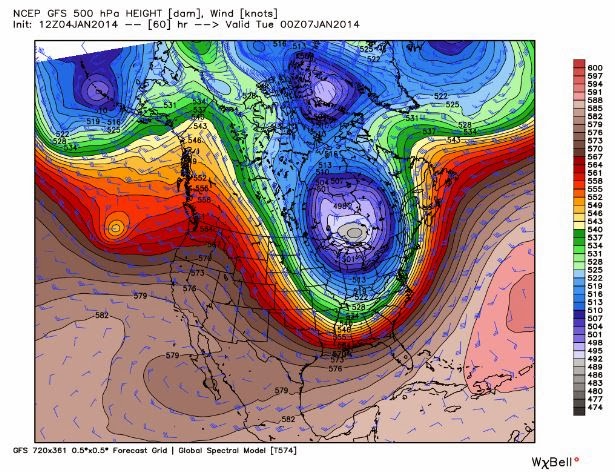 To the above point, this image -- which comes from a CWG entry linked below -- of 500-hPa geopotential heights (in dekameters (dam)) and winds (in knots) from the 0Z January 4, 2014 run of the GFS valid at hour 60 / 0Z (7AM EST) January 7, 2014 and prettied up by the folks at WeatherBELL Analytics clearly shows the elongated polar vortex with the large of the two pieces centered just north of Lake Huron.
This incredibly elongated north-south (meridional) configuration explains why the actual surface weather map from earlier on Monday featured the Arctic front stretching all the way from New England down to the Bay of Campeche (the southern bight of the Gulf of Mexico). 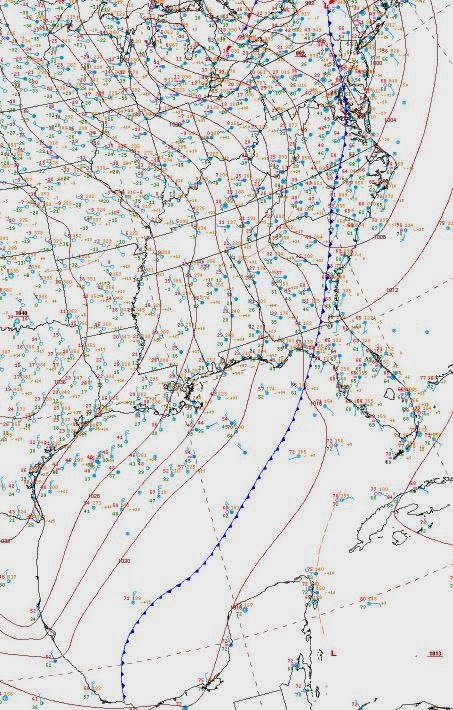 Portion of the NWS / WPC 12Z (7AM EST) January 6, 2014 high resolution surface weather map issued at 1331Z January 6, 2014. It shows the Arctic front stretching almost 2,000 miles in NNE / SSW orientation.
Of note, the high visible in the above image centered over northern Texas and southern Oklahoma had a central pressure in this map of 1040mb. That's the kind of high pressure you get over Novosibirsk, not Wichita Falls.
******* 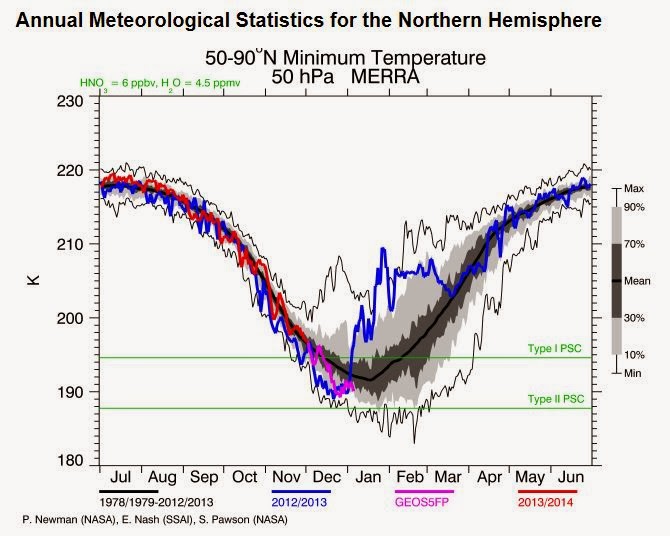 This image taken from the NASA GSFC page linked above shows an annual minimum temperature curve for the region between 50N and 90N (i.e., the sub-Arctic, Arctic, and North Pole itself) at 50-hPa (well into the stratosphere) based on the NASA Goddard MERRA model. The dark line is the average based on 1978-'79 to 2012-'13 data. Also shown is 2012-2013 data (blue line) and the current 2013-2013 data (red and magenta). The chart also shows the threshold temperature (in Kelvin) when Type I and Type II PSCs (Polar Stratospheric Clouds) form.
The 2012-2013 data shows the dramatic SSW in January and February 2013.
Below is the corresponding curve for the Southern Hemisphere from the same page. It gets much colder in the Antarctic wintertime vortex -- which leads to the processes that has allowed the ozone hole to form for so many years because of the presence of manmade CFCs. 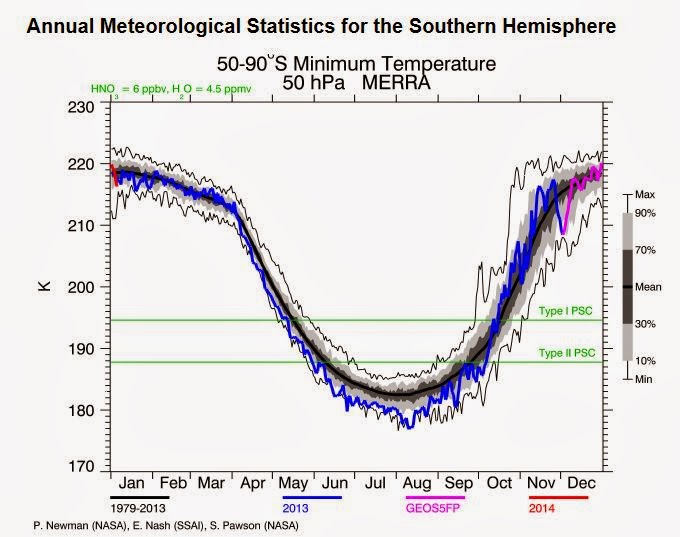 Of note, one of the authors of this chart -- P(aul). Newman -- is somebody I worked for back in 1998 helping put together an "electronic textbook" on stratospheric ozone processes and seasonal Antarctic ozone depletion.
*******


Anyway, needless to say, tonight is a bitterly cold, gusty windy one across the region with temperatures at the midnight hour as follows: 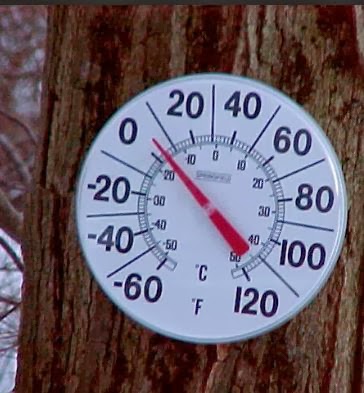 Temperatures farther west are even colder including 3F in Hagerstown, Md., (KHGR) and 4F in Martinsburg, W.Va., (KMRB).


Dew points are well below zero (-11F to -14F). However, the winds are still gusty, and that may actually hinder additional radiational cooling -- i.e., additional cooling will have to be advective.
Wind chills tonight are in the -5F to -15F range in the Metro D.C. and Metro Baltimore areas where wind chill advisories are in effect -- and -15F to -30F across the Blue Ridge, Shenandoah, Potomac Highlands, and Allegheny Front where wind chill warnings are in effect. 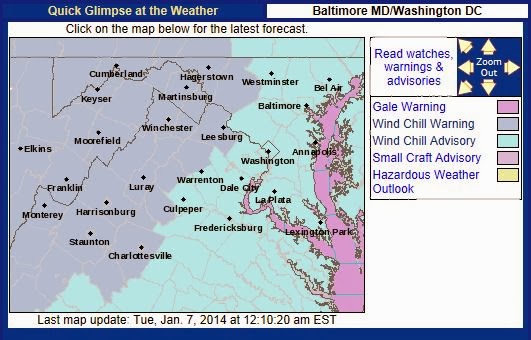 Advisories in effect for the Sterling (LWX) county warning area (CWA) as of 12:10AM January 7, 2014 showing the wind child advisories east of the mountains and wind chill warnings in the mountains.
*******


Much of the eastern half of the Lower 48 United States are under either wind chill warnings or wind chill advisories (although the criteria number for each will vary by region). Hard freeze warnings are in effect across much of the Gulf Coast states right to the Gulf of Mexico. Of course, these temps are nothing compared to the -10F to -25F readings across the Ohio River Valley into the northern Great Lakes region -- as well as the wind chills of -40F to -60F and blizzard / blowing snow conditions. Conditions were so bad in Indiana that Gov. Mike Pence had a state of emergency declared for a period in 29 counties in the Hoosier State that effectively banned all non-essential travel. 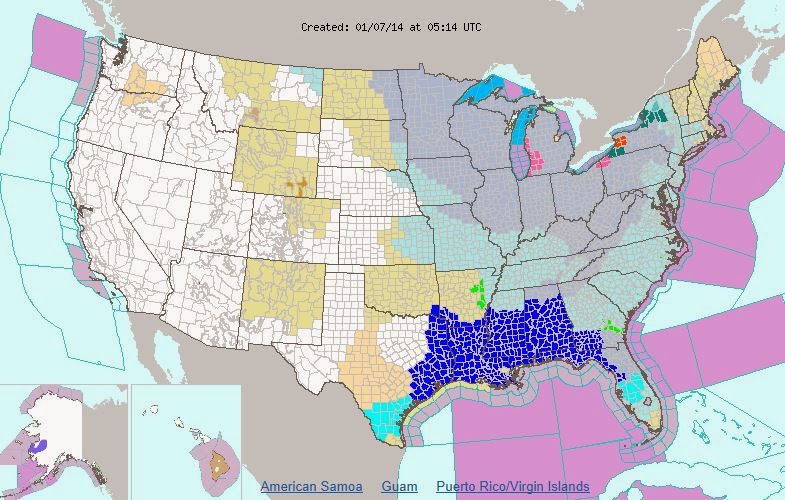 Weather advisories in effect across the United States at the county or (in the western U.S.) similar climatic / hydrological zones, updated 0514UTC (12:14AM EST) January 7, 2014.
Of note, there are blizzard warnings for a lake effect snow machine in overdrive off of Lake Ontario into New York State including the City of Buffalo itself.
******* 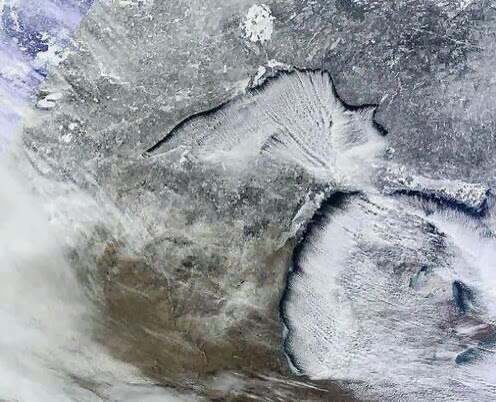 An astonishing high-resolution satellite image (possibly by the NASA MODIS instrument) of a portion of the Great Lakes regin including Lakes Superior, Michigan, and Huron, and the adjoining U.S. States and Ontario taken on January 5, 2014. Just look at the raging, howling snow-squally blizzards covering the lakes and the lower peninsula of Michigan.
*******


As for the D.C. / Baltimore areas, the lack of any large snowpack in the region is one reason that actual air temperatures (rather than wind chill apparent temperatures) in this cold wave will not go below zero as they did in the January 19 - 21, 1994 Arctic outbreak. The core of the Arctic air / polar vortex will move quickly to the east and conditions will start to moderate. 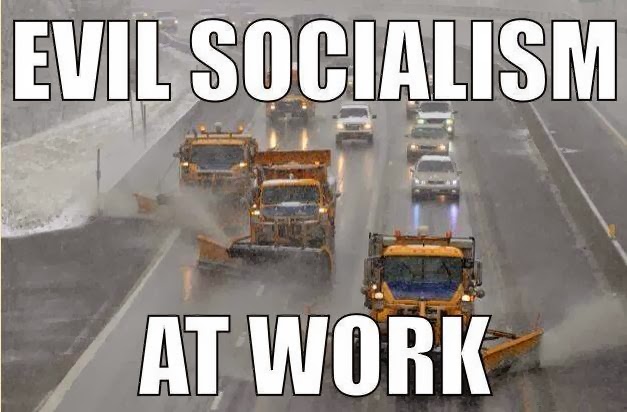 The Capital Weather Gang has had a number of good entries about the frigid outbreak across so much of the United States and putting it a larger context. I particularly liked this one by Jason Samenow yesterday, January 6th, 2014: The polar vortex in no way disproves climate change. 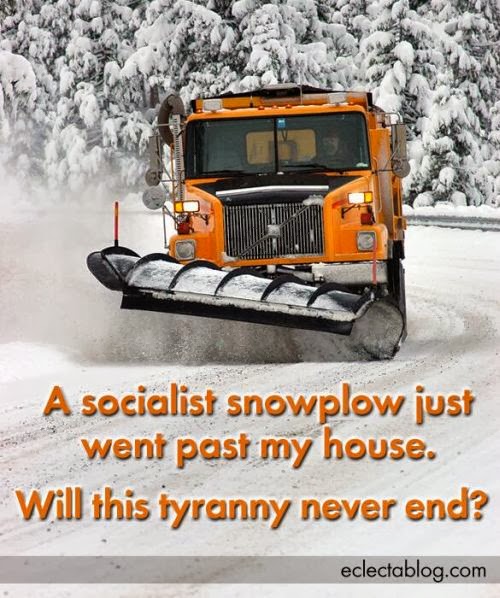 I have a comment posted on it (the first one, in fact). I suggested Jason categorize all the crazy and/or angry email he gets in response to this entry and then post representative emails. He responded that it was an "interesting idea." 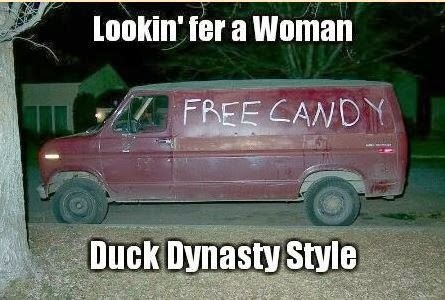 My idea was motivated by Josh Barro's Dec. 22nd, 2013 Business Insider column "'Duck Dynasty' Fans Are Sending Me Ridiculous Hate Mail" doing exactly this in response to all the crazed hate e-mail he got in response to his piece "When You Defend Phil Robertson, Here's What You're Really Defending" the previous day in reference to the whole Duck Dynasty nonsense. 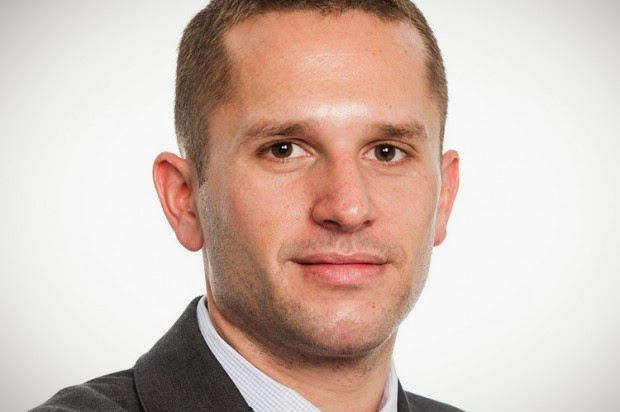 He also had a great follow-up piece on December 29th, 2013: "Here's Why I Don't Sweat the Haters". Make sure to read the semi-incoherent message shown from one fellow and Barro's rather funny response. 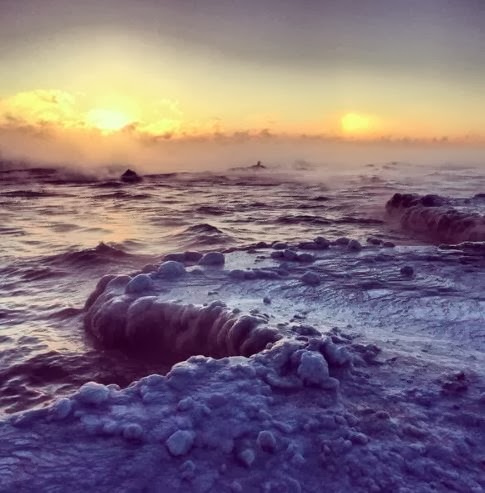 This picture was taken at sunrise along Lake Michigan in Loyola Park Beach north of downtown Chicago on January 6, 2014. The scene looks positively tundra-like -- or maybe on the shores of Novaya Zemlya.
It comes from the Daily Intelligencer blog entry (link embedded): Polar Vortex Getting Ready to Ruin Your Day [Update: It's Ruined].
And if I can segue into an unrelated political discussion ...
The Daily Intelligencer is the blog for which Jonathan Chait writes. He had a wonderful piece on January 6th, 2014 (link embedded): I Corrected a Misinformed Conservative About Obamacare. What Happened Next Will Neither Surprise You Nor Restore Your Faith in Humanity. 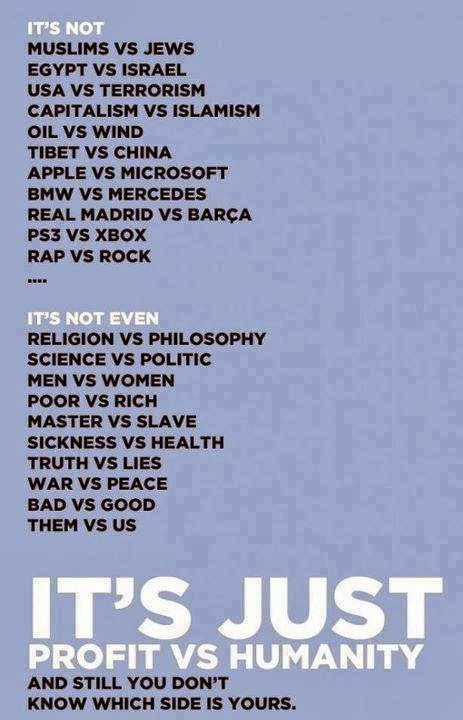 This refers to Chait's Twitter conversation with rightwinger Conn Carroll and how -- after Chait makes some irrefutable points about the Affordable Care Act (the "Obamacare" of swamp-fevered GOP imagination) and the preliminary effects on the health care cost curve -- Carroll just reverts to the usual rightwing bullsh!t and non-sequiturs about liberals loving "big gub'mint."


This piece followed one the previous day(link embedded): After Obamacare Is No Longer Doomed, It Will Become a Scandal. I can't really do the piece justice with excerpts, and it is rather late as I start this entry, so please just read it.
OK, that's all for now. I'm home at the late hour watching reruns of The Golden Girls on Hallmark Channel. I had a good gym workout tonight at the Anthony Bowen YMCA. I had to go tonight because I ended up not going last night (owing to how long it took me to write my previous blog entry). Despite the cold, the gym was mobbed for the first hour, but then it rapidly emptied out. I did my three-part routine including treadmill, weight-lifting, and swimming. This followed an OK day at work in which I am putting together a glossary for the Hawaii mega-report.
As for tomorrow, I have after-work plans with Andrea, Imara, and Jake at Black Finn. I am not taking the computer home tomorrow night. My next planned update will therefore not be until late Wednesday (i.e., early Thursday).
--Regulus
Posted by Regulus at 2:04 AM