Note: If it turns out that this weather event was worse in the suburbs than I thought, I'm going to have to revise / update this entry. 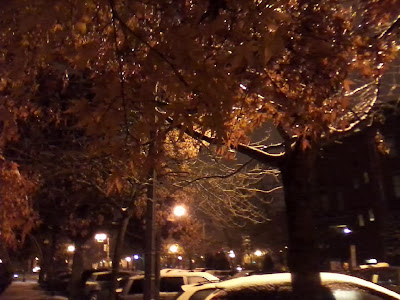 
It is presently (around midnight) semi-freezing rain heavily at the midnight hour here in Washington, D.C., as a second upper level impulse moves across the region tonight -- in association with the broad overrunning pattern that I discussed in my previous entry -- with lots of precipitation and marginal temperatures ranging from 27F in Hagerstown, Md., and Martinsburg, W.Va., to 34F in Annapolis, Md., and in Baltimore / Inner Harbor. 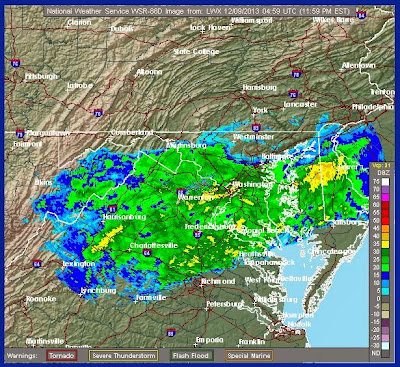 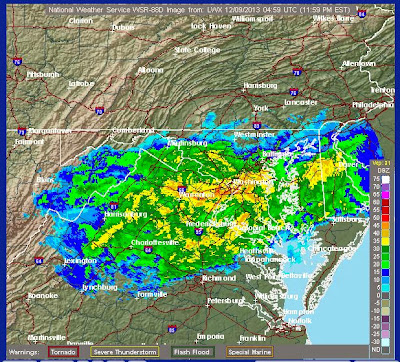 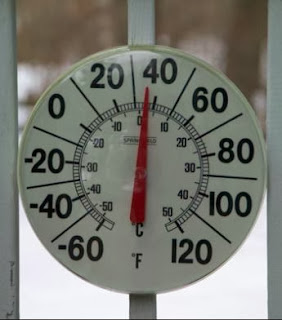 As for KCHO, it is at 32F with just a light "unknown" precipitation -- i.e., a foggy schnizzly mix.


There is about 1/8" to 1/4" ice on various surfaces such as tree branches, metal fences, cars that have not been driven all day, and street light poles even here in D.C. proper. Conditions are clearly much worse in the suburbs and exurbs.
The NWS -- that is, Sterling LWX -- expanded the winter storm warning to include the District of Columbia, Baltimore City / southern Baltimore County, Anne Arundel County, and Prince George's County with a winter weather advisory for Calvert and St. Mary's Counties. 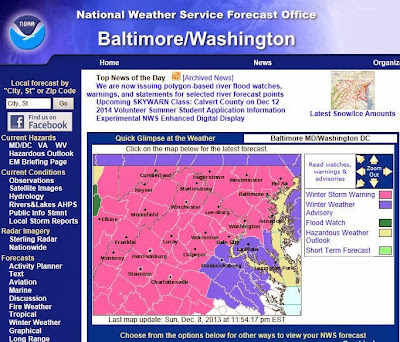 The Sterling (LWX) webpage showing the current advisories across its county warning area (CWA), updated 11:54PM December 8, 2013. The deep pink are winter storm warnings (for ice at this point) and the light purple are winter weather advisories.
*******


If it were about 3F to 5F colder area-wide, this would have been a major ice storm with tremendous disruptions into Monday and beyond. Fortunately, though, the surface / near surface air temperatures are just warm enough to preclude a massive ice storm, and instead it is a difficult nuisance with treacherous conditions -- but not a truly disastrous event, at least as far as I can tell. I will admit that it is always difficult to assess these things from the perspective of the "D.C. Bubble" around Dupont Circle. (As you know, I just wanted 6 inches of now.) 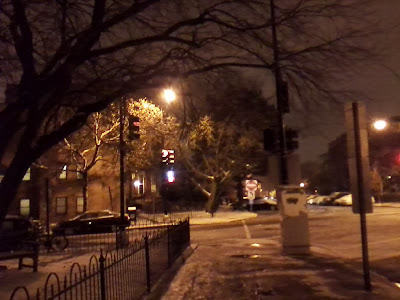 
Despite all of this, as of this posting and subject to change, OPM has announced that the Federal Government has a normal operating status for Monday (I'm a bit surprised at this, but whatever), or rather, it has not yet announced any closures or delays. I had imagined at least a delayed opening. A number of area (county) school systems are already closed including Loudoun, Fairfax, Fauquier, and Prince William County schools. 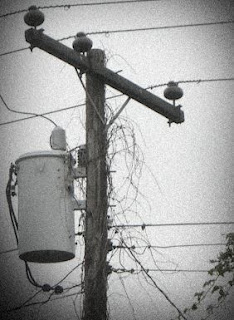 It appears that the situation is not too bad with a moderate number of power outages, in particular in Northern Virginia, though these do not seem likely to last for hours rather than days. There were also some weather-related traffic accidents, though no fatalities have been reported.


There are widespread school closures (in addition to the ones listed above, Montgomery and Howard Counties in Maryland and Arlington County, Virginia are also closed) and the Federal Gov't (see OPM link in above paragraph) is in fact opening two hours late with options for "telecommuting"  (which my computer, as a Federal contractor, is also offering).
Looking ahead, the weather event on Tuesday could be rather significant -- Sterling (LWX) now has 3 to 5 inches of snow mixed with sleet.
End Update.


Lastly, it looks as though another impulse will be swinging through the region on Tuesday with a good chance for accumulating snow, i.e., in the 2 to 4 inch range (possibly higher), here in the immediate D.C. area.  I will have more to say on that if the situation warrants. 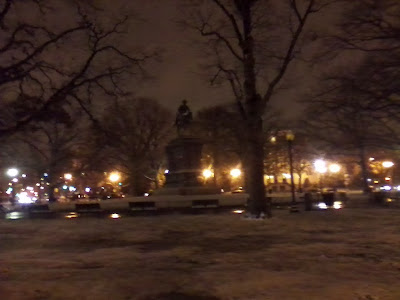 
Oh, yes, I meant to mention: The initial burst of snowfall on Sunday actually produced a veritable snowstorm in portions of northeastern Maryland, northern Delaware, and southeastern Pennsylvania with at least 6 inches falling in some places (significantly higher than the 1 to 3 inches forecasted). Wilmington, Del., (KILG) received 6.0 inches 8.5 inches (a daily record) and Philadelphia International Airport (KPHL) received 3.2 inches 8.6 inches (also a daily record). (Updated -- Sorry about that -- I only had the PRELIMINARY numbers and they were much lower.) 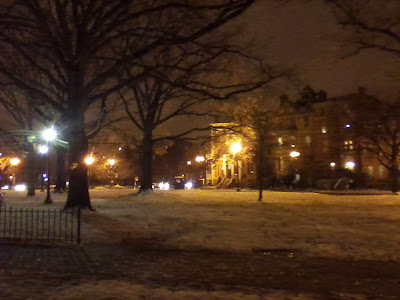 
As for my day, well, it never really got started. Instead, I left the apartment around 545PM and walked over to Nellie's, where I only stayed for a brief period (maybe 20 minutes). I then walked to No. 9 primarily via Vermont Avenue and Logan's Run Circle-- hence the photographs from tonight in this entry. I stayed for about 45 minutes and listened to bartender Jose tell a funny story to two other guys about his trip to Barcelona and on a cruise.
Thereafter, I walked in the gloppy, slushy night -- with my new galoshes on, and did they come in handy -- to Larry's Lounge, where I met Wendy. We went to Banana Leaves café, where Gary soon joined us. We have a really nice dinner, and thereafter went back to "La Lo" for some drinks (although Wendy went straight home). I then stayed there for about 2-1/2 hours and then came home, walking in the rain that re-started around 11PM.
Speaking of Wendy, she told me about her unusual Thanksgiving with her dad (who was visiting her from Southern California for almost a week). On "small business Saturday" after Thanksgiving (Nov. 30th), they went to Politics & Prose and guess who showed up ...? 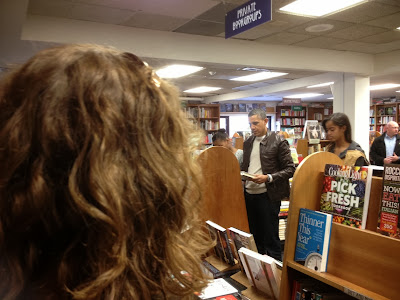 
Oh, yes, I invited Wendy to join Gary with my mom, Ray, and me on Christmas day in Annapolis. At this point, I THINK we are going to O'Brien's for reasons that I will explain in a subsequent entry.
OK, that's all for now. I intend to go to the gym tomorrow (Monday). (I never did make it to the gym on Sunday.) I may update the blog tomorrow night if only because of some D.C. gay mafia doings that need to be noted. 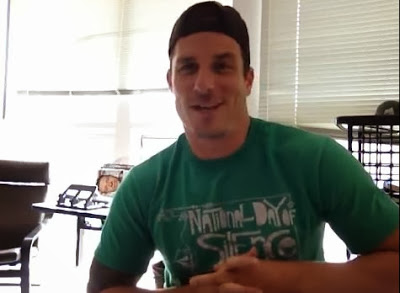 "Like, oh, my Gahwd! So, like, my boyfriend and I were at Rea-ghun Nashunal Airport on the stahrt of one of our fahbulous vah-cahys. He's a pilot, ya' know. Well, ahctually, not really. But we DO fly first class on all our trips to Lahs Vegahs. And Orlando. Who needs New Zealahnd when you have those two places?!" 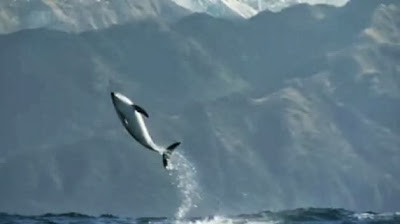