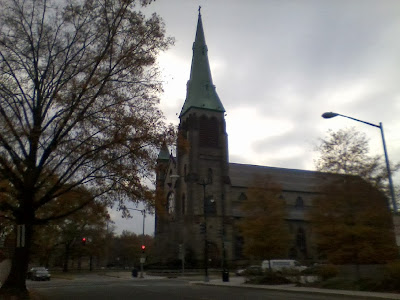 Exterior view of St. Dominic (or, alternatively, "St. Dominic's") Catholic Church in Washington, D.C.'s "forgotten" little quadrant of Southwest, 1:28PM December 4, 2013.
The old church is located literally on the side of I-395 and you can hear the dull roar of passing cars and trucks inside the peaceful space with its stained glass window panels telling Medieval stories and its high-vaulted ceiling.
There is a noon time mass and then it is open until about 2PM with just a scattering of usually strange people inside. (Catholic churches always attract nutty people, though they're usually harmless.) That's the best time to go because it is usually the most peaceful. 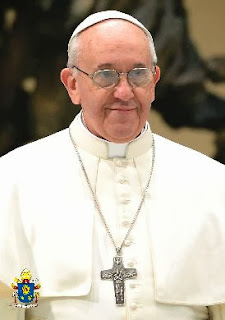 
On this topic, refer to the Andrew Sullivan piece to which I linked in my previous entry. 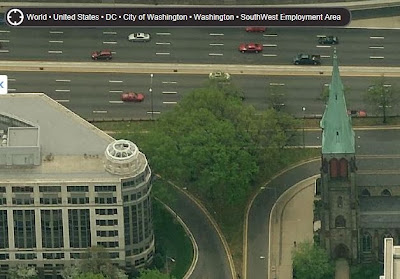 Bing bird's eye view of St. Dominic Church and I-395 next to it in Southwest Washington, D.C.
By the way, much like the Statue of Liberty, this church would look kinda awesome if its steeple were returned to its original copper bronze color.
*******


I walked over to St. Dominic on my lunch hour. The old church is located near L'Enfant Plaza (next to which is my office building) in Southwest D.C. Thereafter, I went to the Subway shop on School Street and ate my lunch in the atrium by the fountain in a building where I once worked many years ago.
As for St. Dominic Parish Catholic Church, I've talked about the church before -- even posting images of it on a number of occasions in the summer of 2010 shortly after I started my current job (you can search the blog if you're so inclined to find them). 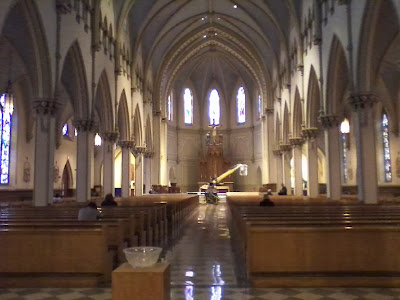 Interior of St. Dominic Catholic Church, Washington, D.C., 1:16PM December 4, 2013.
It was a weird thought for me to realize that the central Crucifix suspended on wires above the main altar has been there for so many years -- including the 3-1/2 years that I've been at my current job.
*******


The building where I had my lunch in the atrium is 400 Virginia Avenue SW. This is where I worked for a short period of time in 2002 when I was with the US CLIVAR organization.
That US CLIVAR turned out a big bust of a job given who I worked and headed it back at that time, and this was followed by the disastrous NASA Goddard astronomy writing one that ended abruptly in January 2004, an event that set me on my current course in life. 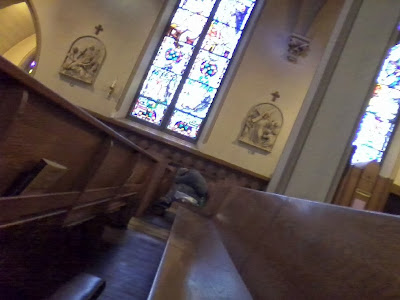 
Of note, the US CLIVAR organization -- which was co-located with the USGCRP-- moved together with it to a new location at 1717 Pennsylvania Avenue NW. (The USGCRP was headed at the time by a man named Dr. Richard Moss -- he was very serious and professional but also a really good guy, and he helped me a number of years later by doing an interview when I had that awful job in Bethesda.) Back in 2002, USGCRP was in the process of becoming the CCSP thanks to Bush regime efforts to defund and destroy climate science. In 2008, CCSP turned back into USGCRP. 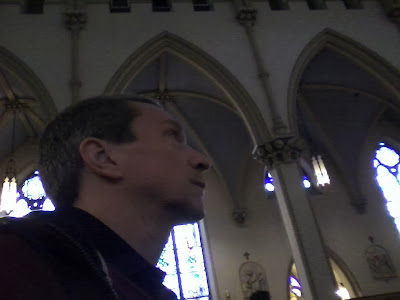 
My actual work day was fine. I am wrapping up the final edits on a series of approximately 10 cases involving approximately 30 small communities -- incorporated cities and counties -- around Texas. Once completed, this long-term larger assignment is concluded, which is also a bit worrisome in terms of billability. As a contractor, I live and die by billability. 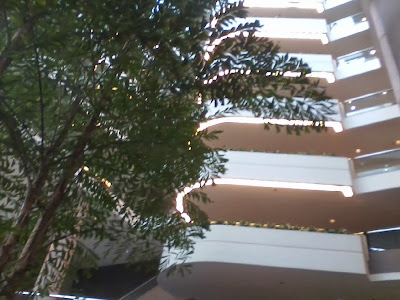 
As I write this*, I'm watching one of the two late night episodes of Maude on Antenna TV. The amount of screaming on that show was really amazing. Ditto The Jeffersons and All in the Family.  Having watched all of these shows back in the 1970s and 1980s as a small child and teenager, and having come from a family where there was much screaming, it made me think that was normal behavior. (*Actually, by the time I post this, it will be the ridiculously late hour of 2AM or so.) 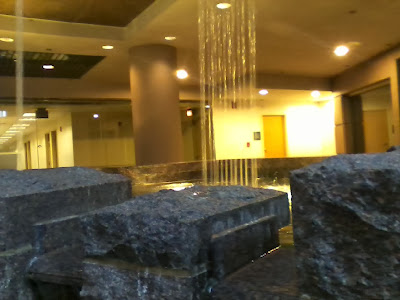 The fountain in the atrium of 400 Virginia Ave. SW, Washington, D.C., 1:37PM December 4, 2013.
The fountain includes three "serrated" waterfalls in which small individual streams of water that collectively form three "comb-like" waterfalls each plunge about 10 feet down but there are these pads that resemble large, flattened pieces of scouring pads that muffle the sound.
*******


I had a decent gym workout -- the usual jogging (about 5-1/2 miles in all over 1 hour including cool down); about an hour of light to moderate machine-based weight-lifting, and a half hour of swimming -- at the Anthony Bowen YMCA. I've pretty much shifted to the Anthony Bowen YMCA as a regular. I've only been to the National Capital YMCA about three times in the past month, and that is primarily for the big swimming pool. I may go there tomorrow, or if not, then next Tuesday. 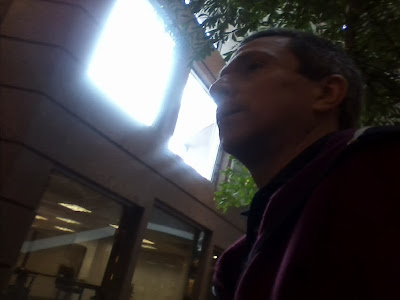 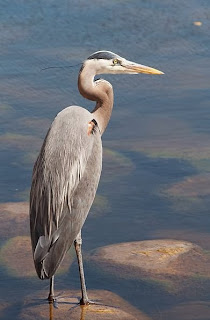 As for next Tuesday, I'll just skip my usual "date" at upstairs D-I-K bar. I really don't need the Jekyll and Hyde transformation that gyrates wildly in twin polar -- North Pole / South Pole -- fashion between apparent close friendship and dread-seeing-me loathing and mockery which, because I'm not deaf, I can actually hear. I think it was just easier when I didn't see him for the 2-3/4 years. No one needs to be treated like that.


I mean, I do have feelings, and it just sort of sucks to be treated in that manner. Of course, it is I who "pursue" any attempt at a "relationship" when I really should not.
The final "selfie" image of me for this entry, I promise ... 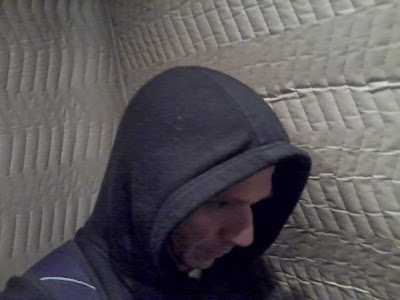 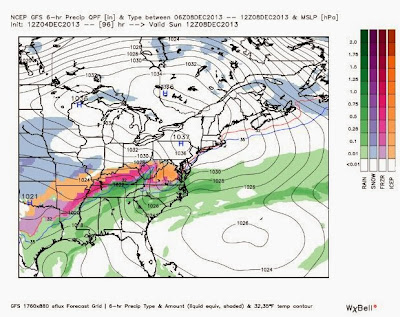 
Tonight is a softly overcast, cool (not cold) night with the possibility of some drizzle. The weather forecast for the next 5 days is rather active including two wet systems, one tomorrow night into Friday night and another Saturday night into Sunday night with the second one featuring a possible cold air damming / significant wintry precipitation event (snow to sleet and freezing rain before turning to all-rain) for the Washington and Baltimore Metro areas, in particular for the northern and western suburbs and out into the Shenandoah, Blue Ridge, and Potomac Highlands.
Thereafter, following a brief mild spell on Monday, it is forecasted to get quite cold with highs only near freezing next Wednesday and lows around 20F (and certainly colder in the suburbs and exurbs). 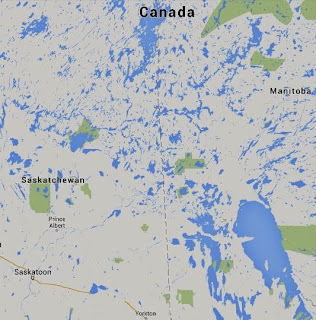 I was going to include a discussion about the Canadian Prairie Provinces, in particular, their bewildering glacial lake geomorphology, but let's save that for another entry such as you can see in this map of parts of Saskatchewan and Manitoba.


My next planned update will be on Friday night, though potentially it may not be until Saturday.
--Regulus
Posted by Regulus at 2:28 AM