(Not Quite My) Bar Fight / (But) Otherwise a Good Night 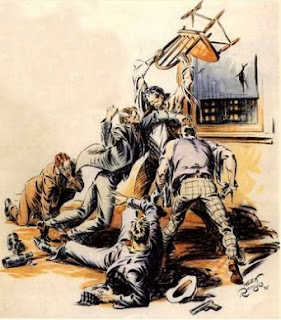 I was neither the reason nor direct cause (sorry to disappoint, D.C. Gay Mafia) but it was one that involved a good friend and one in which I ended up in the brief imbroglio. Police and then ambulance showed up, though no one actually needed the latter.


It got steadily more ugly and aggressive between the friend and another crazy guy until punches were thrown -- and the friend's sister (visiting from out of town) got punched in the face by this guy (not too hard, but still ... really??), at which point ALL HELL broke loose. (I don't think I've ever been in a bar fight -- not like that before.)

Within seconds, a glass of wine was thrown, a glass or two shattered and everybody was kind of in a pile on the floor. Oh, and somebody bit the guy on his clenched fist, which was just sort of sticking out in the air when my friend had him in a lock.
Oooh, and how people behave. 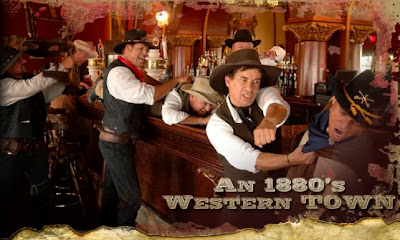 In the end, although the guy was quite strong, he was simply out-numbered and my friend is a boxer who can more than handle himself. At some point, it just ended and he walked outside right past me as I was calling 9-1-1. He could have severely whaled on me, but he didn't. Instead, he just sauntered off down Q Street.
Again, it was a SH!T SHOW.


It could have been worse in terms of violence and actual injury, but it never got to that point, and for that Thank You, God. 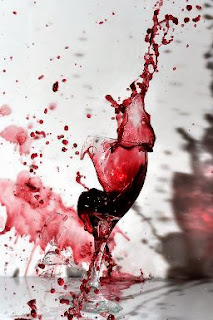 Nevertheless, at some point, a glass of wine was thrown / broken and went over everyone. My new sweater got red wine all over it. Worse, though, the shards of glass cut a number of people on their hands, though this too was not nearly as bad as it could of been.

Oh, yeah, the ambulance guy derisively laughed at me when I said I needed a Band-Aid. Well, I did.

Updated 8:40PM 12/28/2013: To clarify, what happened initially involved my friend and two other people -- one with an unresolved issue and another who jumped into the situation with a verbal stream of sexual filth. The guy was a lunatic. My friend's sister got hit when she tried to get between them. As for the red wine and blood, I guess that was sort of Catholic, was it not? At the end of the night, five of us compared hands and we each had some mild cuts.
End of update.


Now the funny thing is that earlier, I had had a completely and totally swell time with my bestie, AP. We went to dinner at Banana Leaves, and then went to D-I-K, where C/H was working, then to No. 9 (which really does shut down after 11PM on Friday nights and is NOT a sort of speakeasy), and finally to James Hoban. It was after J-H that I headed over the locale where the sh!t show subsequently happened.
I'm home now and going to bed, though I'm still riled up.
OK, time for bed. 'night. Tomorrow should be most definitely quieter.
--Regulus
Posted by Regulus at 4:16 AM