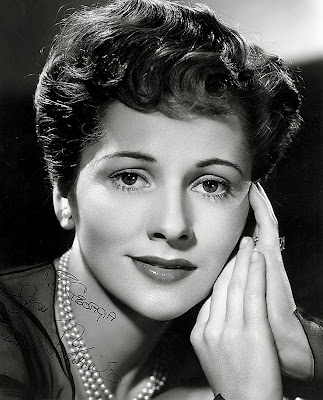 This entry is to note the passing of actress Joan Fontaine this past Sunday, Dec. 15th at age 96. She is the younger sister of actress Olivia de Havilland, who is still alive at age 97. It is my sense now that Ms. Fontaine is gone that Ms. de Havilland is the very last of the truly big name actresses of the 1930s - 1940s Hollywood Golden Age who is still alive (although I realize judging who is "big name" is a bit of a subjective determination).
*******


Here is her New York Times obituary (link here) but without inserted links.
Joan Fontaine, Who Won an Oscar for Hitchcock's "Suspicion," Dies at 96
By ANITA GATES
Published: December 15, 2013


Joan Fontaine, the patrician blond actress who rose to stardom as a haunted second wife in the Alfred Hitchcock film "Rebecca" in 1940 and won an Academy Award for her portrayal of a terrified newlywed in Hitchcock's "Suspicion," died at her home in Carmel, Calif., on Sunday. She was 96.
Her death was confirmed by her assistant, Susan Pfeiffer. 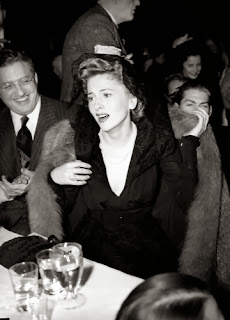 Ms. Fontaine was only 24 when she took home her Oscar in 1942, the youngest best-actress winner at the time, but her victory was equally notable because her older sister, Olivia de Havilland, was also a nominee that year. The sisters were estranged for most of their adult lives, a situation Ms. Fontaine once attributed to her having married and won an Oscar before Ms. de Havilland did.


Until the Hitchcock films, Ms. Fontaine's movie career had not looked promising. While Ms. de Havilland was starring opposite Errol Flynn in hits like "Captain Blood" and "The Adventures of Robin Hood" and captured the coveted role of Melanie Hamilton in “Gone With the Wind,” Ms. Fontaine struggled.
In 1937 and 1938, she made 10 mostly forgettable pictures, alternating between screwball comedies like "Maid's Night Out," in which she starred as a socialite mistaken for a servant, and dramas like "The Man Who Found Himself," in which she played a noble nurse determined to save a hobo’s life. 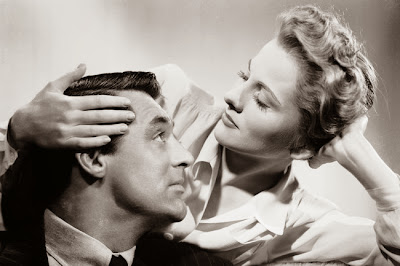 Joan Fontaine with Cary Grant in "Suspicion."
In 1939, she appeared in two critically acclaimed pictures. She was a minor player in "Gunga Din," with Cary Grant and Douglas Fairbanks Jr., but made an impression in the all-female ensemble cast of "The Women." Those roles were followed by her career-making performance in "Rebecca," which Frank S. Nugent praised in The New York Times as the film's "real surprise" and "greatest delight."
In the 1940s and '50s, Ms. Fontaine -- only slightly typecast as shy, aristocratic or both -- had a thriving movie career, starring opposite the era’s male superstars, including Burt Lancaster, Tyrone Power and James Stewart. 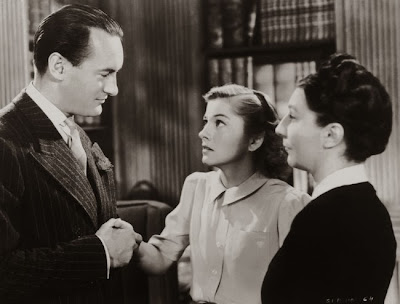 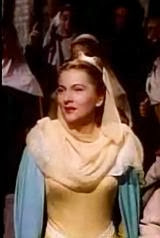 She played the title character in "Jane Eyre" (1944), opposite Orson Welles; a romantic obsessive in both "The Constant Nymph" (1943), for which she received an Oscar nomination, and Max Ophüls's "Letter From an Unknown Woman" (1948); the prim Lady Rowena in "Ivanhoe" (1952); and a British colonial in the Caribbean in the early race-relations drama "Island in the Sun" (1957). That film's mere suggestion of an interracial romance, between Ms. Fontaine's character and Harry Belafonte’s, was considered daring.


She made her Broadway debut in 1954, replacing Deborah Kerr as a headmaster's sensitive wife who helps a young man affirm his sexuality in "Tea and Sympathy." Brooks Atkinson, writing in The New York Times, preferred Ms. Kerr but called Ms. Fontaine’s performance "forceful and thoughtful" and her New York appearance "one of the better lend-lease deals with Hollywood."
She returned to Broadway once, in the late 1960s, replacing Julie Harris in the comedy "Forty Carats," about a middle-aged woman's romance with a younger man.
Joan de Beauvoir de Havilland was born to British parents on Oct. 22, 1917, in Tokyo, where her father, Walter, a cousin of the aviation pioneer Sir Geoffrey de Havilland, was working as a patent lawyer. In 1919, her mother, the former Lillian Ruse, moved with her two daughters to Saratoga, Calif., near San Francisco. The de Havillands divorced, and Lillian married George M. Fontaine, a department store executive, whose surname Joan later took as her stage name.
Ms. Fontaine, who also briefly used the name Joan Burfield (inspired by a Los Angeles street sign), moved back to Japan at 15 to live with her father and to attend the American School there. Returning in 1934, she soon moved to Los Angeles to pursue a film career. 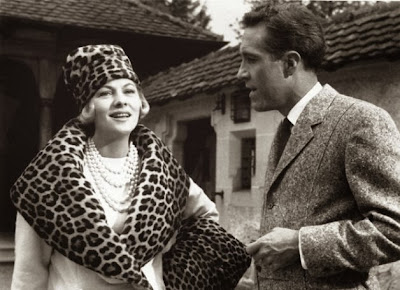 Joan Fontaine with Jason Robards in "Tender is the Night"
Her final big-screen roles were the heroine’s jaded older sister in "Tender Is the Night" (1962), based on the F. Scott Fitzgerald novel, and a terrified British schoolteacher in "The Devil's Own," a 1966 horror film.
Ms. Fontaine married and divorced four times. Her first husband was Brian Aherne, the British-born stage and film actor, whom she married in 1939 and divorced in 1945. She married William Dozier, a film producer, in 1946, and they had a daughter. After their divorce in 1951, she was married to Collier Young, a film and television writer-producer, from 1952 to 1961, and Alfred Wright Jr., a Sports Illustrated editor, from 1964 to 1969. 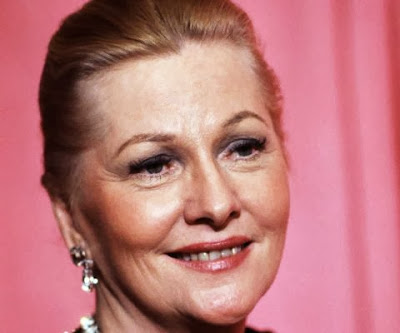 In 1952, she took in a 5-year-old Peruvian girl, Martita Pareja Calderon. When the girl ran away in her teens, Ms. Fontaine was unable to bring her home because she had never formally adopted the girl in the United States.
Ms. Fontaine is survived by her sister, Ms. de Havilland; a daughter, Deborah Dozier Potter of Santa Fe, N.M.; and a grandson. 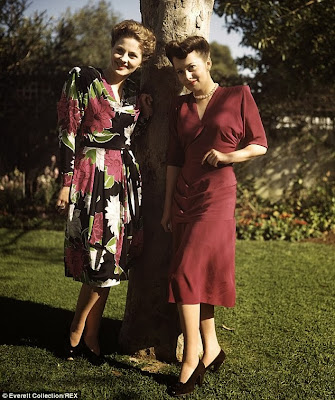 Here is a picture of Fontaine together with her sister, Olivia de Havilland. The date of this is uncertain but it looks 1960s-ish.
She continued acting well into her 70s. She appeared in television movies, including "The Users" (1978) and "Crossings" (1986), based on a Danielle Steel novel. A series of appearances on the soap opera "Ryan's Hope" in 1980 led to a Daytime Emmy nomination. Her final screen role was as a supportive royal grandmother in "Good King Wenceslas" (1994) on the Family Channel. She also did theater across the United States and abroad, but never returned to film. 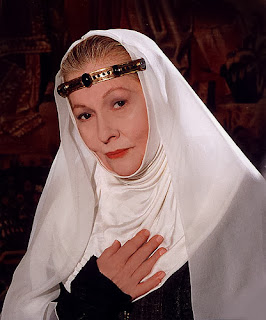 "Looking back on Hollywood, looking at it even today," Ms. Fontaine wrote in No Bed of Roses (Morrow, 1978), her autobiography, "I realize that one outstanding quality it possesses is not the lavishness, the perpetual sunshine, the golden opportunities, but fear." Just as "careers often begin by chance there," she observed, "they can evaporate just as quickly."


It is unclear if she ever reconciled with her sister, although it doesn't sound like she did. However, de Havilland issued a statement through her representative stating that she was "shocked and saddened" by the news.
--Regulus
Posted by Regulus at 11:58 PM