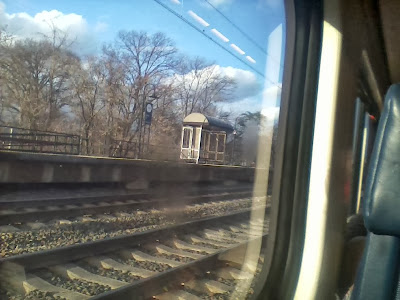 The MARC Penn Line and Amtrak line at the Odenton, Md., station stop; 3:03PM December 24, 2013. I think this is
** NOTE: This was my lead image but I incorrectly noted it as being in Prince George's County. It is actually the train spot in Odenton, Md., which is in Anne Arundel County ("Anny Runnell Kenny"). **
*******


Christmas Eve in Millersville, Md., where I have come for a very brief visit tonight to see my mom and Ray. I'm returning to my D.C. Bubble tomorrow after our planned dinner in Annapolis. Gary and Wendy are joining us, and I'll ride back with them. 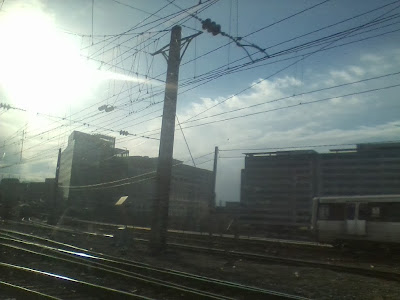 
We were going to go to O'Brien's but instead we are going to Pusser's Caribbean Grille. Yes, Pusser's.
I'm here in the back (or front) room of the little trailer off Veterans Highway in this 50s and over community. Ray is watchingTV in the other room, specifically, the 1977 movie Jesus of Nazareth. Wow, there's a lot of screaming and shrieking and violence in that movie. 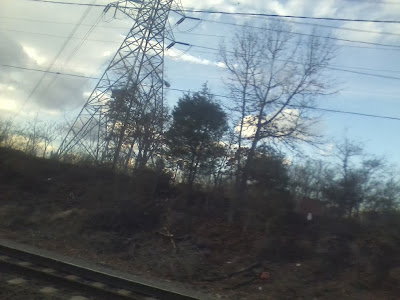 A view along the MARC Penn and Amtrak train line near Bowie, Md., deep in "suburban Maryland" somewhere right between Baltimore and Washington, D.C., 2:57PM December 24, 2013.
This is one of the high-tension wire towers that parallels the train tracks, which are also hemmed in by a tangled overgrowth of brush and forest. There are also these strange little houses with cluttered yards along this stretch of the tracks. They are very isolated sort that you tend to only see from the train. Also, there are a series of orange markers with black numbering that I first noticed at 956 that sequentially drop heading north (though sometimes there are "A" and "B" ones) that must mark the location of cables. By the time I got near Odenton, it was down into the 770s. I estimate each sign was about 200 feet apart.
******* 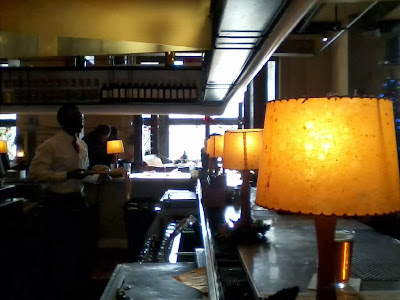 
I took the day off from work and rode an afternoon MARC Penn Line train from Union Station to BWI Rail Station. I had about 80 minutes to kill because there was no 1:20PM train, so I went to the bar at Thunder Grill and had a small lunch and two glasses of wine -- and a nice conversation with this large fellow seated next to me who scoffed down a large cheeseburger and fries. 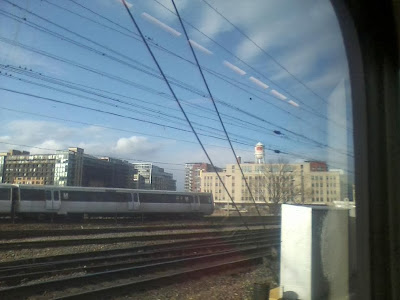 
The train was mobbed -- there must have been 2,000 or more people (I'm wildly guessing) on a quarter mile long train. I was able to get to the front of the crowd by going around the side entrance from the Metro station. The crowd was motionless, until a man in a MARC uniform driving a little cart said the track number had changed -- and the flood gates were opened. It looked like refugees fleeing the Wehrmacht. Given that every time I go to Union Station in the central hall, I feel like I'm back in 1942, I guess that makes sense. 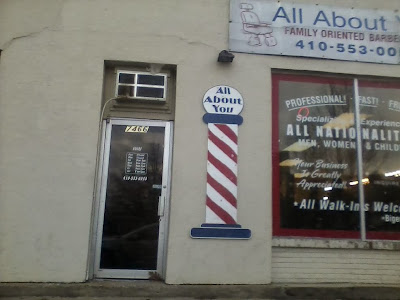 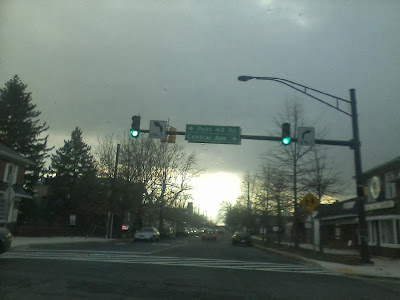 The intersection of Post 40 Road (to the left) and Central Avenue (to the right) along Baltimore - Annapolis (B&A) Blvd., Glen Burnie, Md., 3:35PM December 24, 2013 during a brief snowshower.
This location is the center point of the Glen Burnie street grid system (although the city Census Designated Place of Glen Burnie really has at least two grid systems with addresses along B&A Blvd. and Ritchie Highway and other main thoroughfares numbered out of Baltimore City (hence digits in the 7000s and 8000s). I wrote about this in a Christmas entry two years less two days but over 40 pounds ago.
Glen Burnie, Md. The Center of My Observable Moral Universe.
*******


I managed to get a seat toward the front of the train, and my mom picked me up at the station. There were some snow showers in the area with chaotic skies but it soon cleared up and it was just blustery cold with temps near freezing. We went to the Marley Station Mall, where I had not bee in at least a decade and probably more like 12 to 15 years. I got two shirts on big discount at Macy's and we had a cup of cofee. 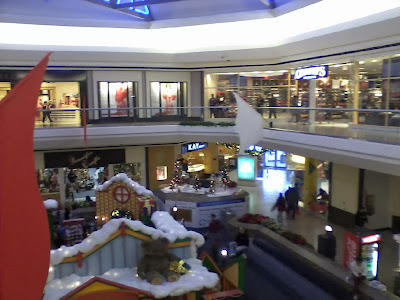 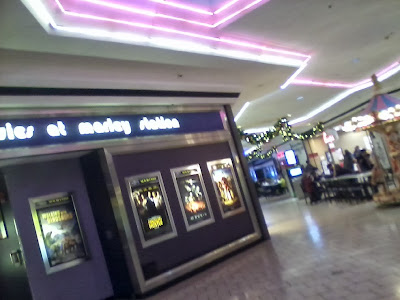 
I think tonight we're going to this nearby non-demoninational church and then to a dinner -- either to the Honeybee in old Glen Burnie or the Double T along Ritchie Highway.
Updated 11:10PM 12/24/2013:


So we ended up going to Glory Days, a restaurant near the Double T diner, which had actually closed at 8PM. This followed about 80 minutes at a Christmas Eve service at this church along Elvaton Road in Millersville.
My cousin Betty Ann called me tonight to give me some sad news: My great uncle Freddie Acerra has died. This means that only Uncle Eddie and Aunt Babe remain of the original sprawling Acerra clan that included my late grandmother, Florence Acerra Todaro (who died in 1988). The funeral is in Long Branch, N.J. (at, I imagine, Damiano -- all life roads end at Damiano). I don't think I'm going to be able to make it there, but I'll call up his daughter, my second cousin Donna, tomorrow.
As for Aunt Babe, she is doing quite well as a spry nearly 101 years old. (Remember I went to her 100th birthday party last January in Long Branch.) 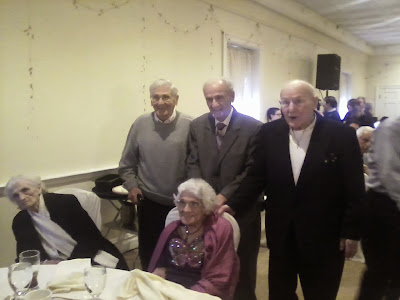 This is a picture of the four Acerra children at the birthday party on Jan. 27, 2013. The guest of honor, Aunt Babe is seated in the middle and Uncles Freddie, Eddie, and Richard ("Bubby") are behind her left to right. Both Freddie and Bubby have passed away since this picture was taken. (That's my Aunt Tessie, on the lower right. She was married to one of the other uncles who died some time ago. She was not in very good shape.)
As for Aunt Babe, she is in Hawaii with Betty Ann (her daughter) and Richard (her son-in-law). They spend several months of the year there. In fact, Betty Ann sent me this awesome picture of Aunt Babe: 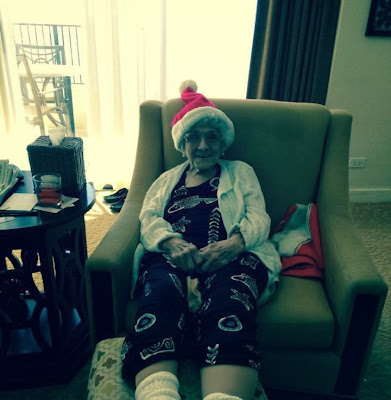 My great Aunt Babe in Honolulu, Hawaii celebrates Christmas Eve 2013. Aunt Babe was born in January 1913, so this is the 101st Christmas she has celebrated. Awesome.
*******


OK, that's all for now. I'm really backed on blog entries and pictures that I would like to post.
I'm going to end this entry now but with a second awesome picture that Betty Ann sent me along with caption she included. Please note it is 26F outside at nearby BWI Airport with a blustery northwesterly wind as I post this image. 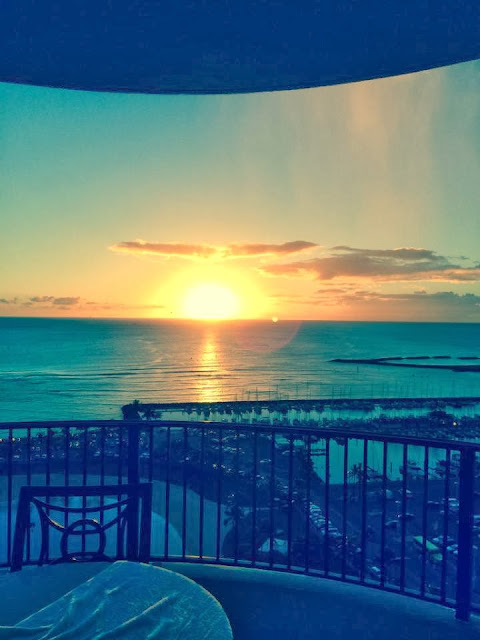 "Sunset from our lanai."
This is the view from outside her place near Waikiki in Honolulu, Hawaii, Christmas Eve 2013.
Merry Christmas.