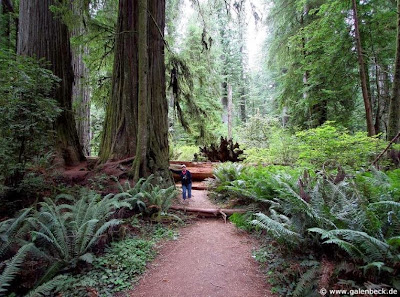 The Jedediah Smith Redwoods State Park in California in early spring 2010. Image by Galenbeck.de as posted on Panoramio here.
*******


Well, I had intended to post a lengthier entry tonight but I'm depressed and tired and worried about my work billability status for the next two days and then for early 2014. As I mentioned, I'm a Federal contractor and live and die by being billable. Yet oddly enough I have something due at noon tomorrow, and should in theory stay up tonight into the wee hours to complete it. But I'm so damn tired. 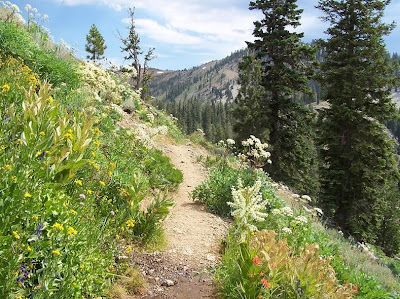 
I really don't want to have to go through the process of looking for another job. That would be agonizing.
Maybe I can ask Pitty Shill, a.k.a., Wall-P, to give me advice. Of course, this requires an appointment six weeks in advance with secretaries and, most importantly, permission from The Staff to talk on the phone for five minutes.* This is what it means to be a combo corporate tool and married buccal-pumping frog sitting astride that 40-room off-white lily pad (all IKEA furnishings, plasma screen TVs, massive seashells torn from distance tropical oceans for the purpose of online purchase by rich Westerners, culturally wholly incongruous African wooden face masks adorning a staircase, and nothing of actual valuable meaning). And the advice, such as it is, would be all wrong and inappropriate for your situation, and you'd come away feeling worse, a little part of your soul having died. 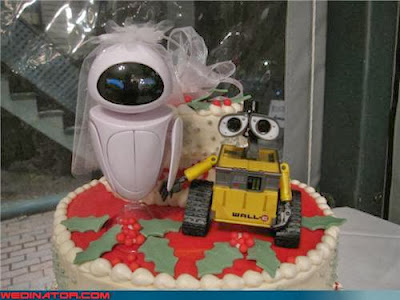 Wall-P at its wedding to The Staff.
*You see, the way it works is The Staff gives daily instructions and directives that contain a set of allowable opinions, not to mention names of people with whom it is permitted to socialize. Wall-P's programming interprets all of these as its own views -- not to mention Obvious Truths to be spouted in rapid, monotonic fashion ("Eh. Eh. Eheheh. This proves yet again the superiority of my mind and methods --"). And when it comes to obsession with money (as in amassing vast amounts of it), endless client-and-posterior-focused corporate legal stoogery, and zero-dimensional spirituality, well, those qualities are always permitted.
*******


I had a meh gym workout. I got in the damn 5-1/2 mile jog -- the frickin' internet is still out on all the Life Fitness machines (even the icon is gone, though it is supposed to be fixed at some point) at the Anthony Bowen YMCA, meaning I lose my one chance every other day to look at StatCounter (which I just can't from my computer). 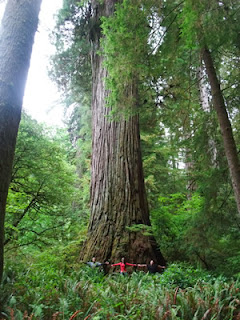 I spent about half the time "on" the Trinity Run through Shasta-Trinity National Forest wilderness (what a great name), the Gold Bluffs Beach, the Siskiyou mountain wilderness, and the marvelous Jedediah (Jedediah?) Smith Redwoods State Park in California.


It is there that you may find the "hidden" Grove of Titans. This refers to a collection of ten or so massive Redwoods that are among the largest trees on Planet Earth. They are awesome in the truest sense of that word. 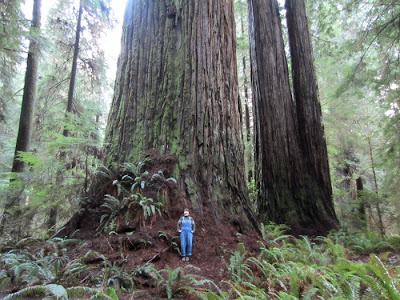 The Grove of Titans at the Jedediah Smith Redwoods State Park near Crescent City, Calif.
Two interesting items: First, apparently, the exact location of the Grove of Titans has not been publicly disclosed since they were "found" in 1998. Secondly, in the movie Return of the Jedi, the scenes on the forest moon of Endor were partially filmed in this park. 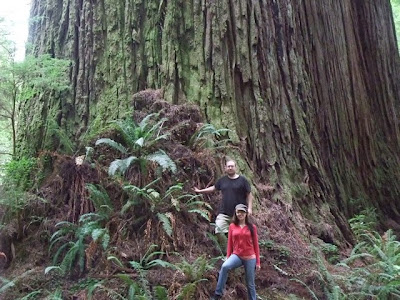 
The rest of this entry contains some snowy and not-so-snowy pictures from the past four days. 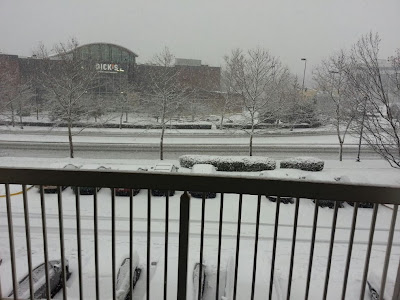 
But I couldn't do much machine weight-lifting even though I nominally spent 50 minutes do it. And I skipped the swim. Then I came home and made my usual dinner, and here I am just blogging and watching TV (right now another scream-fest old rerun of Maude on Antenna TV. Thereafter are two episodes of I Dream of Jeannie and two episodes of Bewitched by which time it is really late. 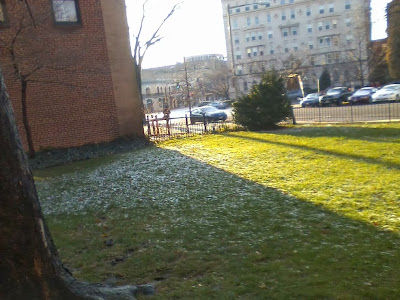 
Oh, and I just look awful. I look like a weird leprechaun. And I've almost certainly "plateaued" in terms of weight loss and probably even putting on some muscle mass. It's not that I want to lose more weight beyond the 40 to 45 pounds (net versus fat loss) I have already lost but instead I just don't like the remaining flabby blog in my middle (even if it is no longer really visible when I'm fully dressed).
All in all, I'm kinda miserable tonight. 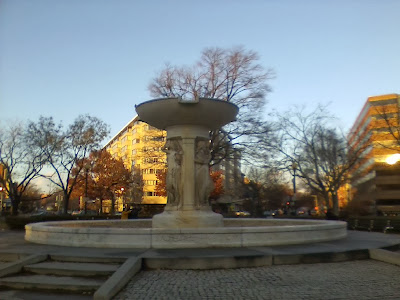 Deep No snow at Dupont Circle's central fountain, Washington, D.C., 3:56PM December 10, 2013.
The city appeared kind of abandoned at this point, at least this area where it's normally bustling. I walked over to James Hoban for an early dinner and then went to meet AP and company at a TNDC event held in Adams-Morgan at The Blaguard.
*******


Re. my planned weather update, Jason Samenow made a very good point in this Capital Weather Gang (CWG) blog entry "A half-right, half-wrong snow forecast, and how we can improve" about just looking at the temperature and dew point before a forecasted snow event. (I linked to this entry in my previous entry.)

The NAM model temperatures versus actual temperatures at KDCA (Reagan National Airport climate station) for six hour increments including 7PM Monday on Dec. 9, 2013 and 1AM Tuesday, 7AM Tuesday, and 7PM Tuesday on December 10, 2013. Note the 2F to 6F difference.
This elevated temperature -- the 2 to 6F higher than the flippin' models forecasted -- may have been due to or associated with the fog the night before since the fog is presumably releasing latent heat. 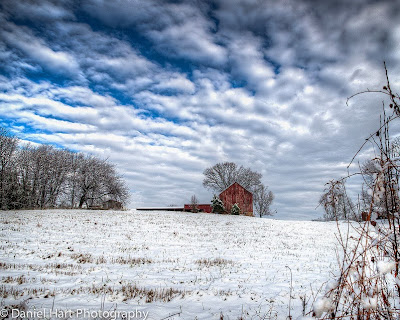 
There was another entry on CWG "December winter storm duo provides plentiful D.C. area photo opportunities" by Ian Livingston and Kevin Ambrose featuring wonderful snowy pictures from around the region including in places that had accumulating snow. 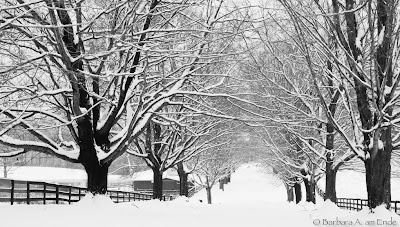 
I'm going to try to go to the gym again tomorrow -- except the National Capital YMCA -- as I want to go into the large swimming pool. I do not intend to update the blog tomorrow night (I'm not even planning on taking the computer home). My next update will either be on Friday night or Saturday during the day. 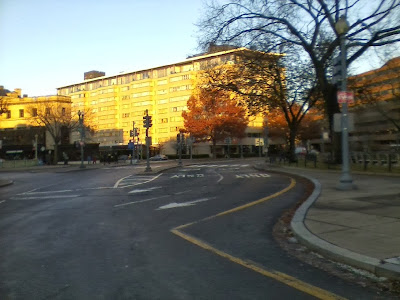 
OK, that's all for now. Oh, yes, I think I'm going to add "Jedediah" as my second middle name, or if I ever get right with the Catholic Church, my confirmation name.
-- "Jedediah" Regulus
Posted by Regulus at 2:00 AM