Under the Afternoon Mackerel Sky and by the Navigation Lights of the Washington Monument -OR- To Virginia, New Jersey, and Back Again 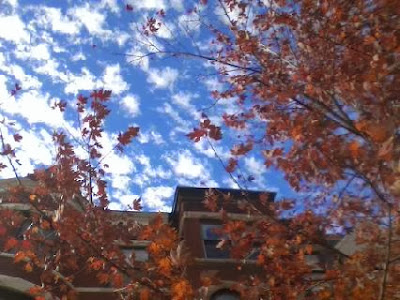 There was quite a stunning altocumulus "mackerel sky" cloud display over Washington, D.C., and environs early Wednesday afternoon. This is the view from 15th and U Streets NW, Washington, D.C., 1:44PM Nov. 6, 2013. It was a rather mild day with temps reaching about 68F. (Of note, the other type of mackerel sky involves cirrocumulus clouds. I'm fairly certain this was an altocumulus one though sometimes it is hard to tell.)
*******


Not really much to write about tonight. I made it to the gym this evening -- again, to the Anthony Bowen YMCA rather than my regular National Capital YMCA. 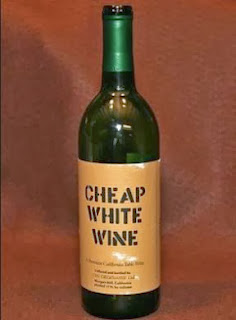 I only worked a half day today because last night, I way overdid it at my Dupont Italian Kitchen (D-I-K) bar "happy hour" where Chris H. was working. My poison last night was white wine rather than my usual vodka soda with a lemon and lime. In short, I just can't really drink white wine and not get a crushing headache and next day hangover.


More generally, though I have tried so many times, I just can't "do" wine -- white or red. The only exception is chianti and the occasional merlot. 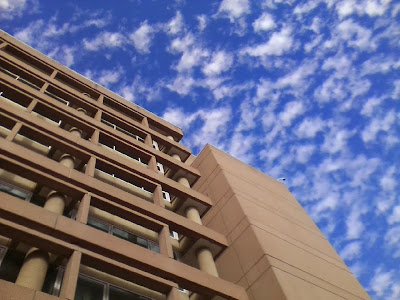 Another view of the altocumulus mackerel sky cloud display as seen above the Frank Reeves Center along U Street NW, Washington, D.C., 1:46PM Nov. 6, 2013.
(This building is rapidly becoming an anachronistic eyesore amid the frenetic gentrification and building boom in this part of Shaw / U Street Corridor. At night, its fortress like structure with lots of nooks makes it a ready-made outdoor homeless shelter. It scream Marion Barry, 1986. His name is even on the building.)
*******


Anyway, I didn't get into work until about 215PM and only worked about 4 hours. I also felt awful as I left work, but I still went to the gym and ended up having a reasonably good workout including 5 mile jog and some weight-lifting. The pool was particularly nice and I stayed in it for about 45 minutes.
If I walk via New Hampshire Avenue and W Street, the trek to and from the gym is only about 6 minutes -- substantially closer than the National Capital YMCA. 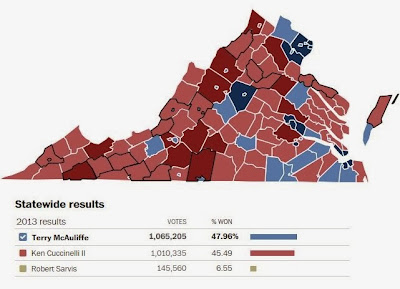 2013 Virginia gubernatorial race results by county.
As a follow-up, the corporate Democratic water boy Terry McAuliffe won the Virginia gubernatorial race over the far right Teabagger Ken Cuccinelli -- he who wants cameras and probes up every woman's [BLEEP] -- but the margin of victory was only 2.5 percentage points 47.96 to 45.49 percent while some other guy (a nutty libertarian named Robert Sarvis) got 6.55 percent out of 2.22 million votes cast. You can read the WaHoPo's after-the-fact auto-political-arousal piece about why that was here. In short, Republicans inherently can do no wrong and are the "natural" Masters of the Universe, and only lose by strange and unrepeatable circumstances.
Apparently, this result also keeps the GOP internal civil war going since the Teabaggers WEREN'T routed. (Say, I wonder how "Baby" M-WADE's family relations voted in the Old Commonwealth. Actually, I'm not.) 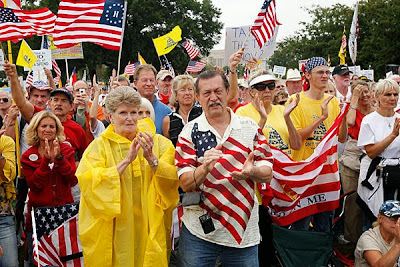 The fact that creepy Cuccinelli would win even that much of the female, to say nothing of poor coal country, vote tells me that politics has nothing to do with actual rational calculations. (FYI: Cuccinelli was actually born in New Jersey.)
But McAuliffe won and a win is still a win -- unless you're Cokie Roberts and George Will "analyzing" why every Democratic win is really a loss.
Speaking of New Jersey ... 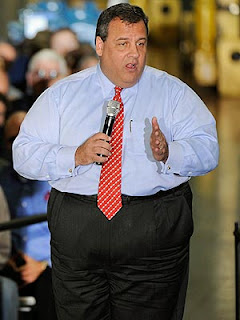 It was there in my home state that the ginormous Gov. Chris Christie won a ginormous reelection victory over the hapless state Sen. Barbara Buono with 60% of the vote.

It goes without saying that Hurricane Sandy was the best thing that ever happened to that man, and he handled it very well.


Christie is now being considered, however improbably, the 2016 GOP frontrunner, although the inestimable Jonathan Chait had a good cautionary piece on this topic: Four Problems With Chris Christie 2016. 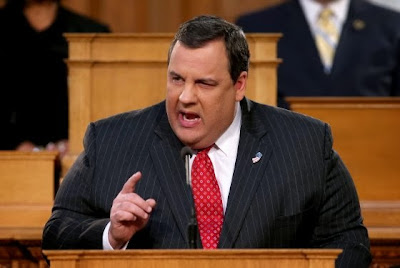 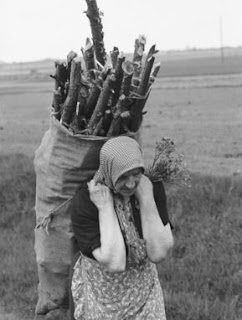 My weird and unhappy and deeply conservative uncle in South Amboy must be thrilled -- or at least as thrilled as a miserable Polish person can be.

Kinda like this lady, except she probably had a real reason to be miserable.

As it is, Dems today appeared to begin a rear-guard action against Gov. Christie. 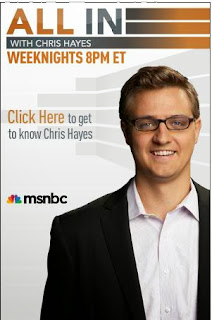 On this topic of Dems turning their fire on Chris Christie ahead of his likely 2016 presidential run, the unwatchable Chris Hayes had an unwatchable piece on his unwatchable show All In, as I saw while on the treadmill at the gym.

I just wasn't in the mood to be whipped up into a frenzy of Chris Christie hatred by a bunch of ultra-PC and deeply annoying and self-righteous liberals such as Chris Hayes.


Oh, yes, in Alabama the Teabagger Republican lost in a Congressional primary to the business establishment one -- or at least that is the mainstream media narrative, but who really knows. And I don't really care. Alabama is its own world, its own reality, and (unlike a comparable event in the far bigger and much more complex state of Texas) I draw no "lessons" from it.
For a variety of reasons, this northern gay social democratic liberal genuinely likes Texas. I don't like Alabama.
****** 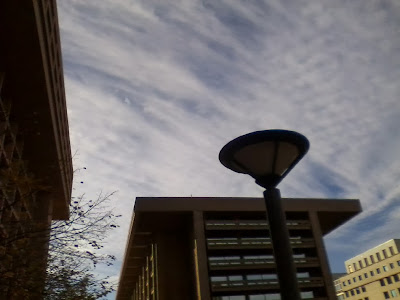 
Turning to the weather, the GFS model is showing a potential storm event for the mid-Atlantic in the middle of next week, and even with temperatures marginal for frozen rather than liquid precip. However, I am in NO MOOD to start playing this game this far out. Instead, I refer you to the Capital Weeny Weather Gang's discussion of the matter earlier on Wednesday. 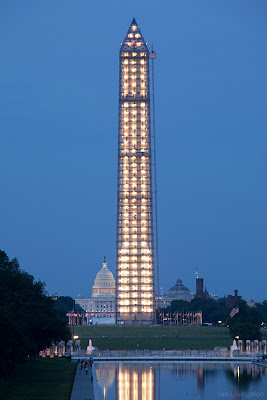 Finally, I want to note something I observed last night and really noticed tonight. Last night, I noticed that the four pairs of red navigation lights on each side of the Washington Monument were visible -- and blinking in a much slower fashion.

Left: A picture by CWG's Ian Livingston of the Washington Monument last July as the exterior decorative lights on the scaffolding were first illuminated.


The exterior lights during the restoration work have now been turned off and are being removed, as was the scrim on the top (pyramidal) part of it. However, last night, the four temporary red lights (one on each side, all blinking in unison with respect to each other but not the permanent ones) were still flashing. This was the first time it was possible to both sets of lights since -- in effect, three on each side -- since the placement of the scrim covered up the permanent ones). Tonight, the temporarily lights were out or even removed -- and it is possible to see the permanent lights very clearly with their new slower frequency blink. Though they still blink in unison -- something that has happened since a synchronizer was installed in February 1995 -- the slower blink it more appealing and less jarring. Now it is possible this is just temporary and they will go back to that quicker blink. (Of note, they are not LEDs, or do not appear to be.)
OK, I think that's all for now.


It appears that the Washington Monument's four pairs of red navigation lights are back to their usual winking frequency, so no changes. So that's that. I noticed this last night looking down 16th Street NW. (Also, on a tangentially related noted, apparently the FAA has not approved LEDs for use in warning navigation lights. I wonder if this might explain why the lights on the Hughes Memorial Tower of late have reverted back to a regular daytime strobe mode.) 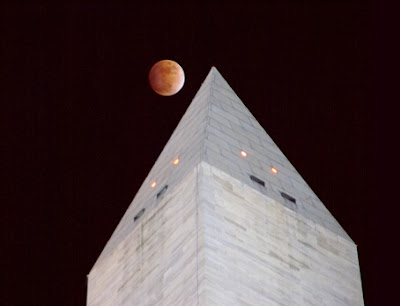 The top of the Washington Monument with two of its four pairs of top warning navigation lights as seen during a lunar eclipse on February 21, 2008.
End of update. 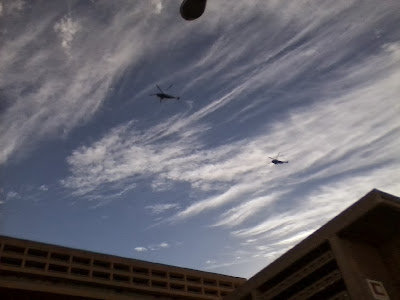 
While writing this, I have been watching Antenna TV -- a rather funny early episode of I Dream of Jeannie called "G.I. Jeannie" where she joins the old W.A.F. Of note, The Golden Girls will not be on Hallmark for at least the next two months as the network is in its Christmas movie mode. But as Gary texted me earlier, we may not have The Golden Girls to ease our way into bed at night, but we have Delilah on the radio, and I have all these old shows on Antenna TV and Me TV.
OK, that really is all for now. My next planned update will either be at some point on Friday.