**Owing to formatting issues and lack of a mouse, as well as amount of time, this entry contains only a handful of pictures.** 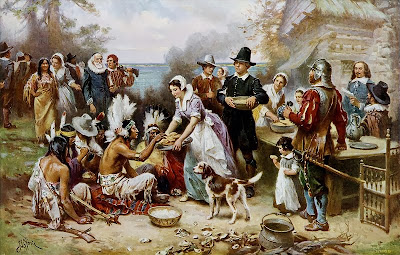 
Thanksgiving morning somewhere in Anne Arundel County, Marlyand (or in the local dialect, "Anny Runnell Kenny, Merlin") -- specifically, the Census Designated Non-Place of Millersville not far from BWI Airport and Glen Burnie. (Actually, only Annapolis and the fly-speck place of Highland Beach are incorporated cities in Anne Arundel County. The rest are either CDPs or just, like Millersville, just nebulous areas with no particular designation.) I'm at my mom and Ray's place in the over-55's (waist size) trailer park in the back room (or rather, the front room, based on the lay out).
I am using one of their computers to compose this entry. Of note, they have far more computer technology and related awareness -- two lap tops, Kindle and Kindle Fire HD tablets, Samsung Galaxies, WiFi, satellite cable for the large plasma screen TV, digital cameras, and other stuff -- than I do. 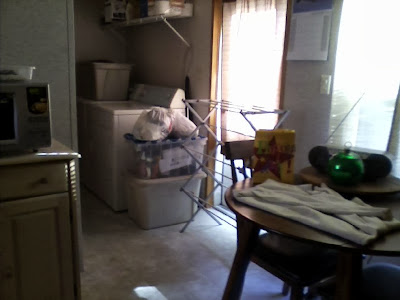 Actually, the place is kind of cozy in its way, albeit extremely small and there is only one bathroom (on the other side outside their bedroom). And it is much too isolated for my city sensibilities / lifestyle / paradigm. Above above is a picture of the kitchen and laundry area. But they really seem to like it -- have been here now for a decade, longer than any other place in or near Glen Burnie since we moved here 22 32 years ago tomorrow (Nov. 29, 1981) just days after my 12th birthday. (To clarify, we moved to Maryland on that day from Texas. We stayed in Baltimore at Ray's parents' house in a disastrous situation for a few months. I went to live with my dad and grandparents in New Jersey in Jan. 1982 while my mom and Ray moved to Glen Burnie in March or April 1982. I didn't actually move to Glen Burnie, Md., until Aug. 1982. I moved to College Park to UMCP in Sept. 1992 (detouring in the intervening years to New Jersey, Seattle, Wash., St. Mary's County, Md., Rockville, Md., and back to New Jersey). I didn't move into D.C. proper until Feb. 2001 (and have been there continuously with a 9-month interlude in Silver Spring in 2004 / early 2005). The last time I actually lived in this area was in the summer of 1995. Ray and my mom remained in Glen Burnie (in various places) until about 2003, when they moved to this place in Millersville. I occasionally visit.
I'm only about 30 miles "as the crow flies" from where I live in D.C., but it might as well be a different world.
They are in the other room watching the Macy's Thankgiving parade. The TV is seldom not on. At least Ray doesn't have Fox News on right now. There was one mention of Obamacare but I didn't reply. Oh, and my mom showed me her new Medicare card. Ray seems to be doing better -- he has had no end of health problems, at least one of which is directly attributable to his time as a young man in the Vietnam conflict so many decades ago.
It was a somewhat chaotic getting here last night through a frenetically mobbed Union Station as the MARC Camden Line train I wanted was once again cancelled before a holiday, and it appeared that MARC Penn Lines were being cancelled. I took the one getting ready to leave and went straight to BWI Thurgood Marshall Rail Station stop, which is actually rather close to here (I was going to ride up to Baltimore / Camden Yards and take the MTA Light Rail and meet them at 730PM, but the way I did it, I was almost 90 minutes early.) 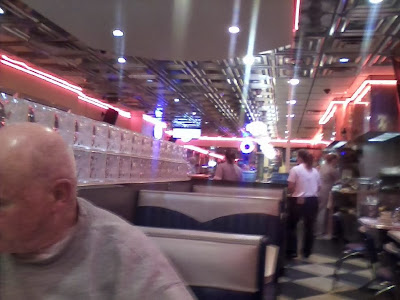 After I arrived, we went to the Honey Bee diner in Glen Burnie and had some dinner. Above is a picture from the inside of the Honey Bee (that's Ray in the image).
That rail station was once barely more than a clearing in the woods back in the mid-1980s. Now it is an ever-more sprawling transportation complex. It was quite crowded last night with MARC, regular Amtrak, and Acela trains -- one of which exploded by on the central track at well over 100MPH, probably more like 120MPH.
It was a blustery, cold night with scattered snow flurries following the heavy rainfall from the nor'easter. The numbers I posted yesterday for the NWS regional climate stations including KDCA, KBWI, and KIAD were more or less correct and common, though there may have been a few hundredths of an inch more of precip. I may go back and update the numbers in my previous entry. Those numbers were also quite common from weather observers regionwide. Snowfall totals were just "trace" with a few higher amounts far to the west in the Blue Ridge, Potomac Highlands, and along the Allegheny Front. The highest snowfall number on the LWX page I found was 3.5" at Bayard, W.Va., but even that was an outlier for its area. 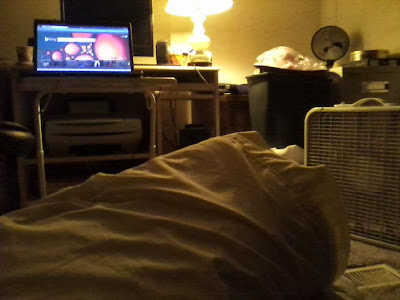 I slept on the thickly carpeted floor in the back (front) room last night (see above image) with a box fan on low-medium and managed to get a turbulent dream-filled seven hours of sleep that included dreams of horses, a dalmatian dog biting me on the back of the neck, vibrant outdoor greenery, screaming in a bathroom mirror as turquoise blue water overflowed a sink, and flying around a place that might have been L'Enfant Plaza, except it was in a tropical island kind of place. Oh, and something about a Nellie's bartender that I won't go into right now.
Today is a sunny, rather cold day for late November with air temps right now in the 32F to 34F range.
I brought that absurdly out-of-date will and last testament that my father bizarrely sent me with the wholly out-of-context (indeed, almost random) package that I discussed in this entry. I did so in order that she could look at it (she works at a law firm in Severna Park and deals with wills all the time).
OK, so I don't have a lot of time to write as we are supposed to go to a Thanksgiving dinner at an American Legion hall on Kent Island, and it is rather early (1230PM). Furthermore, it will take me forever to get ready in that small bathroom with the awkward shower. At this point, I'm probably going to skip showering and shaving. It will just take too long.
Updated (before posting): I got them to push back the time we are leaving until 130PM. If the Kent Island thing doesn't work out, we'll go elsewhere.
Updated 140PM: OK, so because we wouldn't make the Kent Island plan by 12:03PM, it was nixed and we are going to try to go to the Severna Park American Legion hall for a comparable event but at $7 per person. At this rate, we may end up back at the Honey Bee. 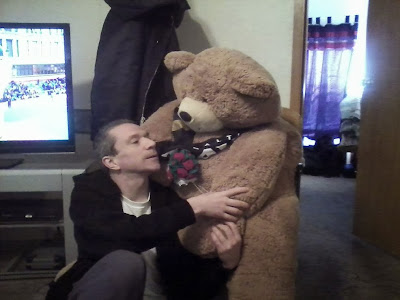 Yours truly with a giant stuffed teddy bear that Ray got my mom last year.
Finally, I am going to have to work on one of my two work assignments for a few hours tomorrow from here. As I mentioned, I return back to D.C. on Saturday but my weekend -- esp. Sunday -- is going to be busy with another work assignment from home.
Oh, yes, so today is Thanksgiving AND the first day of Hanukkah -- a fact that happened once in the late 19th Century but supposedly will not happen again for 78,000 years (when the human race will likely still exist in some form but not any of our present-day religions). Now how in the world is that possible? I just don't believe that.
And that really is all for now.