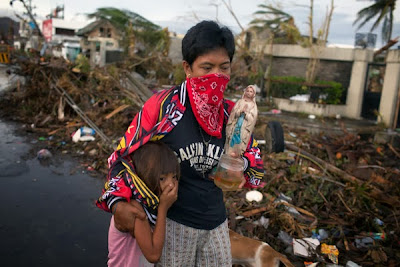 A man walks closely with a frightened little girl while carrying statue of the Virgin Mary through the devastation of Tacloban, the stench of dead bodies in the air, in the wake of Typhoon Haiyan
This entry contains photographs and an update on the situation in the central Philippines in the aftermath of Super Typhoon Haiyan (or "Yolanda" as the Philippines government called it). The photographs and the extended article excerpt are taken from The New York Times online as well as a few other sources. The pictures were all taken in the past few days though I don't have exact dates. 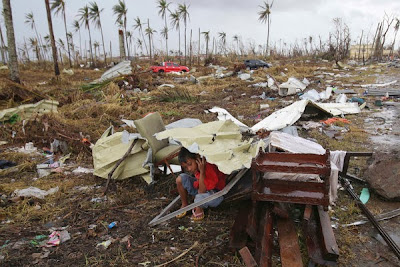 A small child crouches among the wreckage of a house in Tacloban in the aftermath of Typhoon Haiyan.
*******


Let me just say upfront that I can't believe any of the initial reporting suggested that the situation "wasn't so bad" -- or that I foolishly believed it in my Update 1 to this entry. Believing it on my part was along the lines of Dudley Do-Right's famously and foolishly self-deluded adage, "IF IT'S IN THE PAPERS, IT MUST BE TRUE!" (At least I think it was Dudley Do-Right -- I can't see to find a source for the quote, though.) 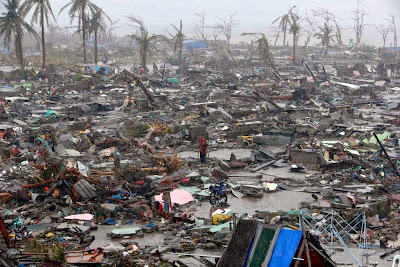 
The situation in certain places such as the city of Tacloban basically are as if a tsunami had hit -- because in some sense, this is for all intents and purposes what happened. The death toll could easily be 10,000 and at least 4 million people have been affected across the sprawling archipelago.
Let me just quote the first six paragraphs of this New York Times story:
TACLOBAN, the Philippines -- Increasingly desperate survivors of Typhoon Haiyan mobbed the shattered airport here on Tuesday, begging for food, water or a flight to escape the chaotic aftermath of the storm, which flattened this city of 220,000 last week and ravaged vast swaths of the country's midsection. 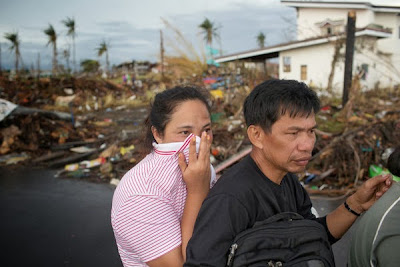 Two survivors walk through the wreckage of Tacloban, the stench of death in the air, in the aftermath of Typhoon Haiyan.
*******


Even as an enormous global aid effort gathered momentum and relief supplies began trickling in to the airport here and elsewhere, officials did not have a full grasp of the magnitude of the devastation and could provide no guidance on when basic emergency needs could be met. 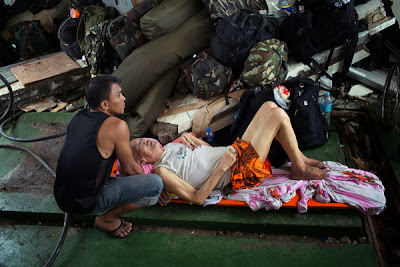 A sick and injured man is comforted by another amid the wreckage left by Typhoon Haiyan in the Philippines.
*******


While President Benigno S. Aquino III suggested in a CNN interview that estimates of 10,000 or more dead may turn out to be high, international relief officials said they were still assuming the worst and expressed worry that bottlenecks and delays could prevent them from reaching millions of victims for days. 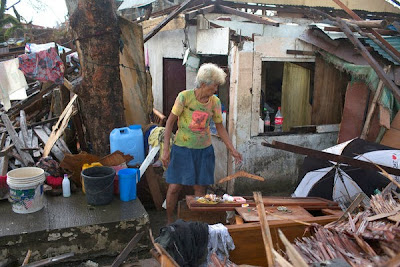 A woman tries to salvage items in the wreckage of her home in Tacloban in the aftermath of Super Typhoon Haiyan.
*******


Officials in Manila found themselves on the defensive, asserting that they were doing the best they could despite a storm that Valerie Amos, the top United Nations relief coordinator, who flew to the capital to help take charge of efforts, called the "most deadly and destructive" to hit the Philippines. She pleaded for more than $300 million in emergency aid. 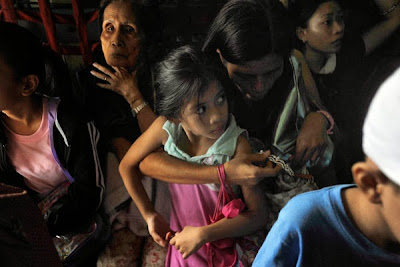 Frightened and gaunt-looking refugees, young and old, wait to flee the destroyed city of Tacloban in the Philippines in the wake of Typhoon Haiyan.
The suffering of humanity at times is unbounded.


"There has been a lot of commentary that relief is not moving as fast as it should be," said Praveen Agrawal, the World Food Program’s Philippines representative and country director. "The reality on the ground is there is such a level of devastation." 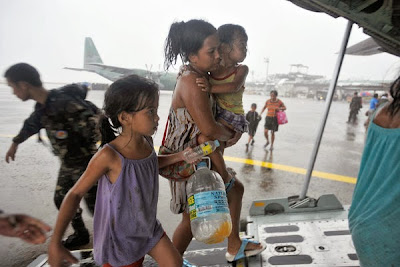 Refugees board a plane to depart devastated Tacloban, heading to other parts of the Philippines not damaged or destroyed by Typhoon Haiyan.
*******


The travails reached new heights on Tuesday in Tacloban, a formerly thriving city in the east-central Philippines that appeared to get the full force of the typhoon. Wearing face masks or pulling their shirts up over their noses to suppress the smell of bodies rotting on the streets, a procession of survivors three miles long walked toward the airport, where relief supplies had begun to arrive. 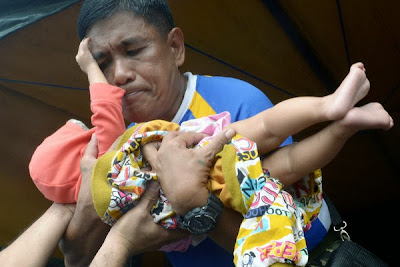 A baby is evacuated aboard a plane in the aftermath of Typhoon Haiyan for other places in the Philippines.
*******


Here is a link to a summary of ways to help the Philippine typhoon victims. 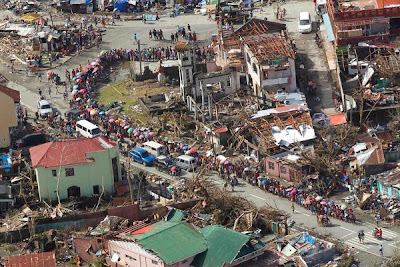 Residents wait in a long line for supplies amid the devastation of Tanawan in the Philippines in the wake of Typhoon Haiyan.
*******


As an add on to my point above about the initial reports downplaying the scope of the disaster, we in the United States immediately after Hurricane Katrina struck and the levees in New Orleans broke, turning a disaster into a catastrophe with society breaking down for a time inside the city and creating the biggest internal American diaspora since the Civil War.

A comparison of Hurricane Katrina and Typhoon Haiyan at their peak intensities as seen in color-composite satellite images. Based on this set of images, I tend to agree with the Joint Typhoon Warning Center's assessment of the phenomenal ("off the charts") strength of Haiyan.
*******


But not to worry because Fred Hiatt and his WaHoPo Editorial Board -- those Mouthpieces of the American corporate-oligarchical overclass and "Washington Consensus" Central -- were blathering about all of Iraq's WMDs how the Bush administration's response to the situation was "commensurate with the scope."
There are few human beings more personally offensive to me than Fred Hiatt. The Eschaton blog summed it up best here in April 2012 -- and I particularly like the line about his epiphany in realizing that WaHoPo editorials aren't actually meant to be read by ordinary people but rather the means by which the "Gang of 500" communicate their "interests and priorities" among each other in a quasi-public forum. But let's leave that aside for now. 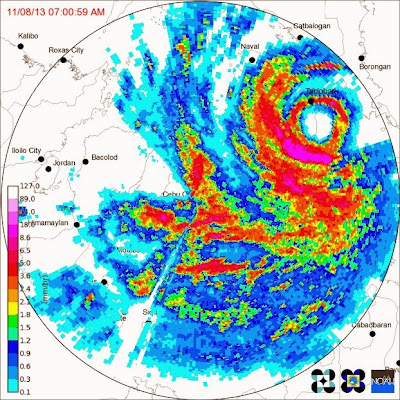 
Returning to Haiyan, just for record keeping, at this point the highest estimated 1-minute wind speed at landfall is preliminarily put at 195MPH, although the Philippine weather agency PAGOSA apparently disputes that, and the central pressure was 26.43mb (895mb), making it the strongest land-falling tropical cyclone in modern world records. At some point, there is going to have to be WMO concurrence on a "final" set of numbers. 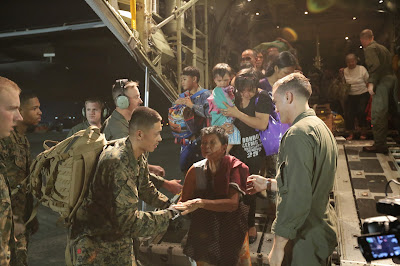 U.S. Marines assisting Philippine refugees fleeing the devastation of Typhoon Haiyan as they arrive on a KC-130J Super Hercules turboprop military transport plane at Villamore Air Base in Manila, Nov. 11th or 12th, 2013. (This is from the Typhoon Haiyan Wikipedia page.)
*******


OK, that's all for now. I may try to post a really quick update after this. Actually, on second thought, it's too late to do that tonight. I'm home after a regular work day followed by a relatively short after-work happy hour at Elephant & Castle on Pennsylvania Ave with some co-workers, and then a stop by the YMCA (National Capital). Of note, the YMCA Anthony Bowen is going to become my main gym now except for the pool. I'm just watching TV at this late hour -- I Dream of Jeannie and Bewitched reruns.
--Regulus
Posted by Regulus at 1:50 AM