On the Coming and Going of a Late November Nor'easter and 44th Birthday; Daisy Bell and a Bicycle Built for Two (or Just a Penny-Farthing) 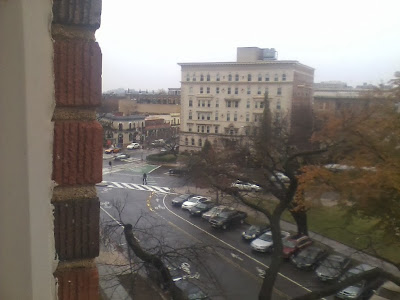 My familiar 5th floor Hampton Courts apartment view looking down New Hampshire Avenue and past the intersection of 16th and U Streets NW, Washington, D.C., 11:40AM Nov. 27, 2013. It was cold and sleeting out when I took this picture.
*******


I started a version of this entry last night but just never completed it.
It is sleeting this late morning / early afternoon here in D.C. and likely the precipitation moving back in will outright will turn to snow for a period of time. There even might be some minor accumulations, although more to the west and north to the extent the precipitation shield from what looks to be the secondary coastal low and possibly an upper level one behind it. Here in D.C., it will just be conversational snow. 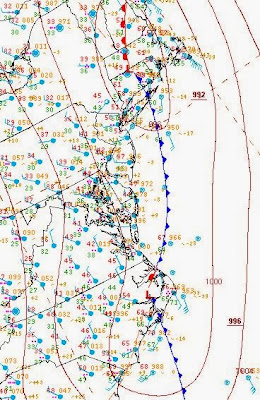 Here is the 15Z 11/27/2013 (10AM EST 11/27/2013) NWS high resolution surface weather map from centered on the East Coast and portions of the Appalachians. It shows the first low from last night now centered just north of Hartford, Conn., and a secondary coastal low near the NC Outer Banks.

It also does not show any upper level features such as 500mb voriticity maxima since it is strictly a surface map.
The northern and southern jet branches are becoming fully phased, so the surface lows should, I think, do the same thing by the time they have pulled away from the mid-Atlantic region and reach New England / the Canadian Maritime provinces. 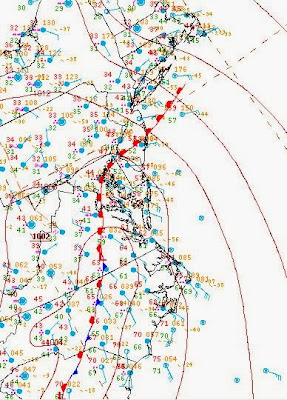 Here was the same high-res surface map 12 hours earlier (10PM EST 11/26/2013) for the same area. It shows the coastal front set up right over the Metro D.C. / Baltimore areas.The warm front was indicative of the "thermal ribbon" across the immediate Metro D.C. and Baltimore regions.


I also captured the 11PM 11/26/2013 and Midnight 11/27/2013 regional observations table from the Sterling LWX page to show this temperature contrast across the region during the height of the storm. 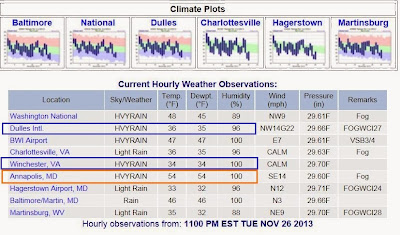 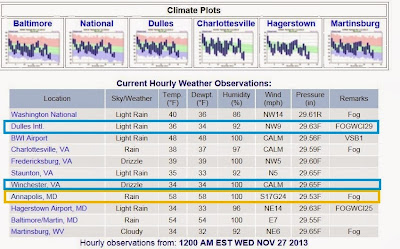 The midnight 11/27/2013 observations now had a 24F difference between Annapolis, Md., and Winchester, Va., (58F and 34F, respectively) while Reagan Washington National Airport (KDCA) had dropped 8F in the intervening hour to 40F. However, KDCA remained around 40F for the next 12 hours.
******* 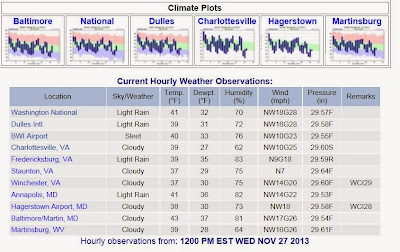 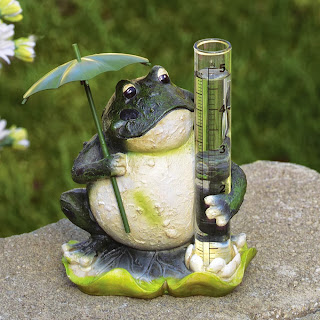 Finally, below are a series of Sterling (LWX) radar images ... 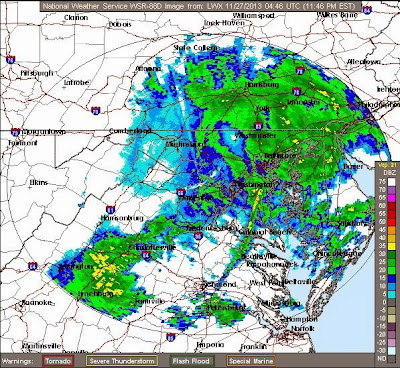 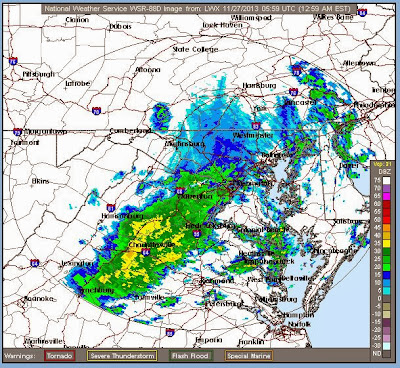 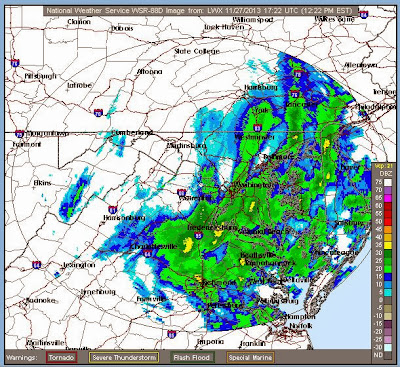 
Last night was a good night. I left work early and went home, and then quickly went back out to D-I-K bar where Chris H. was bartending. Gary showed up not quite an hour later around 640PM. Then LP drove up by 715PM and the three of us went back to Sur La Place in Palisades -- where I got gone in September with LP and Kristof. We had a really nice dinner with wine.
We rode back in a deluge between about 10 and 1030PM. 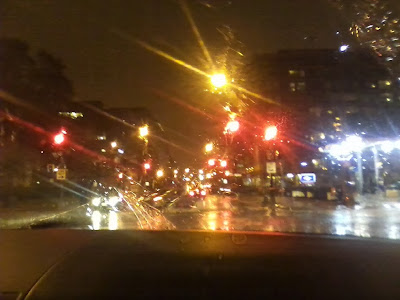 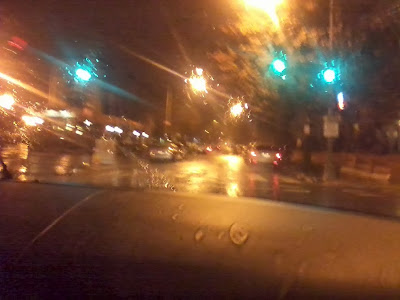 
I'm home right now -- I'm working from home for part of today -- before heading to my mom and Ray's place in Millersville, Md., later today.

I'm planning to take the MARC Camden Line from Union Station to Baltimore / Camden Yards and then the MTA Light Rail to Cromwell Plaza, and then I think we are going to the Honey Bee restaurant as part of our real Anny Runnell Kenny, Merlin-style Thanksgiving that includes going to an American Legion Hall (possibly on Kent Island on the other side of the bay) for Thanksgiving dinner and Medieval Times at Arundel Mills Mall on Friday.


By the way, I've never been to Arundel Mills Mall, a fact upon which (to paraphrase the TV sitcom character Murphy Brown and the State of Florida) I've always prided myself.
I should return on Saturday afternoon (and will go straight to the gym).
However, it also turns out that I have two major work editing assignments to do -- one due Monday COB on Smart Grid stuff and another on permitting and regulatory issues for a mammoth Hawaii clean energy undertaking. This means that upcoming weekend, in particular Sunday, is going to feature a lot of hours working from home.
I really should go to the gym today even if briefly, though I am quickly running out of time to do so. This is especially true since I won't be going until Saturday. (As it is, my weight has been holding steady at about 142.5 pounds -- or a net of 42 pounds of weight loss since June 2012 and more like 46 pounds of fat.) However, at this point, I'm not going to obsess on additional weight loss anymore. I'm sorta where I should be.
*******


Entry from last night ...
At this point in the original entry, I had a discussion last night of how I was watching I Dream of Jeannie and what a riot was the late Paul Lynde, who showed up a few times on that show. 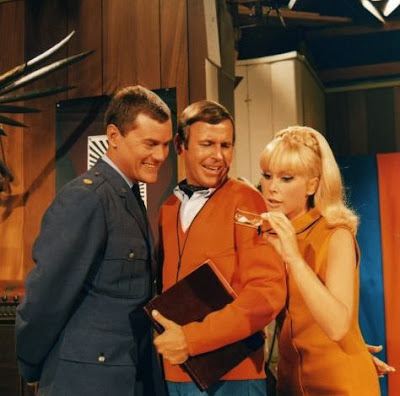 
My entry from last night also featured this stuff, although it's not particularly relevant to anything right now. Indeed, I'm not even quite sure why I had it. Oh, yes, now I know why ... 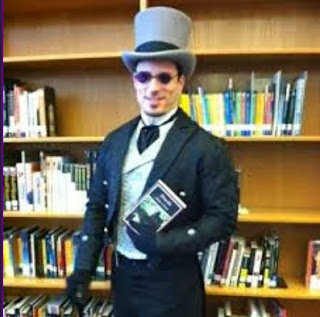 I had posted this picture. I did so not for any particular reason except I just like it.
*******

"Daisy, Daisy, give me your answer do, / I'm half crazy all for the love of you. / It won't be a stylish marriage. / I can't afford a carriage, / But you'll sweet upon the seat of a bicycle built for two!"
Apparently, the song is called "Daisy Bell" and was written by Harry Dacre back in 1892, although Nat King Cole's "On a Bicycle Built For Two" was another version of it, and there may be others.
This is the Nat King Cole version with kinda wonderful illustrations.
******* 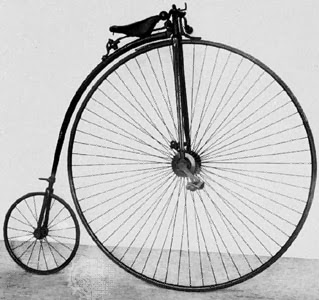 Shouldn't there be mention of a penny-farthing? No, that's a weird bicycle for one.
*******


Clearly related to this, the song Daisy Bell appears in "2001: A Space Odyssey" during which Dave shuts off the psychotic HAL-9000 computer. Note that HAL was supposed to have sung the song when it was activated in 1992 --exactly 100 years after Dacre wrote the song. (Yes, and we know that each letter in "HAL" is one letter off from "IBM".)
YouTube clip of that scene even as HAL sings this song, which starts around 3:30. Of note, Keir Dullea is still alive.
*******

Oh, and the scene from 2010: Odyssey Two where Jupiter collapses on itself and then "ignites" in thermonuclear fashion to make a new sun kinda awesome, too.
Ah, the late, great Sir Arthur C. Clarke. As an aside, his book Imperial Earth really affected me with its late 23rd Century quasi-utopian socialist future.
*******

This image from the very end of 2010: Odyssey Two (after Jupiter had become a new sun) looking down the Reflecting Pool (at the site of the old Rainbow Pool that is now the World War II Memorial) toward the Lincoln Memorial would have to be right at the Summer Solstice to have the Sun setting so far to the northwest. Also, I'm not sure Jupiter would ever be in that position vis-à-vis the Sun. Of course, if it had ignited into an actual star, then who knows.
*******


OK, that really is all for now. I may update this blog tonight or tomorrow.
--Regulus
Posted by Regulus at 1:41 PM