**This entry was originally posted at 1:50AM EST 11/8/2013 and has been updated twice, as indicated **
2nd UPDATED 2:51PM EST 11/9/2013: Contrary to what was suggested in my first update, it now looks like there was indeed widespread destruction and major loss of life across the impacted areas (SEE BOTTOM OF ENTRY after first update). 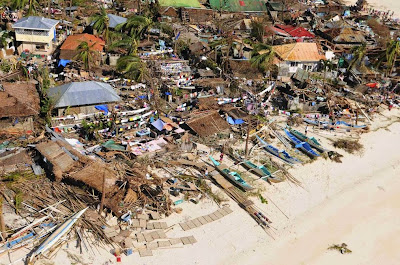 Coastal destruction in Iloilo province of the Philippines in the aftermath of Typhoon Haiyan, Nov. 9, 2013.
*******


UPDATED 8:08PM EST 11/8/2013: Thankfully, the impacted area appears to have been spared the feared effects both because of the forward speed of the storm, and it may not have been as strong as estimated (SEE BOTTOM OF ENTRY). 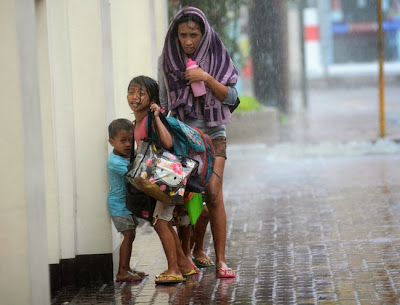 A woman and two children huddle in the wind-driven rain in Cebu City, Philippines as Typhoon Haiyan impacts the region, Nov. 8, 2013.
******* 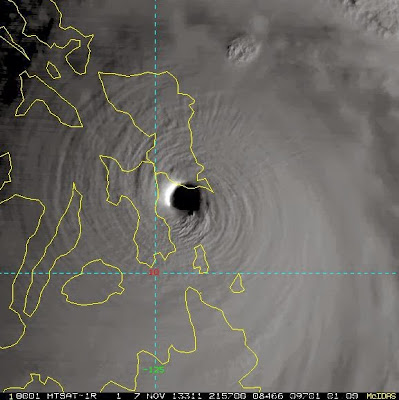 
Super Typhoon Haiyan made landfall about four hours ago -- early Friday morning local time -- on Samar and Leyte Islands in the central Philippines -- with estimated 1-minute maximum sustained winds of 195MPH and gusts to EF-5 tornadic speeds of 230MPH, making it quite possibly the strongest tropical cyclone ever to make landfall in modern world records.

The typhoon's central winds were estimated by the U.S. Navy's Joint Typhoon Warning Center in Honolulu. 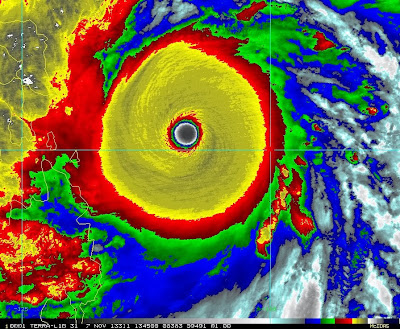 Enhanced satellite image of Super Typhoon Haiyan on Thursday, Nov. 7, 2013, its eye basically as perfect as a tropical cyclone's eye can ever be. Haiyan did not undergo the usual eye-wall replacement cycles with intensity waxing and waning. It just stayed a monster continuously for the past two days.
******* 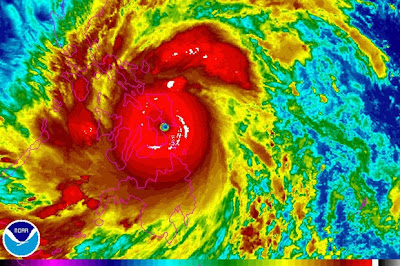 
"If it maintains its strength, there has never been a storm this strong making landfall anywhere in the world,” said Jeff Masters, founder of Weather Underground in Ann Arbor, Michigan said in an interview with Bloomberg News. "This is off the charts."
Called Typhoon Yolanda by the Philippines government (not sure why there is a different naming convention), Haiyan earlier today reached an 8 on the Dvorak Current Intensity Chart -- the TOP of that index. 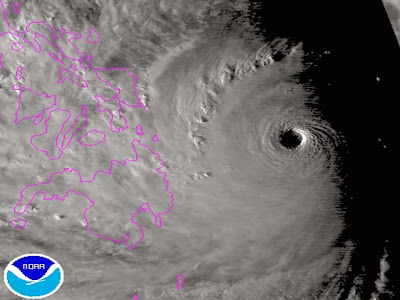 Another visible satellite picture of Typhoon Haiyan taken at sunset local time on Nov. 7, 2013 as it was nearing the Philippines.
Note how neatly the terminator line was bisecting the storm. Also note that the cyclone's inner eye wall clouds are perfectly symmetric with no overshooting cumulonimbus tops or other "hot towers" -- and probably not much lightning in the inner eye-wall.
It's just a blender of winds and rain. 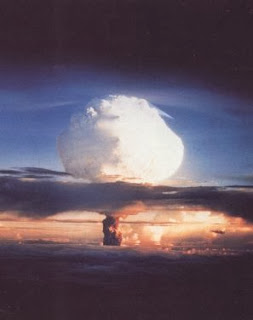 The continuous latent heat release in tropical cyclones of this strength is basically equal to a hydrogen bomb detonating every few minutes.

(Note: One cannot back click from this link, so I made the link to open in a new window -- at least I think so.)


And THAT, dear children, is precisely how Planet Earth transports the awesome heat of its tropical oceans out of the source regions and distributes that heat elsewhere. This is ESPECIALLY true in the sprawling central and western tropical Pacific, which is second only to changes in the solar insolation / change of the seasons in driving the global climate system. It also explains the year-round typhoon season.
******* 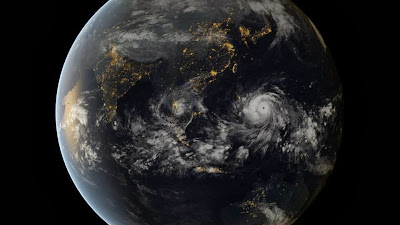 A hybrid satellite image from the Japan Meteorological Agency and EUMETSAT showing Typhoon Haiyan on its way to the Philippines, 1300UTC Nov. 7,2013.
*******


As stated in this NPR blog entry, "Those winds speeds would be 5 mph higher than the recorded maximum sustained winds of Hurricane Camille in 1969, Super Typhoon Tip in 1979 and Hurricane Allen in 1980." (See this same article contains an updated animated gif of the typhoon, presently as it is crossing the archipelago of the central Philippines.) 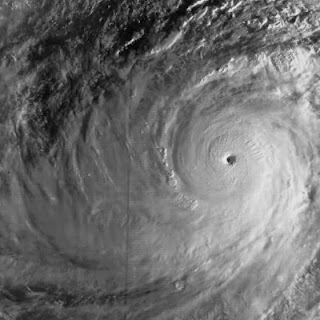 Typhoon Tip, another Pacific monster, holds the record for the all-time lowest surface air pressure in a tropical cyclone at 870mb.


I'm not sure what is Haiyan's peak intensity central pressure will be. For one thing, there aren't hourly flight reconnaissance measurements in that part of the world as there would be for a hurricane threatening North America. It may have to be estimated given its location.

Projected path of Super Typhoon Haiyan as issued by the Joint Typhoon Warning Center, warning no. 20.
*******


The typhoon's unbelievably perfect buzz saw eye wall crossed the southern edge of Samar Island near Guiuan and then crossed the Leyte Gulf before landfall somewhere near Tanauan (not to be confused with Tanauan City) and Palo on Leyte Island. But pretty much any place and anyone on central Leyte Island is in an immediate life-threatening situation. 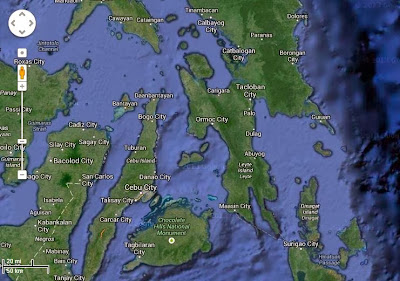 Google aerial map of the islands of the central Philippines.
*******


I hoped folks prepared in a big way -- mostly by evacuating as far as possible from the landfall strike zone. And if they didn't, then to borrow an overly dramatic phrase that is actually very appropriate in this case, May God have mercy on them (because nature sure won't).
I know the Philippines is "used" to having lots of destructive typhoons, but this is qualitatively and quantitatively different.
The Bloomberg article states that 126,000 people in 22 provinces have been evacuated -- though that number seems low given the magnitude of this monster. 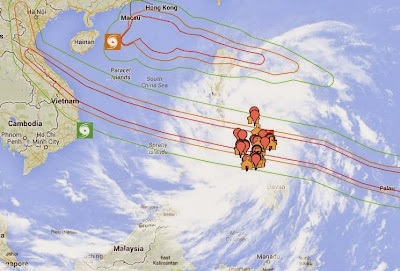 Google published this zoomable crisis and relief map (see above for screen capture of it) for the typhoon based on information from the Global Disaster Alert and Coordination System (GDACS).
Winds to these phenomenal strengths over such a widespread area of ocean are sure to raise a storm surge in excess of 20 feet (I think the CWG entry number of 10 feet is much too low -- probably a confusion of meters and feet). So in addition to 1-minute maximum sustained winds equivalent to an EF-5 tornado -- except over hundreds of square miles for several hours on end -- the storm surge is likely to be traveling many miles inland. 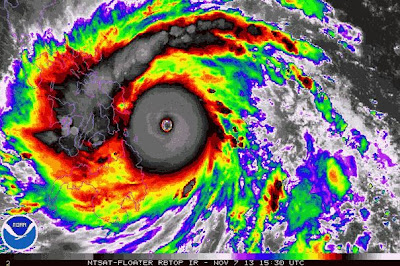 
In short, the situation in central Samar Island is a veritable blender of debris-filled destruction. No human or animal could survive outside in those conditions.
There will be pictures coming out later today of the destruction. 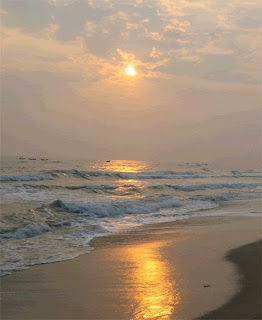 The storm should weaken as it crosses the Philippines -- it already appears to be -- and emerges into the South China Sea, although it could re-intensify, or at least maintain a category 4 strength -- as it approaches the coastline line of Vietnam -- possibly with a direct strike on Da Nang.


I would like to credit the following Capital Weather Gang entries with information for this entry (with embedded links):
Super typhoon Haiyan strikes Philippines, among strongest storms ever - 945PM EST 11/7/2013

PM Update: Windy and cool to close the work week; frightening Haiyan images - 458PM EST 11/7/2013
OK, that's all for now. I had intended a different entry tonight but this topic took precedence.
*******


Super Typhoon Haiyan ("Yolanda") trekked across the central Philippines but the feared catastrophic destruction and major loss of life did not occur. 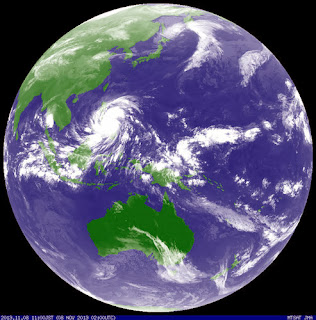 This is partly because of the speed at which the typhoon was chugging along -- approx. 25 miles per hour -- but also because the tropical cyclone may have been markedly less strong than the satellite-based estimates of the Joint Typhoon Warning Center. 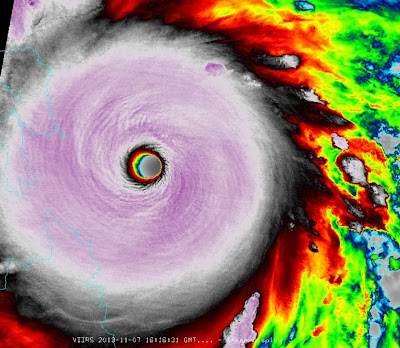 This New York Times article quotes Rene Paciente, a forecaster with PAGASA, the Philippine government's national weather agency, said that the 195MPH winds were "exaggerated" and that actual measured winds were no higher than 150MPH (still though a category 4 / borderline category 5). 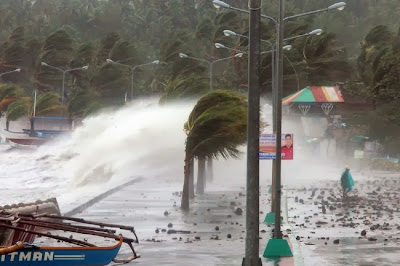 
Keep in mind the strongest winds are in a fairly small area -- certainly within 50 miles of the eye -- and the storm was moving quite quickly. Also, it appears that approx. 700,000 people evacuated the danger zone, so that helped as well. 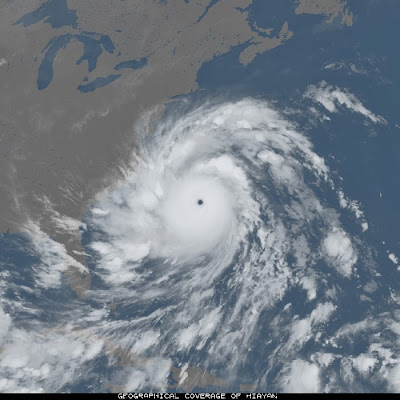 NOT A REAL IMAGE!!
Just for "fun," a meteorologist at the Univ. of Wisconsin created an image of Super Typhoon Haiyan superimposed along the U.S. East Coast.
End of update and entry.


It now looks as though the destruction and major loss of life were much worse than initially reported with the Red Cross reporting at least 1,200 fatalities and the figure likely to climb much higher. There is also widespread destruction across the affected archipelago of islands. 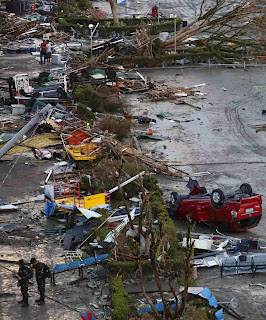 Left: Debris litters the streets of Tacloban, Philippines in the aftermath of Typhoon Haiyan, Nov. 9, 2013. At least 1,000 people were killed here -- and the number is surely much higher. The city of 218,000 has many fatalities and widespread destruction.


Unfortunately, this kind of outcome is much more in line with what was to be expected with such a massive typhoon hitting what is still a relatively poor country (and as for that, look what Hurricane Katrina did to allegedly "the greatest nation on Earth"). 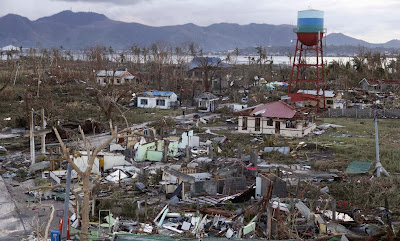 Another image of Tacloban in the aftermath of Super Typhoon Haiyan, Nov. 9, 2013.  The American Red Cross and UNICEF are attempting to assist.
End of 2nd update.