My 44th Birthday -OR- Flip Turning for Turning Forty-Flippin-Four 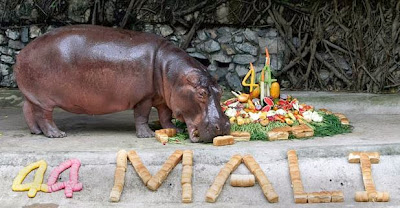 "Mali" the Hippo at the Dusit Zoo in Bangkok, Thailand celebrates her 44th birthday with a healthy hippo snack as seen in this photo from September 2010 that appeared in the British Telegraph newspaper on 9/23/2010.
*******


It is now after midnight on November 26th -- my 44th birthday. (I just updated my Blogger profile to reflect this age.)
So I got home tonight after work but before going to the gym. I had just gone grocery shopping and was toting three plastic bags of groceries 'n' stuff with me. When I opened my apt. door, there was a Priority mail package from the United States Postal Service on my floor.
On the label, I saw my dad's scrawled handwriting. 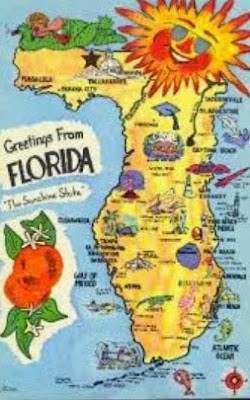 It was a special delivery from Flagler Beach -- the Jewel of the Florida Atlantic Seashore and its legendary "Space Coast" (well, actually, the Space Coast is really just the area around Cape Canaveral). Flagler Beach has nothing on other Florida places ... South Beach, Fort Lauderdale, Bo-CAAH, Palm Beach, and Jupiter (especially Jupiter).


Anyway, I opened the package ... And inside were the following items ... 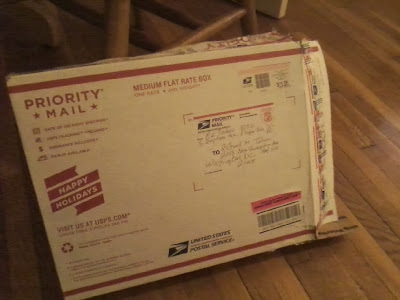 Some incredibly old photo magazine about the Apollo 11 moonwalk featuring articles that apparently appeared in The New York Times, as well as two pictures I drew years ago, one from 1980 in 4th grade at the old Elberon Public School in Long Branch, New Jersey that was a 4th grader's poem about snow (see picture below -- I'll try to scan the thing at some point). 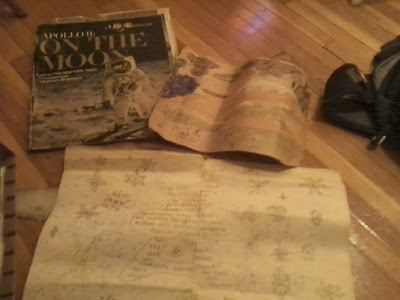 Also included were loads of these tiny little booklets with really poor quality pictures of my dad and namesake late Uncle Richard as children and my grandparents, not to mention stuff involving me. The latter included some ridiculous Glen Burnie High School honor role listing when I was in the 11th grade and made the "A" Honor role. (Hell, as a 12th grader, I even made the Anne Arundel County Superintendent's Honor Role one semester -- Big Frickin' Whoop. It was all for naught.) 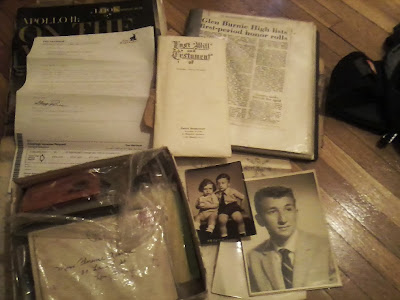 It appeared in The (Maryland) Gazette dated Jan. 7, 1987. Ah, The (Maryland) Gazette ... one of America's oldest newspapers and (at least back in the 1980s, before it became part of a chain) the most likely to have a misspelled headline ("Glosnost" anyone??). The article joined another dated May 16, 1987 about some dumb play some of the Glen Burnie High School audio-visual production group (rather than the drama group) people were in (and that was inexplicably featured as a front page picture with me dressed as a wild-looking doctor). 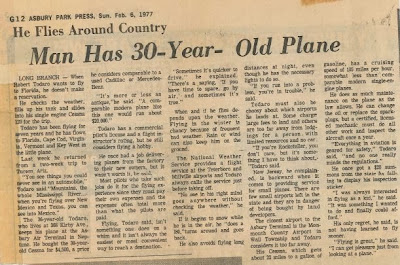 There were also a bunch of other drawings from the 1970s and even older articles (including a copy of that Feb. 6, 1977 Asbury Park Press article about my dad and his then-30 year old Cessna). My scanned images of these are above and below -- I had another copy from which I made this copy. 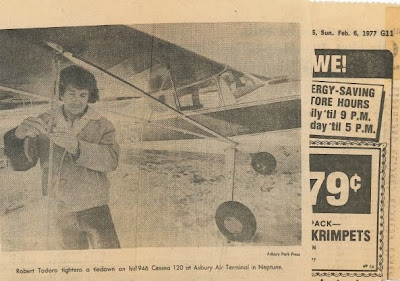 Oh, and these New Jersey Department of Transportation memo forms when my dad was in trouble in the mid-1980s -- when his top supervisor at the Freehold office was trying to get him fired and using stupid various pretexts. (I've never been sure what was the larger issue.) All of these are in some poorly laminated notebook with duct tape bounding that is quintessentially one of my dad's jury-rigged creations. 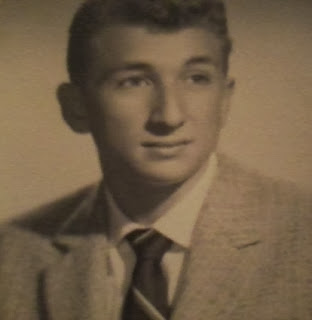 There was also an old photo of my dad in his high school picture, namely, Long Branch High School Class of 1958 -- a blurry picture of that picture is at left -- and a second one from at least a 12 years earlier of him and his younger brother ages 3 and 5 (circa 1946).


Oh, and yes, to cap it off, there was a copy of his Last Will & Testament drawn up in the mid-1980s and a copy of an insurance policy that seems to have been worth about $1,000.
So there you have it, Dear Reader. My dad sends me for my 44th birthday a copy of his 30-year old, laughably out-of-date will, and random and disparate photos, cards, and newspaper clips. These are the surviving detritus of what were once family records lovingly maintained by my late grandmother, but that now are just fading and out-of-context mini-time capsules of a lost mid-to-late 20th Century world. Oh, yes, not included in the package was any birthday card -- much less an actual present. Heck, there wasn't even an explanatory note.
By the way, both my parents have a habit of sending me pictures and other stuff that they no longer want.
Having said all that, I did get a nice card from my friend Quill. Thank you, Quill. 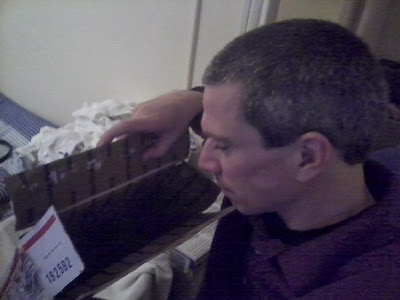 
I made it to the gym tonight although I didn't go into the pool after the jog or weight-lifting. I just didn't feel like swimming.
As for later this Tuesday, I'm supposed to go with LP to Sur La Place in the Palisades neighborhood. I went there in September with LP and Kristof, and I asked LP if we could return there for my birthday. As for Kristof, he is presently in his native Poland (Gdansk) visiting his mom.
On Wednesday, I'm going to my mom for the Thanksgiving holiday on Thursday. My plan is to return on Saturday afternoon. All in all, it will be a very shortened workweek. (I intend to work from home for part of the day Wednesday.)
Turning to the weather ...


I don't really want to write a big, long discussion, so I'll be brief ... 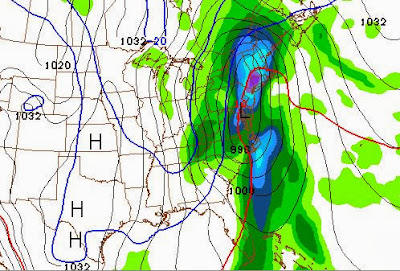 We're still on track for heavy rain event in the D.C. area that should start out as some wintry / frozen precipitation, especially in the far northern and western suburbs before transiting to all-rain, although in the Blue Ridge and Potomac Highlands, a prolonged icing event is possible. 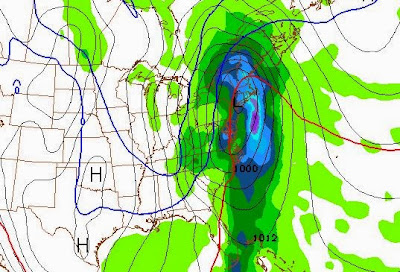 
As the northern and southern branches phase, a single low pressure will form along the mid-Atlantic coast, although it appears that there will be energy hanging back and will bring additional precipitation to the region even as colder air dives in -- resulting in a possible transition back to snow even along the I-95 corridor. 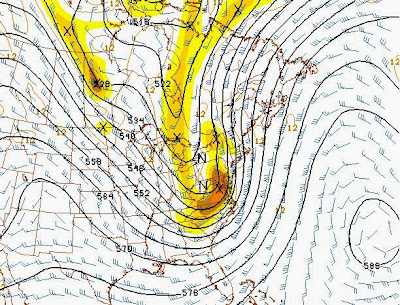 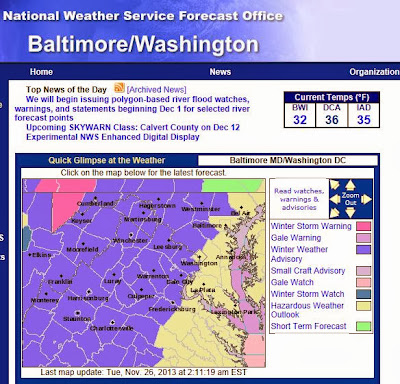 The Sterling (LWX) county warning area (CWA) weather advisories as seen on the LWX homepage, updated 2:11AM Nov. 26, 2013.
As the map shows, there are extensive winter weather advisories in effect though not for D.C. or Baltimore proper and points east and southeast (south and southwest of D.C., Fairfax and Prince William Counties are in the advisories). Winter storm warnings are in effect in Garrett County and along the Allegheny Front.
*******


Total QPF amounts for the event are forecasted to be in the 1.5 to 3 inch range in the immediate Metro D.C. and Baltimore areas. 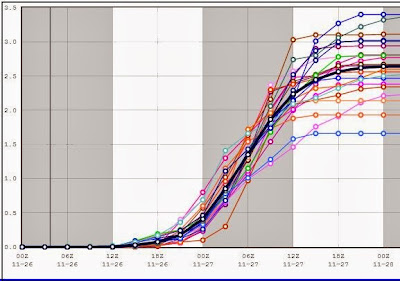 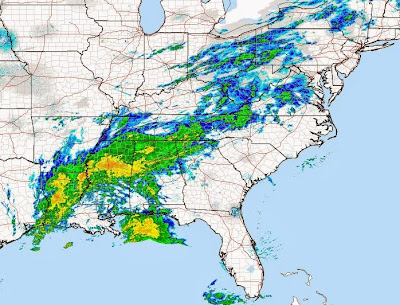 
Of note, this has been the coldest November in the D.C. area since 1987. This has brought out all the Teabaggers and comment trolls in any article to go on and on about "global cooling" and "the hoax of global warming" that they heard on Fox & Friends and/or rightwing talk radio. These people live to post internet comments following any sort of online news article.
OK, that's all for now.