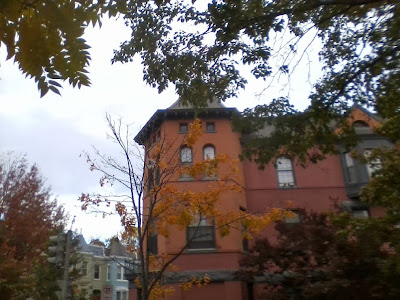 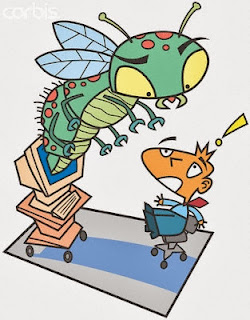 As a brief update, my anti-viral software detected some threat -- actually, four of the same "PUA"  (that is, potentially unwanted applications) and removed them. I already told the IT people. I also have temporarily removed the StatCounter feature from this blog. I will run scans a few more times before I take the computer to work on Monday.


About that, I think it's time for me to get my own computer rather than using my work one at home, ferrying it back and forth all the time in my backpack. I can't keep having these kinds of issues. I can't jeopardize my job because of it.
Of course, this $500 purchase is yet another reason why I will likely have to keep the 401k loan I took out rather than return it. 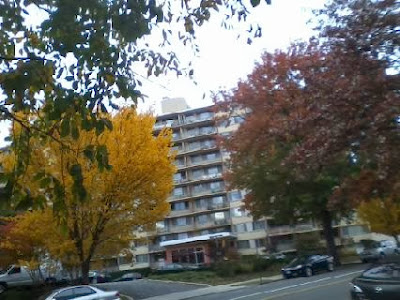 
As it is, I always seem to be having these kinds of computer issues unlike other people at work. I think at least one of the reasons for this recurring problem may be that for my BA compliance work, I frequently visit the webpages of engineering and HVAC installation firms, and some of these are really small and hosted by other entities and are seldom updated (and end up as carriers of all kinds of internet garbage).
Oddly enough, I was able to check my StatCounter stats through the point at which I removed it -- and I did so from the treadmill at the Anthony Bowen YMCA.
For real. And, no, it wasn't easy to type in a URL and passcode, not to mention scroll, while jogging. 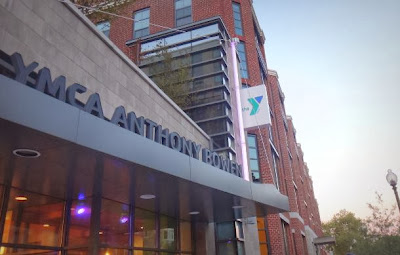 Exterior of the Anthony Bowen YMCA in a picture I found online.
*******


About that, I went to the Anthony Bowen YMCA located on W Street just off 14th Street because my gym (the National Capital YMCA) is closed until Monday (and the pool next Saturday). (I went there instead of the JCC where Gary had invited me as I just wanted / needed a regular gym workout.)
It is a very nice gym -- completely renovated and everything brand new, lots of equipment, and subdued lighting, and a pool that although only about half the size of the YMCA National Capital pool (or maybe a tad less) and no deep end (3'6" on one side sloping imperceptibly down to 5' on the other side) is still clean and very pleasant. 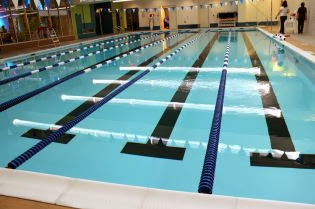 A picture of the swimming pool at the Anthony Bowen YMCA that I found online.
*******


It is also a lot closer to me than the YMCA National Capital -- probably just half the distance.
The only issue is that it is so much smaller than the National Capital YMCA and the locker rooms are too small. There isn't enough room for basket rentals so you pretty much have to take everything you need and leave with it. There are rows of towels and an ingenious locker combination system, both of which negate the need for a towel attendant (although I like the towel attendant K. at the National Capital YMCA -- she does it as a very part time job from her main Brookings job and she is quite the New England Brahmin blue blood with a home in Maine). 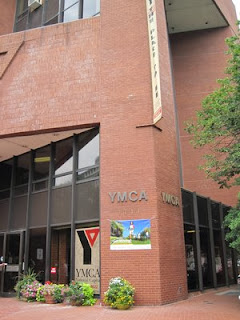 Also, the pool closes a half hour before the gym, which kinda sucks. I just don't understand the justification for that. I actually raised a bit of an email fuss with the head of the National Capital YMCA when a misunderstanding led staff to close the pool a half hour there -- but it turns out that wasn't this facility's policy, and the pool closes same time as gym.


All that aside, I could and will definitely go there again, although the YMCA National Capital will remain my main gym.
I had a 5.49 mile almost 1 hour jog (including cool down), did some weight-lifting, and swam for about 20 minutes. So all in all, it was a good workout. And my weight was at 142.5 pounds, so I'm maintaining near my 40-pound loss low (and more like 44 pounds of fat). 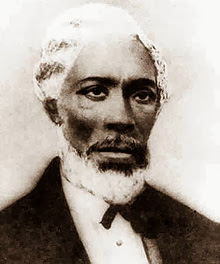 One other matter related to the Anthony Bowen YMCA ...

As I left and a Saturday night was already underway, I once again realized that I always fail to appreciate just how radically changed is that whole neighborhood (it's the upper edge of the Shaw neighborhood just south of Columbia Heights).


It's a young person's D.C. fantasy land, of a sort, with restaurants, bars, book stores with internet cafes, condos, and gyms.
*******


The rest of the pictures in this entry were ones I took last night (as discussed below in the text). 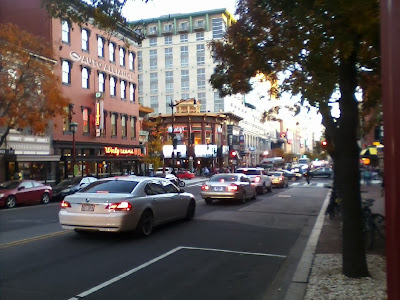 The 800 block of 7th Street NW in the (heart) of the Chinatown section of downtown Washington, D.C., 5:49PM Nov. 1, 2013.
(As Andrea and I got off the Metro on the G and 7th Street side of the Gallery Place - Chinatown Metro, there was some wild-looking black "minister" haranguing loudly through loudspeakers from the back of his beat-up old white van, screaming that weird and basically racialist hate-speech gibberish that you basically get sometimes from these street-side crazy religious sorts. He and his cohort sometimes set up their roadshow at that entrance. I don't understand why that kind of stuff isn't considered a public nuisance. That aside, Chinatown is an amazingly vibrant place these days.)
******* 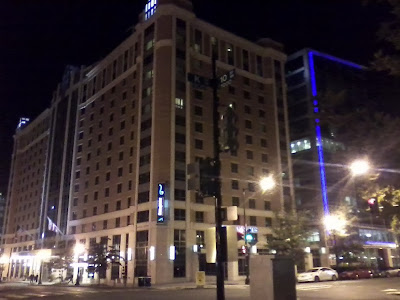 
As for tonight, I intend to post a jukebox Saturday entry and then go out later. As for tomorrow, I think I'll try to take that delayed bike ride from Shady Grove back into D.C.. It will be the last weekend this fall that the trees will be at colorful leafy peak. The weather today was mostly cloudy and on the mild side with a few instability showers. Highs were around 72F at KDCA, 69F at KIAD, and 68F at KBWI. I think a front passed through and tonight is mostly cloudy, breezy, and noticeably cooler with lows forecasted to be in the 42F to 45F range. 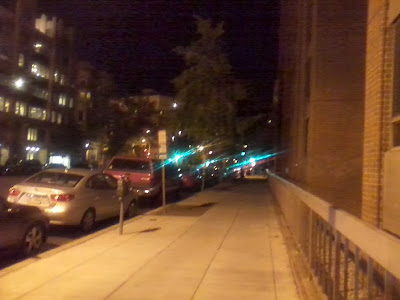 Downtown Washington (uncertain which street but I was en route toward Logan Circle / Dupont Circle) with green traffic signals in the distance, 10:18PM Nov. 1, 2013.
*******


Last night, I went with Andrea and Imara after work to Asian Spice at H and 8th Streets in Chinatown, where we had a really nice time. I then walked back to the Dupont area, stopping for a glass of wine and a really good spinach salad and bread and more wine at Brasserie Beck (not Brassiere Beck). 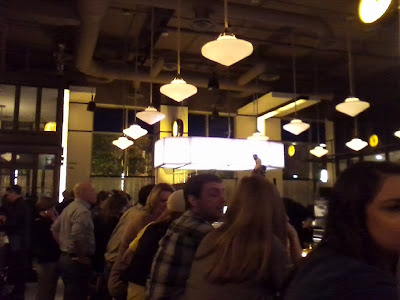 
The place is located at the corner of 11th and K Streets. The seafood-dominated food looks like it is quite good (I didn't have any main meal) but the place (at least its dinner menu) is rather expensive. It was also Friday night crowded, but I managed to piece together a reasonably priced light meal. 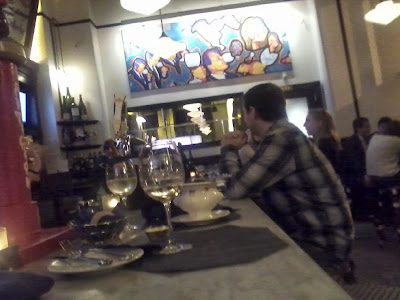 Another view of the bar at Brasserie Beck, Washington, D.C., 9:42PM Nov. 1, 2013. That back wall mural was kind of weird -- showing a man downing a glass of wine and appearing to get drunk while this bemused woman looks askance (in multiple images of varying size).
*******


I then went to D-I-K where Chris H. was working and was at the downstairs bar for a while before finally walking home around midnight, kinda drunk.
I'm home right now watching the Sci Fi Saturday Night lineup on Me TV including Lost in Space, the original Star Trek series (with some updated special effects that I mentioned last week), and the Svengoolie-hosted monster movie (tonight it is the original Boris Karloff movie version of Frankenstein).
Speaking of Lost in Space ...


Kelly Bundy: "As the Chinese philosopher Unconscious said, 'It's better to have loved and lost than to have never watched Lost in Space." 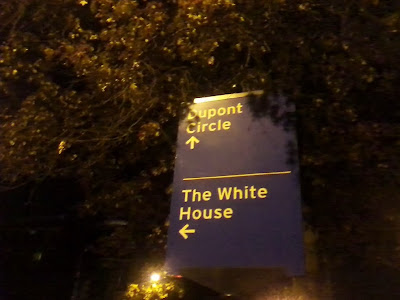 This is one of those bright blue signs (looking navy blue at night) that were put up back in the late 1980s (before I came to D.C.) geared toward visitors / tourists pointing them in the direction of certain sites. This is the one on P Street near 16th Street NW and directs people toward Dupont Circle and the White House. I took this last night at 10:41PM Nov. 1, 2013.
Oh, yes, the "P" in Dupont is NOT capitalized when referencing Dupont Circle. Yes, the circle is named for Rear Admiral Samuel Francis Du Pont, a member of the Du Pont family, but as spelled by the city, the "P" is not capitalized.
*******

OK, that's all for this update. "Jukebox Saturday Night" musical entry to follow.