Lady My Liberty and Reagan's "Morning In America" Way Back When -OR- GAL IS IT!! 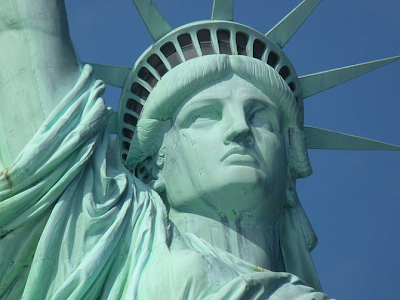 
I'm not even worried about who you were based on as a model or whatever about the American Civil War. As the British would say, that's immaterial.
But I would love to know what you looked like in those first few years. I just would have loved to have seen you in your coppery / bronzy early years (or like it appears in that weird show Fringe). 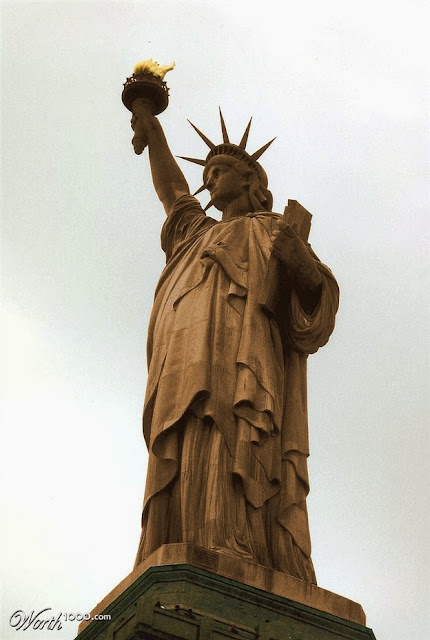 Like this.
(Though it may not have even looked like this at the 1886 unveiling -- it had already been displayed in various places and ways for a number of years.)
******* 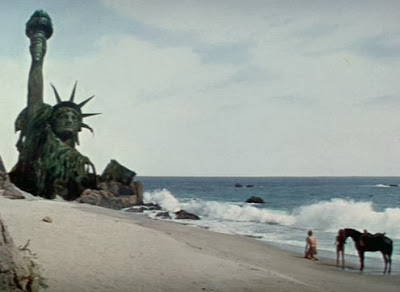 
This is EXACTLY why I (even though I'm a crazy social-democrat) love the Reagan era (again, just sayin' -- you had to be there ...) with its astonishing optimism that included buried inside this 1985 "Coke Is It" commercial images of a scaffolding-covered Statue of Liberty (and workers saluting it) that is TOTALLY a "response" to the movie from 18 years earlier.
Here is a YouTube version of it (the EXACT ad of which I was thinking -- and NOT likely to last long on the internets).
More to the point, and putting aside it is for a soda pop soft drink, this to me is one of THE MOST AWESOMEST commercials ever made on American television. 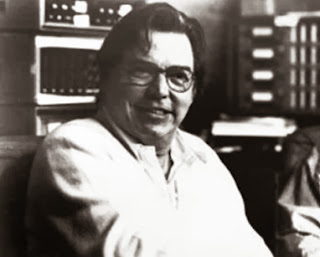 Now just for clarity, the last part of the clip is the Brazilian version of the ad -- and it features Antônio "Tom" Carlos Brasileiro de Almeida Jobim -- the Brazilian "Waters of March" singer whose song is that upon which the "Coke Is It" theme is based. Also, to be clear, I'm not exactly sure how long this commercial will actually last on YouTube -- it may disappear in a short period. 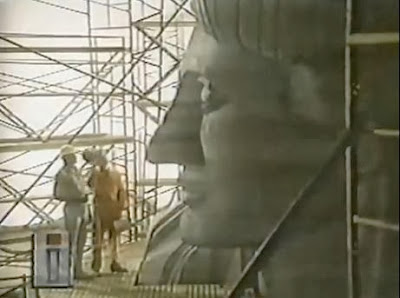 Lady Liberty shows up at 0:16 as show in this screen frame grab image.
The commercial also featured a little girl on the beach playing in the sand seconds before hand (from 0:13 - 0:15) that is also TOTALLY a "response" of the "Morning in America" optimistic world of 1985 to the dark "Planet of the Apes" world of 1968. 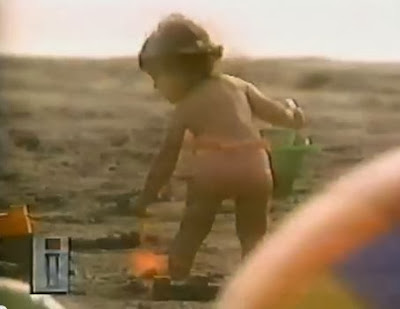 
Irrespective of that, there were literally a hundred or so commercials for the "Coke Is It" ad campaign between 1982 and 1987 that appeared on television back then -- and which I very well remember. The wisdom of drinking so much soda pop aside, this was a time of far fewer TV commercial networks. It's a period that can't be replicated -- or today even envisioned.
And if you're too young and dumb and clueless to remember that period, here is Ronald Reagan's 1984 "Morning in America" campaign reelection commercial, here you go ...
We just don't do commercials -- or politics -- or pretty much ANYTHING -- like this anymore.
As for Pres. Reagan, while he could be awful in some ways, and set the groundwork for our current dystopian era, nevertheless, he could be just avuncular wonderful. (Oh, and I wish I knew who did the voice for the commercial, though.)
******* 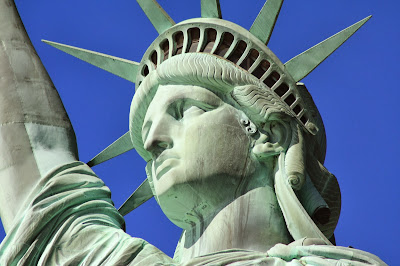 You're just kinda awesome in a colossal and wonderful yet human sort of way, and I love you.
OK, that's all for now. Yeah, yeah, yeah ... I was ever-so-slightly imbibed when I posted this. Sue me. As for my next entry, well, at this point, it is more likely to be on Monday rather than Sunday.
--Regulus.
Posted by Regulus at 6:01 AM