Time to post this one. It's Saturday night relevant and by the Bee Gees - and therefore one of the greatest 1970s song ...
"Night Fever"* by the Bee Gees from the group's incredibly popular album Saturday Night Fever: The Original Movie Sound Track (1977)
*I know it says "Saturday Night Fever" in the YouTube clip title but that was the name of the main album and the movie; the song itself was "Night Fever."
I'll spare everyone the actual Saturday Night Fever movie clip with John Travolta in that absurd leisure suit, coiffed hair, and silly pose on the dance floor (though you can see it as the still-screen image in the above clip).
*******


This is my promised jukebox Saturday night entry. I'm back in D.C. and home in my apartment on this cold Saturday night (although the radiator has it sufficiently warm in here). I went to the gym and had a good three-part workout -- jogging, weight-lifting, and swimming -- and then went grocery shopping at the small Best Supermarket next door rather than the Safeway or Harris Teeter. My trip was a good one (see previous entry). 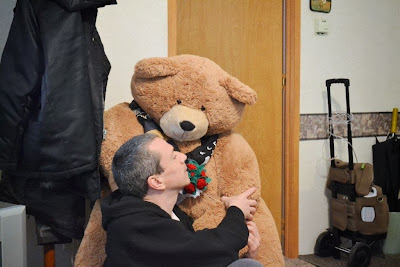 This is a better version picture of me with the giant stuffed teddy bear in my mom and Ray's place in Millersville, Md. Ray took this one on Thursday (Thanksgiving) morning as my mom took the one with my cellphone that I posted in this entry.
*******
I also had a decent phone conversation with my dad. (He is moving into a trailer WITH Shannon near the beach on a remote stretch of the Florida Atlantic coastline in unincorporated Flagler County north of Flagler Beach. Guess I won't be going there.) 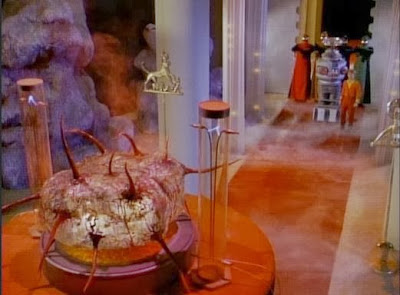 I'm home now watching the Me TV Sci Fi Saturday Night line-up. Right now it is Lost In Space -- the suitably bizarre episode Ghost Planet ("the Kingdom of Cybernetics!") episode. Above is a screen shot from the episode featuring the central cybernetic brain. 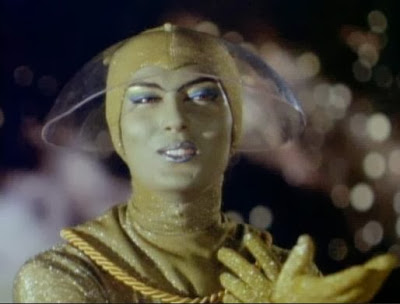 A picture of "The Green Lady" of "The People of the Green Mist" in the Lost In Space episode "Wild Adventure" that was on Me TV last week and that I discussed in this entry. The actress Vitina Marcus played her (she is still alive and 76 years old and has a website, although I did not go to it). Check out why she showed up on the local news in Las Vegas (where she lives) this past June.
*******


Now to celebrate the start of the Christmas season ...
"Christmas Canon" by the Trans-Siberian Orchestra from its album The Christmas Attic (1998), second of its Christmas Trilogy series.
The piece is, of course, a variation of Johann Pachelbel's Canon in D Major with lyrics added. This particular video (year uncertain but probably mid-2000s) features a children's choir accompaniment, though I'm unsure if they are part of the "TSO" or just for particular shows.
*******

And let's end with something a little more upbeat ...


OK, that's all for now. As for tonight, I intend to go to Old Ebbitt Grill and then to No. 9 and/or Nellie's. My next entry may / might not be until Wednesday or Thursday night. I have some additional photos from my Thanksgiving holiday visit to see my mom that I'd like to post.
Updated 11:55AM 12/1/2013:

So I unexpectedly had dinner with Chris H. last night at Trio before going to Larry's Lounge where I met LP, and thereafter we went to Nellie's. All in all, a very nice night, although I spent a large amount of money (after several days of rather low expenditures). As for today, it's all work editing the Smart Grid report, though right now I think I'll sleep a couple more hours. Again, my next blog entry likely will not be until Wednesday or Thursday night.
--Regulus
Posted by Regulus at 10:02 PM