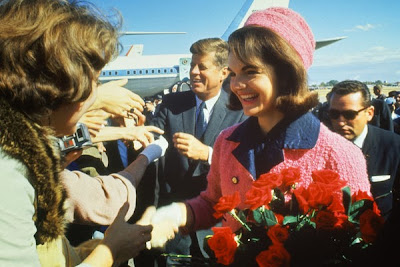 President Kennedy and First Lady Jackie Kennedy arriving at Love Field in Dallas, Texas on Nov. 23, 1963 shortly before the president's assassination, or alternatively, their and the country's awful rendezvous with a terrible destiny.
*******


The New York Times recently had a story about that deep pink Chanel suit she was wearing that terrible day. It's locked away at a National Archives facility -- the NARA Archives II facility in College Park, Md., I suspect -- away from public view until 2103.
I'll spare everyone the Zapruder film, especially Frame 313. I think we've all seen quite enough of that horrifying image. I will say that the full horror of what transpires -- including Jackie Kennedy, likely at that point essentially blacked out of ordinary consciousness, attempting to climb out of the back of that foolishly wide open car -- really was lost on me until I became an adult. I mean, you see that image so many times growing up, but just exactly what is going on -- the full mind-numbing horror of it -- is lost on a young mind. 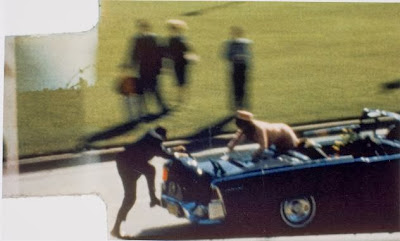 Frame 372 of the Zapruder film.
However, I will post the above image -- what, I believe, is Frame 372 (or thereabouts) of the Zapruder film -- showing Secret Service Clint Hill stopping Jackie Kennedy from climbing out. He may have very well saved her life since she probably would have fallen off the back of a car moving at high speed.
Of note, Clint Hill is still alive. He is 92 and living mostly in obscurity, possibly in the D.C. area. 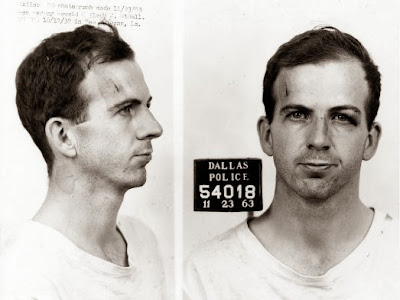 Lee Harvey Oswald's mug shot taken by the Dallas Police Department shortly after he was apprehended as a suspect in the killing of Dallas Patrolman J. D. Tippit, who was killed by Oswald when he attempted to stop and question Oswald in connection with the assassination.
*******


By the way, I fully accept the well-established account that it was Lee Harvey Oswald -- and Lee Harvey Oswald alone, a mentally troubled Marxist -- who slayed President John F. Kennedy.
As Gerald Posner wrote 20 years ago for the 30th anniversary, Case Closed. (Posner himself is a strange figure who has a bit of a troubled professional history who, oddly enough, hired Mark Lane as his attorney in a threatened case against the Miami New Times arising from plagiarism allegations.) 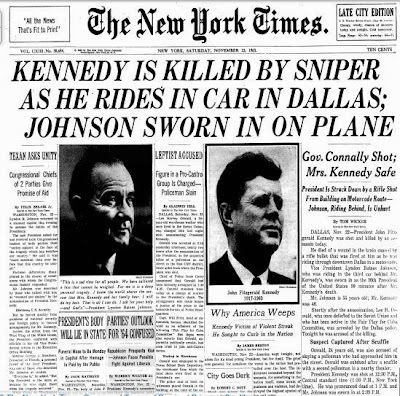 
It has been remarked by insightful observers that what we had was a situation in which Dallas was a cauldron of rightwing anti-Kennedy hatred at the time and yet it was this weird little gun-toting Marxist, a loner and attempted defector to the Soviet Union, who killed the president. Oswald alone it did -- no other person or group of people. Period. 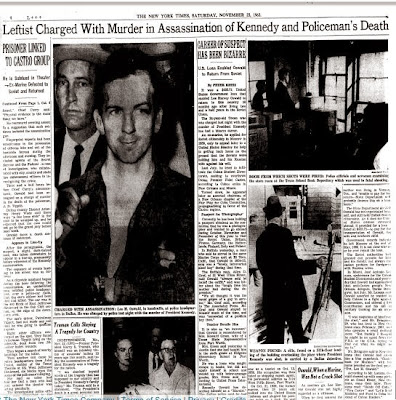 
I realize that nothing will change America's weird paranoia and conspiracy-mongering over this topic, but I just wanted to state my own views on this blog. 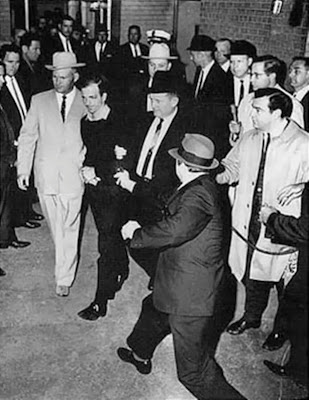 Also still alive is Jack Leavelle, the Dallas Police Department detective (in the white suit and white Stetson) who was escorting Oswald from an interrogation to a city jail on November 24, 1963, two days after JFK was assassinated, when Ruby charged forward and shot Oswald, who died a short time later at Parkland Hospital (where JFK was pronounced dead two days earlier and where Ruby himself would die a little over 3 years later). 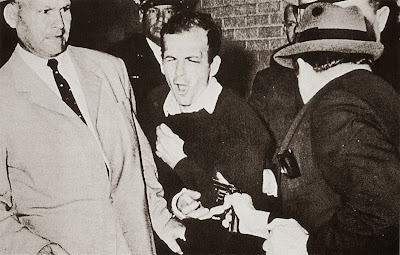 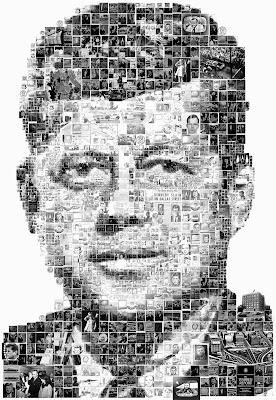 I wanted to post a link to this house (unsigned) editorial in the Dallas Morning News commemorating the 50th anniversary of the assassination -- which Dallas marked in an official way, the first time it has ever so marked the event. The JFK montage image is from the online newspaper site.


(The link is embedded in the title): Editorial: Nov. 22, 1963, a date Dallas will never truly get beyond.
Also, here is a link to an excellent WaPo article about the life of Abraham Zapruder including his background, details of the day he took the infamous home movie of the assassination, and his life thereafter (he died in 1970). The article (link embedded in headline): As he filmed, Abraham Zapruder knew instantly that President Kennedy was dead.
End update.


Imagine how different history would have been if JFK had lived. Well, for that matter, ditto Abraham Lincoln. But the past can't be rerun, so it's sort of a meaningless question.
Anyway, last May, the loooong-retired, now 93-year old Mr. Leavelle was given a long-overdue Police Commendation Award and the Dallas Police Department's Detective of the Year Award was officially renamed in his honor. I wrote about it here.
Several related odds and ends ...


First, on a personal note, I remember what a fuss there was at the 30th anniversary in 1993, except at that time, I was just 23 years old -- and thinking how long ago it was. I was already in College Park at that time at UMCP. 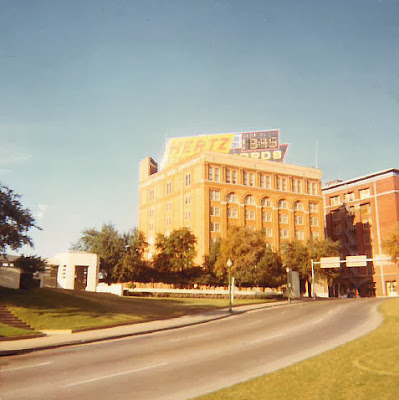 Dealey Plaza and the Texas School Book Depository as it appeared in Nov. 1969 (still basically unchanged six years after JFK's assassination with the Hertz car rental sign with time display still atop it). This was the month I was born.
*******


Secondly, I was in Dallas at Dealey Plaza on a hot day in (I think) August 1981 (it was certainly in 1981 when I was living in Killeen with Ray and my mother as Ray was stationed at Fort Hood, Texas). At that point, the Sixth Floor Museum was not yet open -- what as then the old Texas School Book Depository was mostly just empty, although the Hertz car rental sign and time display was already gone. 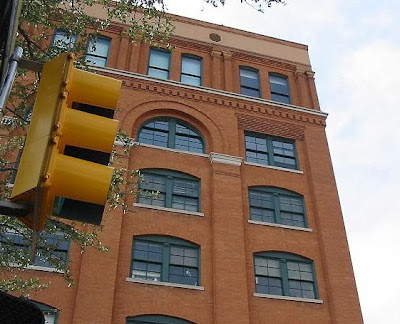 The corner of the former Texas School Book Depository -- now the Dallas County Administration Building -- including the sixth floor window (second from top, far right) where Oswald fired the shots that killed JFK.
*******


Thirdly, my late paternal grandmother loved JFK so dearly -- but by the time of his assassination, it was barely 8 months after her son, my late namesake uncle, had died at age 19, and she was still in a terrible state of mourning.
Finally, there is mass at St. Matthew's Cathedral here in D.C. tomorrow at 530PM in honor of JFK. I may try to go to it, although it will likely be mobbed. That is the place where his requiem mass was held on Nov. 25, 1963 (six years and 1 day before I was born).
Finally, I guess it's wrong to post this famously photoshopped image of Oswald being fatally shot, but I will do so anyway. 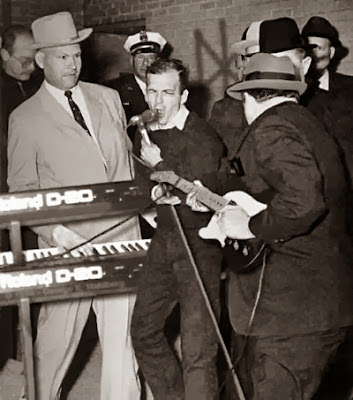 
OK, that's all for now. As a quick personal update, my day started out rather badly -- owing to arriving at work late following emotionally ghastly commute via the Metro -- by which I mean I was in a horrible state of mind, though nothing in particular bad happened.

However, the day slowly improved, and I finished editing a chapter of a major report, got a new assignment, and stayed until 715PM before going to the gym. I went to the National Capital YMCA rather than the Anthony Bowen YMCA. I still got in a 5-1/2 mile jog in two 30-minute intervals,  but skipping any weight-lifting.

Thereafter, I went swimming in the big pool for a half hour. It is so incredibly clear now the visibility underwater (with goggles, of course, and I'm unsure if it's because of the general scrub-down and maintenance done on it earlier this month, or if it the new lighting in the natatorium or some combination. (The pool is the only aspect of the National Capital YMCA that is much better than the Anthony Bowen YMCA with its medium-sized pool with no deep end.)
I then stopped at D-I-K around 1030PM and had dinner downstairs at the bar where Chris H. was working, and then I came home and wrote this entry while watching the usual Antenna TV old sitcom line up (presently, Bewitched).
And there you have it. My next planned update will be on Saturday.
--Regulus
Posted by Regulus at 2:14 AM