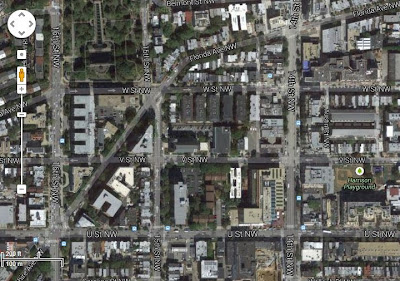 Google aerial map of the area in question discussed in my entry below. Of note, I live in the blocky "downward" (southwestward) pointing "C" shaped building in the lower left (2013 New Hampshire Avenue / the Hampton Courts) between U, V, and 16th Streets. The Anthony Bowen YMCA is at W just beyond 14th Street, though this image may have been before it was rebuilt.
*******


Apologies, but no meaningful entry tonight and no pictures except for the lead one. I may update this entry with some additional pictures when I have an opportunity.
I'll try to post one either tomorrow night or on Saturday though my next full one may not be until Sunday or Monday. I'm not feeling that great right now -- not because I'm sick but because I THINK I almost walked into a mugging on my way home from the gym, but I quickly avoided the street (the 1400 block of W Street NW).
I had again gone to the Anthony Bowen YMCA, which except for the swimming pool is a much better facility than the National Capital YMCA and a lot closer to where I live. Anyway, I detoured down 14th Street to avoid that familiar, scary set up: Three (or four) young thugs appearing suddenly out of an alley. They seemed to disappear as I quickly doubled back through the little Valero gas station parking lot next to that Fast Gourmet sandwich shop and down 14th Street and the "long" way home.
I've been mugged twice before in D.C. -- both times involving four young black guys, both times in the late 1990s, hence my extreme caution based on "racial profiling." I mean, what was I supposed to do -- stop and have a discussion about "cultural expectations" that some idiot ultra-PC liberal college professor taught me once living in his upper middle class enclave? Maybe The WaHoPo editorial board will have the answer: Free Trade, entitlement reform, "worker retraining" and "more stringent" gun control for the already unarmed.
This potential near-mugging kind of bothered me because it made me realize -- in case I had forgotten -- that no matter how much Washington, D.C., has improved over the past 20 years, it still is very much an "American" city with American urban pathologies.
Interestingly, on my way there, I inadvertently walked on New Hampshire Avenue (where I live in the 2000 block between U and V Streets -- bypassing W Street -- and along the "kink" where it ends and becomes Florida Avenue (itself a rather disjointed street in the city, the old "Boundary Street" marking the edge of the City of Washington within the Territory of Columbia). I say interesting because I thought to myself how nice the houses on those two streets looked.
As for New Hampshire Ave., heading to the northeast, it dead ends at this "kink" just above W Street only to start up again at Park Rd between 11th St. and Sherman Rd. (still a scary part of the city) -- whereupon it circuitously runs for about 25 miles into suburban Maryland as Rt. 650 to just beyond where it intersects Georgia Ave. / Rt. 97 in Gaithersburg near the Montgomery / Howard County line and thereafter becomes Damascus Rd., which for its part eventually becomes Rt. 108 as Rt. 650 vanishes and runs to Damascus, Md.
Anyway, I got home physically safe and sound I made dinner and did my laundry and I'm watching my late night TV (Antenna TV lineup including Maude, I Dream of Jeannie, and Bewitched), but now I am going to bed.
I was going to write about how much I like the Anthony Bowen YMCA, with the exception of the pool, since the National Capital Y's pool is a lot bigger with a deep end and following the shutdown / cleaning / retiling / relighting has incredibly good visibility across the entire pool (as seen underwater while wearing goggles).
While the new treadmills at the National Capital YMCA are distinctly worse than the previous ones with less functionality and more difficult to operate and maintain, the ones at the Anthony Bowen YMCA allow you to go on the internet AND follow routes through choices of stunning scenery (I chose some national parks on the South Island of New Zealand).
OK, that's for all now.


As for my next full update, I'm not sure. I have plans on Saturday night (a Medieval Madness night with AP & Co. in Old Town Alexandria) and Sunday during the day (walk with Gary).
Also, there is a memorial service for Darrold Hunt tomorrow at the National Swedenborgian Church / Church of the Holy City on 16th Street at 7PM. I intend to go to that. I wrote about him in this entry. He passed away last week. His brother has come to take him to a final resting place and settle his affairs.
OK, I think that's all for now. Goodnight.