Armistice Weekend and the Entry That Wasn't 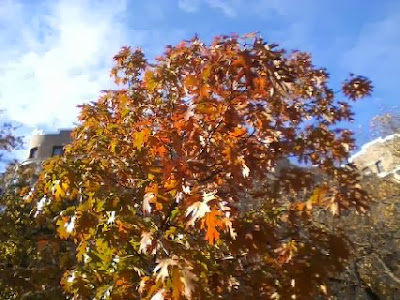 
This entry features some pictures that I took over the past three days during the Veterans (Armistice) Day holiday weekend. I don't have a particular theme.
I'm home at the 11PM hour as I write this watching reruns of Maude on Antenna TV. This is about as close to reruns of The Golden Girls that I can get on television during Hallmark Channel's endless "Countdown to Christmas" period.
Today was an OK day, including a good gym workout and a nice time at Larry's Lounge this evening with LP and Kristof. However, I noticed while at the gym that I am really not an attractive person -- in fact, I'm pretty much ugly. I look like a weird ashen-faced leprechaun. And losing 40 pounds has just made my face look almost gaunt -- even while my body still manages to cling to some mid-section and back-end flab because that's the joy of no longer being young. In my case, though, dear reader, I'm not straight and married with kids living in suburbia, my wife having long since turned me into a combo marshmallow and buccal-pumping frog. 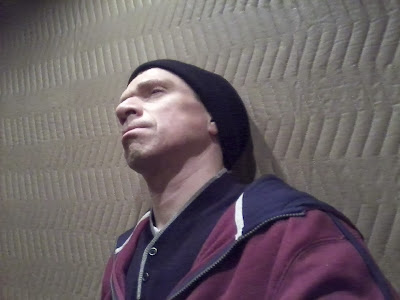 Yours truly in one of the two elevators in my Hampton Courts building, Washington, D.C., 1:28AM Nov. 9, 2013.
BTW, I hate, hate, hate elevators -- if I could live and work no higher than the 3rd floor my entire life, I would do just that. I am basically afraid of them and CANNOT blithely walk into one as the door is closing. Trouble is, I live on the 5th floor and work on almost the top floor of an office building.
******* 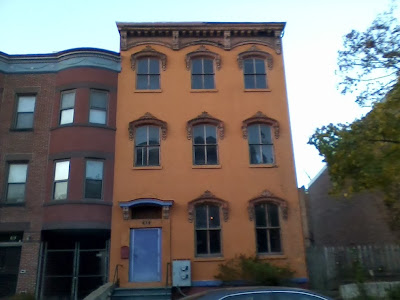 The row house at 415 M Street NW, Washington, D.C., 4:51PM Nov. 10, 2013.
I took a bike ride on Sunday evening that brought me first to Nellie's ... then on a zigzag route ultimately to Penn Quarter -- such a strange part of the city -- where I stopped at a curious restaurant / bar called Carving Room ... then down the National Mall on a blustery, gusty early night from near the U.S. Capitol Building and past the National Air & Space Museum, the Washington Monument, the World War II Memorial, and the Lincoln Memorial and over to Georgetown, where I stopped at Nick's Riverside Grill ... and thence back to Dupont Circle to Larry's Lounge, where it ended up a real show. I won't even mention how much money I spent. Oh, yes, I did get the bicycle back from LL tonight.
******* 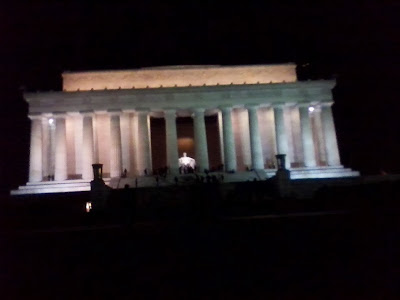 
Turning to the weather ... A powerful cold front is forecasted to sweep across the eastern United States and off the East Coast by Wednesday. There is a chance of some light rain and snow showers even here in the D.C. area. Whatever happens is very likely to be light.


Actually, at this point, I'm just too tired to post an entry, so let's just hold off until perhaps tomorrow night. I may update this entry with additional photos at some point.
--Regulus
Posted by Regulus at 12:30 AM