Another "Aural" Migraine; Some Thoughts on Darrold Hunt; and Friday Night Return to Me TV 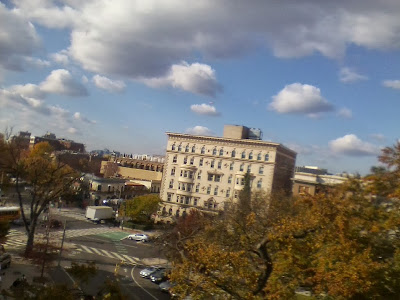 A not so very brief update this Friday night.


For starters, I updated my previous entry to reflect the (very) good news that Super Typhoon Haiyan that struck the central Philippines was not as bad as feared. I am curious about why the satellite-estimated intensity may have been off so substantially.
Secondly, I was stricken with another migraine headache today that was preceded by the "aura" prodrome of flashing / scintillating lights in my left peripheral vision and weird jagged "striations" along with other shifting geometric in my field of view. Unlike the last time it happened, I had a pretty good idea that it was "just" a precursor to a migraine. However, it lasted a lot longer than the last time and the headache is more persistent. 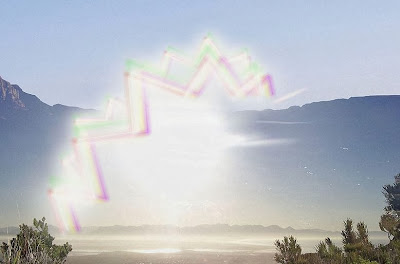 Artists rendition of the aura symptom that sort of captures what one sees -- except the images are flickering and moving very quickly.
*******


Nevertheless, I just pushed through my day, though between the migraine, the fact that it was the Friday before a long holiday weekend (Veterans Day) and the office and building were semi-empty, and an unusually timed but very pleasant lunch with AP at the L'Enfant Plaza Hotel bar called the Foggy Brew Pub. 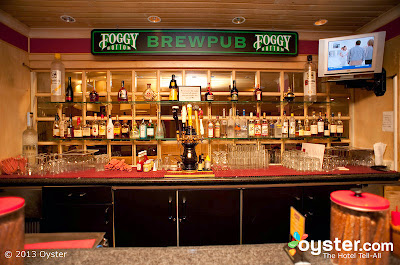 Picture of the Foggy Brew Pub I found online.
Of note, the entire hotel and everything in it are set to close on Dec. 3, 2013 and undergo a major renovation -- part of the long-term major renovation of all of L'Enfant Plaza. 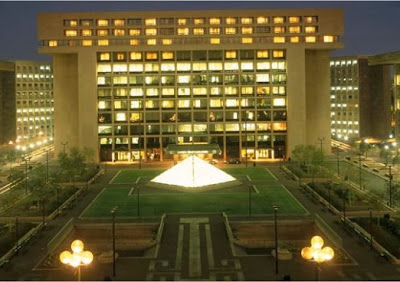 The nighttime view of the L'Enfant Plaza Hotel with the illuminated glass pyramid on the courtyard. This entire area is under massive, noisy renovation and the pyramid was taken down (jackhammer destroyed) back on May 8, 2013. I wrote about this and posted some pictures of its destruction in this May 9th, 2013 entry.
*******


Prior to posting this entry, I found this Washington Examiner obituary as well as some additional online photos (whaddaya know, the Examiner proved useful for ONCE). The obituary, contains additional info and a picture taken a number of years ago.
It is with sadness I note the passing of a Larry's Lounge bar acquaintance named Darrold Hunt. I really should write an entire entry dedicated to him. As my bar friend Bob explained to me, Darrold was found dead in his apartment on Nov. 6th by D.C. paramedics after he (Bob) called 911 following word that he had failed to show up at a weekly class involving musical conducting. A few days earlier on Sunday, Bob had called the ambulance for Darrold after Darrold called Larry's Lounge asking for him and was incoherent on the phone. Darrold stayed overnight at GWU Hospital but was subsequently discharged the next day. There is some indication his medications may have been changed. 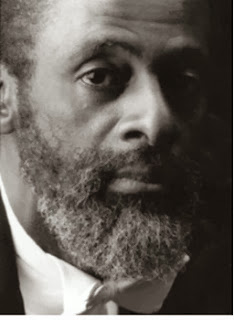 Darrold, a native of New Bedford, Mass., was an elderly man in his early 70s with health issues (in particular, epilepsy with occasional seizures) who had come to D.C. decades ago by way of a life path that took him to New York -- he graduated from Julliard -- and Hollywood in the early 1960s -- when being a gay man, much less a black gay man, was not easy.


I believe he lived in Baltimore for a while and was an associate conductor of the Baltimore Symphony. This would have been in the mid-to-late 1970s. He also was guest conductor at a variety of other orchestras including the National Symphony.
I may be a bit off on the years.


Music and conducting orchestras was Darrold's passion in life. He had founded the Urban Philharmonic Society in 1970. He had hoped to start his own orchestra that survive him, but he was an elderly man living on public assistance. He did try, though, spending his days making phone calls and trying to find donors and benefactors. 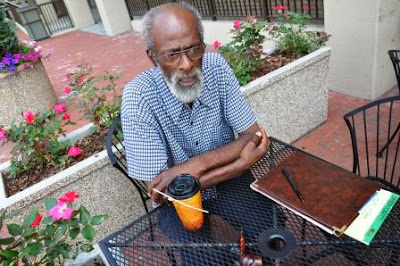 Darrold was engaging and articulate (I had conversations about cosmology and astrophysics with him that shaded into religion and he readily followed my train of thought). Despite his age, he was also powerfully strong when he hugged you with his tall, very thin and wiry frame. I would not want to be head-butted by him -- he would have knocked you out cold. He had a gruff beard that had turned white and he walked with a bit of a stoop that somewhat lessened his 6 foot height. I remember once some young white, straight guy at Larry's Lounge drinking with his friends watched him as he left, calling after him "Black Jesus."
It was very rude from some young yuppie punk, but it also on a deeper level was suitably appropriate.
Darrold is survived a brother and a sister. The brother is the an Episcopal AME minister in Rochester, N.Y., while the sister may work either as a travel agent or for an airline and lives in Chicago. He had a long-term partner that he had reconnected with (by phone, I think) in the past year. At this point, I don't know about any services or where he will be interred. He had long since left New Bedford and had no connections there -- for the past few decades, Washington, D.C. and the little bubble of Dupont Circle were his world. However, his sister had paid for Darrold to go on a trip to Paris last year, where he stayed with some people he knew (I'm unsure in what way).
I had last seen him on Oct. 27th at Larry's Lounge. I arrived to meet Wendy to go to dinner (we've done it two Sundays in a row now). 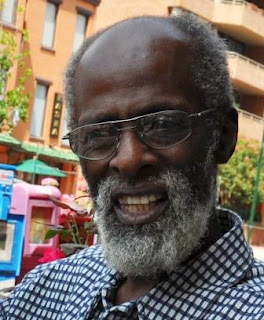 He was seated at the bar with copies of both The Washington Post and The New York Times print edition, and he proudly explained how he had gotten copies of both for free. We chatted about this article. That was the last time I saw him. Darrold tried to be a better friend to me than I was to him, and now it's too late to correct that.


Goodbye, Darrold. May you joyfully conduct the angelic symphony orchestra.
UPDATED 6:35PM 11/16/2013: Please see additional information on Darrold's life in this entry following his memorial service that was held on 11/15/2013. I will also post another link here to my planned subsequent full entry on Darrold, although I'm not sure when I will have that entry completed (it may be a couple of weeks).
End update.


OK, I guess that's about all for now. As I said, I'm not feeling very well, though I did take (after the fact) one of my Imitrex. I'll try to go out tonight -- my usual weekend night routine -- but we'll see. 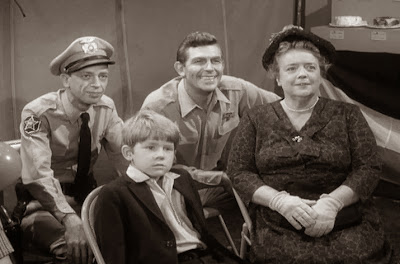 I'm watching on Me TV (where else??) the 1986 movie Return to Mayberry with the late Andy Griffin, Ron Howard, and Don Knotts all reunited as the cast of The Andy Griffith Show. (Frances Bavier was still alive but was in poor health and declined to participate.) That movie was 27 years ago -- now one year longer ago than the making of the movie was from the start of the series in 1960.

Oh, yes, I went to Macy's at Metro Center tonight and bought quite a bit of clothing on a long-delayed shopping excursion. I spent a lot. Even with the 25% off coupon, I still spent just under $390, but I got a lot of clothes that I need. This included two new pairs of pants (34 waist! / 30 length); two four-packs of boxer briefs; a one four-pack of t-shirts; a sweater; a shirt; one six-pairs and one two-pairs of socks; two pairs of gloves (since I'm sure to lose one pair this winter); and a Nautica fleece hoodie.


OK, that really is all for now. I intend to post a jukebox Saturday night entry tomorrow but nothing else.
My next planned regular update will (shall?) be either Sunday or Monday.
--Regulus
Posted by Regulus at 9:44 PM