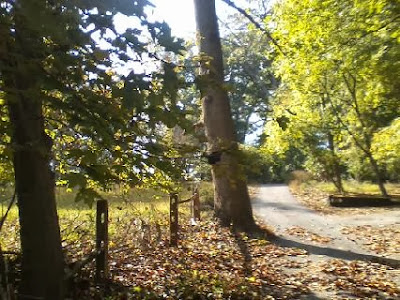 
This entry contains the pictures I took on my bicycle ride last Sunday as described below.
I was going to post a follow-up entry to my morning one that included more on today's rainy deluge -- the three-day area-wide totals are now in the 4 to 8 inch range, and it is still raining in intermittent heavy bursts tonight here in D.C. 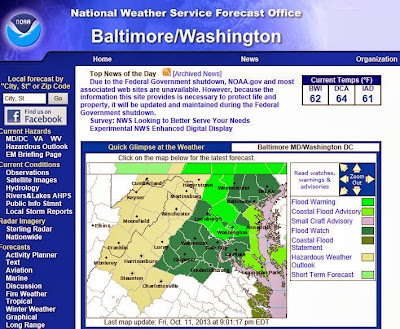 Sterling (LWX) county warning area (CWA) advisories as of 9:01PM EDT Oct. 11, 2013 showing a variety of flood watches and warnings across the Washington and Baltimore areas.
*******


I was also going to post some political commentary on the ongoing Federal Gov't shutdown (still no end in sight), still-impending Treasury Dept. borrowing limit / potential default (a short-term limit increase is still quite likely), and collapse in Republican Party support with attendant intraparty chaos and recriminations. 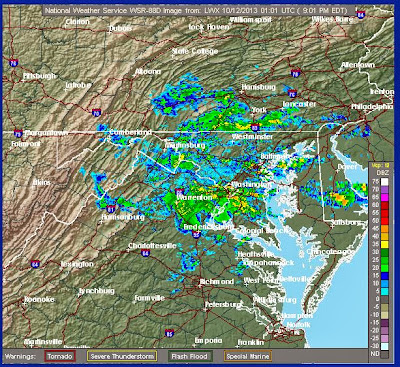 
However, at this point, I think it better if I just try to post my bicycle ride pictures. I'm supposed to go out later to meet this guy Roy and his girlfriend (Roy is Imara's friend and I met him through Andrea) before they return to New York City on Monday.  And so therefore, without further ado ...
The Bike Ride Blog Log 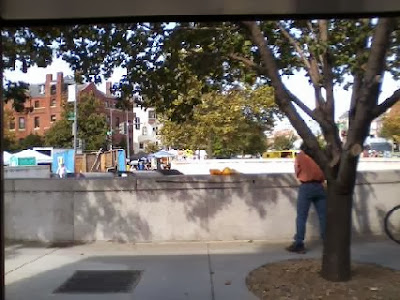 Dupont Circle Metro on the Q Street NW side, Washington, D.C., 1:13PM October 6, 2013.
I took my bicycle on the Metrorail Red Line starting at Dupont Circle and ending in Rockville, where I started a wending, circuitous, approximately 4 hour bike ride that I estimate was about 24 miles and included stopping for lunch at the Potomac Village Shopping Center, and occasionally walking the bike along shoulder-less, hilly roads (chiefly Glen Mill and S. Glen Roads) in super-wealthy Potomac or in the forest of what is either Great Falls National Park or the Chesapeake and Ohio (C&O) Canal National Historical Park (my understanding is that the Great Falls Park is technically on the Virginia side but I may be overly legalistic in my interpretation -- as it is, the website is Teabagged shut down so I can't look it up).
******* 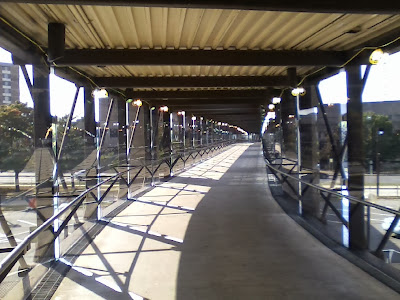 
Eventually I found the C&O Canal towpath and biked on it from mile marker 11 all the way to about mile marker 3, where I picked up the Capital Crescent Trail and continued into Georgetown, where I stopped for a nice dinner at Chadwick's in my favorite seat. Thereafter, I biked back home (I'm sort of at the edge of Dupont Circle and Shaw), stopping at Larry's Lounge. 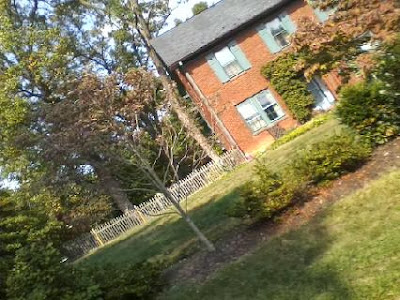 A house at the corner of Harrison and Upton Streets, Rockville, Md., 2:16PM October 6, 2013.
Way, way back in the summer of 1992, I lived for about two months in the upstairs part of the house at 402 West Montgomery Avenue. I wrote about this over 5 years ago on this blog (yes, the quality of the cellphone REALLY and TRULY suck). (That lady, Sandie, no longer lives in that house.) That avenue is the main thoroughfare through Rockville but there are a maze of side streets such as Harrison and Upton Streets and Anderson and Forest Avenues with beautiful homes along them.
******* 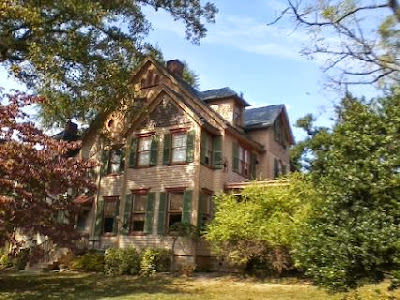 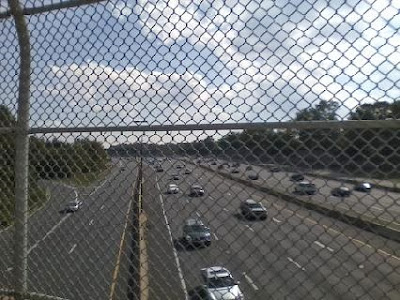 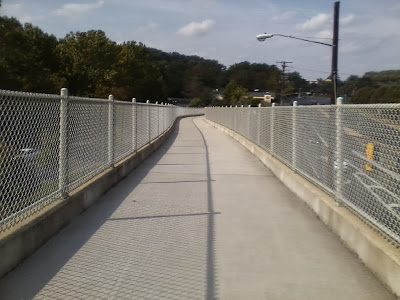 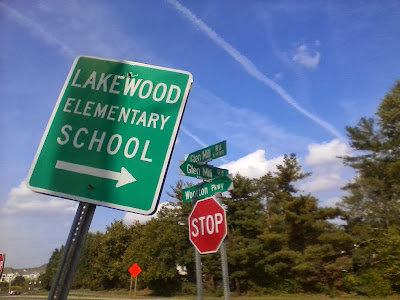 The intersection of Glen Mill Rd and Wootton Parkway, Rockville, Md., 2:35PM October 6, 2013. This was the start of Glen Mill Road, along which I road for at least five miles.
I sort of knew the way to go based on studying my trusty old ADC Atlas of D.C. and surrounding areas.
******* 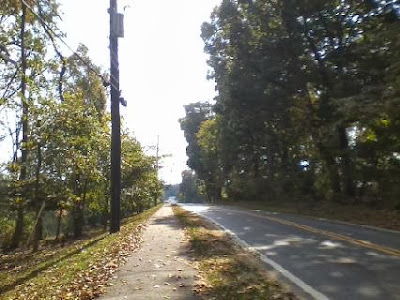 Glen Mill Road along Lakewood Country Club with its sprawling golf course, Rockville, Md., 2:40PM October 6, 2013.
This is an elevated spot with a sweeping view to the southeast -- you can see the buildings in Bethesda rising above the distant line of trees. On the other side of the street is a large, squat blue water tower atop the hill that is sort semi-hidden in the trees.
******* 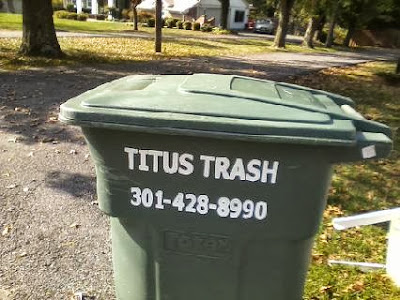 Trash bin along Glen Mill Rd., Rockville, Md., 2:44PM October 6, 2013.
I was going to send this picture to my mom because the name on here is my stepdad's and her last name, but then I realized she would not find that funny.
Actually, it wouldn't shock me if this company or whatever it is in fact is owned by some distant cousin of Ray.
******* 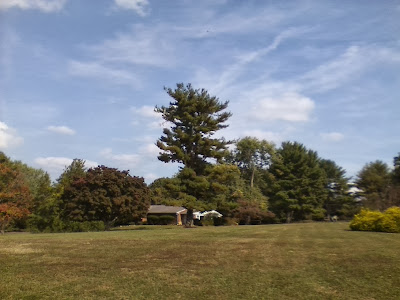 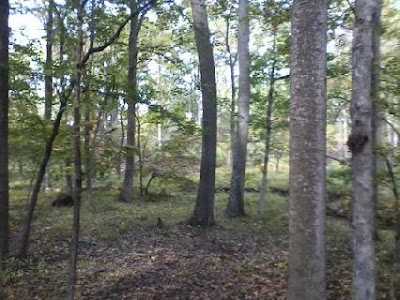 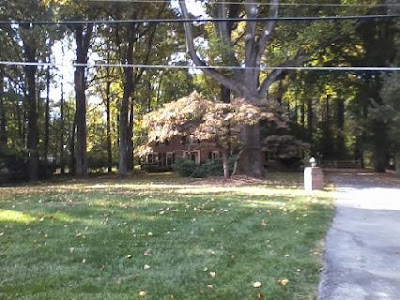 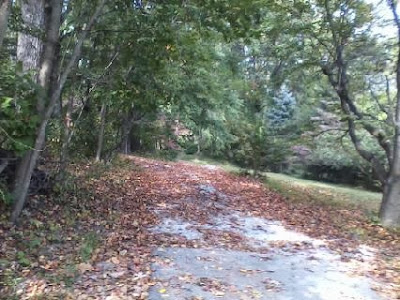 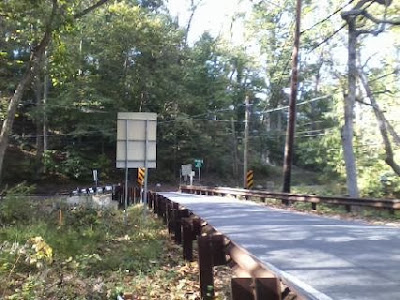 This is a view of the somewhat complicated intersection of Glen Mill Road, S. Glen Road, and Glen Road at Watts Branch stream (which actually passes under S. Glen Road), Potomac, Md., 3:04PM October 6, 2013. There really are no shoulders here and it is a surprisingly busy intersection at times.
******* 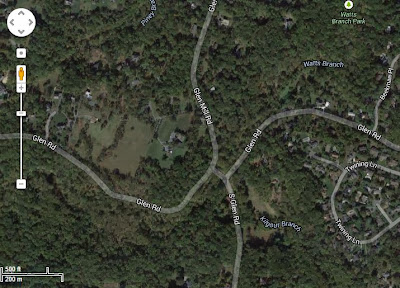 Google aerial view of Watts Branch Regional Park with the three "Glen" roads highlighted / labeled, although the roads are really not visible through the tree canopy so this map sort of highlights with transparent bands where they are located.
******* 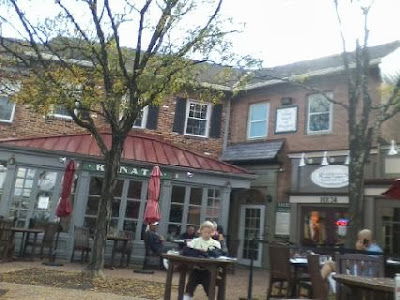 
One, way back in my annus horribilis 2004, I tried to get a job at a tutoring place located there and I totally f!ked up the interview when I was asked to explain -- as I would to an 8th grader -- some law about triangles and their interior angles. This was after I did very well explaining why lightning and thunder exist. As it is, I could not have handled that job -- it was too far and tutoring kinda sucks, at least it did when I worked a few years later with the student athletes at UMCP. Granted, that is a different type of population.
Two, while there, I nearly purchased uncooked crab meat but the young lady stocking the refrigerator pointed out my mistake.
*******


After leaving the shopping center, I biked down Falls Road to MacArthur Blvd., where I decided to dive into the forest to find the C&O Canal towpath. The forest is either part of Great Falls National Park or the Chesapeake and Ohio (C&O) Canal National Park. I'm not sure. As it is, the park was closed due to the Federal shutdown but people were still on the trails. 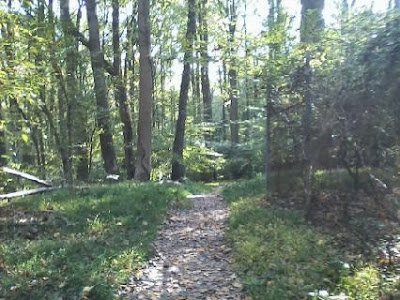 Forested trail in Great Falls National Park and/or C&O National Historic Park, 4:03PM Oct. 6, 2013.
I was on a path called the Falls Road Spur but soon got hopelessly lost on the Gold Mine Loop when I started to backtrack after 20 minutes or so. At one point, it was rather dark deep in the forested gloom as the low-angled Sun went behind a cloud and I even almost panicked. But I eventually found the Woodland Trail that was the way out -- back to MacArthur Blvd.
******* 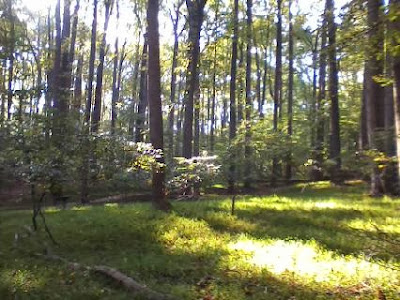 More forested trails in Great Falls NP and/or C&O NHP, 4:07PM October 6, 2013.
I had an idea of the trail I was looking for because two different people I encountered showed me a map on their iPhones.
Soon the forest gloom gave way to a golden sunlight filtering through the forest and its late season green leaves, and finally I could see through the trees the more distant shoreline of Virginia. The Sun reflected dazzlingly off the Potomac. Finally, I emerged from the forest on a spur that led to a parking lot along MacArthur Blvd, perhaps half a mile "downriver" of where I started.
******** 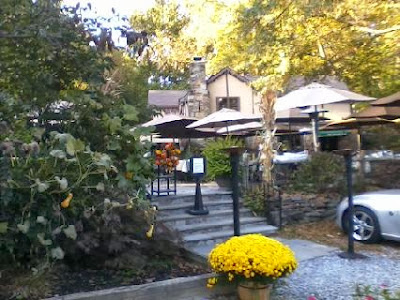 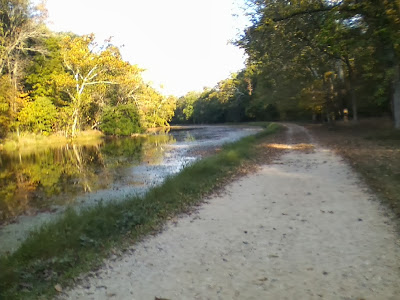 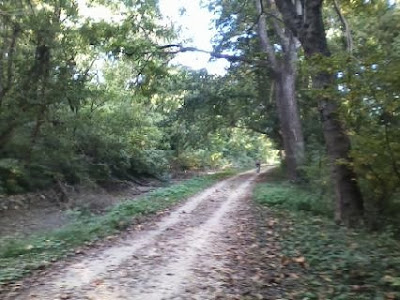 And this is near mile marker 10 along the towpath, Potomac, Md., 5:26PM Oct. 6, 2013. (I also posted this picture in the Oct. 8th entry.)
In theory, I'd love to take a mountain bike out to Cumberland and bike the whole path back but that might be a bit tricky, and I'd have to have some idea where I would stay at night (I can't sleep outside -- I need a sort of Motel 8 baseline of accommodations).
******* 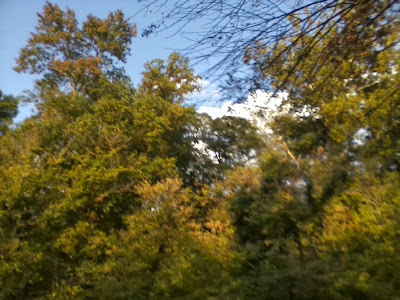 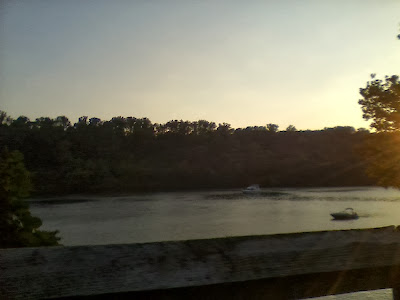 The Potomac River at dusk in the Palisades section of Washington, D.C., 6:07PM Oct. 6, 2013. The Potomac is a strange sort of river -- there is always something not quite reachable / understandable / knowable about it. Plus it is surprisingly dangerous with its undertows.
I was already on the Capital Crescent Trail at this point -- the towpath and the "CCT" run parallel for a time around mile marker 3 of the former.
******* 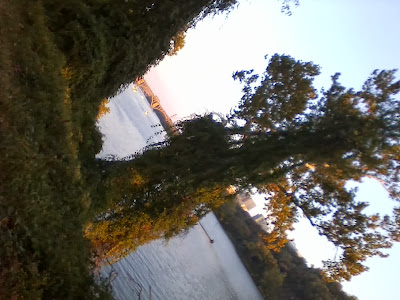 A view toward Washington, D.C. and Rosslyn (Arlington) on the Virginia side from the "CCT" just before the Key Bridge, Washington, D.C., 6:08PM October 6, 2013.
Yes, that is the Washington Monument barely visible poking up (all covered in scaffolding) on the right side of the invasive-vines covered tree and on the other side (visible as a blur in the image) is that 1812 N. Moore Street skyscraper.
******* 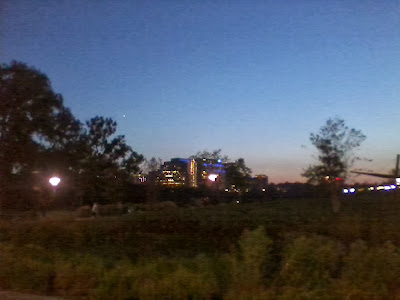 The view of Rosslyn at dusk from the Washington Harbour area in Georgetown, Washington, D.C., 7:10PM Oct. 6, 2013. I had just had dinner at Chadwick's and returned to my bike, which was locked up at a bike lock where I left it.
That bright point of light low in the sky just above the tree toward the left side is Venus and JUST BARELY visible over the rightmost skyscraper in Arlington is a very thin, young crescent Moon.
*******


Oh, yes, I meant to mention (and if I don't know, I never will), I actually got a refund for $253 from my former dentist's office. I didn't think that would happen, but my careful and respectful approach seems to have been successful. Recall I "spent" $293 for the start of an unnecessary procedure that I got out of. There was another $40 charge for a follow-up visit, but still, I actually got back $253, and I'm very happy about that. I will use it for another procedure (filling a few minor cavities or near-cavities that apparently I have) with my new dentist scheduled for later this month.)
OK, that is all for now. I will try to post the other weather/political-themed entry tomorrow (Saturday) but will at least post a jukebox Saturday night one.
--Regulus
Posted by Regulus at 10:10 PM