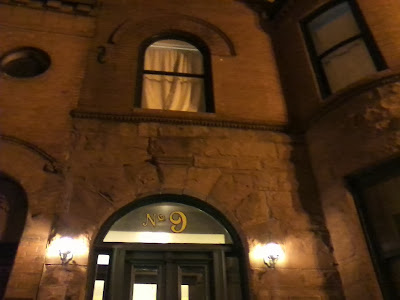 The old, ornate row house at 9 Logan Circle, Washington, D.C., 1:07AM Oct. 20, 2013.
I thought it interesting that it says "No. 9" because I was en route from the bar No. 9 to Nellie's at that point via Vermont Avenue. It's always slightly dicey walking that route but the city has improved so much in the past 5 to 10 years that mostly it is OK to walk on "back streets" at this hour.
******


Well, my weekend was fairly good, I think, although I did not take a bicycle ride on Sunday as I planned (I will try instead to do that bike ride next Sunday). I'm kind of ticked off about that, but I got up too late. In fact, I think I just got fat again this weekend. 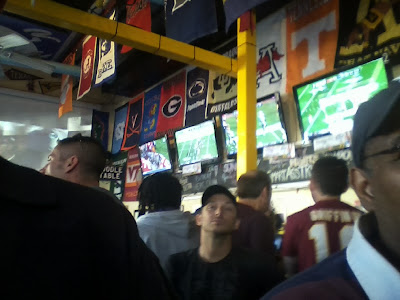 Just FYI -- and I don't except any random American reader who may encounter this entry in the months or years to come to agree -- I abso-flippin'-lutely HATE American football, and I detest the NFL. American football is an awful and violent sport of no point that in its NFL form is the quintessential mega-billion dollar American corporate scam.
More than that, though, I despise to the Nth degree (as N approaches infinity) the frickin' Washington Redskins. Yes, it's a loathsomely racist name, and, yes, Dan Synder is an all-around worthless sack of a human being.

But the reason I hate the Redskins is because of the bogus sense of commonality and unity it gives across racial, class, and (yes) caste lines among D.C. area males that otherwise hate each other and/or (in the case of those in the over-class) are busy exploiting and plundering), at least on the one day of the week.
Here we live in the Emerald City Capital of the (Collapsing) Empire, and the idea that some otherwise shrieking, urine-soaked, bum outside the John C. Young center for the schizophrenically homelessly insane and some member of the oligarchical over-class living in a Potomac or McLean mansion with six BWMs and a Mercedes-Benz in the drive way -- or, for that matter, the corporate stooge tools that do their "legal" bidding -- all like the "'Skins" and have that "in common" is morally offensive to me.
**Updated 11:35PM 6/17/2014: Substantial content removed and altered.** 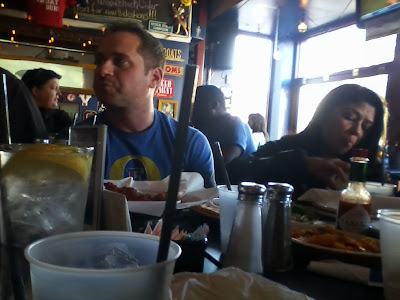 Gary and Gloria at Nellie's, Washington, D.C., 4:51PM Oct. 20, 2013.
The Redskins game was one and everyone was watching it -- including homeless black guys outside peering into the windows at the many plasma screen TV monitors tuned to it.
*******


I was at Nellie's with an unusually large group including Gary (whose birthday was Sunday), Kristof, Gloria, Dilshan, and a couple that Gary knows through one of his sports leagues. Several hours later (after I returned home and posted the previous entry), I went to Larry's Lounge, where there was a big crowd (including Kristof and Gary). 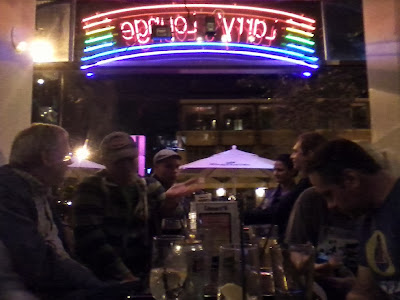 
The only other item of note: Last night Anderson Cooper showed up at Nellie's rather late. (Yes, I was at Nellie's last night after going to Old Ebbitt Grill and No. 9.) I was standing way in the back by the DJ on the upstairs deck. A cold front had blown through and it was surprisingly windy and blustery beneath a slightly-waning-gibbous Moon high overhead. 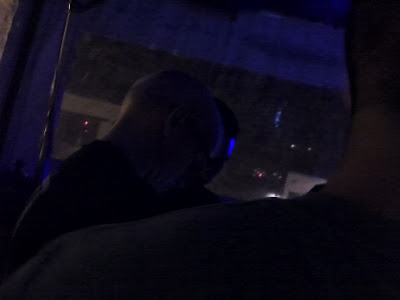 
I was in the corner when I saw all these people making a fuss about a white-haired guy of about 5'10" stature in a dark tee-shirt and black baseball cap. Long story short, it turned out to be Anderson Cooper, and he created quite a stir. People were coming up to him as if he were Jesus Christ.
I said one thing to him -- that I thought the "Are you high?" comment to Alex Castellanos was very funny (Castellanos had made some bizarre comment about bunny sex and Ted Cruz). He just made a weird smile and looked away.
As it is, I got trapped way in the back and could barely move but finally I got out and headed over to say goodnight to Derek and Eric before leaving. 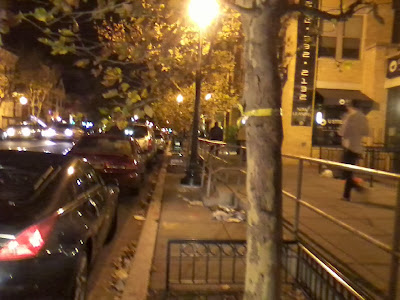 
I guess today was a good day in that I talked to both Gloria and (later at Larry's Lounge) Aris, both for the first time since these disastrous dinners last May and June, respectively.
OK, that's all for now. My next planned update will be either tomorrow night (i.e., early Tuesday) or Wednesday night (i.e., early Thursday).
--Regulus
Posted by Regulus at 1:02 AM