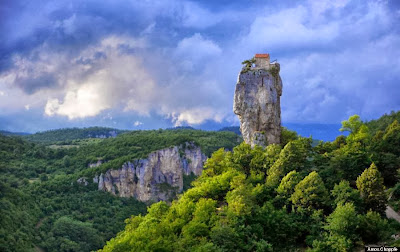 The famous Katskhi Pillar limestone formation with its Stylite monastery atop it located in Georgia (as in the former Soviet republic, not the U.S. State) in a rugged and (to me) surprisingly forested green region. A monk named Maxime Qavtaradze lives there and comes down -- via a 131 foot rickety metal ladder built onto the side of the pillar -- twice week. Read more about Mr. Qavtaradze here and see some more pictures of the place here.
*******


Well, I had intended to post a blog entry tonight, although I wasn't quite sure on what topic since there isn't anything particularly pressing I wanted to relate. On the other hand, the entries I do want to post -- both related to New Jersey trips, one last January and the other in late August -- simply would take too long to write at this late hour on a regular work week night. 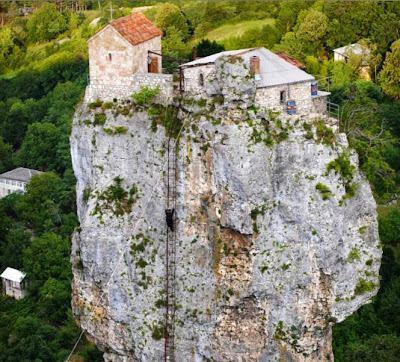 Mr. Qavtaradze descends the ladder to attend mass at a small chapel at the base of the pillar. The chapel is named after St. Simeon, the first Stylite. Young men gather at the chapel to pray.
The ladder is distinct from a winch that is used to ferry supplies to the top.
*******


As it is, I went after work to the gym tonight and had a regular workout (jogging, weightlifting, swimming) over approx. 3 hours. I then came home and made dinner and briefly updated my hidden Arcturus blog, the first time in 10 months. 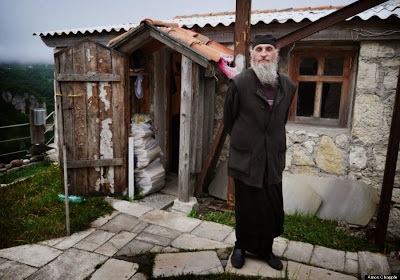 Mr. Qavtaradze stands outside his stone cottage atop the Katskhi Pillar.
*******


As a result, I simply do not have time to post anything and I'm not going to stay up until 230AM writing an entry. Furthermore, my entries are just going to be scarce this week. I may not even post another until Saturday. However, I've written a lot of content in the past two weeks, so if you really are keen on reading this blog, just look at the recent entries. In reality, though, I have very few readers and the ones I have are just intermittent, so that's that. 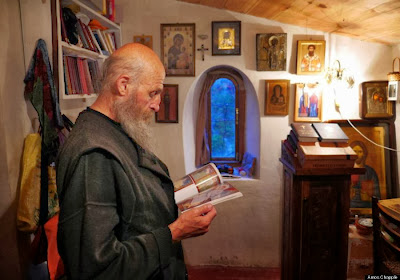 Mr. Qavtaradze reading in his little cottage atop the Katskhi Pillar.
*******


The night is rather chilly across the D.C. area with lows forecasted by morning around 43F in the District proper and mid-30s Fahrenheit in the suburbs and exurbs. There is a freeze watch in effect for the northern and western suburbs but that is for tomorrow night into Friday morning when lows are forecasted to be about 5F colder and go sub-freezing in the watch areas. 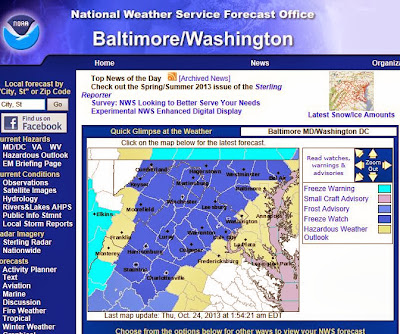 
Also, Sterling LWX had for the first time this season that infernal auto-generated snow forecast map (see below) that in the three winters it has been used (starting in 2010-2011) has been the kiss of death for any snowfall in D.C. proper. (This map was just for light snow on the ridge tops in the Blue Ridge and the Allegheny Front.)
Here is that map ... 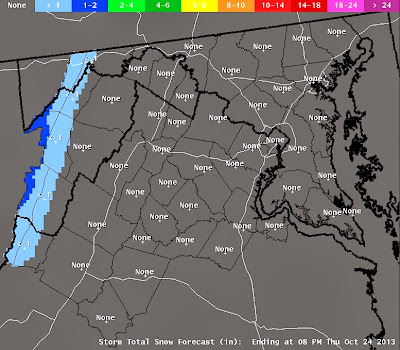 The Sterling LWX auto-generated snow forecast from Wednesday through 8PM EDT Oct. 24, 2013, although the upslope snow showers have since ended.
******


OK, that's all for now. I do not plan on taking the computer home tomorrow night and so my next entry will either be Friday night or during the day Saturday.
--Regulus