"In the City Life" by Gota Yashiki on his Let's Get Started release (1999)
Gota Yashiki's genre is "acid jazz," which according to The Keeper of All Knowledge, Wikipedia, "combines elements of jazz, funk and hip-hop, particularly looped beats" (source here). He was once part of the group Simply Red.
*******

"Jesus He Knows Me" by Genesis on the We Can't Dance album (1991)
I'm not sure how I missed this video by Genesis with Phil Collins as an American-style televangelist raking in huge amounts of money from his followers and living the life of a debauched playboy multimillionaire. I saw it at No. 9 last weekend for the first time (though I've heard the song). The whole video is hysterical, and I really love the wheelbarrows filled with money (between 4:22 and 4:46).
**Updated 9:50PM 11/8/2014: Content removed.**

"How Deep Is Your Love" by the Bee Gees from their Saturday Night Fever: The Original Movie Sound Track album (1977)
*******


As a brief update, I went to the gym earlier -- I got in a full 5 mile jog and a swim but not much weight-lifting. I got to the gym a bit late and only had time to do the jog and swim (the YMCA closes at 630PM on Saturdays).
I only had about 20 minutes for weight-lifting -- and then I got totally distracted by a Star Trek; The Next Generation episode that I started watching while on the treadmill.  (Star Trek: The Next Generation is shown on BBC America, which is one of the channels on the treadmill TVs, muted but close-captioned.) This episode, Journey's End, is quite good all around, esp. with the theme of Capt. Picard to remove Native Americans from their home. It also guest stars Wil Wheaton, who had left the show by that point. 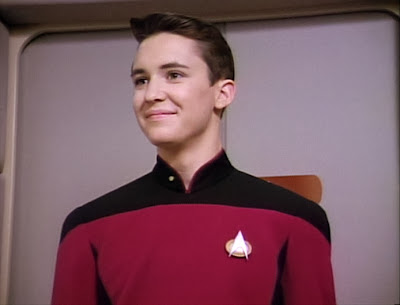 Did I ever mention I actually had an unexpected email exchange with Wil Wheaton once back in 2005? I was working at APS at the time and it was work related -- we were trying to see if we could translate a press release into Klingon (seriously, and, no, we couldn't). The strange part was I didn't set out to e-mail him when I sent a request to some website, but he actually replied, and then it took me a few days to realize who he was.
Speaking of Star Trek, I've been watching an original Star Trek episode "The Changeling" on Me TV as I've been writing this entry.
OK, that's all for now. I'm heading over to Old Ebbitt Grill and then No. 9 and/or Nellie's. I'm still planning to take a bicycle ride tomorrow.
--Regulus
Posted by Regulus at 10:29 PM