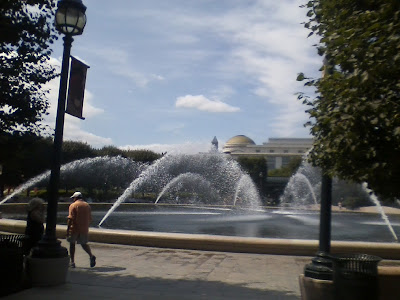 The central fountain of the National Gallery of Art Sculpture Garden, Washington, D.C., 12:47PM September 5, 2013.
This fountain becomes an ice-skating rink in the wintertime (although I'm not exactly sure how it remains frozen given our usual lack of meaningfully cold winter weather given that it is wholly outside). There is Friday evening live "Jazz in the Garden" in the summer months, but it is always too mobbed and usually too flippin' hot, humid, and sunny to wait around for it. 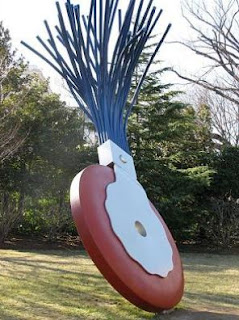 There are some funky sculptures in the garden -- a giant spider; a red, white, and blue old-style typewriter eraser (pictured at left from the Wikipedia page); and assorted abstract geometric designs.

The pictures in this entry were taken on my walk from the dentist's office to work (discussed in more detail below).


This is just an update concerning my ongoing gum abscess and related sinus infection. I talk only about myself in this entry, and if you don't give a damn, that's fine. But then again, I don't suspect you would be reading this entry. (As it is, pretty much everybody except AP was indifferent and never inquired about how I was. Oh, well. Oh, yes, LP returned my phone call, and on Rosh Hashanah no less)
At the moment I write this, I'm feeling a little better now -- after doping up on Advil and Acetaminophen, even though I guess you're not supposed to take them together -- and the swelling has gone down somewhat, but it is still noticeable. It tends to wax in the morning and wane a bit during the day. 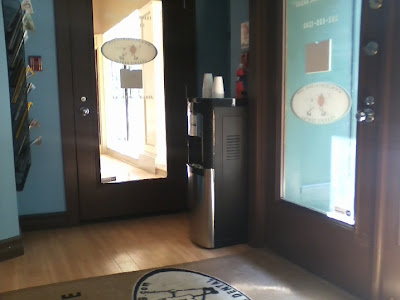 
As for my day, I went to the new dentist (or rather, to his office) today, and it went very well. The time was moved up from 2PM to noon, which was fortuitous, as I was going to go to my previous dentist. The contrast could not have been greater, and I was happy with the staff, treatment, and the office location. Oh, and the cost -- it actually only cost me $15.80, although it will likely be more because I don't think my insurance (Delta Dental) is going to cover the whole thing. 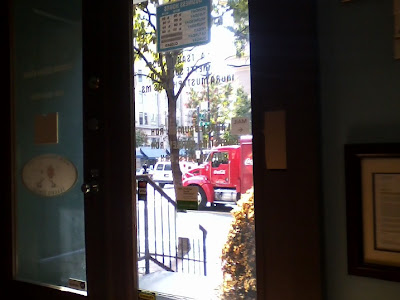 The view through the dentist's glass door of the corner of 7th and D Streets SW, Washington, D.C., 11:53AM September 5, 2013. Ironically, that was a Coca Cola truck at the light.
The office is housed in what must have been an old house / store that has been thoroughly renovated rather than an office building, so you climb exactly one step to enter. It is spacious and pleasant.
*******


The associate dentist called the main dentist (the one I knew main years ago at UMCP) -- he was in the other office today -- and they agreed that I could have a sort of secondary root canal in which drilling could occur in a narrow way through the 2-1/2 year old crown without removing it and correct whatever problem is up there. (It was likely due more to the nature of the roots of the tooth rather than an actual botched root canal back in 2010.) 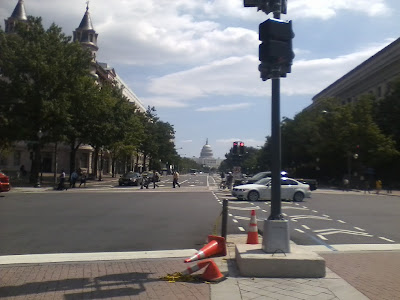 
But I opted not to do that. Instead, I requested and should be able to get the desired extraction of tooth #14 with its irritating / infecting crown. However, I cannot get the extraction until the current infection has gone away. At this point, the extraction is scheduled for the somewhat inauspicious day of September 11th (next Wednesday). The main dentist is going to do the extraction.
I need this tooth and its bad crown and anything else associated with it removed or (if some open passage way) filled. It is an alien presence that is acting as a focus for infections. (The other two crowns are just fine.) 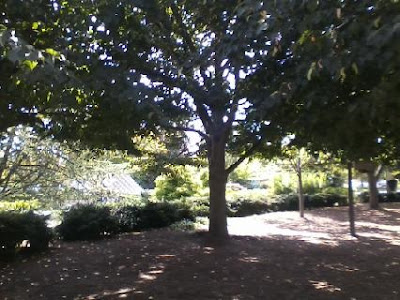 
As for an implant to replace the extracted tooth, those are not done until 3 to 6 months after an extraction (3 months until the post is installed and then another 3 months until the actual implant), which means I could in theory I could do it if I put enough money on my FSA card at the start of the year (an amount that gets deducted over the course of 24 pay periods in the year). 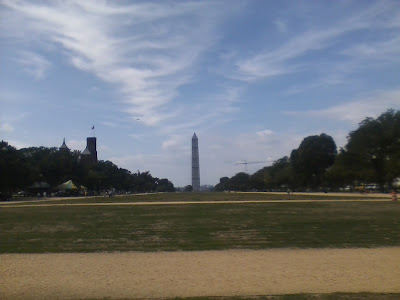 
However, at this point, I'm not quite sure what I will do. Tooth #14 (much like tooth #31 that I lost in a severe abscess back in Feb. 2000) is out-of-sight. And whether it causes disruption to my bite or alignment of my teeth, well, at this point, given that I keep getting infections and noticeable facial swelling, I'll easily take the former.
About the tooth, the X-rays showed an infection (well, I sorta knew I had one) and something not right with its connection to the gum line. Oddly enough, the crown was so well made and so well cemented in place that it is likely to remain there for many years even as other issues / infections take place inside the gum and behind the left cheek. 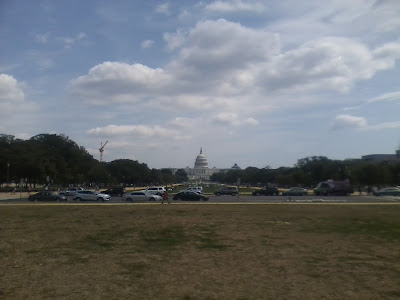 
There is the risk of infection flaring once the tooth is removed -- such as happened so horribly and spectacularly disfiguringly in Feb. 2000 when #31 was removed at a clinic in Hyattsville. However, at that point, I had a severe abscess and that tooth needed to come out. Actually, I probably needed an oral surgeon rather than a bushy-mustachioed dentist to extract teeth from poor people like some early 20th Century shoemaker (I was an uninsured student).
I'm not sure how much the extraction itself will cost but if I had to guess, it will be in the $100 to $200 range. 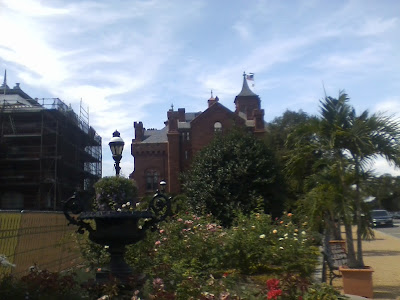 
I came away feeling fairly good about this turn of events. I walked the half mile or so to walk -- on a route from Penn Quarter near the National Archives, across Pennsylvania Avenue and Constitution Avenue, through the Sculpture Garden, transiting the National Mall itself, and via the Haupt Garden and L'Enfant Promenade.
My work day was fine although I didn't make as much progress on a time-sensitive task. I got into work about 1PM. 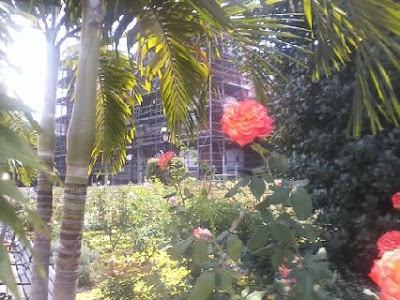 Another view of the trees and shrubs outside the Smithsonian Institution, Washington, D.C., 12:58PM September 5, 2013.
The building under construction is this view is, I think, the Arts and Industry Building.
*******


By about 5PM, I was feeling groggy and almost loopy. I had taken another Acetaminophen but not another hybrid 875mg amoxicillin / clavulanate potassium. I'm only supposed to take two of those per day. (About that, the dentist told me not to take the 500mg amoxicillin I had left AND the hybrid one, since that would be an overdose of antibiotics).
I left work around 630PM. There was no way I could go to the gym tonight (and what's more, I didn't have my gym clothes / accoutrements anyway). (Oh, yes, I was told it probably is a bad idea to go swimming with a sinus infection, or at least dive to the bottom of the deep end.) I took the Metro to McPherson Square, and after wandering around a bit, I stopped at the restaurant Lincoln on Vermont Ave. NW and sat at the bar and had a curious kale salmon salad and "Parker" rolls. I also had a nice conversation with the bartender waiting on me (Aaron). 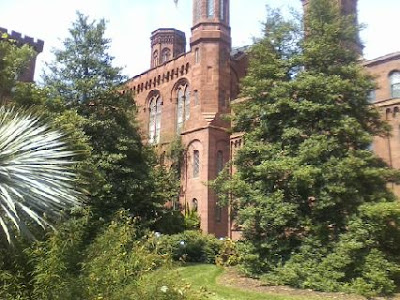 
Thereafter, I walked home. There was no way I could stop at No. 9 or any place to get a drink -- not feeling as I did. I was quickly getting tired and fevered, and by the time I got home, my head was throbbing and I was thought I was dying. But I took more Advil and relaxed, and it sort of passed. But I guess it could come roaring back. And I can't get the procedure until I am healed of this malady.
Now I'm home posting this entry while watching a funny rerun of Married, With Children on Antenna TV ("Peggy and the Pirates"). While Me TV has screwed up the schedule (no more nightly airings of The Odd Couple or The Honeymooners), it still shows Rhoda. 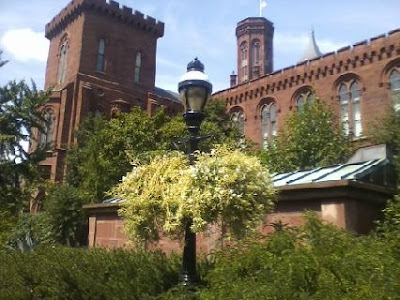 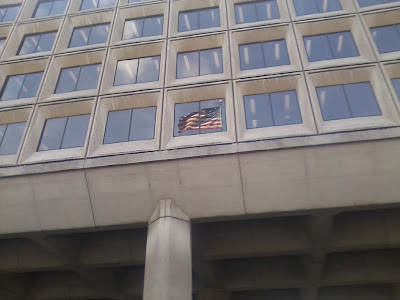 
It has been wall-to-wall dry sunshine of late and high temps in the mid-to-high 80s Fahrenheit and dew points in the 45F to 50F range this Thursday. I wouldn't mind this typical September dry weather except we have had very little rain of late, and the frontal passage last weekend was virtually dry even while New Jersey and eastern Pennsylvania, as well the NYC area got lots of rain / t-storms. And there is no sign of rainfall coming.
Hurricane Season and Hurricane David Anniversary ...
The hurricane season was killed this year -- both the Cape Verde and western Atlantic "seasons" / portions -- owing to so much hot, dry Sahara air and general troughiness off the East Coast killed, respectively. 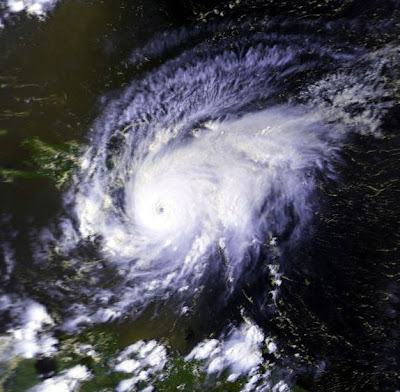 
Speaking of hurricanes, today, September 6, 2013, is the 34 anniversary of Hurricane David "hitting" the mid-Atlantic coast of the U.S. It had actually come ashore / hugged Florida / Georgia coastline between Sept. 3rd and 5th, and by Sept. 6th when it crossed New Jersey's latitude region, the then-tropical storm was actually well inland (the center over West Virginia and western Maryland, heading into central Pennsylvania). This is shown on the map below.
The Jersey shore area still got hit pretty hard (with onshore winds). I note this because I fortuitously returned from a visit to see my mom in Belgium the day before on September 5th, 1979. I was living with my dad and grandparents in Long Branch, N.J., at the time and had gone to Belgium to see her for part of the summer. 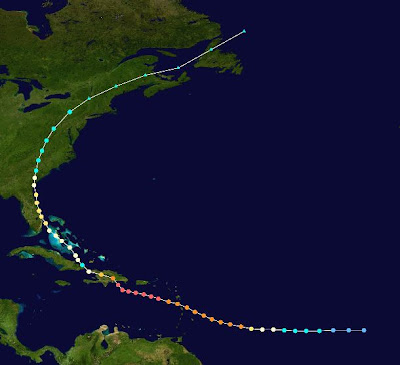 A color-coded track of Hurricane David from tropical depression through category 5 cyclone and back in the period of late August - early September 1979.
*******


OK, that really is all for now. My next planned update will be over the weekend.
--Regulus