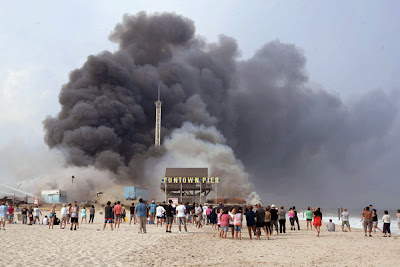 
I post this entry because anything that adversely affects the Jersey shore adversely affects me ...
This entry features some photographs of the devastating fire and its immediate aftermath along the boardwalk (called "the Boardwalk") and Funside Pier in the communities of Seaside Park and Seaside Heights, New Jersey that destroyed numerous businesses, many of which had just rebuilt and reopened in the wake of the devastation of Hurricane Sandy last October. Thankfully, though, no one was killed or seriously injured. 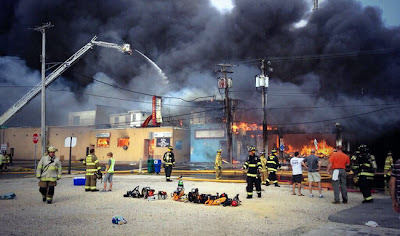 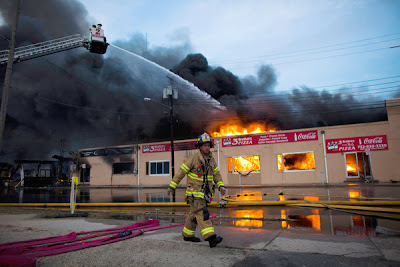 Firefighters from across Ocean County, N.J., battled the fire that raged along the Boardwalk area of Seaside Heights and Seaside Park, N.J., September 12, 2013.
******* 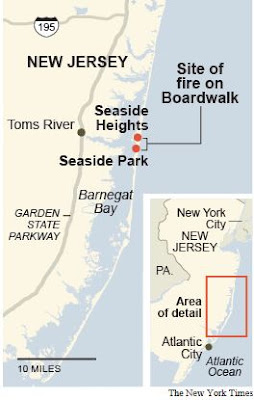 The fire apparently began in Kohr's Frozen Custard ice cream shop and quickly engulfed businesses along what is called "the Boardwalk" and the Funtown Pier area located in Seaside Park and Seaside Heights on the famed Jersey shore (which, as my more devoted readers know is whence I hark, though about 35 miles north of there in Long Branch).

Above: A map of the Jersey shore showing the locations of Seaside Park and Seaside Heights where the Boardwalk fire occurred. 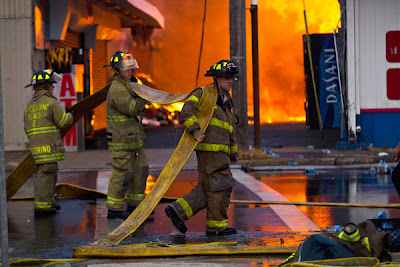 
The billowing smoke was visible for miles as bystanders stood by watching the blaze and firefighters do battle with it. Firefighters -- at least 400 in all from around Ocean County -- battled the conflagration.
According to The New York Times article: "The fire burned for about five hours, and was finally contained shortly before 8 p.m. It drew about 400 firefighters from more than 30 towns in Ocean County, who removed strips of newly built boardwalk and pumped water from Barnegat Bay. By evening, they had dug a 50-foot trench in the sand, hoping to stop the fire from moving farther north."
In all, at least 20 businesses were totally destroyed in a six-block stretch. 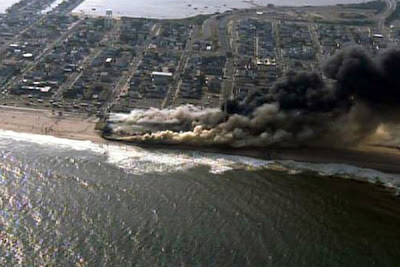 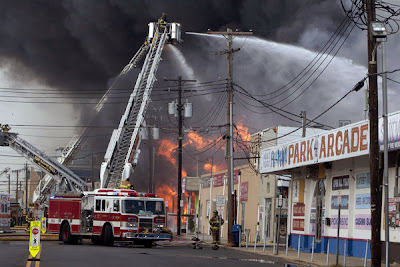 Fire trucks use water from Barnegat Bay to douse the sprawling fire in Seaside Park and Seaside Heights, N.J., September 12, 2013.
*******


The worst injuries appeared to be firefighters who had to be treated for smoke inhalation. The Boardwalk in Seaside Park had reopened starting in May and in some cases stores had yet to do so in the wake of the devastation from Hurricane Sandy's storm surge. 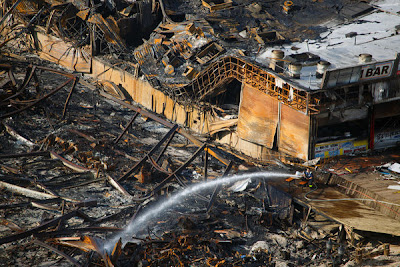 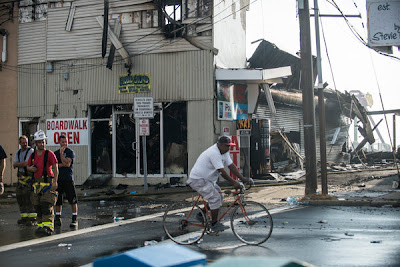 A bicyclist rides past the burned out wreckage of the Boardwalk and Funside Pier in Seaside Park and Seaside Heights, N.J., September 13, 2013.
*******


Gov. Chris Christie was quickly on the scene lending his verbal and political support but refusing to speculate on the cause of the fire. (It appears he was there both last night and again today.) 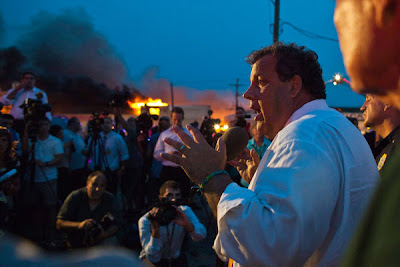 
Standing in front of emergency vehicles in Seaside Heights, he called the blaze "unthinkable." When he heard the news, the governor said, "I said to my staff, 'I feel like I want to throw up.' "I can only imagine," he added, "how the residents and business owners in this town are feeling."
Later, as reported in The WaHoPo, Gov. Christie said: "I will not permit all the work we’ve done over the last 10 months to be diminished or destroyed by what happened last night ... While we have lost a place that has provided generations of memories to our citizens, we will rebuild. We will make new memories, because that's what we do."
The article states he said this while standing across the street from a still-smoldering pizza shop and a gutted arcade building that he used to patronize with his family. 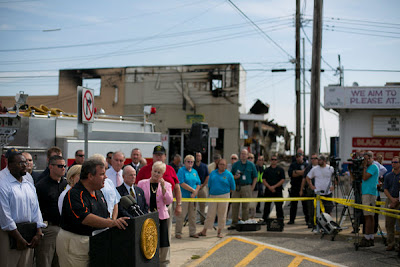 
The pugnacious, bombastic, and sometimes hard-right Gov. Christie (appropriately) won high praise -- and saw his statewide popularity skyrocket -- for his handling of the aftermath of Hurricane Sandy, even as his public embrace (rhetorical, political, and literal) of President Obama just before the election earned him the undying hate of the neo-Confederate Teabagger GOP right, in particular in its always ginned-up, for-profit media / entertainment machine, which is problematic given that he wants the Republican presidential nomination. 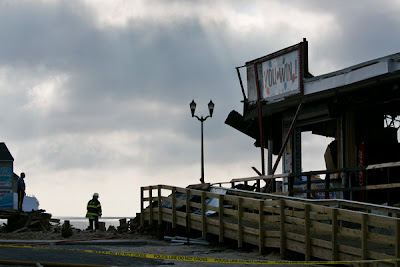 A firefighter surveys the wreckage from the conflagration that destroyed so many businesses in Seaside Park and Seaside Heights, N.J., the morning after the blaze, September 13, 2013.
******* 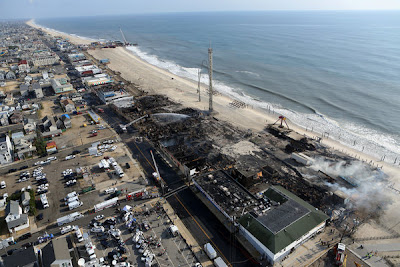 
As for New Jersey, it's my view that you have to be from there (or really otherwise "get it") to understand the almost spiritual connotation of what it means to many New Jerseyans when they hear the term "the Jersey Shore" ... As a wonderful ad that has occasionally appeared on Yahoo mail since May puts it: 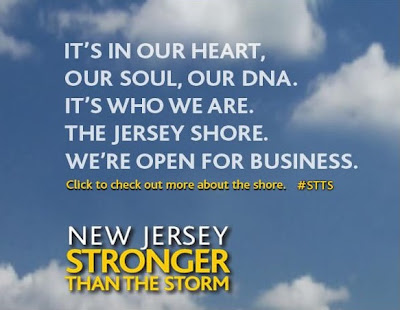 And unless and until the Atlantic Ocean overwhelms it someday (decades, centuries, or millennia hence), the Jersey shore will survive. 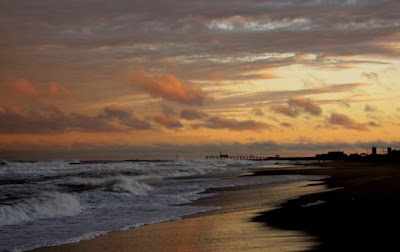 The Atlantic Ocean crashing surf at Bradley Beach, N.J., following the rain as seen at what looks like dusk.
*******


Speaking of the Jersey Shore, I will try to post my Wildwood Crest / Wildwood all-too-brief vacation pictures over the weekend.
--Regulus
Posted by Regulus at 9:39 PM