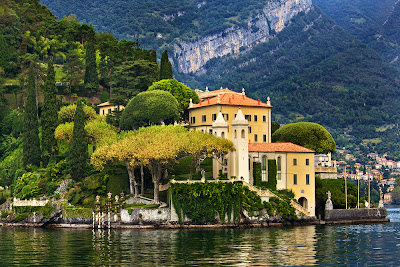 The famous Villa del Balbianello in the Comune di Lenno on Lake (Perry?) Como in the Italian Alps of northern Italy. (No, this isn't the villa I reference below in the entry ...)
*******


This entry turned into a longer one than I anticipated. I only have a handful of disjointed images that are mostly meant to break up the text.
For starters, I shall refrain from any discussion of the ongoing GOP manufactured crisis in Washington over the budget and the debt limit except to say we continue to careen toward a Federal Government shutdown on Tuesday of unspecified duration even while the much scarier possibility looms of a debt limit breach, a wholly unnecessary event that potentially could be so cataclysmic I simply don't see how it can be allowed to happen. Obama would have to assume emergency powers. It simply can't happen. 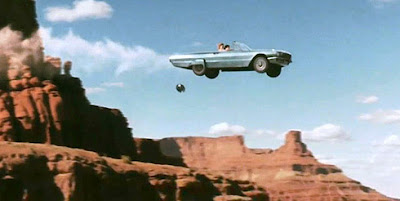 This is a suitable image for the situation we face. (This image is also useful for entries about "HG" but that's not a topic in this one.)
*******


But we are also at a point where this situation has morphed into a possible Constitutional crisis as a cohort of neo-Confederate Republican radicals are threatening to alter the balance of power between the executive and legislative branch by using outright extortion tactics -- threatening to blow up the world, as it were -- if they don't get their way in the form of President Obama surrendering on his signature health care law achievement. But Obama simply cannot do that -- even if it means a debt limit breach. 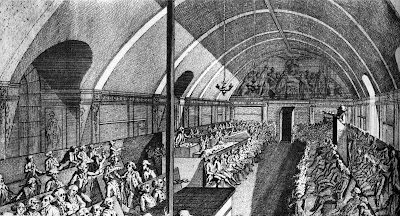 These loony neo-Confederate Jacobins are facilitated and fueled by the rightwing media / entertainment complex and enabled by what is (as former Pres. Clinton described on Piers Morgan's show this past week) one party rule in severely gerrymandered districts even as this group is in a demographic death spiral.
I imagine that The WaHoPo editorial board and the Washington Consensus Central courtiers -- with their inability to recognize good versus depravity and their obsession with "process" and (to quote Paul Krugman) "Views Differ on Shape of Earth" false equivalency journalism -- can still find the "subtle nuance" of the GOP position and urge "a bipartisan approach" to make the world safe for corporate oligarchy and Wall Street crooks. 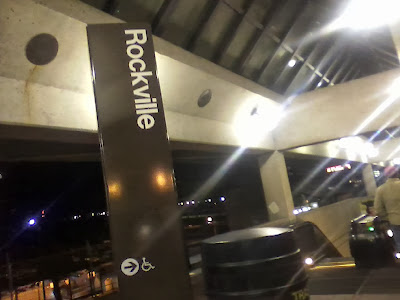 
At this point, it may be the case that the agency for which I work as a Federal contractor (through a private company) may in fact remain partially open. In addition, my company would continue to operate for the time being. I have initiated a preliminary step to taking out a 401k loan if necessary if I were furloughed (since my company could not keep me on for an extended period solely on overhead).
Updated 425PM 9/29/2013: Actually, this may overstate the case concerning how much of the agency would operate. It may just be a tiny part of it. As it is, I estimate that after 1 to 2 weeks of shutdown, I would be furloughed.
*******
I'm home right now in my dimly lit, air-conditioned wee little efficiency. I just made dinner -- enough for two portions -- in the form of two bags worth of that Tyson grilled steak strips, an onion, and some mushrooms along with two bags of boiled rice and steamed broccoli, carrots, and cauliflower. Everything got mixed into the big pan at the end.
It came out quite tasty.


At this precise moment, I am listening to the RCN channel 891 music choice easy listening channel -- John Gregory's rendition of My Cherie Amour. But it's time to switch over to Me TV and watch the "Sci-Fi Saturday Night" line-up on MeTV of Lost in Space, the original Star Trek, and the Svengoolie-hosted monster movie. I think tonight's movie is The Leech Woman.
I had a strenuous gym workout over at my YMCA National Capital after a three-day hiatus including a 5.5 mile / 778 calorie / almost 1 hour jog climbing the equivalent of 1,042 feet; about 50 minutes of weight-lifting; and about a 25 minute swim. My weight was actually a whisker under 145 pounds on the big scale in the locker room, a new low since I rejoined the gym 15 months ago. Now yesterday at my doctor's appt., I weighed 150 pound on that scale, though I had some clothes on. 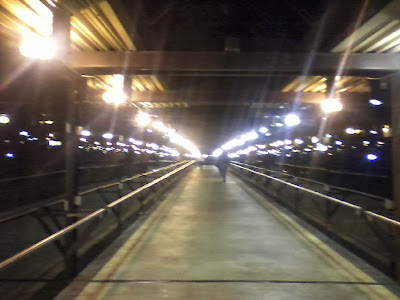 The pedestrian bridge over Rockville Pike between the Rockville Metro and the courthouse / town square area, 10:24PM September 27, 2013.
*******


We continue to be in a completely dry and shitty pattern with temps in the 70s F for highs forecasted to rise into the lower 80s F by midweek. There is no flippin' sign of rain anywhere in the foreseeable forecast future (at least 7 days out). We are quickly entering drought conditions. 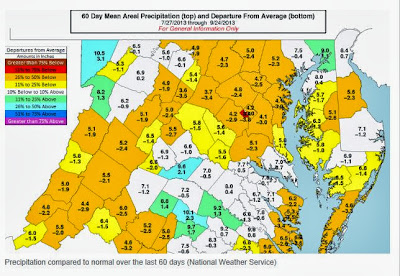 
I'm sure the CWG weather weenies are thrilled over this as is the Palka-Cabra Creature and Drool Hill. There has actually been an east northeasterly flow the past few days with periods of cloudiness as the oceanic air mass banks up against the Blue Ridge, but there has been no rain, no mist, no fog.
There is a low off the East Coast but it should remain well offshore and keep us in a dry subsidence zone. In short, there isn't the slightest chance it would approach the coast. 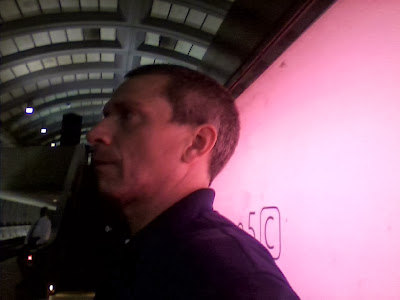 
I'm not really sure what to do tonight. I spent way too much money last night as part of that trek up to Rockville even while having in the end a crummy time. I headed up to Rockville from Friendship Heights after my evening doctor's appt. in Chevy Chase and an hour stop at Chad's (formerly Chadwicks's). While there sitting at the bar, I had some dinner and drinks and a really good conversation with a real estate agent named Gene who by the end was insisting that I am two or three friends take him up on his offer to stay at his villa in Italy near Lucca. 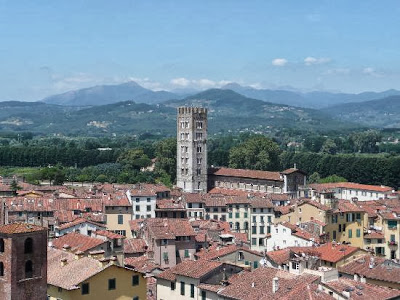 
As for the doctor's appt., I was given a prescription for Sumatriptan Succinate (that is, Imitrex). The filled prescription included only four but up to four refills.
OK, that's all for now. I intend to post a Saturday night musical interlude entry.
--Regulus
Posted by Regulus at 9:55 PM