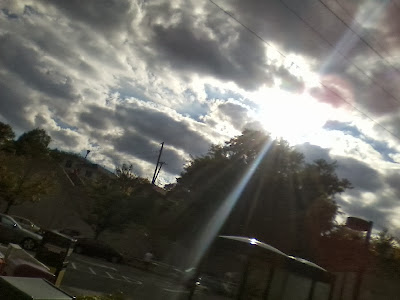 The Sun shines through a mottled stratocumulus cloud deck as seen from the East Falls Church Metro, Arlington, Va., 4:46PM September 22, 2013.
I tried to get the picture at 4:44PM EDT exactly -- the precise moment of the Northern Hemisphere autumnal equinox / arrival of astronomical fall -- but the train arrival / station exit in a flood of people didn't work out.
*******


This is a quick Monday morning update as I have to get to work shortly. It is the first full day of fall -- which arrived yesterday at 4:44PM EDT -- and the weather is pleasantly cool (highs forecasted to be around 70F today) with partly cloudy skies. No rain is forecasted all week -- the Saturday rain I discussed here was it for the time being, but at least we had about 1" area-wide.
Yesterday (Sunday), I took an approximately 20 mile bike ride yesterday -- mostly on the Virginia side -- that went very well until the very end back in D.C. when I hit the curb too fast at 16th and K Street (owing to how a vehicle was turning) and immediately suffered a front tire puncture. There are one of two bike shops where I can take the bicycle for a repair but probably not until Wednesday (when I get paid -- I'm nearly flat broke until then). 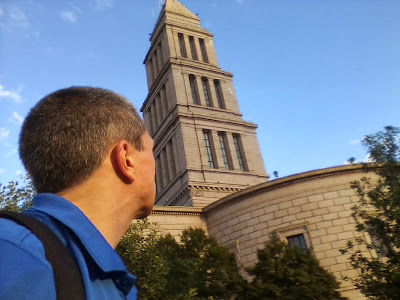 Yours truly by the George Washington Masonic National Memorial in Alexandria, Va., 6:12PM September 22, 2013. In all my years in this area, I had never actually gone up to the thing. I approached it from King Street -- walking my bike up a grassy embankment, at one point pulling it up a steep incline.
*******


The bike ride was from East Falls Church Metro where the above picture was taken, down the Four Mile Run and then Washington & Old Dominion (W&OD) trail to Shirlington and into Alexandria eventually to Old Town, where I had very nice dinner at Virtue, and then in the increasingly early darkness of late September at night back into D.C. on the Mount Vernon trail.
I took about 20 pics, about a dozen of which I would like to post tonight after I get home from the gym (after work). Of course, I've made so many promises to post entries that I never do on this blog that I don't want to say for sure I will. As I've mentioned, the time I need to post an entry is highly problematic. 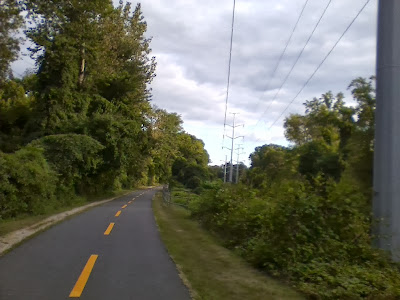 
I too my blood pressure reading this morning -- it was somewhat elevated at 136 / 84 with pulse at 73. I've had as low as 128 / 83 with pulse 72 in the past week but this morning's number seems a typical one. I'm supposed to have a follow-up visit to the doctor on Friday evening to discuss this. 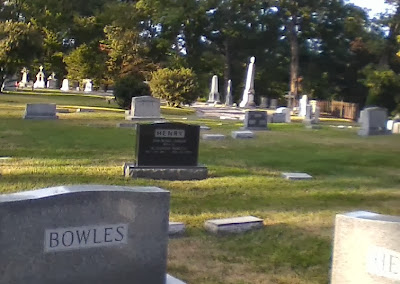 
Oh, yes, I'm sure this week in the news and commentary is going to be all about impending Federal Gov't shutdowns and/or defaults. How much of it is just GOP theatre and how much is real is unclear -- there certainly are GOP crazies of a very special neo-Confederate sort this day. I mention this because a shutdown would quickly and adversely affect me, and I'm wondering about a 401k loan, which I need to consider. I realize I may be overreacting on this, though.
Again, I'll try to update the blog tonight.