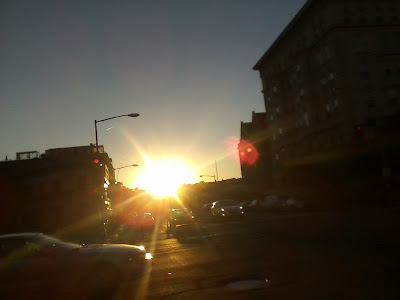 
OK, this may actually be the first of a few entries that I post today. I have just returned from my doctor's appointment as part of my effort to heal my dental / gum infection. It went well and I am on a new antibiotic (clindamycin). I talk about in my follow-up entry. The rest of this entry was written late last night and this morning, though some of the images were taken around Friendship Heights / Chevy Chase today.
From earlier ... 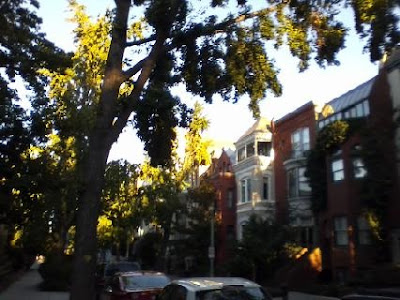 Gentle, pleasant evening in the 1700 block of Corcoran Street NW, Washington, D.C., 6:42PM September 6, 2013.
A few points: (1) We need rain; (2) Those are the female Ginkgo trees with their disgustingly stinky late summer / fall "fruit" that falls and is squashed everywhere; and (3) Corcoran Street runs between Q and R Street. Oh, and (4) I was walking to the Safeway grocery store.
*******


I started this entry shortly after I got home around 150AM last night when I was in terrible pain and an even worse mood -- the gum infection that morphed into a simultaneous sinus infection hurting like hell, esp. just under my left eye. In the end, though, I took my 875mg of amoxicillin and clavulanate potassium tablets, a 40mg acetaminophen, and (though I know you're really not supposed to mix them) four Advil. (I am thinking of just taking the 500mg amoxicillin four times a day instead rather than the 875mg hybrid twice a day since I still have some left over from a month ago, then go back to the hybrid.)

The antibiotics have been helping keep the infection under control -- and resulting facial swelling / disfigurement on the left side from being more than just slight, but I need a stronger one.

Additionally, I am in a bad situation here in that tooth #14, first maxillary molar, with its infernal crown and whatever else is acting as a focus for these repeated gum infections / periodontal abscesses and now persistent sinus infection needs to be extracted as soon as possible, but I cannot have it done until the infection is gone.


That is because if it is removed now, it would likely cause a massive inflammation / eruption and I would be as disfigured as I was in the horrible, nearly fatal episode in February 2000 (see below). This creates a kind of Catch-22 for me since it is the bad crown that is contributing to the repeated infections. 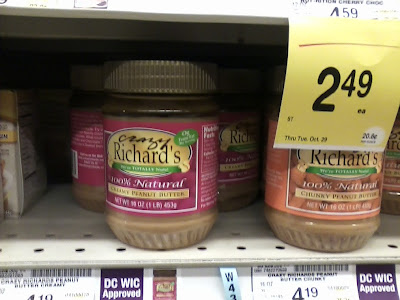 
My dental appt. with the new dentist is scheduled for Wednesday morning (Sept. 11th!). I requested and was told I could get just an outright extraction. I don't want even to try to save this goddamn crown or nub of a tooth underneath it. I may go for a costly implant next year but I don't have to worry about that right now. As it is, you cannot see this tooth (it's in the back), #14 in the standard numbering system, also called the first maxillary molar. 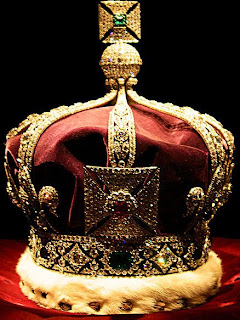 The crowning was done by a competent but highly flaky and money-grubbing dentist back in 2002 or 2003. Another dentist (who did one or two of my other crowns from that time) did the root canal / re-crowning in 2010, or rather, his oral surgeon did it, but that did not seem to work well. Plus his office operation is too shady and slightly scary. Hence, I changed dentists.


I fear what may happen (as in February 2000): Massive inflammation / disfigurement and days off from work. Of course, I had no insurance back then and was a truly poor graduate student (in a worthless journalism program, masters degree #2 of what would ultimately be three masters degrees) living on student loans (let's not get into that bit of American greatness*).
*Higher education in America has so followed that remarked-upon special American arc from "(reform) movement to (for profit but legitimate) business to (scamming) racket." But as long as crappy little Wall-P has made money and sucked up to Power, then everything is fine in its godless, pointless Cosmos.

"Eh. Eh. Ehehehe. Money is the means by which humans properly evaluate worth, and therefore, we conclude that the more money one has, the greater the ability one has to add shareholder value -"

I am supposed to see my medical doctor (or rather one of the ones at the MedStar facility in Chevy Chase) at 3PM today. This is sort of a follow-up to my Tuesday appt., which occurred the evening before this latest gum infection flare up when I thought it was just a sinus infection and another doctor at the facility gave me the current prescriptions.

As ever, I had to argue the point with the medical side (the person making the appointment for today) that this in fact is a medical issue as much as a dental. Medical doctors and their systems make this big, arbitrary, annoying, and (if you're poor / lack financial resources or insurance) potentially fatal distinction between "medical" and "dental."


In the end, I managed to debate the point that because the prescription came from the doctor and the sinus symptoms are what they are, I need a follow-up visit rather than "just going to my dentist."
Part of the reason I was in such pain is that I ate a (nice) dinner and chewed on that side of my mouth. Obviously, I cannot live this way. Specifically, I went to Old Ebbitt Grill tonight, where I had the Maine lobster, salad, bread, two glasses of white wine, and coffee. Thereafter, I went to No. 9, although bartenders from two other bars (including Cobalt) were there in a sort of gay sorority-boy pack with their attendant horribleness for a night out.
As for my friends, most of them are fairly vapid and depressing: Narcissists who couldn't even be Job's Comforters because they are far too self-absorbed for that. This is the essence of urban gay men, both Gen X'ers and (especially) Gen Y'ers.
Well, I probably wouldn't be much better, either. 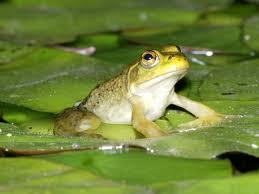 As for the straights, most of the men got married to women who turned them into neutered, clueless, buccal-pumping frogs sitting astride their suburban lily pads, thinking they're masters of their wee domain.


Meanwhile, their "concerned" neurotic, manipulative, and all-controlling women are busy obsessing over their sticky, poopy, insufferable children they plopped out 5 to 10 years ago even while watching OPRAH! and the flippin' local news carnival sideshow. And while the men obsess on money and sports, these soul-draining, cheesecake-eating, mall-shopping women fret about bogus threats, in particular, s3+u@l pr3d3t0rs and Amber Alerts in every suburban Drug-Free School Zone. (There is much titillation in this hysteria, their neighborhood internet chat rooms and "community discussion boards" just light up when that crap is the topic.) 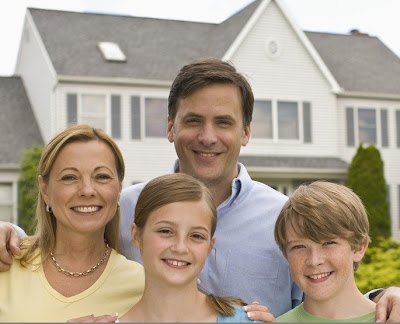 In some cases, though, the men instead are really married to Money & Power while technically in a child-free and generally pointless marriage (except that that is what you are supposed to do in that reality), children replaced by dogs (see Wall-P above). I refer to the self-congratulatory and self-righteous sort that think they are high powered, high-octane Masters of the Universe, convinced of their own greatness and genius, though in realty they are little more than Tools of Empire & Oligarchy. You find this in D.C. a lot, esp. those that try to stay "cool" by living in the District instead of moo'in' on out to the suburbs. . 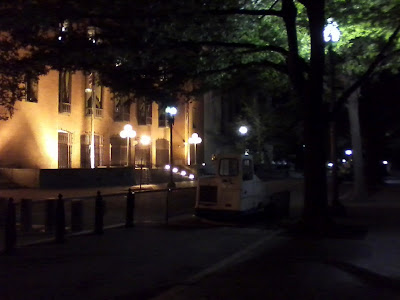 Lafayette Park near the White House at night, Washington, D.C., 10:25PM September 6, 2013.
Actually, this is Madison Place on the east side of Lafayette Park -- not to be confused with nearby Madison Drive (which is the old "A Street" north of the National Mall, nor Madison Street (the three-syllable "M" Street east of Rock Creek Park).
*******


At this point, I would like to post the content of a text message that my co-worker and friend DD sent me on Thursday. The context is he is talking about how gay men are treated by straight society even in our much more socially tolerant (and simultaneously economically brutal) age. And as background, DD lives in Rockville and has as wife and two young children. 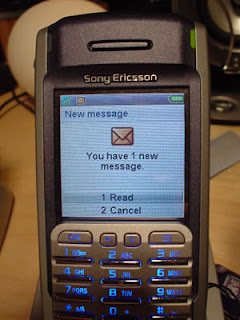 "It's my bystander’s insight into part of why society finds it easy to reject gay people: The prescribed chain of events is that eventually people marry and have kids, and communities function around that. Parents' worlds contract, and those excluded from marriage become invisible."


To DD's point, I wanted to note that the Class of 1988 of my "Alma Mater" --Glen Burnie High School (GBHS) -- in flippin' Glen Burnie, Maryland** had a low-rent version of its 25th reunion last month in which no more than 25 percent of the total class population showed up (and it was likely significantly lower than that since it is unlikely every "found" classmate (62 of 310 listed) showed up). 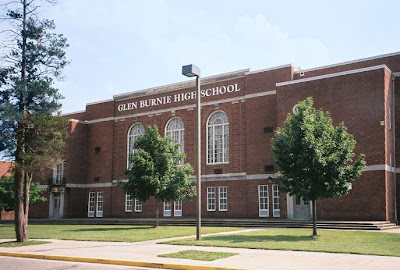 In looking at the website, such as it is/was, for the already-happened event, no more than consisted mainly of married women with children (many likely on marriage #2). These are the ones who remained in Glen Burnie where they got pregnant and had between 1 and 3 children. As for the men who showed up, there really isn't much to say. I'm sure it's the usual divorce / child support / second marriage / kind of thing.
Also, just look at how big the page is of those classmates that the organizer(s) could not find. I'm happy to report that Yours Truly is among the list of 248 people that the organizer(s) could not find. I guess the complexities, nay, HOLY MYSTERY of using Google to find someone eluded the organizer(s). 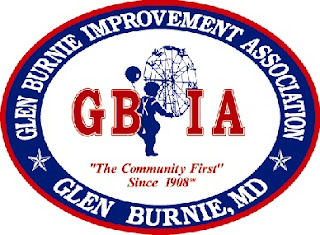 I'd like to repeat what I wrote in this entry concerning what a high school friend, Luther, once said ... and HOW I WISH I knew what the set up to it was) at the Glen Burnie Improvement Association (GBIA) Carnival circa 2000 -- years after high school and where I used to work in the large food shed area a handful of times during the two weekend run of the annual event with him and a couple other high school friends I've since lost touch with ... in the style of that 1970s Calgon water softener commercial: 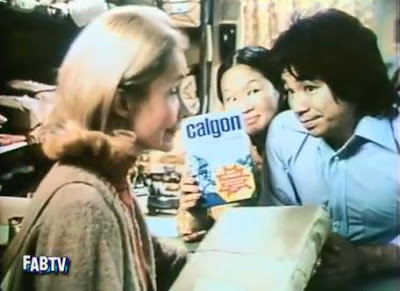 "ANCIENT G.B.I.A. SECRET, EH?"
OK, in the commercial, the customer actually says, "Ancient Chinese secret, huh?" but Luther said "eh" (at least as I recall). And Calgon -- apparently a portmanteau of "calcium gone" -- as advertised here is a water softener to be used with laundry detergent rather than a detergent itself. 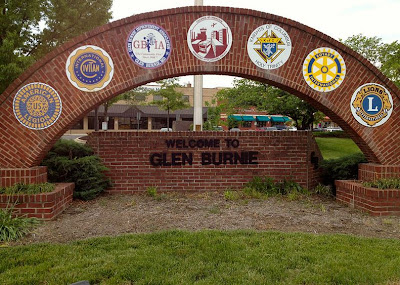 **Glen Burnie: A Census-Designated Place in Anny Runnell Kenny, Merlin, where the Military / Industrial / Surveillance Complex and its sky-trillion dollar Permanent War Machine never need fear a subversive idea to undermine it ... And where the American Razzle-Dazzle Infotainment Machine can sell anything all day long while everyone remains securely in one of the reality-hermetically sealed information bubbles it offers.
OK, that's all for now. The pain is again flaring and I really have to get this taken care of. If anything is going to kill me before my time, it is going to be one of these goddamn abscesses.
--Regulus
Posted by Regulus at 10:21 PM