"Everything is not up-to-date in Kansas City (or at least in my 9-year old road atlas) ..." 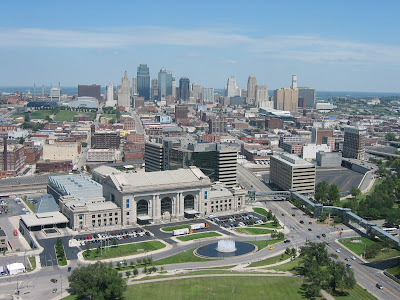 View of Union Station and downtown Kansas City, Missouri. This undated photo was taken from the Liberty Memorial by Wikipedia user Jrballe.
*******


(See bottom of this entry for a very brief update about my day, night, and impending dental procedure.)
Here is a WHOLLY RANDOM topic that I wanted to post. The basis of it is that I like to look at road atlases (especially while, oh, never mind). 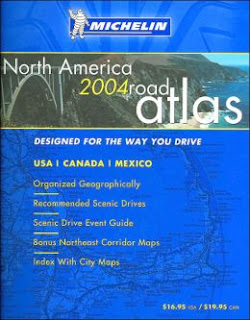 The road atlas in question in Michelin's North America 2004 Road Atlas, which I came into possession about two years ago because someone left it downstairs in the lobby in the area where people leave things if they don't want it (often books and magazines). (Here is the link to buy the 2013 version.)


The location in question is Kansas City (KC), both Missouri (MO) and Kansas (KS), where I have never been and really have no particular desire to visit. (To be clear, the two are distinct cities in separate states.) 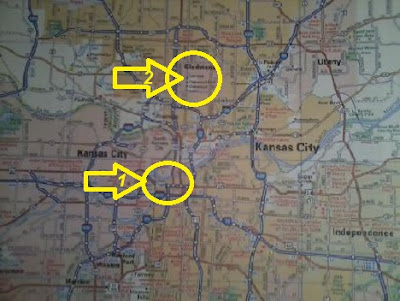 Above is a blurry cell phone image picture of the page in question with two marked spots. The first (given by the noted yellow circle labeled "1") features (not visible in this picture) a sliver of KC, MO on the Kansas side. This is based on the map color of the incorporated KC, MO, as well as its relation to State Line Road (south of this spot). 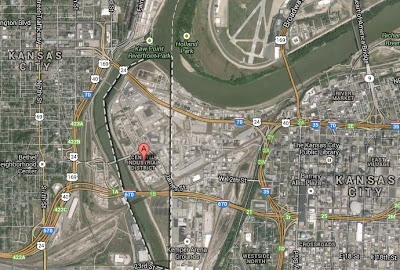 The area in question turns out to be the "Central Industrial District" west of the MO/KS boundary (north of State Line Road) but east of the Kansas River and south of Kaw Point where the Kansas River empties into the Missouri River, as seen on the above Google aerial map image. 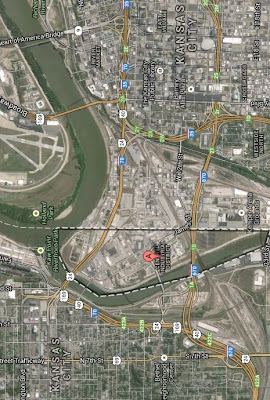 Here is the same Google aerial map as above, except rotated so that north is to the left and "up" is east. It has more or less the same orientation as the picture directly below (except that is at an angle rather than a straight-down God's Eye view). It looks as though this area is clearly part of Kansas City, KS, not Kansas City, MO.


Indeed, addresses on Ohio Avenue in the district appear in fact to be in Kansas City, KS.
Thus, the atlas is probably just wrongly shaded. (There is another area a bit south of there that has the same problem.) 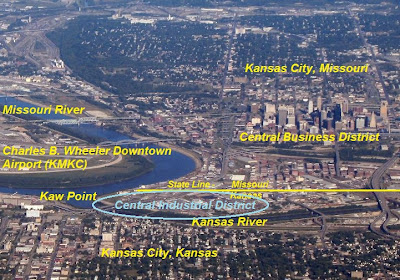 Above: A labeled aerial view of the Central Industrial District (circled) of Kansas City, KS as well as the MO/KS state line and downtown Kansas City, MO just beyond it, as well as the Charles B. Wheeler Downtown Airport (KMKC). The confluence of the Kansas River with the Missouri River is also visible at Kaw Point.
*******


The second area (given by the noted yellow circle labeled "2") features what appears to be a small "island" about 1 mile long and 1/2 mile wide consisting of four tiny distinct towns on running due north-south along Rt. 283 that are wholly surrounded by but not part of KC, MO.
I refer to specks along Rt. 283 called Oaks, Oakwood, Oakwood Park, and Oakview.

Are they independent cities? Is it some kind of crazy right-wing / Let Freedom Ring and the Eagle Soar Like She's Never Soared Before thing that explains their "island" independence ... the kind of places with "libertarian" city governments that will let your house burn down if you failed to pay the annual contract fee?? OK, probably not, but you never know. 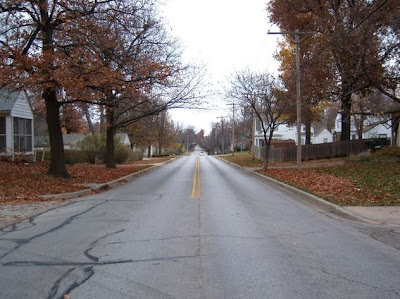 Oh, yes, here is an image of State Line Road I found online looking due north. Kansas City, MO is on the right side and Prairie Village, KS is on the left side (this is a suburb of Kansas City, KS on the south side of it).
Speaking of KC suburbs: West of KC is Lawrence, Kansas, where the 1983 movie The Day After was set (and you see nuclear bomb detonations annihilate KC); and closer in to KC on the southeast side is a place called Raytown. 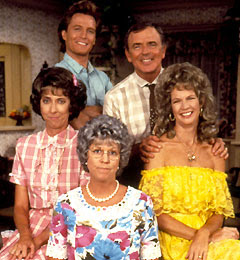 Now "Raytown" is also the fictitious town here the 1980s TV sitcom Mama's Family was set. The state where it was located was never specified, though it was referred to at least once as "the Jewel of the Tri-State Area". So it couldn't be Raytown, MO.

However, the Mama's Family wiki site has apparently decided that is where it was set.
But when the show began as the dark "The Family" skit on The Carol Burnett Show, it was clear "Raytown" was in the American Deep South.
*******


Well, I was going to update this blog with a longer entry, but the night slipped away from me after having left work late, gone to the gym late, and then got home around 11PM, and then having cooked dinner and watching my late night TV sitcoms (presently, The Golden Girls on Hallmark).
My dental procedure is still scheduled for tomorrow at 10AM, and I am a bit apprehensive, but I really want it out of the way since this crowned tooth (back molar) is just far too much trouble (it's irritated even now though the abscess has mostly gone away thanks to the clindamycin). I'm just not sure what to expect with the extraction, though I hope it in fact happens tomorrow and there is no delay. I'll post again tomorrow.
--Regulus
Posted by Regulus at 2:08 AM