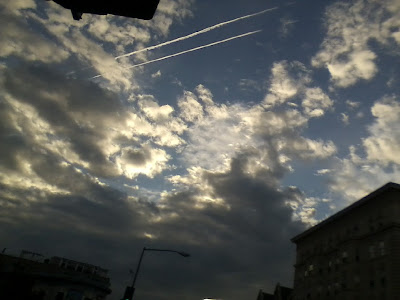 The evening sky mottled with stratocumulus and altostratus clouds and fragments of two parallel condensation trails as seen from the intersection of 16th and U Streets and New Hampshire Avenue NW, Washington, D.C., 7:03PM August 9, 2013.
I walked home from work tonight.


The weather was rather hot and humid today with temps reaching into the lower 90s Fahrenheit -- a comparative rarity this year, especially compared to the hellishness of the past three summers.

However, except for that week-long stretch, there has been a real paucity of 90F+ weather this summer in Washington, D.C., which is JUST FINE with me. Of note, today's daily record was 102F set in 1930 (a pre-KDCA record).

There were t-storms in the area but we're back to a "normal" state of affairs whereby everything has been missing D.C. proper and, OF COURSE, that stupid rain gauge at KDCA.


As for the other two regional airport climate stations, KBWI reached 90F and had 0.01" of rain as a t-storm complex just missed it. KIAD reached 89F with no measurable rainfall. 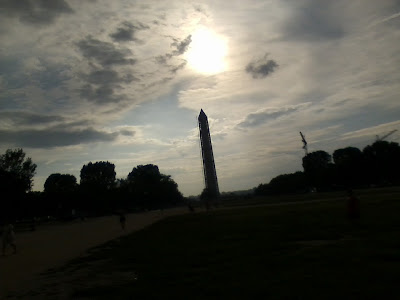 The scaffolding-covered Washington Monument silhouetted on an early evening summer sky fleeced with cirrus and cirrostratus clouds (from nearby thunderstorms), Washington, D.C., 6:10PM August 9, 2013.
Yes, this is one of my familiar crummy quality cellphone camera images.

However, at this point, we are still a full 3" above normal at KDCA, a whisker below at KBWI, and a touch above at KIAD as follows: 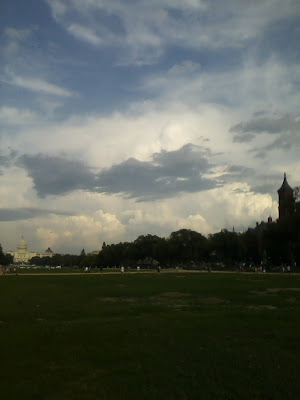 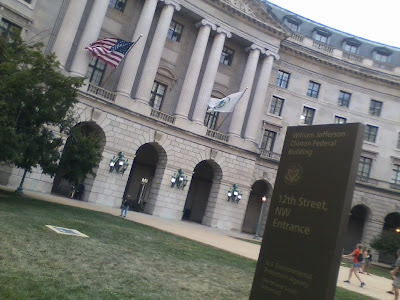 This is EPA headquarters along 12th Street between Constitution Avenue and Pennsylvania Avenue. Until recently, this giant, ornate office building (it's quite lovely inside with curved corridors, stately spiral staircases, startling large and intricate wall murals, and giant wooden paneled doors) from the 1930s was known as the Ariel Rios Building. I know this because I had a statistics class in there back in 2006. 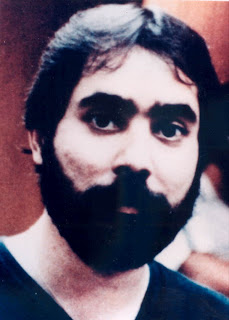 The building had been named since 1985 for Ariel Rios (pictured at left), a 28-year old ATF agent killed in the line of duty back in 1982. The building back then housed AFT headquarters, and later EPA. But as of July 17th, 2013, following, yes, an Act of Congress, it is now the William Jefferson Clinton Federal Office Building.

The late Mr. Rios -- pictured above in an image from a Florida State Archives web page -- instead gets a nearby fountain named after him.


I'm not going to post an further update this Friday evening since I sort of want to go out. I plan just to shamble about, D.C. gay-bar style, to my usual places (Larry's Lounge, No. 9, and/or Nellie's, and maybe I'll slum it at Windows). I am skipping gym tonight (see previous entry).
Rather, for the rest of this entry, I am simply going to post a Michael Lind piece that appeared on Salon.com yesterday (yes, I went back to running the computer malw@r3 risk associated with reading that damn site). The piece is on how conservative intellectuals (including William F. Buckley) once viewed Ayn Rand and her cult gibberish compared to today's brain dead right-wingers.
Of note, I don't have many pictures to accompany this piece but that will just have to do. I may update it with some pictures tomorrow to break up the text.


Michael Lind is the author of Land of Promise: An Economic History of the United States and co-founder of the New America Foundation. More Michael Lind.

OK, that's all for now. I intend to update the blog tomorrow.