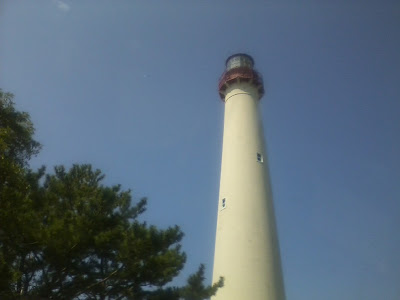 The Cape May Lighthouse near the southernmost geographical point* in the State of New Jersey, 11:58AM August 27, 2013.
*The actual geographical southernmost point in New Jersey seems to be located nearby at Sunset Beach at 2nd and Beach Avenues; it is on the same latitude, I estimate, as Irving Street NW in Washington, D.C.
As for the Cape May light itself, you can see it flashing from Rehoboth Beach about 20 miles away. You can also see at least two transmitter towers, a particularly tall one that is located in Cape May.
*******


I am back home from my seashore trip to Wildwood, New Jersey via Rehoboth Beach, Delaware with Gary, Larry, and Wendy. I actually got home around 515PM but I haven't had time to post an entry. I intend to post an entry -- or more likely, two or three entries -- in the next few days that contain some of the 75 or so distinct pictures I took and sent to myself. 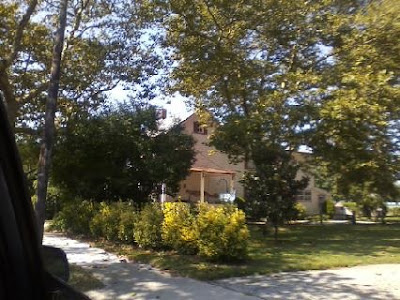 
As for this evening, I made it to the gym and had a decent workout. This was my first gym visit since the near collapse / pass out I had last Wednesday while on the treadmill and despite the fact that I still feel "funny" in what may be a sinus infection (and hopefully nothing worse). While I went on the treadmill, I only spent 15 minutes on it and jogged about 1.2 miles. Instead, I spent 50 minutes on the elliptical trainer before doing some weight-lifting and 16 (back-and-forth) laps in the pool totaling 1/2 mile. I managed to do all that without any serious problems. 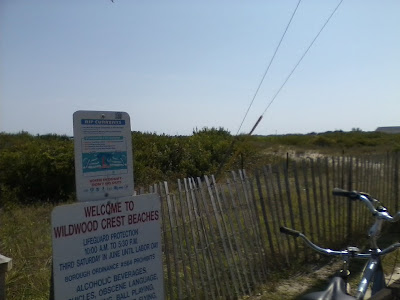 
Tonight I had a nearly hour long phone conversation with my dad that started spectacularly badly -- including a hang up -- but that actually was quite important. The issue is that he as a 72 year old man is basically fearful of this crazy woman half his age that he is living with who has regular violent outbursts of alcohol-and-mania-fueled fury.
I now the names of his landlord and the local Flagler County DA involved in a previous incident and I am considering when to call (he asked me to wait until after Sept. 15th to time it with a planned move to a trailer north of Flagler Beach in an even more isolated and unappealing stretch of the Florida coastline around Beverly Beach. 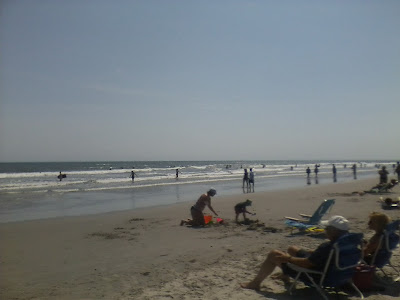 
The weather was hot and scuzzy in the D.C./Baltimore area today with temps reach 94F at KDCA and 92F at KBWI with dew points around 70F and crummy / hazy air quality (as it tends to be this time of year), as we obvious as we drove down I-95 through Maryland. It was far nicer over on the Jersey shore in Cape May County.
So I return to work tomorrow, although I am actually going to be working from home. 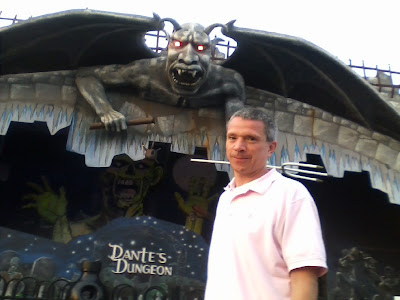 Yours truly beside the Dante's Dungeon ride on Surfside Pier, one of the three major piers that comprise the Morey's Piers, Wildwood, N.J., 7:03PM August 26, 2013.
I had ridden FLY! -- The Great Nor'easter roller coaster with Gary and Wendy about an hour earlier, and then had a rum drink at the Soggy Dollar Beach Bar at the end of the pier, and so I was feeling a bit headachy and woozy.
*******


OK, that's all for now. Again, I intend to update the blog with the photographs that I took.
--Regulus
Posted by Regulus at 1:36 AM