The Watergate, the Potomac, and the Rest of the City of Washington Beneath the Cloud-Fleeced Summer Blue Abyss 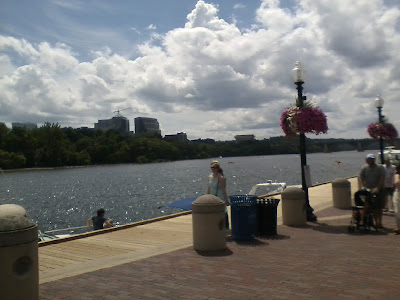 The Washington Harbour in Georgetown with a (yes) sparkling Potomac River beneath a cumulus cloud-fleeced warm summer sky, Washington, D.C., 3:15PM July 7, 2013.
Beyond the forested swath of Theodore Roosevelt Island are visible the towers of Rosslyn in Arlington, Va., including the nearly completed 1812 N. Moore Street Building, now the tallest in that strange Potemkin village of a "city."
*******


As I discussed in this entry, I'm still rather worried about whatever may have happened late Thursday / early Friday. I keep expecting something horrible to happen, although ChrisT told me that I would remember if a trauma of some sort had occurred. 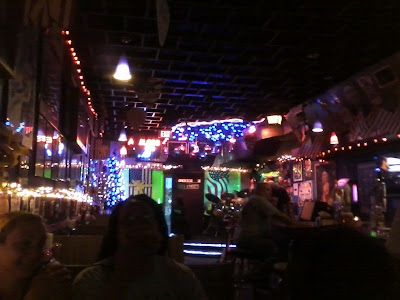 
Oddly enough, the rest of my extended July 4th holiday weekend was quite pleasant. As a follow-up to my previous entry, last (Saturday) night, I went with Andrea, Imara, Jake, and Matt to a little suburban Virginia hole-in-the-wall / quasi-Southern bar called JV's Restaurant (also called JV Restaurant) located at (lucky number) 6666 Arlington Boulevard in the City of Falls Church. 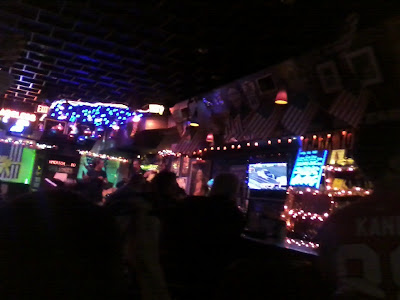 
Curiously, JV's Restaurant is located in a small suburban strip mall -- where it has been located since it first opened back in 1947. I say curiously since I did not think that strip malls really existed back in the mid-1940s. It is also presently located behind a Goodwill shop.
Speaking of that Goodwill shop ... 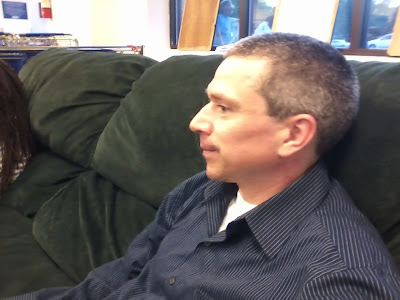 
As for the founding date of 1947, I find that thought so bizarre, especially considering what the place must have been like for many years of its history (i.e., a real hardcore smokey redneck / biker bar). I can't believe that the place already existed for at least a full year when my mom was born in late 1948.
The motto of JV's Restaurant is "Ageless Charm Without Yuppie Bastardization" (although I think "Postmodern Bastardization" would more accurately capture the desired sentiment, unless the place is simply making an economic class argument, which I sort of doubt).
*******


Editor's note: Nearly all the pictures that follow below were taken on Sunday, July 7th. However, they are posted somewhat out of order of the blog entry narrative. 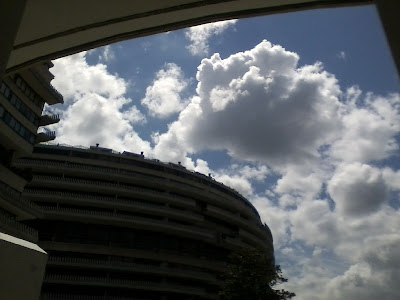 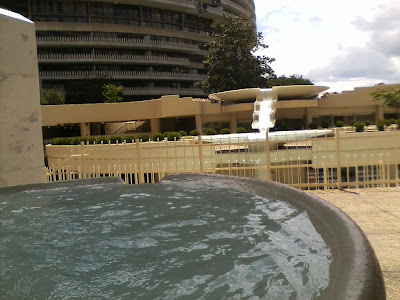 
As it is, I get quite lost in the suburban and exurban purgatory of Northern Virginia once beyond Arlington.
There was a $5 cover charge to see the band we saw. The band played a medley of songs from the 1960s - 1990s for a full 4-1/2 hours with just a couple breaks. We actually left before they finished. 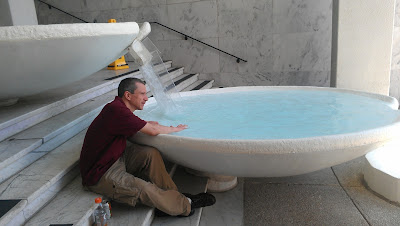 Yours truly at beside one of the fountains in the Watergate Complex, Washington, D.C., around 245PM July 7, 2013.
This is the first of three pictures of me at the fountain. Yes, I realize it is somewhat narcissistic of me to post so many pics of myself, but Wendy took two and I took one that I wanted to post.
*******


By the way, I don't think fondly of Matthew Henry much anymore, but I couldn't help but do so while driving there (in the back of Andrea's whale of a 1984 Mercedes Benz TD300 station wagon with its many hundreds of thousands of miles under its wings tires on such a delightful and gorgeous summer evening -- everything so leafy green and bathed in the golden orange light of the setting Sun. This included driving in the direction of Annandale (where I believe he once lived) and then going to JV's (though I doubt he has ever been there). 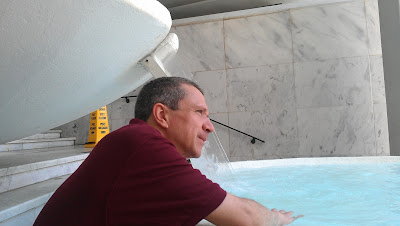 Second picture of me beside one of the big flattened ovaloid basins of the terraced fountains in / under the Watergate Complex, Washington, D.C., approx. 2:45PM July 7, 2013.
*******


We left around midnight and went back to Jake and Matt's place for a little bit before Andrea, Imara, and I headed back into D.C. (there was room in the back for both me and the bicycle with its odd handle bars). I got home around 2AM and went to bed by 330AM. 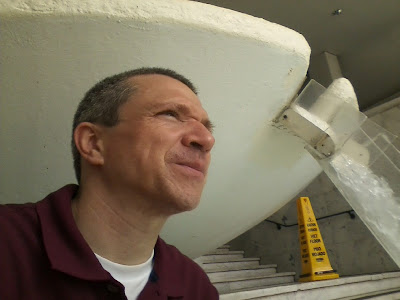 
As for today, after sleeping until about 1PM, I got up, got ready, and met Wendy at 2PM. We took a walk down to the Watergate and over to Georgetown where we had lunch at Chadwick's before doubling back to Dupont Circle. I then went briefly to Nellie's, where I only had some water, and then to No. 9 and Larry's Lounge before returning home. I didn't have much to drink at either place -- two drinks and one. 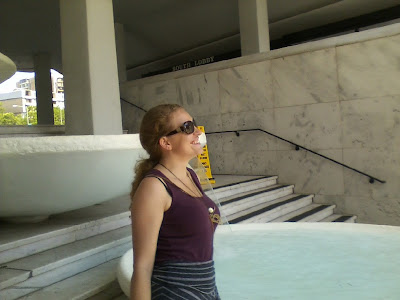 
As you can probably tell now from all the above pictures, Wendy and I sat beside the 1960s Jetsons-like outdoor terraced fountains at the Watergate East, specifically, one of the flattened cement ovaloid terraced basins with their falling waters sluiced by plastic spillways.
The weather was just stunning: A delightful southerly breeze carrying in pure, clean maritime tropical (mT) air and big, puffy cumulus congestus clouds below cirrus tufts and wisps, all in a warm Sun-bedazzled cerulean sky. To that end, this picture is very appropriate ... 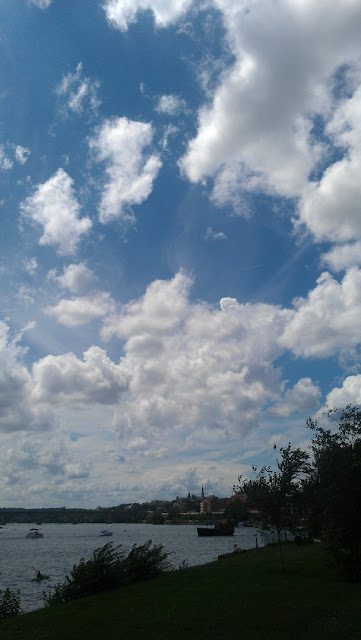 Wendy took this picture this past Sunday (July 7th, 2013) down by the Potomac River waterfront along the bike path. Georgetown and Theodore Roosevelt Island are visible in this entry as is the vaulted blue sky with arrayed with summer cumulus and cirrus clouds. It just nicely captures the vastness of the blue sky.
The above picture for me calls to mind a wonderful paragraph in Arthur C. Clarke's Imperial Earth when Duncan Mackenzie -- newly arrived from his home on Saturn's moon of Titan to a quasi-utopian Earth for (a benign) America's quincentennial (July 4th, 2276) and his own cloning -- stands beneath a blue sky in Washington, D.C. 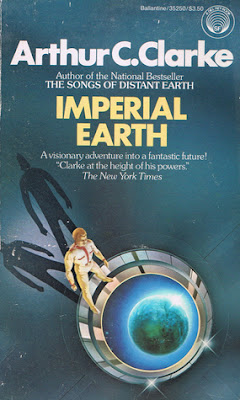 "He had flown halfway across the Solar System, yet never had he received such an impression of space and distance as he did now, when he stared at the solid-looking white clouds, sailing through a blue abyss that seemed to go on forever. It was useless to tell himself that they were only ten kilometers away -- the distance a spaceship could travel in a fraction of a second. Not even the starfields of the Milky Way had yielded such glimpses of infinity."


By early evening, a weak line of showers and thunderstorms marched across the area, but in the end it was more ominous skies and an outflow boundary / gust-front than heavy weather / much rainfall. We had a brief heavy downpour around 8PM. It looks as though KDCA had 0.04" while KBWI had 0.10" plus 0.01" later and KIAD had 0.08" of precip. Temps reached the lower 90s including 92F at KDCA, 91F at KBWI, and 90F at KIAD. This summer continues to be far milder than the past three with none of the infernal prolonged heat and humidity. 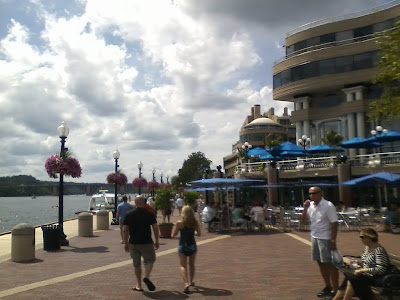 
As a follow-up to my June 28th, 2013 entry about the dramatic drop in hits to my blog as recorded by StatCounter, the numbers have fallen even further -- stabilizing around 80 page loads in the past week. I fairly sure that what happened in the past 10 days is that StatCounter finally stopped counting all those Google image hits coming from specific Microsoft servers. 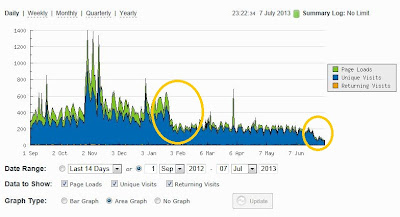 StatCounter area graph chart hits (i.e., page loads, unique visits, and returning visits) for my Regulus blog from Sept. 1, 2012 through July 7, 2013 with the periods of the two main drops circled.
The first major drop off occurred back in January when Google instituted the new image search function that allowed for image previews on its servers rather than having to actually click on the link. Combined, these two changes have resulted in the 80 to 90 percent drop in daily page loads to my blog, as well as the large drops in unique visits, first time visits, and (to a lesser extent) returning visits.
******* 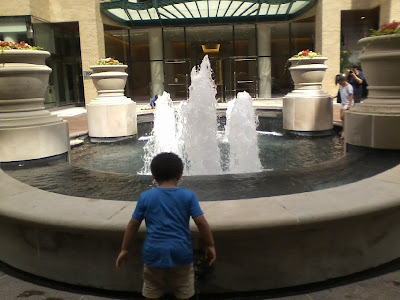 A small child playing in one of the smaller fountains at the Washington Harbour area, Washington, D.C., 3:18PM July 7, 2013.
Of note, the main fountain has been wholly altered -- much shallower and the bottom painted dark rather than appearing as a big, inviting turquoise pool. I'm sure that was done intentionally.
******* 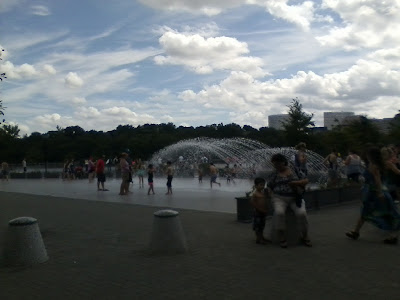 People (mostly children) playing in one of those run-through-in fountains featuring jets of water that shoot up through holes in a tiled or cement paver area, this one in a the Washington Harbour area, Washington, D.C., 3:21PM July 7, 2013.
******* 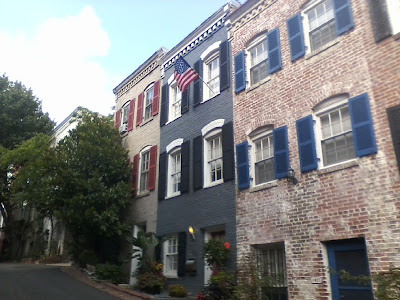 
I'm home now just watching reruns of The Golden Girls on TV Land. They're on Hallmark a bit later. I need to be in bed by 130AM.
Quote from The Golden Girls episode "Take Him, He's Mine" (1986):
Dorothy: "I won't be seeing Geoffrey any more. He's leaving town." 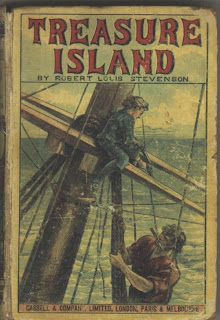 Rose Nylund: "I knew it! The minute I heard you were dating a sailor, I said to myself there'll be nothing but heartaches. Those swabbies drift into port, park their diddies on your doorstep, show you some tricks they learned in the Orient, and then it's, 'Avast me hearties,' and they shove off with a serpent tattoo and your heart as souvenirs!"


Dorothy: "You've been reading Treasure Island again ..."
(Note: Some versions of this have Rose saying "squabbies" but I think it's "swabbies" since that means "sailors.")
*******

Here are a few more pictures I took this Sunday ... 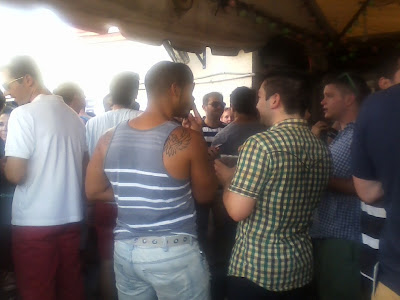 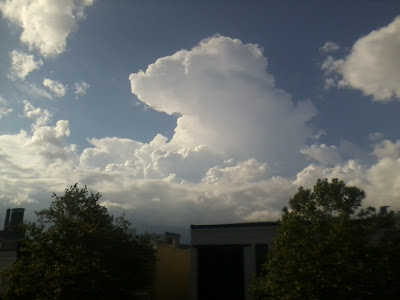 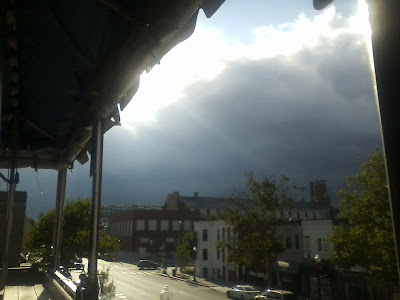 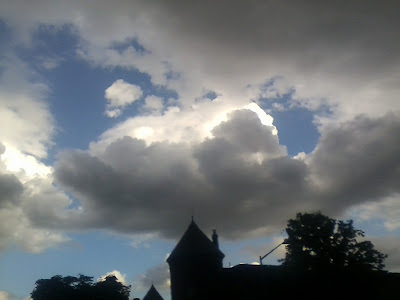 Silhouetted buildings including a turret on a sky with storm clouds approaching (from the opposite direction), Vermont Avenue and T Street NW Washington, D.C., 6:12PM July 7, 2013.
******* 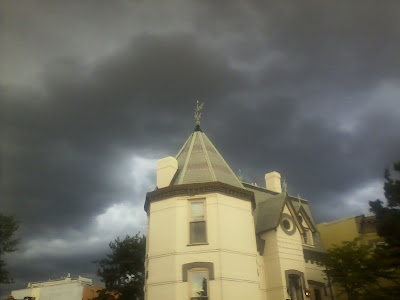 The house at 1801 Vermont Avenue NW Washington, D.C., 6:14PM July 7, 2013.
This is Paul Kelsey Williams' old house. He lived in the 1990s and I spent a few nights there as well as a Thanksgiving (in 1999). Paul and this house was once featured in a Washington Post magazine article. Paul is a local D.C. historian who has written a number of books and articles on aspects of D.C. history and runs a house history firm (I even assisted him on a few case studies). But I think he lives in Baltimore now.
*******


OK, that's all for now. I intend to update this blog either Tuesday or Wednesday night (provided my aforementioned fears aren't realized).
--Regulus
Posted by Regulus at 1:47 AM