The Magic Garden: Recalling an"inadvertently psychedelic" children's show from way back when

(OK, let's see if I can get this entry posted given reason cited in my previous entry.) 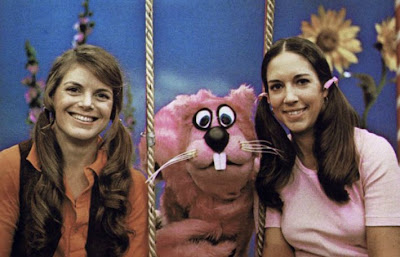 Paula Janis, left, and Carole Demas, left, and Paula Janis, right, in The Magic Garden circa 1972 along with a large puppet squirrel (I think his name was Sherlock) that frequently appeared in the show.
(This is the image that appears on their website; The New York Times article on the show has an inverted version of it. Both website and article are linked below.)
*******


If you grew up in the New York City metropolitan area *between 1972 and 1984 (as I did in Long Branch, New Jersey), you probably knew of the children's television show called The Magic Garden.

The show aired on WPIX channel 11 (the station whose long-running "circle 11" logo used to be an image sort of suggesting the old Twin Towers of the World Trade Center, except its creation pre-dated their completion by 4 years).


*By this I mean within the range of the over-the-air TV stations, especially in the time before cable. 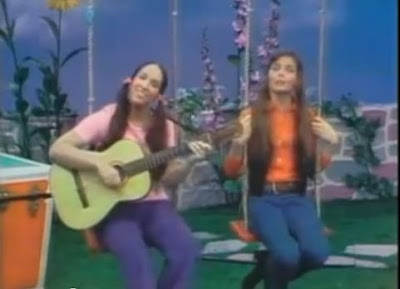 
The show featured two young hippie-like women -- Paula Janis and Carole Demas -- who would spend time in a "magic garden" singing and laughing while telling stories meant to teach little life lessons for young children. There was a cast of characters -- usually puppets, though sometimes other humans, and a bunch of flowers that would intermittently burst into hysterical giggles when they had a message to give. These flowers were "the Chuckle Patch." Yes, there was something more than a little psychedelic about those giggling flowers. And the two sat on oversized toad stools. 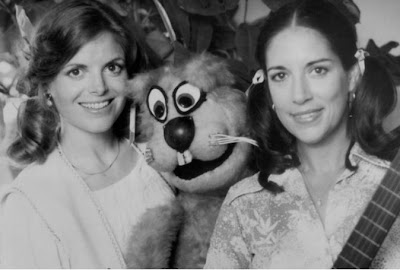 A black and white picture of Carole Demas and Paula Janis from back in the early 1970s.
Paula looks so much like a former friend of mine (she of the Hippograms blog) who kinda turned on me and it went rather badly.
******* 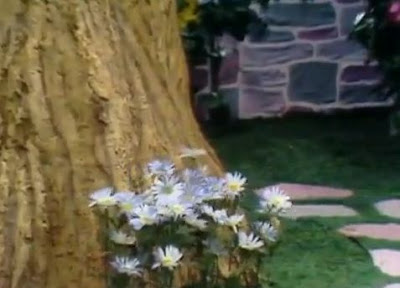 
My own favorite aspect of the show is the opening song and accompanying "video":
"The Magic Garden" Theme Song (also possibly called "The Garden of Make Believe")
I've had this song stuck in my head at times over the years.
If you listen to the full version on the duo's website (see link below), it is longer and sounds distinctly like an Irish folk song, or maybe it's just blending into another one.
The article notes the following about the duo:
"Ms. Demas and Ms. Janis were born and raised in Brooklyn and crossed paths many times on their own roads to adulthood: as students at Midwood High School; at the graduate school of New York University, where they studied early childhood education; and, in 1962-63, as teachers at Public School 7, an experimental elementary school in Brooklyn Heights made up largely of minority students from low-income backgrounds."
The article also states that many of the original props were burned in a fire at Ms. Janis' home in the 1990s (date unspecified). BOO.
Of note, there were 52 episodes made in the period 1972 - 1984. 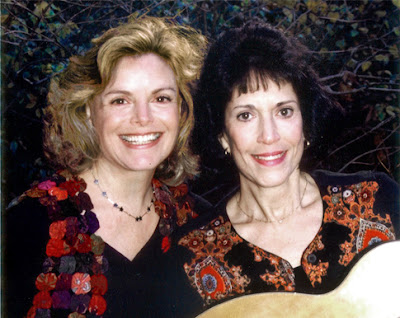 
The duo (now 72 or 73 years old) still tour together and do a variety of songs including from The Magic Garden. This current show and its website are both called "Carole and Paula - Friends Forever", and it includes info and pictures from The Magic Garden as well.
*******


WPIX also used to have an the news team of the late Pat Harper, Bill Jorgensen, and Steve Bosh (among others). The weatherman at one time was Roberto Tirado, whom my dad once said angrily while watching him, "THIS GUY IS THE HORSE'S ASS!" Not sure whatever happened to him. I remember he always had a kind of goofy smile and giggled his way through the on-air weather segment. 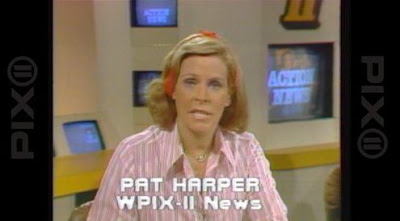 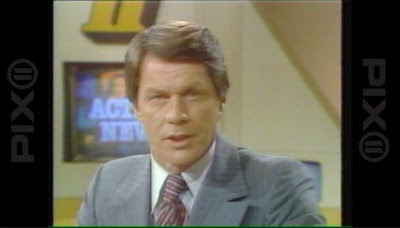 There he is: Steve Bosh. He looked (and acted) kinda like a parody of an overly serious news anchor from the early 1980s. I wonder whatever happened to him.
The news always ended with an editorial by the late Richard N. Hughes, the station's VP of news operations, whose famous tag line was: "What's your opinion? We'd like to know." Oh, and on that note, Bill O'Reilly got his start there.
*******


OK, I was going to write more tonight -- about my (busy) work day and after work gym workout (jogging, a little weight-lifting, and swimming), plus some other humorous and/or unlikely stuff, but I kinda ran out of time. I'm probably not bringing the computer home tomorrow night, so my next update likely will not be until Wednesday night (or early Thursday morning).
--Regulus
Posted by Regulus at 2:17 AM