More Dental and Paternal Parental Woes -OR- Got Any Dandy Denham's Dentifrice? 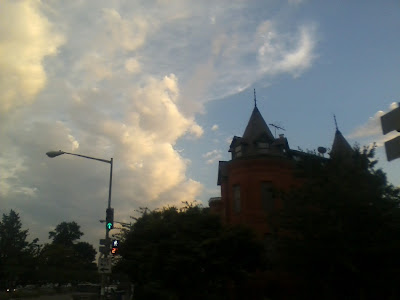 Picturesque clouds in the sky over Washington, D.C., as seen from Vermont Avenue and T Street NW, Washington, D.C., 7:58PM July 28, 2013. This summer has been unusually pleasant and (mostly) without the hellish heat and humidity.
*******


OK, I'm kind of upset tonight. It's clear that my dental issue is not resolving itself -- even though at this point the swelling is basically gone (if only because of the antibiotics) -- and I'm going to have to go back to my dentist this week. Tooth #14 with its slightly over sized crown feels "funny" and my gum above it is again tender and sore. I'm almost at a point that I just want the crown on #14 gone. It has just caused me too much trouble over the years. I'm expecting this thing to start to swell again.
Maybe there is some deep down abscess in my left cheek. 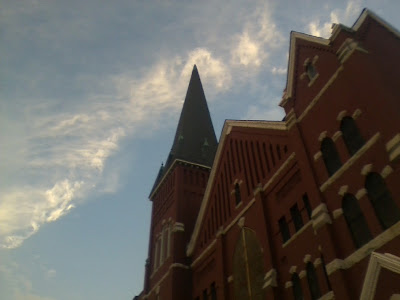 
I nixed the $1,700 gum treatment I was supposed to get next month but I told my dentist's office that it could keep the $293 credit I should have (the first payment installment) since I was going to need to come by again.
I'm so flippin' sick of dental problems. If anything is going to kill me before my allotted time, it's going to be a dental issue that flares uncontrollably. Maybe I'll die soon.
Yes, I'm in a flippin' bad mood right now, so I don't think I'm going to post much of an entry now.
As for dental issues, this scene from the late, great Ray Bradbury's Fahrenheit 451 involving the fictitious "dentifrice" (toothpaste) Denham's has been in my head and seems appropriate, as do the pictures. 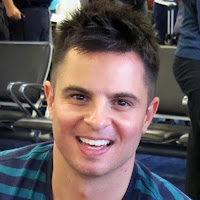 Shut up, thought Montag. Consider the lilies of the field. 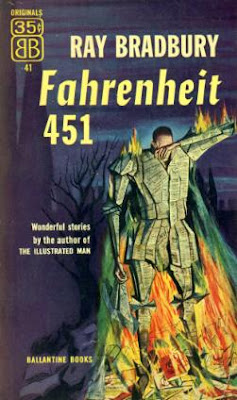 Consider the lilies of the field, shut up, shut up.

He tore the book open and flicked the pages and felt of them as if he were blind, he picked at the shape of the individual letters, not blinking.

They toil not, neither do they -

A fierce whisper of hot sand through empty sieve. 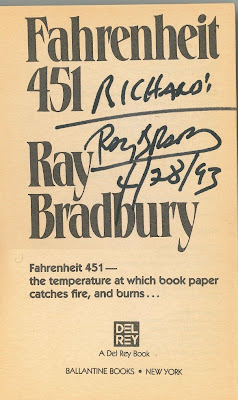 
The train door whistled open. Montag stood. The door gasped, started shut. Only then did he leap past the other passengers, screaming in his mind, plunging through the slicing door only in time. He ran on the white tiles up through the tunnels, ignoring the escalators, because he wanted to feel his feet move, arms swing, lungs clench, unclench, feel his through go raw with air. A voice drifted after him, "Denham's, Denham's, Denham's," the train hissed like a snake. The train vanished in its hole.
Thank you and with apologies, Mr. Bradbury, for the excerpt. (Yes, that's an image of my autographed copy of Fahrenheit 451 from April 28, 1993.)
*******


Saturday night's Eye-talian dinner with Quill was awful because I picked a place (Pines of Florence) that I have in the past very much liked but do not intend to go to anymore ... It's a wreck inside and it just sucked. However, I liked seeing Quill. Next time, I'll have a better choice in mind.
After we parted, I went to No. 9 and then met LP at 1905, where we sat on the darkened rooftop bar / deck in the "soft city" cloudy darkness looking at the nice view, and as an end the night, we went to Nellie's. 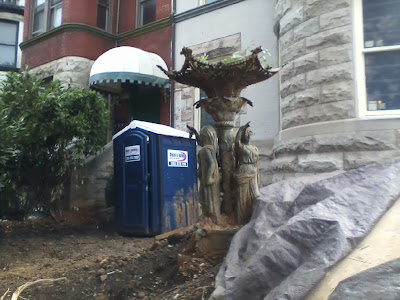 
I had a good gym workout on Sunday but tonight's (Monday's) was worthless. I didn't even go in the pool. I'm not going to go tomorrow. I may go to the weekly Tuesday night happy hour event through Andrea's group. Tomorrow night it is at Barcode, where there is half priced bottles of wine. 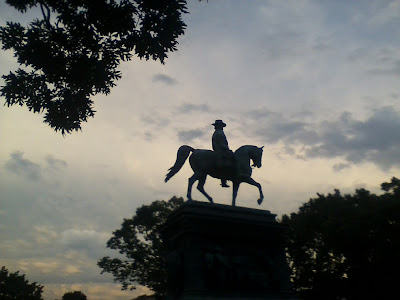 The equestrian statue of Major General and Sen. John A. Logan at the center of Logan Circle, Washington, D.C., silhouetted on the sky, 8:10PM July 28, 2013. There were thunderstorms well to the southeast and the setting Sun was creating subtle colors on the high clouds.
*******


Oh, yes, I had a nice conversation with my mom on the phone, though she is still quite sick from whatever that Chinese malady her boss picked up over there on a trip and brought back to the office. As for my dad, what started out a good conversation ended up typically sh!tty. For starters, that woman Shannon he lives with (one of her mug shots is here) started squawking like a severely hoarse-voiced-from-chain-smoking, rabid chicken (is there such a thing?) in the background. Next, he proceeded to tell me how his new life goal is to buy a double-wide trailer in The (flippin') Hammocks north of Flagler Beach where (he said proudly) "A1A is a half mile from the beach."
Phew.


As it is, he is demanding and trying to guilt me into going down there, but I can't as long as that woman and her 14 year old daughter are around. That is a Flagler County Sheriff Officer's wet dream to walk in on some howling mess (she seems to rough him up occasionally when she has her bad spells, most recently throwing into a sliding glass door, whereupon she was arrested and charged with aggravated battery on a senior citizen ; (he's 72 and she's half his age), except he didn't want to pursue it and then proceeded to bail her out anyway) and arrest a 43 year old lib'rul Socialist gay guy from Washington, D.C., on a Nancy Grace "I Guarantee" Dream-Fantasy List of trumped up and lurid but (in America in 2013) immediately convictable charges. That's not going to happen. 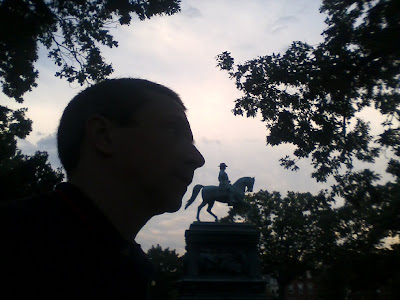 
OK, that's all for now. I may not update this blog until Wednesday or Thursday.
--Regulus
Posted by Regulus at 1:57 AM