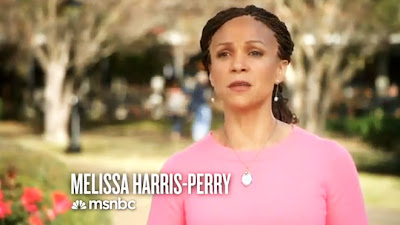 I intend to post my Saturday night musical-themed entry shortly. However, first I want to note this ... 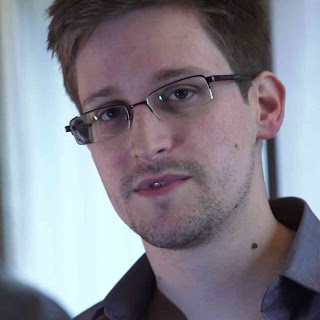 Melissa Harris-Perry, who for some baffling reason has her own show on MSNBC, has written an "open letter" to go along with a segment on her show in which she DEMANDS that Edward J. Snowden return to the U.S. to face the consequences of his actions.


Far more absurdly, though, she also "scolds" Snowden for purportedly making himself the focus about himself rather than the NSA spying revelations about the cartoonish dystopian levels of spying in which the American Empire & Its Oligarchy are engaged through its ever-metastasizing military / industrial / surveillance / corporate-fascistic complex. You can read more about this and Glenn Greenwald's response here. 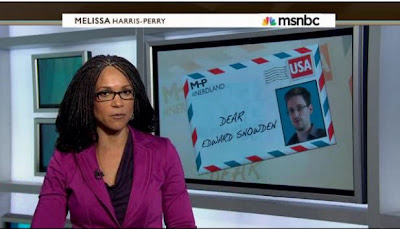 For starters, concerning her demand, she is basically telling him to return to life-long torture physical and mental and solitary confinement, or maybe even just the death penalty by secret military tribunal. Daniel Ellsberg himself concurs in this assessment.
Secondly, her claim about how the Snowden is somehow forcing the media to cover him as the story rather than the NSA / Obama abuses is pure absurdist theatre that is on par with David Gregory "asking" Glenn Greenwald why he shouldn't be charged with spying and treason for engaging in actual journalism. This is the nature of the American whore-media / entertainment complex. I cannot reiterate enough the point about the damage this multi-tentacle hydra is causing our democracy is incalculable (but let's leave that topic aside for now). 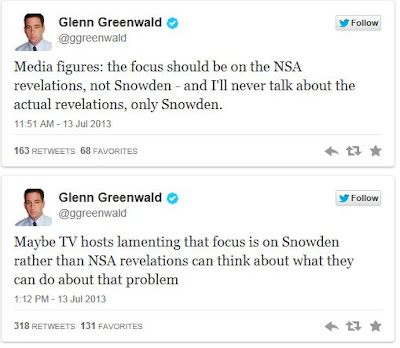 Above are screenshots of two response Tweets that Glenn Greenwald sent out today in response to Harris-Perry's assertion.
*******


Her assertion is kind of ironic and funny to me. You see, I can watch on my RCN Channel 30 English Al-Jazeera to get actual news about actual events in the world rather than bombastic egomaniacs, SHARKNADO! Weather Channel / Nat-Geo enviro-porn, Nancy Grace AMBER ALERTS because little Taylee-Smith went missing outside the Yazoo City Walmart, this-or-that "trial of the century," an endless parade of Ministry of Truth and Ministry of Peace propagandists, and the Red/Blue Manichean faux-Civil War that is fought nightly across the unwatchable cable dial, all in between commercials for drugs for better sex and incontinence, obnoxious SUVs, macaroni-and-cheese, idiot reality shows that have hit a sort of nadir of American civilization in Honey Boo Boo, and whatever hyper-violent Mark Wahlberg or jackass Adam Sandler Hollywood garbage movie is set to be released this week.

Another Tweet from Glenn Greenwald today regarding this issue -- and this one directly to Melissa Harris-Perry, who called him a "jerk" in her open letter.
*******


The motivation for her letter, if there is one, is Snowden's ongoing efforts to seek temporary asylum in Russia. The issue here is that he is basically unable to get to any of the countries offering him asylum without putting himself at risk for American fighter jets intercepting the aircraft (maybe even shooting it down in a Star Spangled Banner / Let-the-Eagle-Soar / Like-She's-Never-Soared-Before moment), or having any of America's countless client states causing some airspace access incident (as with the President of Bolivia recently) that requires an emergency landing.
Harris-Perry is, of course, a pathological Obama worshiper who can't get enough of him -- and who excuses actions that if Bush the Lesser had done it, she would be shrieking and howling in indignation. Having her as a TV pundit to discourse on anything is in equal parts absurd and insulting to the progressive-minded viewers who tune into MSNBC. 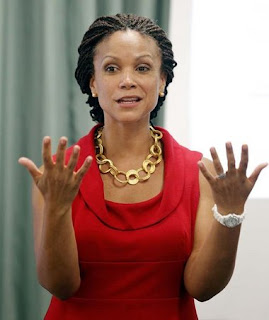 Harris-Perry is the kind of person who is well-suited to be the dean of students at some loopy idiot American liberal arts college -- the kind with $50,000 a year tuition plus another $15,000 in "fees" -- where there exists a reign of political correctness terror and where special committees of academics work endlessly to ensure campus "diversity" in all things. Harris-Perry is not the kind of person who should be a TV pundit and "analyst" because she has no clue what she's talking about.


You might just as well hire The Washington Post Editorial Board and op-ed columnists to help you set up a healthy and functioning country based upon the principles of The Washington Consensus.
--Regulus
Posted by Regulus at 9:44 PM