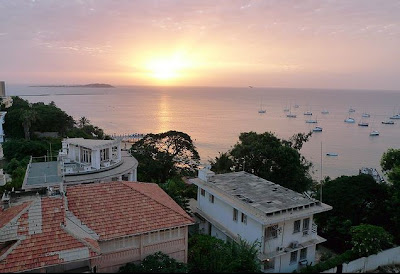 Sunrise from the Pullman Teranga hotel in Dakar with Goree Island in the distance. This photo came from Patrick Smith's Flickr site (see link below). Direct link here. (I'm a little confused here since I thought the Sun sets over the Atlantic as seen from Dakar, but maybe it's a harbored coastline of some sort.)
*******


This entry contains extended excerpts of a second piece that pilot and author Patrick Smith wrote in January 2012 in Salon that I have wanted to relate. 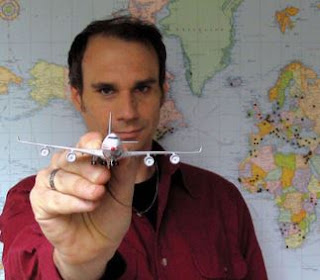 To explain, in an entry earlier this week, I discussed why I have stopped going to the site Salon.com even though there are some writers there -- including Patrick Smith -- that I really like. In Smith's case, he appears no longer to write for the site but still has his site AskThePilot.com.


In that entry, I excerpted sections of another Jan. 2012 Salon piece discussing the "sinewy splinter of grass and dunes" known as Sable Island off the coast of Nova Scotia.
This entry contains some excerpts of his piece Out of Africa, which reflects on how bad things have gotten in Senegal and other parts of French West Africa, where he has visited as a pilot numerous times. He also has lots of pictures on his Flickr "Globe Trodden" pages. I have included some pictures from that site and others that I found (with captions added).
Also, I totally relate to the part about the hilarity of the name "Upper Volta" -- the former name of Burkina Faso -- to myself as a 7th grader back in the early 1980s. My childhood best friend Jonathan and I laughed at that name at the Jersey shore in Sea Bright circa 1982. 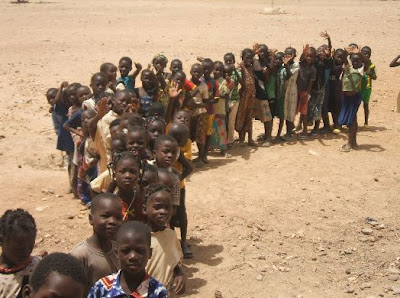 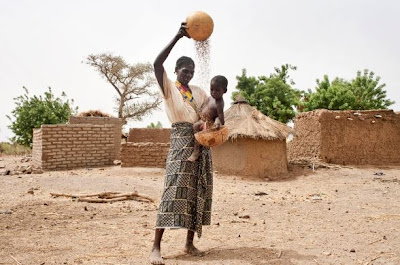 A woman holding a baby pours seeds on the arid ground in Burkina Faso.
*******

I love the flight into Dakar, but in Senegal I see how the world is falling to pieces, right in front of me
by Patrick Smith


Americans will pronounce it hypercorrectly, with the "a" sound too shortened. "D'Car." Sort of the way they say "Khaaan" instead of "Can" when referring to that certain city in France.
The Senegalese say it more forcefully and flatter, both syllables equally stressed: "Dackkar." 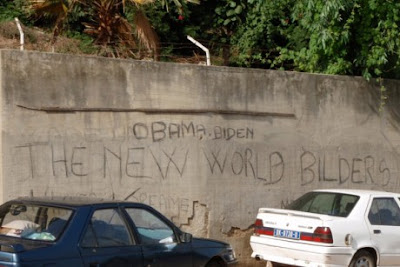 
There used to be graffiti here, scratched out in what looked like charcoal, on a concrete wall behind the Pullman Hotel. "OBAMA, BIDEN," it said. "THE NEW WORLD BILDERS [sic]" You can see it above.
This was just before the election in 2008, when so much of the world, it seemed, was looking at America with a renewed sense of optimism and expectation. "Hope" was the big word, if I remember right.
That fever has passed. And the graffiti is gone now, blotted away with gray paint ... 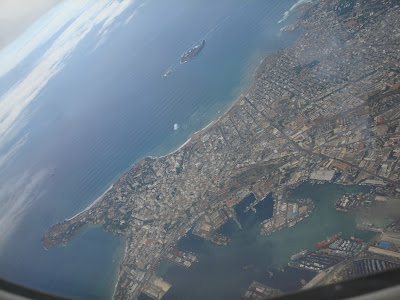 
I enjoy the flight into Dakar. The way the Cap Vert peninsula appears on the radar screen, perfectly contoured like some great rocky fish hook -- the western-most tip of the continent, and the sense of arrival and discovery it evokes. There it is! Africa! 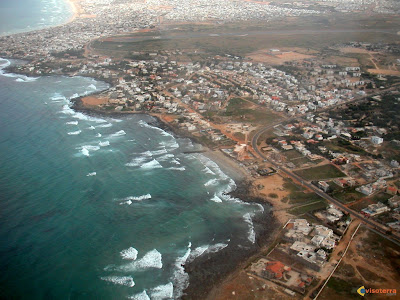 Another aerial view of the coastline along Dakar, Senegal
*******

And in the evenings, the raptors, hundreds at a time in immense black flocks, spiraling over the concrete high-rises.
Yet it's also true that the more time I’ve spent in Senegal, the less I’ve come to like it. The country has a way of beating you down, sucking your faith away. The heat, the garbage, the pickpockets and hustlers.
Everybody hitting you up for something. Nobody smiling. 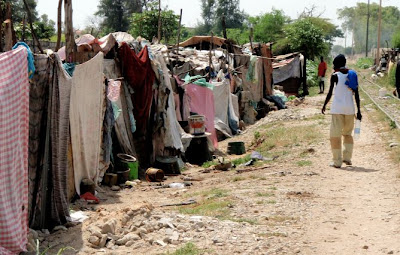 One of the images of the Route de Rufisque slum on the outskirts of Dakar that Patrick Smith photographed in Oct. 2008. There are other pictures of Dakar's slums in that photo set.
*******


This is one of those places where you will see, right there in front of you, how the world is falling to pieces, its resources ravaged, the landscapes strewn with plastic. And there is little that you, as the Western observer, with or without your good conscience, are going to do about it.
They're spending billions on a new airport while the literacy rate hovers near 30 percent.
I come out of [restaurant] Layal tonight and give my leftovers to one of the city's uncountable urchins. The kid is 6 or 7, barefoot, begging with a tomato can. "Talibe," these vagrant boys are called.
He takes the bag without looking at me. No acknowledgment; not a glimmer of thanks. He grabs it the way a stray dog might grab a pork chop out of your hand.
_______


Eastbound over Senegal, crossing into Mali. Predawn plumb-light, then sunrise. A hot red sphere balanced perfectly on a razor-straight horizon; the River Niger like a mirrored snake casting itself across the Sahel. 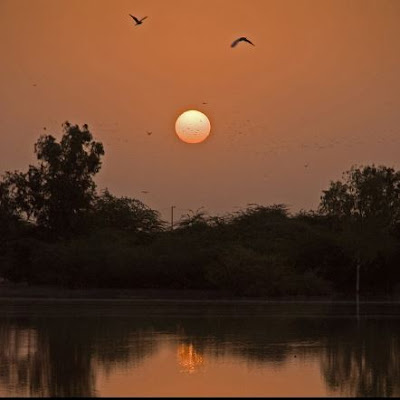 
Over the sewer-gutter town of Mopti, where I spent two days in 2002 on the way to Timbuktu. It looks so placid from 33,000 feet. I remember the riverfront trash, the shattered boats and the heaps of firewood raided from the forest. Naked children splashing in the greasy water. 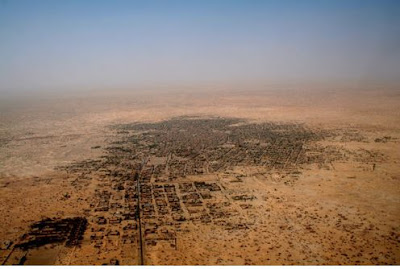 Jet-liner aerial view of the fabled city of Timbuktu.
******


The Bandiagara Escarpment is next. Home of the Dogon people, though you can’t see them from a 767. I was there, too. We camped out. 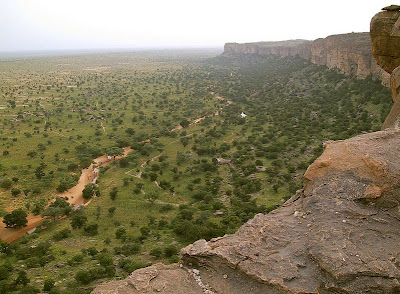 Sandstone cliffs of the Bandiagara Escarpment in Mali, September 2001. This is a UNESCO World Heritage Site.
*******


The land below is the exact texture of 40-grade sandpaper, splattered with gray-green turds that turn out to be small villages. Each is a tiny star with red clay roads radiating outward. 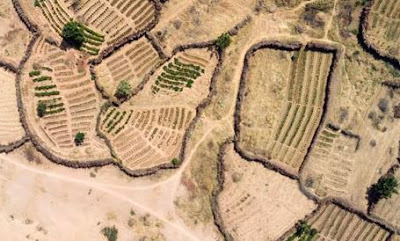 Aerial view of irrigated gardens along the Niger River in Mali.
*******


I remember a New Year's Eve, on this same run, and midnight over the capital city of Bamako. The fireworks erupting below. Tiny points of light like fireflies. Tens of thousands of homemade incendiaries. Bamako’s party looked like war.
Burkina Faso now. "Upper Volta" they used to call it, a name we found hilarious in seventh grade.
I wanted to be a pilot then. 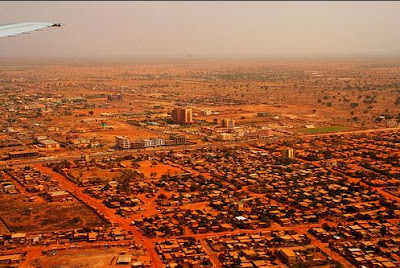 Aerial view of Burkina Faso's capital city of Ouagadougou in January 2009. It is pronounced something like "Ooh-wah-ga-DOO-goo").
*******


Into northern Ghana. The controllers are friendly and polite, their instructions calm and measured.
The same can't be said for Kano, welcome to Nigeria. Say again? Repeat, please, Kano? Please? Say again? Over? Their voices are so angry and uncooperative that you want to turn around and fly home, like a dog retreating from a scolding.
The drive into town takes an hour. 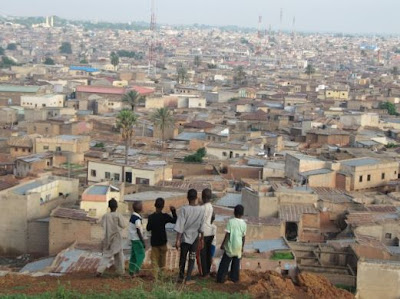 
The topography is vaguely prehistoric -- everything rendered a deep, almost putrefied green, with insanely jutting karsts reminiscent of Vietnam or the south of Thailand. The trees are clumped and gnarled. Goats, no dinosaurs.
The man sitting next to the driver has an AK-47 and a Kevlar vest. He turns around and smiles.
We tip him well. 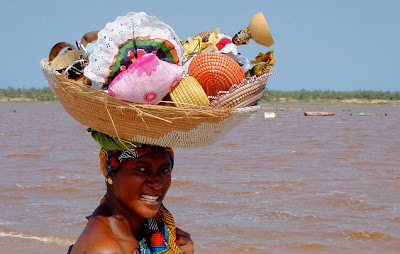 One last Patrick Smith photo: A woman at Lac Rose in Senegal carrying a veritable basket on her heat. Carmen Miranda had nothing on that functional chapeau!
*******


OK, that's all for now. Please see my preceding entry for update and why I may not be able to update this blog much between now and next Tuesday.
--Regulus
Posted by Regulus at 2:20 AM