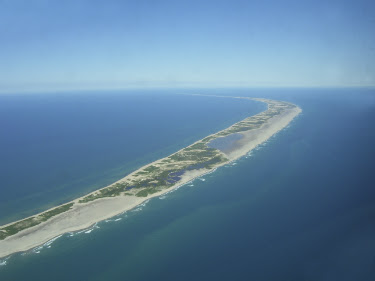 
In my July 12th, 2013 entry, I noted that I had to part company with the site Salon.com owing to repeated issues of what appears to be spyware or other malware on it, and despite the fact that there are some authors -- regular, contributing, and special -- that I really like. 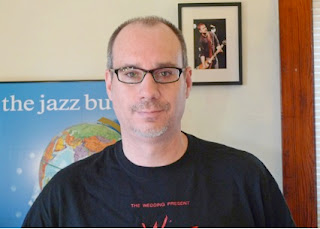 One of those is Patrick Smith, a pilot and author whose main Website (which I did not mention in that entry) is AskThePilot.com. Smith is pictured at left.


The site includes an "Essays & Stories" section, although his Salon.com ones were not. In particular, there were two excellent pieces he wrote on Salon on consecutive weeks in January 2012. (He apparently no longer writes for Salon.)
One was "Out of Africa" about his experiences in French West Africa, and how it seemed to him that the world (or at least that part of it) really is falling apart. I will excerpt that one in a subsequent entry. The second one is "Who Needs UFOs?" that discusses the incredible and spectacular views of heaven and the Earth that are visible from the cockpit window -- and hence the rhetorical question-as-answer to the actual question "Have you ever seen anything really weird or fantastic (while flying)?" 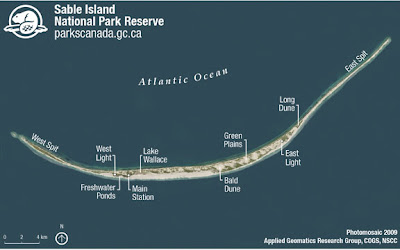 
In this piece there is an extended reflection on Sable Island (located about 200 miles ESE of Halifax, Nova Scotia and belonging to Canada (and not to be confused with Cape Sable Island at the southernmost tip of Nova Scotia)). Below is the part on Sable Island along with some online photos I found showing the island.
Excerpt:

Other views aren't spectacle so much as just peculiar.

One afternoon we were coasting in from Europe, about 200 miles east of Halifax, Nova Scotia. "Gander Center," I called in. "Got time for a question?"

"Do you have any idea what the name of that strange little island is that we just passed over?"

"Sure do," said the man in Gander. "That's Sable Island." 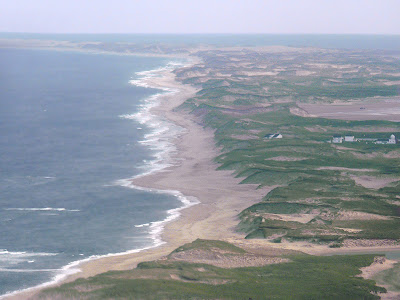 Sable Island is one of the oddest places I've ever seen from aloft. The oceans are full of remote islands, but Sable's precarious isolation makes it especially peculiar. It's a tiny, ribbony crescent of sand, almost Bahamian in shape and texture, all alone against the relentless North Atlantic. It's like the fragment of a submerged archipelago -- a miniature island that has lost its friends. 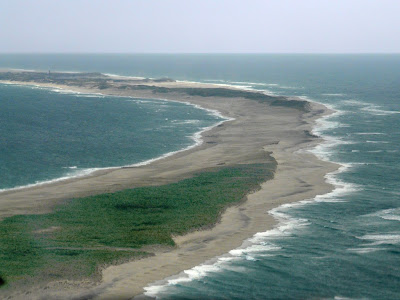 I'd flown over Sable many times and had been meaning to ask about it. Only later did I learn that the place has been "the subject of extensive scientific research," according to one website, "and of numerous documentary films, books and magazine articles." Most famously, it's the home of 250 or so wild horses. Horses have been on Sable since the late 18th century, surviving on grass and freshwater ponds. Transient visitors include grey seals and up to 300 species of birds. Human access is tightly restricted. The only permanent dwelling is a scientific research station staffed by a handful of people. 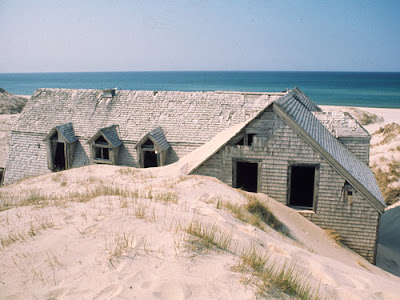 "Island," maybe, is being generous. Sable is really nothing more than a sand bar, a sinewy splinter of dunes and grass – 26 miles long and only a mile wide – lashed and scraped by surf and wind. How staggeringly vulnerable it appears from 38,000 feet.
Odder, even, than a UFO.

What follows are a few more pictures ... 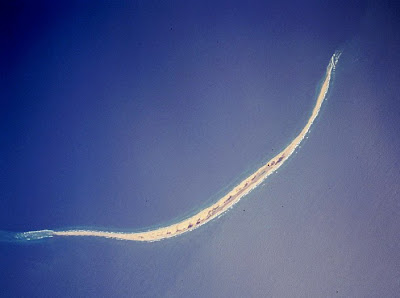 Satellite view of Sable Island. I think north goes off at about a 30 degree angle to the left.
******* 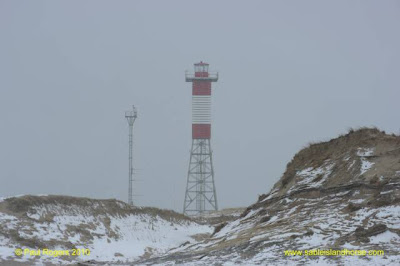 One of the two lighthouses on Sable Island as seen in the snow.
******* 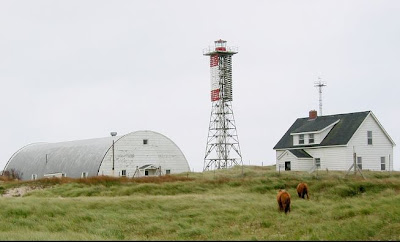 The West Lighthouse on Sable Island (one of two such light beacons) and a couple horses among the herd that populate the island.
*******