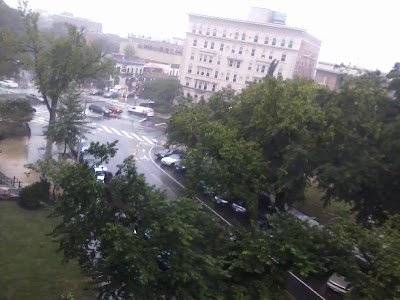 View from my Hampton Courts 5th floor apartment during a downpour overlooking New Hampshire Avenue and the intersection of 16th and U Streets NW, Washington, D.C., 5:11PM July 27, 2013.
*******


For starters, we had a quick thunderstorm blow through the area, though it looks like KDCA only had 0.09" and KIAD 0.19". The radar shows it moving into the Baltimore area and Anne Arundel County, but it may just graze BWI Airport (KBWI) and the nearby area where my mom lives (Millersville). The remaining images in this short entry are screen captures of NWS radar images over the past 90 minutes with explanation. The weather continues to be quite "mild" this summer -- there is no sign of any hellish heat coming (the previous week's hot weather was an anomaly this summer) -- and it continues to be sufficiently wet. 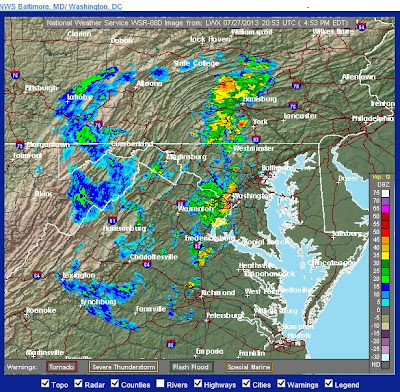 
Secondly, I didn't get up until 130PM, and then I had to work for a solid 3 hours on the big Hawaii report, editing, formatting, and assembling one of the chapters. This draft document, a real door-stopper if printed out, has a drop-dead due date of the 31st. Actually, it's in electronic form, and if I may say so, it is quite comprehensive and has tons of useful and important info -- I really hope it is put to good use in its intended location for its meta-purpose. However, the complexity of it has been akin to a complicated jigsaw puzzle or Lego set with so many subsections to evaluate. I've built up nearly 11 hour surplus this pay period working on this project. 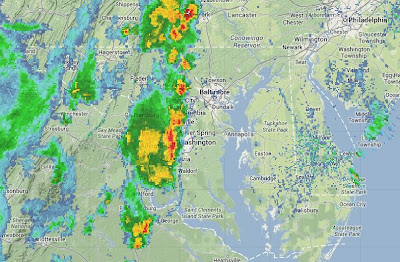 This is actually the new experimental enhanced data display (including radar images) that the NWS is developing, in this case, showing the radar at 5PM today (July 27, 2013) as the aforementioned cluster of t-storms approached the D.C. area.
The display should be a nationwide one, but I honed in on Maryland, Northern Virginia, and the District of Columbia. I'm still not entirely sure of all the new toggles and buttons on this display, and you have to zoom in initially starting with a Google world map (which is not entirely practical for ease-of-viewing). 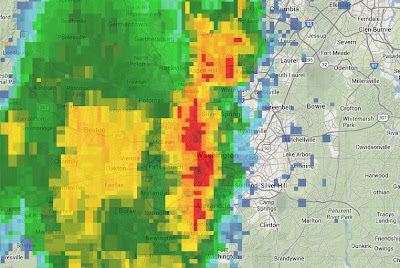 Here is a close-up of the 5:00PM experimental radar display showing the same t-storm as it moved across the immediate D.C. area.
*******


As a result of working, I did not get to the gym today, but I went yesterday evening and I intend to go tomorrow. I was a bit concerned going for a regular workout (jogging, weight-lifting, and swimming) given that my gum infection is not entirely gone and I'm still on antibiotics, but it didn't make anything worse. About that topic, I still have a very minor bit of swelling on the left cheek but it's not immediately noticeable. Nevertheless, given my history with this issue, I am still concerned. 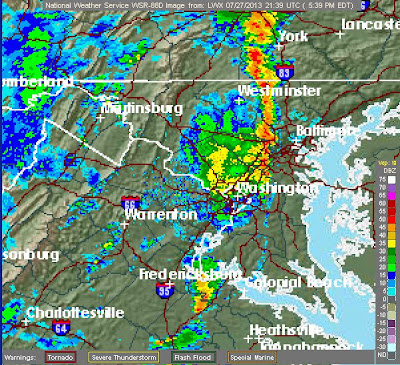 The LWX radar back in enhanced base mode reflectivity at 5:39PM (July 27, 2013) but with a slight close up (which you can do with the looped images, except you have to hit the stop button). This shows the storms marching toward Baltimore and northern Anne Arundel County.
Notice the outflow boundary stretching in an arc from the storms down to the tidal Potomac below Charles County and heading eastward toward the Chesapeake.
*******


Last night, I went to Larry's Lounge, where I met Gary and then went home, though I detoured to Local 16 briefly. As for tonight, I'm supposed to meet Quill for dinner, except I'm not exactly sure where to go. I would like to go to an Italian place, and I'd like to try something different. It's not that there is a shortage of restaurants in D.C., but I really don't have one that I love above all others. The closest to that, I guess, is Old Ebbitt Grill at the Old Bar. I would go there but you have to wait until at least 930PM for it not to be too crowded.
Apparently, her boss went to China and came back with some viral infection that he then managed to give to her. She would not do well in China. Neither would I.
I'm going to try to post a quick jukebox Saturday night entry.