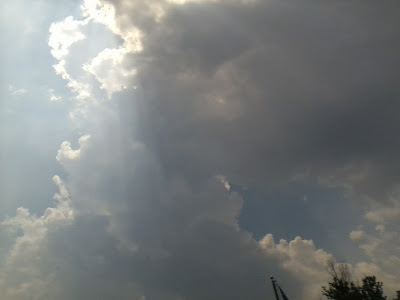 
I just got back from the gym where I had a decent work out -- 5.5 miles on the treadmill, some weightlifting, and 22 laps (or 44 times back and forth) over about 45 minutes in the swimming pool. I skipped both Thursday and Friday. I would like to go tomorrow since my work schedule for Monday and Tuesday is uncertain given how much I have yet to do.
Before I get to that, though, I also have just made dinner: I "fried" up the Tyson grilled chicken strips (that come in a bag) and boiled some rice (also in a bag) and steamed some broccoli and carrots. I added a little butter to the boiling water, which makes the broccoli taste a bit better. I put the whole concoction in my wooden bowl -- one of the two bowls I own along with a single fork, spoon, and knife -- and it's pretty good.
I'm presently watching the news -- as in REAL and ACTUAL world news -- on Al Jazeera English, not the carnival-barking, low-rent info-taining nonsense and bombastic opinion-mongering that is American corporate cable "news" shows (right and left) all for the sake of further enriching and empowering the oligarchical corporate top 0.1% over-class We won't even get into the freak show that is local news. 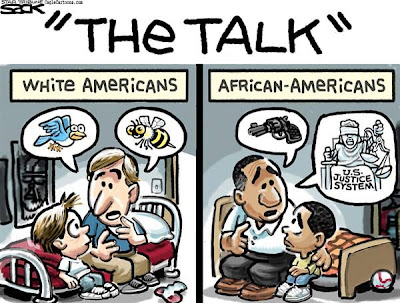 Oh, yes, I wanted to mention that it turns out BOTH my father and mother -- amazingly -- agree on the George Zimmerman verdict. They both feel the not guilty verdict is a travesty of justice. Pres. Obama, for his part, made a genuinely startling statement when he said that Trayvon Martin "could have been me, 35 years ago." Jesse Jackson, Al Sharpton, and the MSNBC crew are leading the charge to have the Feds (i.e., the Justice Department) come in invoke Federal Civil Rights violation charges against Zimmerman (a bad idea).
The weather has been hot and VERY humid for the past six days with highs (at KDCA) ranging from 94F to 97F, lows around 80F. KBWI and KIAD has had similar highs but lows in the 70s. This is not record heat, esp. for this time of year, but dew points have been very high -- reaching 80F on the 18th at the 7PM observation following a thunderstorm that dumped 1.04" of rain officially at the airport climate station. (As has been occurring this year, KDCA had the jackpot with KBWI and KIAD missing any rain that day, although KIAD had that 4.5 inch event earlier this month.) Thunderstorms are in the forecast for the next several days with temps mostly in the upper 80s Fahrenheit for highs.


I wanted to post some pics that both Gary and I took on Thursday at a Team DC "Champion Awards" event at City View, and where I met Wade Davis, a former Washington Redskins football player and now openly gay and trying to do various sports-related work. 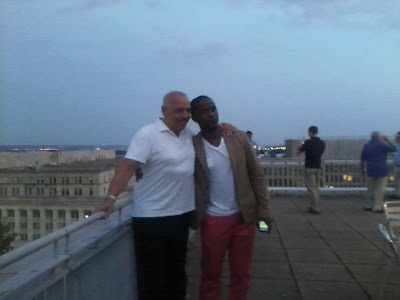 A (blurry) picture of Wade Davis and a person who, I think, is a sports writer and/or editor for The Washington Blade, 8:48PM, July 18, 2013.
Gary and I had our picture taken by the summer photographer intern Damien, but I haven't found the pics on the site yet (or maybe it won't be posted). 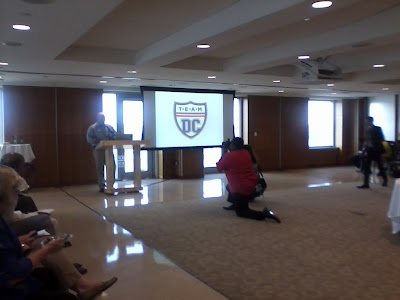 Brent Minor, the head of the Team DC umbrella organization, addresses the crowd at the Champions Award at City View, Washington, D.C., 7:26PM July 18, 2013.
Nellie's hosted this event and there was an open bar and finger food. 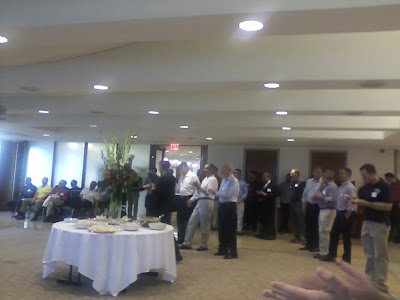 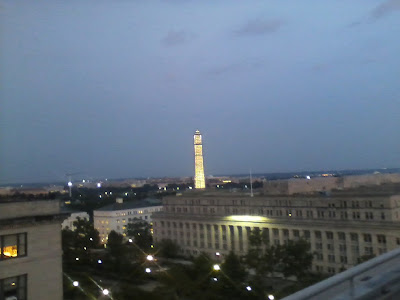 The Washington Monument as seen from City View, Washington, D.C., 8:47PM July 18, 2013.
City View is a reception hall atop GWU's Mitchell Hall at 1957 E Street NW.
The Monument is presently illuminated at night thanks to the strategic placement of 488 lamps with respect to the scrim-lined scaffolding and resembling (just as it did in 1999-2000) a giant Japanese paper lantern. 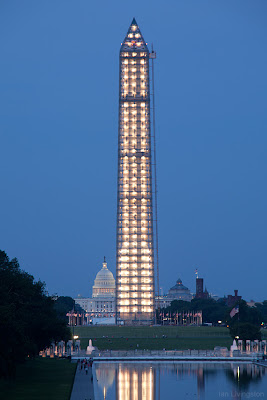 It was on July 8th, 2013 that the lighting was switched on, and it should remain that way until the scaffolding is removed once the Aug. 2011 earthquake damage is repaired.

This is a better picture that CWG's Ian Livingston took on July 8th, 2013 (see link above).


I finished one assignment today, specifically, copyediting a 65 page report that is part of the geothermal technical working paper series I was involved in several months ago.
I still have to finish the big Hawaii report assignment -- formatting and copyediting the many subsections of the various chapters. At this point, I've done about 65 of the potential 454, though only about 300 of actually been submitted and this weekend (tomorrow) I need to do as many as I can.
That's about all for now. I'm meeting Gary and Wendy at Larry's Lounge a bit later, and then I'll go to No. 9 and Nellie's. I met them last night at No. 9. Wendy's power in her Columbia Heights neighborhood has been out for nearly 24 hours now, which is a huge pain when you are trying to study for the bar exam. I think she's staying at Howie's tonight (he's away this weekend).
I may post a quick entry tomorrow to note the passing of one of my great uncles (one of my late grandmother's much younger brothers, whom I met at Aunt Babe's 100th birthday last January in West Long Branch, New Jersey). (Babe is doing fine.)
--Regulus
Posted by Regulus at 9:35 PM