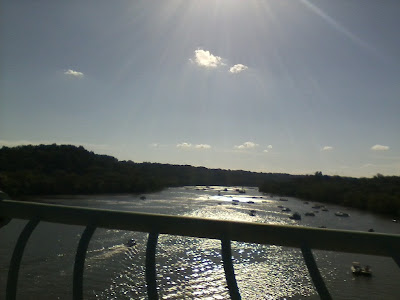 The Potomac River crowded with boats and shimmering in late afternoon sunlight on Independence Day as seen from the Francis Scott Key Bridge, 5:33PM July 4, 2013. The boats were gathered on the river to watch the fireworks display several hours later.
*******


Don't even ask about my 4th of July. It involved the Exorcist Steps, too many spiced rum shots at a backyard BBQ in Arlington, and a 2-1/2 hour black out period between about 1130PM and 2AM during which time I lost may wallet, keys, and (oddly) my belt. 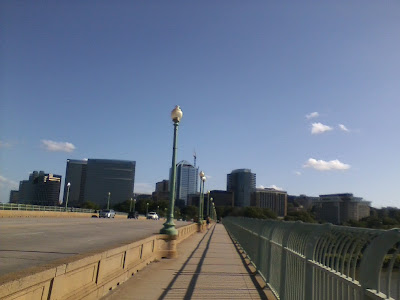 The skyline of Rosslyn as seen from the Francis Scott Key Bridge over the Potomac River, 5:33PM July 4, 2013.
Two items: First, the Potomac River is technically entirely in the District of Columbia (and Maryland), so this picture was actually taken still in D.C. Secondly, the new skyscraper at 1812 N. Moore Street is visible in this picture. At 390 feet high, it is supposed to be the tallest building in the D.C. Metro area.
*******


I biked over to Arlington to Jake's place near Ballston -- first on a circuitous route through D.C. that took me first to Dupont Circle and then over to Georgetown and the Exorcist Steps (carrying the bicycle, obviously) to the Key Bridge -- and across the Potomac Ocean River into Arlington and thence to the Custis Trail, which is surprisingly hilly and mostly uphill heading west. 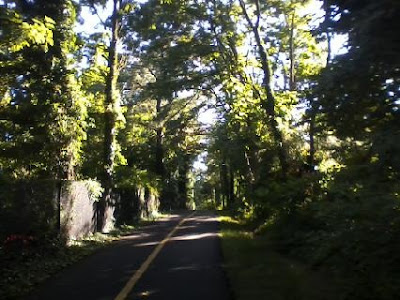 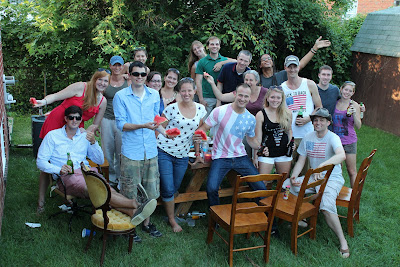 
It took about an hour to get there. I was the oldest in the group (it was Andrea & Company's friends). This is where the drinking started. We left my bicycle in the Jake's shed (where I think it still is). We left around 815PM to see the fireworks, taking the Metro to Rosslyn and walking to the Iwo Jima Memorial. There was a big crowd there in the warm, cobalt blue dusk and the roads were blocked off to vehicular traffic. We found a spot on a grassy knoll and watched the fireworks, although from that spot I couldn't really see that much. 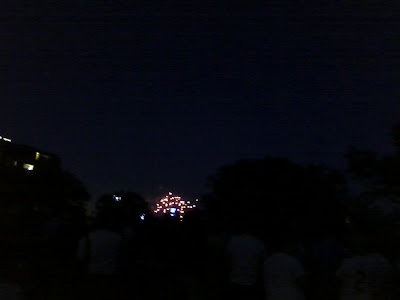 This is about as good a picture of the fireworks as I got on my crummy cellphone camera from where I was near the Marine Corps War Memorial (Iwo Jima Memorial), Arlington, Va., 9:17PM July 4, 2013.
******* 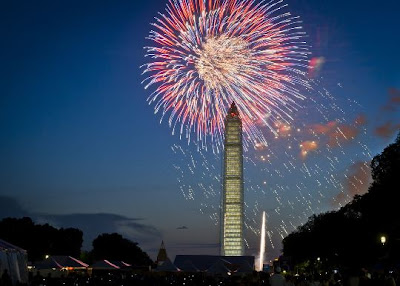 Here is a picture of the scrim-decorated scaffolding-encased Washington Monument during the fireworks display, July 4, 2013. This image and additional "Capitol Fourth"*ones are available here.
*Yes, it's spelled "Capitol" in this case.


Oh, yes, I FINALLY figured out the complicated blinking pattern of the navigation warning lights on the top of the Monument involving the regular four pairs of lights and the single light on each side that is "over" each of the pairs. This is discussed below with the final batch of pictures accompanying this entry.
*******


Now some of the nearby high rises -- including the Prospect House with its astonishing view looking down the axis of the National Mall -- I'm sure the view was tremendous. Folks were chanting "U-S-A! U-S-A!" so I chanted "N-S-A! N-S-A!" (just a couple times ... well, I thought it was funny).
At my behest, we went over to the Quarterdeck restaurant, where I had not been in years. It was Andrea, Imara, Jake, Matt, and some others. Foolishly, I had more liquor and no food. The place may be best known for its crabs. 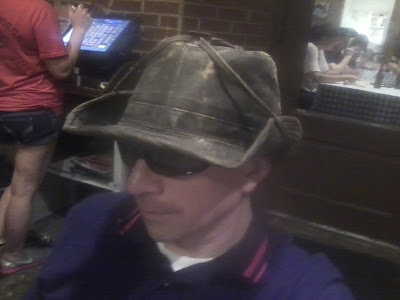 
Things get blurry thereafter. I kinda remember taking the Metro back into D.C. around 1130PM but everything thereafter is lost until I got home, at which point I had no wallet, keys, or belt, though I still had all my money and cell phone. I thought maybe I had stopped at No. 9, but it doesn't look like I did. I'm fairly sure I went somewhere but I didn't spend that much. Apparently, I alighted the Metro from Farragut West rather than riding to U Street/Cardozo. I've no recollection of that. 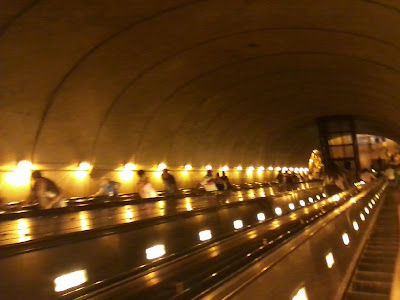 
The building maintenance man let me in. He also got me a new front door key this morning. That cost me $40 combined. I had a spare key for the apartment door and deadbolt. However, he was kind enough to have a spare made of the apartment door key and mailbox key. When he returned about 40 minutes later, I gave me another $20 for his troubles.
So that escapade set me back (as of now) $60. I guess I'm just pathetic. 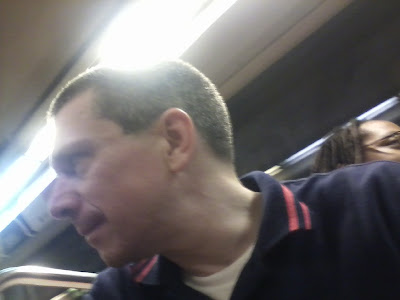 
Today, I was wiped out. However, I still made it over to the DMV right next to the Rhode Island Avenue Metro and got a duplicate license. However, I was required to take a new picture (and it actually did not come out that bad, which is all the more remarkable given my condition). I also got to update my weight. I put 157 pounds rather than the 170 that had been on it (though in fact when I got it, I was more like in the low 180s). 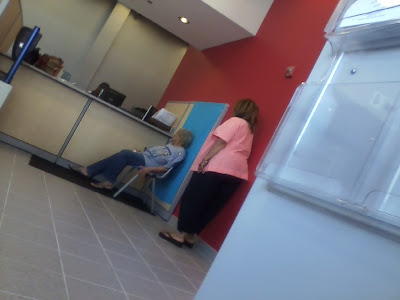 Two ladies including the older one getting her drivers license photo at the D.C. DMV Rhode Island Service Center, Washington, D.C., 3:47PM July 5, 2013.
The older lady getting her picture taken was inadvertently hilarious in what she was saying and her expressions -- making an exaggerated smile that instantly was replaced by an exasperated grimace that was actually caught in the flash photograph.
*******


The area around the Rhode Island Avenue Metro is unrecognizable from what had been there -- a large parking lot and beyond it an overgrown gravel hill. Now it is a little "town center" retail and condo complex. The weird thing is I have a memory being there almost 21 years ago to the day on July 7, 1992 -- I know the date because it is part of a long and painful story that was the reason I ultimately moved to the D.C. area two months later.
I also went to the Bank of America at Dupont Circle and was able to get a temporary ATM card. The bank lady (Angela) was very nice and helpful about it.
I still need to get a new belt and wallet.
Needless to say, I took the day off from work. As for tonight, I would be a goddamn fool to go out again. As for the bicycle, I'll retrieve it on Sunday.
******* 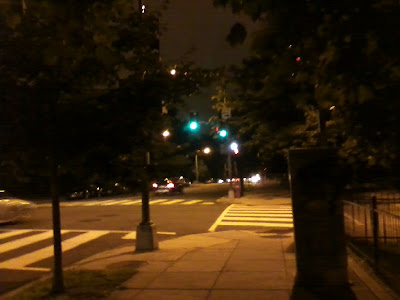 The intersection of 16th and R Streets NW, Washington, D.C., 10:43PM July 1, 2013. It was a purely tropical night with wanly illuminated fast-moving cumulus and stratocumulus clouds tearing across the velvety sky.
*******


For the remainder of this entry, I would like to post some pictures I've been meaning to post. The first batch were taken on my walk home from work on Tuesday and the second batch were taken nearly two weeks ago on my bike ride down to the National Mall and over to the Watergate. 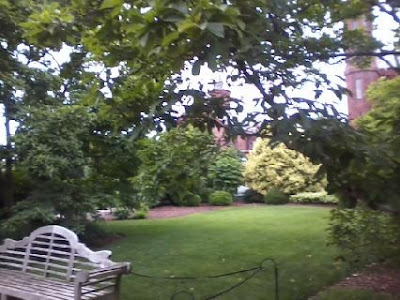 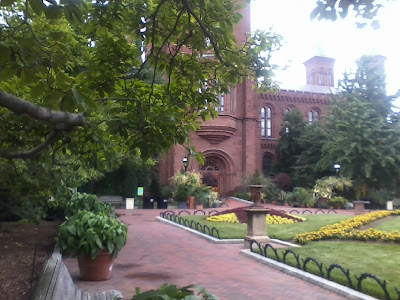 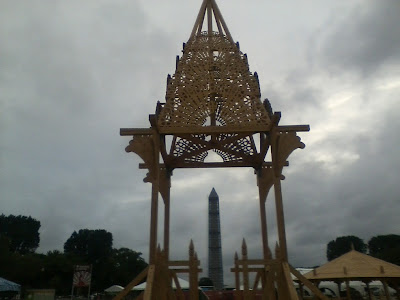 A wooden pagoda on the National Mall as part of the Smithsonian Folklife Festival and the Washington Monument, Washington, D.C., 7:43PM July 2, 2013.
*******


OK, the next few images feature the spooky and (to me) deeply curious "Zion Building" located at 1017 12th Street NW in downtown Washington, D.C., which I've discussed in previous entries on this blog. 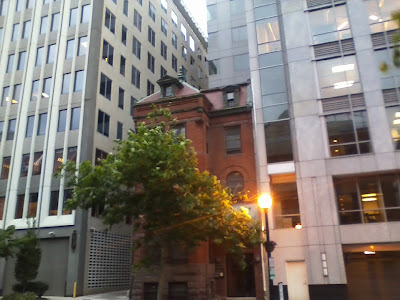 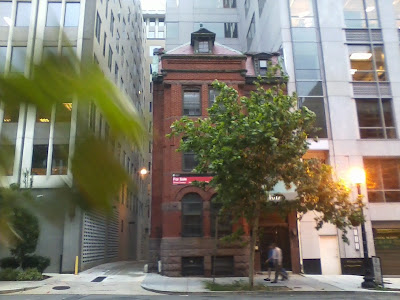 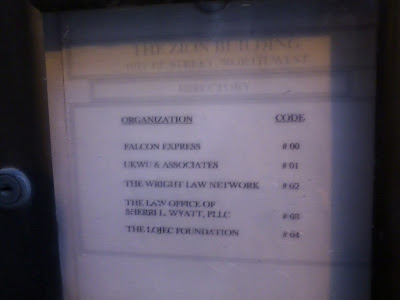 The Directory of the spooky Zion Building with strange companies such as Falcon Express, Ukwu & Associates, and The LOJEC Foundation, Washington, D.C., 8:09PM July 2013.
I'm not actually sure the building is presently occupied by any business.
******* 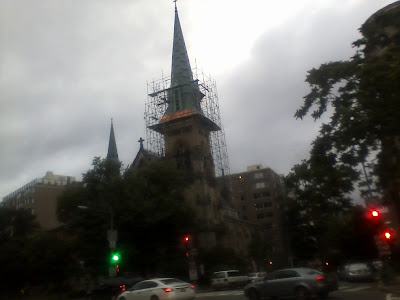 The Church of the Ascension and Saint Agnes at 12th Street and Massachusetts Avenue NW, Washington, D.C., 8:11PM July 2, 2013.
The steeple is covered in scaffolding and it APPEARS as though it is being cleaned or replaced -- so that the bronze appears as it (probably briefly) originally did rather than with the oxidized copper green patina. At least I think that's what's going on here. I could be wrong. I'd still like to see that done to the Statue of Liberty. It would look so cool.
******* 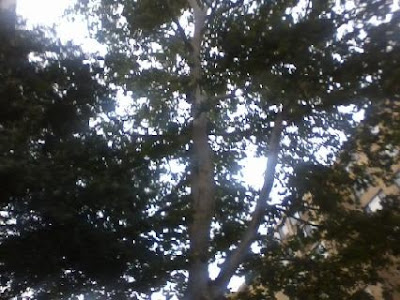 The giant sycamore tree that grows in front of Horizon House at 1150 12th Street NW, Washington, D.C., 8:13PM July 2, 2013.
This tree is at upwards of 11 stories high or at least 100 feet tall. You can see it from the National Mall looking north up 12th Street. Not only is the tree very tall and expansive but it is at the top of the first elevation rise.
******* 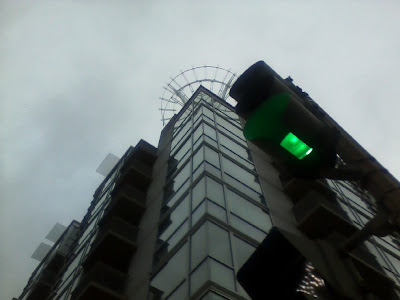 Ah, the Solo Piazza penthouse condominium building at 1300 13th Street NW, Washington, D.C., 8:18PM July 2, 2013.
This building includes The House Vapid Condo That Love Built Endless Huge Tips Bought.
The top architectural foofery of this Furioso Development property visible in this image is, I think, some sort of postmodern "quotation" that is meant to suggest or "quote" a backyard wisteria-covered trellis.
*******

The final batch of pictures were taken on my June 23rd, 2013 Sunday bike ride. 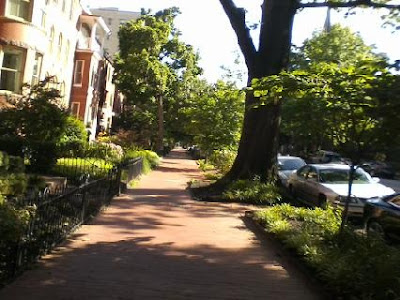 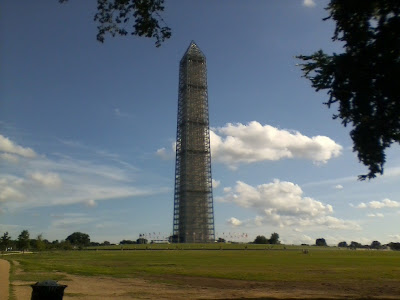 The scrim-decorated scaffolding encased Washington Monument, 5:52PM June 23, 2013.
So the deal with the red navigation warning lights atop the Monument is this: There are the twin pairs of lights on each side, or eight in all. These blink in unison and have ever since February 1995 when a synchronization switch was installed. But the scaffolding contains a smaller single light on each side -- and that is "in front of" the each pair of lights. These four lights also blink in unison but out-of-phase with the regular pairs of lights.
The result is a seemingly complicated and shifting pattern of nighttime flashing red lights that gets even more complicated looking when the red lights reflect off the scaffolding.
******* 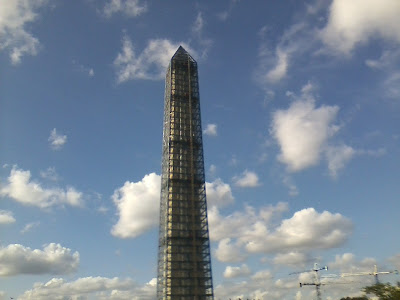 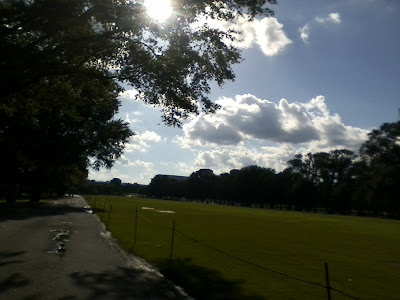 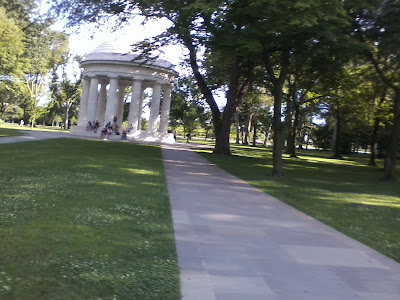 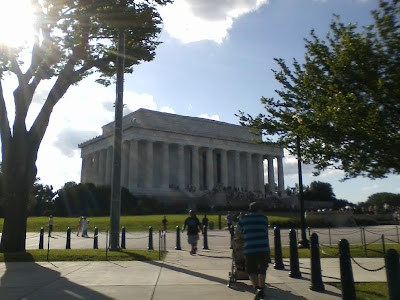 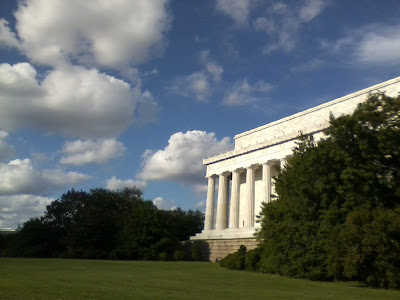 The backside of the Lincoln Memorial, 6:02PM June 23, 2013.
Very few tourists of the millions of tourists who visit the Lincoln Memorial every year ever think to go back there among the giant columns with the sweeping view across the Potomac River including Arlington Cemetery's Arlington House / Robert E. Lee Memorial; the Prospect House; and the towers of Rosslyn.
******* 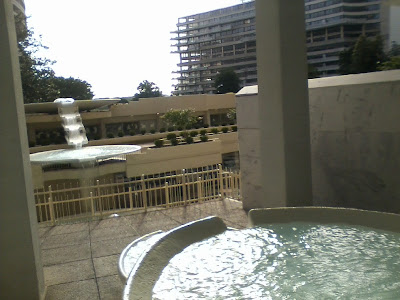 
OK, that's all for now. I am not going to post a Friday night musical interlude but instead will try to post a Saturday night one.
--Regulus
Posted by Regulus at 8:52 PM

how come no pictures of giant puli? i can't imagine it's gone already...

regarding your blackout - "gotta be a little careful", next time you might wake up in thailand married to a russain lady tourist with two grown up sons...