You say "derecho," I say "MCS," but let's not say "heat burst" -OR- Adventures in June Weather 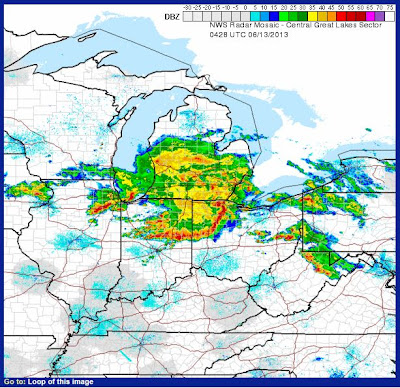 The Great Lakes sector radar mosaic at 0428 UTC (12:28AM EDT) June 13, 2013 showing the mesoscale convective system (MCS) over northwestern Ohio, northeastern Ohio, and southern / central Michigan that may bring violent weather to the Washington, D.C. and Baltimore areas by mid-to-late morning (itself an unusual time for such weather).
Of course, this presupposes the MCS holds together or reforms east of the Appalachians rather than simply dissipating.  The antecedent set up is not the same as in the June 29, 2012 "derecho" MCS. For one thing, it is no where near as hot and the atmosphere as unstable. And the timing is all off, too.
We shall see.


OK, much too late for an entry. It was a long day ... I had a good multi-part gym workout, in particular a 5.6 mile jog and half mile / 33 lap swim ... and then I came home (shortly after 11PM or 12-1/2 hours after I left home) and made dinner.
I do want to note that there is much discussion of a possible severe weather outbreak or even multiple outbreaks across the D.C. area later this Thursday. I suggest you either go to the Sterling LWX National Weather Service website, or for more pithy, concise, media-like coverage, the Capital Weather Gang.
There is also flash flood watch out as well for the D.C. area for all day Thursday into Thursday night. 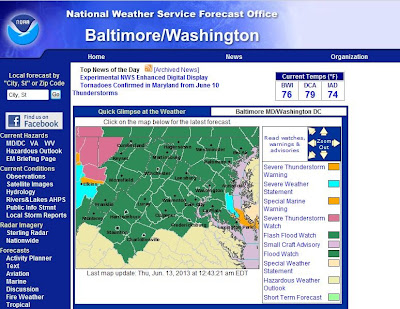 The weather advisories in effect for the Sterling (LWX) NWS county warning area (CWA) valid at 1243AM EDT June 13, 2013.
I can't tell the difference in the shading between a flood watch and flash flood watch. As it is, the D.C. area is under the latter rather than the former.
******* 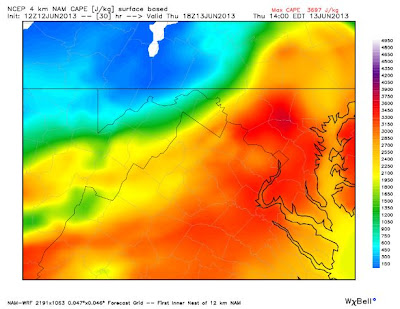 
I personally dislike the term "derecho" since that is more a description of the sensible weather -- a big, powerful, straight line wind that meets a particular set of criteria -- rather than what it really is -- a mesoscale convective system (MCS) or (if the MCS meets certain criteria) a mesoscale convective complex (MCC).

Above is the Storm Prediction Center (SPC) / NWS categorical outlook for severe weather issued at 6Z June 12, 2013 valid for Day 2 (June 13, 2013) showing our area in an unusual "moderate risk" of severe weather.

The moderate risk is about as high as we ever get -- and very unusual for a day 2 outlook. The "high risk" is typically reserved for the monster tornado outbreaks on the Great Plains in April and May.

Above is the just-released Day 1 outlook available from here (the link is regularly updated and will be valid in this way just today). As you can see, it still shows our area in a moderate risk.
Again, we shall see.


Oh, yes, I wanted to note this highly unusual Great Plains weather event the on Tuesday morning. It occurred over central Nebraska between 2AM and 6AM. It was a "heat burst" and it resulted in temperatures spiking as much as 26F -- reaching a ghastly 99F at Grand Island Regional Airport at 5:10AM before falling back down.

Central Nebraska ASOS and AWOS observations of temperatures and dew points before and after (during) heat burst, June 11, 2013.
*******


The heat burst occurs when a nighttime dissipating thunderstorm still has sinking air associated with it -- resulting in adiabatic compressional heating. Here is a discussion from the Hastings, Nebraska NWS site. The write-up doesn't use the word "adiabatic," but that's what this is. I found out about it from this CWG entry. 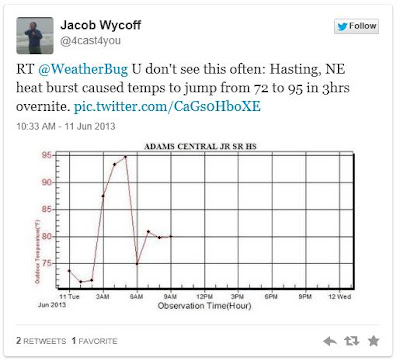 An image capture of a Tweet containing a temperature plot in the morning of June 11, 2013 at Adams Central High School in Hastings, Nebraska.
*******


OK, that's all for now. I my next entry will have to wait until tomorrow or Friday evening, although I may update this entry later Thursday.
--Regulus
Posted by Regulus at 1:51 AM