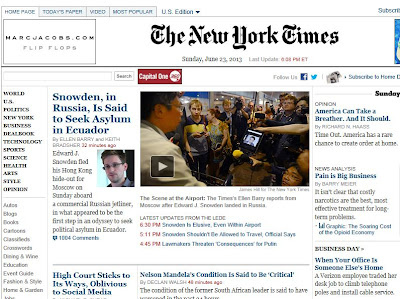 Well, whaddaya know: The Empire & Its Oligarchy failed to nab its current Public Enemy Number 1, Edward J. Snowden. The Empire & Its Oligarchy must be going crazy. They must be in a manic frenzy over at NSA in all the listening rooms. Ditto the other alphabet soup of agencies.*
*Yes, I borrowed that analogy from the inestimable movie North by Northwest. You should watch that movie. 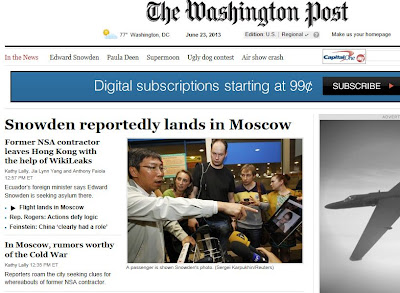 Apparently, Mr. Snowden got out of Hong Kong with little fuss (and certainly with a little help from Chinese and Russian officials) and is now "safely" in Moscow and possibly heading to another "democratic country" -- Ecuador is the leading contender -- although it seems to me he should just stay out in Russia for the time being since he is as the most of The Empire & Its Oligarchy's planet-spanning reach.
Now no one is saying Russia is a model of anything pure and good -- it's pretty awful, in fact -- but if you are fleeing the full might of the American Government, than that's probably the best place to go.
Why, just yesterday we had HuffPo headlines such as this: 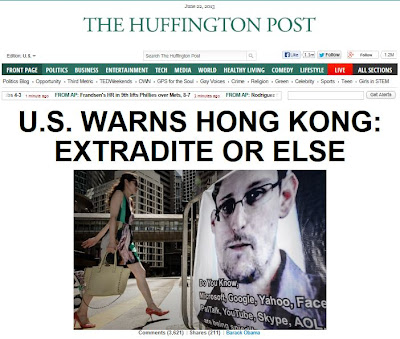 The American Government was demanding that Hong Kong turn over Snowden as quickly as possible -- or else (at least in media accounts). It had charged him with multiple felonies including espionage -- enough to keep in Bradley Manning-style solitary confinement and treatment for life.

Of course, it was never clear to me what that not "or else" was. That is, it was never clear what leverage the America has over China proper or its Blade Runner-eseque sci-fi dystopian city-state of Hong Kong.
When I first wrote this entry yesterday, I suggested that maybe the "or else" would be in the form of American drones taking out Walmart supply chain lines in China. Oh, wait, that wouldn't work. 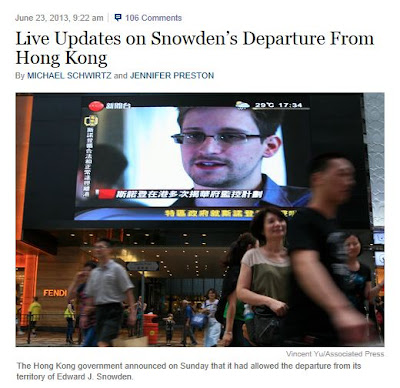 Or maybe the "or else" would be in the form of undoing all that Free Trade fetishizing that has destroyed the American worker and economy and helped to create a hereditary oligarchy in America. Oh, scratch that, too. 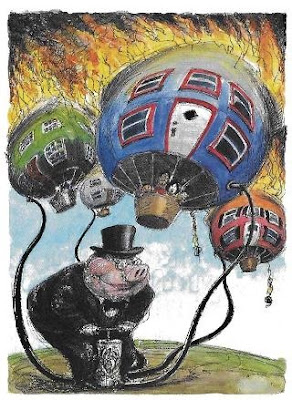 My other idea was for The Empire & Its Oligarchy to blow financial asset bubbles China's way until they pop. Robert Rubin, Lloyd Blankfein, and Jamie Dimon could all go with their CDO's, CDS's, and other financial "instruments" (and later cash out with taxpayer trillions in bailouts for their "top talent").


And Sebastian Mallaby could go too an pen forceful editorials about why this is the Best Of All Possible Worlds. And Ruth "Mother" Marcus would be STOPPED COLD if anyone dared suggest otherwise.
But none of that is necessary now since Snowden fled to Russia, and Russia doesn't give a sh!t about upsetting the U.S. In fact, it welcomes it. And to hear U.S. Senators talk about how they're going to "punish" Russia, Putin in particular, is just funny. 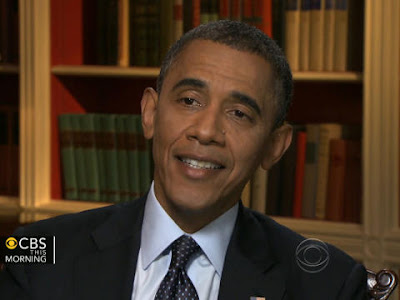 Meanwhile, back President Obama himself -- eyes glazed over in a strange way -- continues to insist that all Americans praise and thank the Military / Industrial / Surveillance Complex in all its forms and activities.
To that end, did you know that The Empire & Its Oligarchy NEVER makes a mistake and ONLY uses its awesome powers for good? Or at least since 1993. 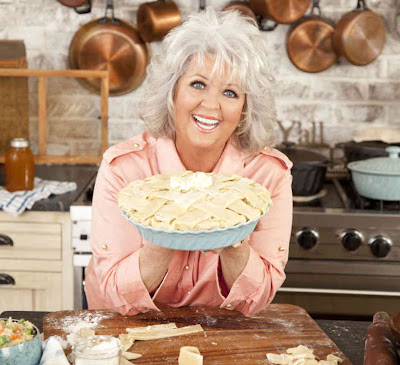 Speaking of The Empire (and putting aside Its Oligarchy and instead focusing on its internal cultural machinations), the whole Paula Deen matter -- that weird and slightly scary women got herself basically fired from the Food Network because of her latest bit of "Southern peculiarity" -- has been quite fascinating. 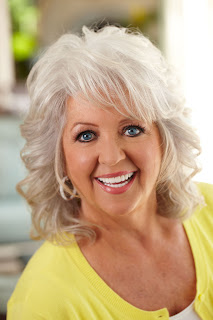 I suggest reading this piece in the Christian Science Monitor: Paula Deen and the N-word: A plate of bigotry with that fried chicken?  The article sub-headline states: "Paula Deen, the woman who has put Southern culture on a pedestal, may be responsible for raising deeper questions about whether the marketing of Southern cuisine comes with a side of bigotry."
I actually think the whole cashing in on her Type 2 diabetes diagnosis episode in January 2012 was worse, especially since her latest controversy was actually something taken from a court deposition. 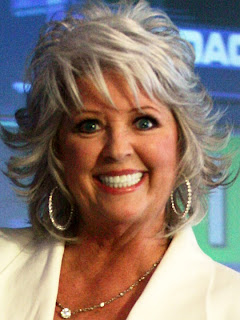 Whether attributable or not to the Southern diet of fried, buttery, and sugary foods in dangerous sizes that she brazenly peddles, Type 2 diabetes certainly is linked to America's obesity epidemic. In addition, she waited until she had a lucrative deal lined up before announcing her illness -- and saw nothing wrong with this.
In my view, this is what makes her a really crummy person -- not the fact that a 66 year old woman from the Deep South used the "N-word" at points in her life.

But I realize that from a certain inverted Marxist libertarian perspective, generating income IS the highest good and therefore her acts WERE the MOST moral.

Anyway, the decision by the Food Network is not going over well with her fan base, which judging by the comments on the networks' Facebook page, is overloaded with angry Southerners and/or Tea Party types.  Why am I not surprised?

Returning to The Empire & Its Oligarchy ... 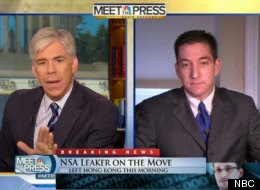 Oh, yes, watch this exchange between David "Stretch" Gregory and Glenn Greenwald on Meet the Whore. Gregory -- who is far more comfortable in his weekly group grope session with Lindsey Graham (R - Gay) -- "asks" Greenwald why he should not also be charged for having "aided and abetted" Snowden in espionage. Greenwald's response sums it up well.
Greenwald replied in part: "I think it's pretty extraordinary that anybody who would call themselves a journalist would publicly muse about whether or not other journalists should be charged with felonies. The assumption in your question, David, is completely without evidence, the idea that I've aided and abetted him in anyway ... If you want to embrace that theory, it means that every investigative journalist in the United States who works with their sources, who receives classified information is a criminal."

Greenwald tweeted this later.
Gregory and his cohort Chuck Todd are collectively everything wrong with American journalism. They are the lap dog and mediawhores of The Empire & Oligarchy. 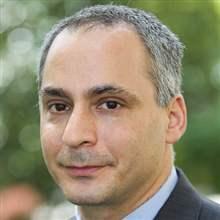 I wonder if the oh-so-sensitive Benjamin Wittes (R - Monica's Dress / The Empire & Its Oligarchy) has caused him to change his "policy" whereby he refuses to "debate" Glenn Greenwald because of the mean things he said about him.
I would try to find out by reading Wittes' legal blog, except I don't care enough to do so.

Look, I understand that the question is a bit more subtle than that the U.S. Government's Total Spying regime is bad. 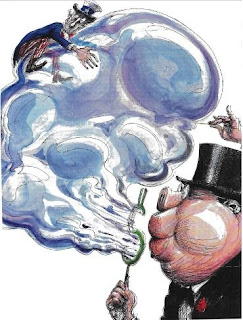 The question, I suppose, is whether or not you view terrorism as an existential threat to America, and that THEREFORE anything and everything is justifiable, ALL THE MORE SO if you have the technology to do it. And furthermore, the point is made that all this surveilling merely seeks out terrorist threats rather than enforcing an ideology.

In short, it's practical / noticeable effect is minimal.
However, I see a deeper issue toward a creeping corporate fascism in a country whose system is deeply corrupted and dysfunctional -- and ruining what had been a very good society.

OK, enuf of that.

My intention is to post an update discussing my Saturday night with Damon G. and Sunday visiting Wendy and Tacoma and taking a bicycle ride. I will try to do so Monday night / early Tuesday.