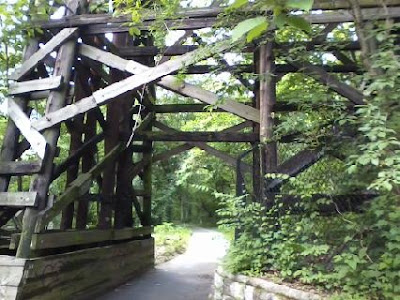 
This is just an abbreviated update, only a small part of what I initially wrote.
I'll try to post an update on Tuesday night. I had intended to post a full entry tonight, but it's just too late. Also, the topic about which I wanted to write -- Edward J. Snowden and his actions and the American Government's (and Official Washington's) reaction(s) -- is somewhat sensitive and I don't want to delve into that now. There is too much to write about and my own feelings are hard to state without sounding really angry and incendiary, and I don't want that. It may be that I just have to censor myself on this topic for a few important reasons. 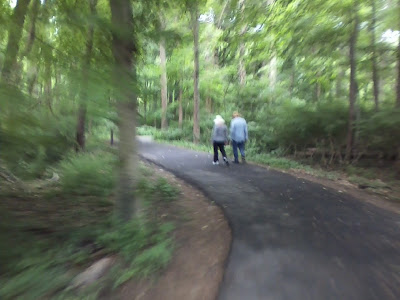 
Updated 901AM 6/11/2013: However, I will say this: I think Snowden is highly courageous and has done a terrific service, as has Glenn Greenwald, in showing what a dystopian reality we have entered with NSA and the larger corporatized surveillance / police / military state spy on everything at all time. But the Empire with its top 0.1% oligarchical over-class values is livid, enraged, not to mention frenetic that its workings have been brazenly exposed, and it wants vengeance. Snowden may expect even worse that the psychological and psycho-sexual torture meted endlessly upon Bradley Manning.
And Official Washington -- showing how phony is the corporate media entertainment complex-enforced red/blue split when it comes to this surveillance / police / military state reality -- will only cheer this along, facilitated by a useless corporate media. And to that question posed, astonishingly (given its role in Official Washington) in a piece in The Washington Post online: Has the US become the type of nation from which you have to seek asylum? In this case, given what awaits Snowden, the question answers itself. If we're lucky, though, maybe Obama will give a really good speech. 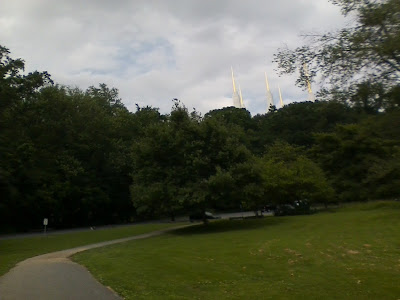 
So instead, let me just note that I made my "maiden voyage" bike ride taken on Sunday after I purchased a used but in very good condition bicycle from my top boss, or rather, her husband, who met me at Grosvenor Park Metro and then drove me over to Beach Drive / Rock Creek Park off Strathmore Avenue. I then rode back home over the next two hours on a circuitous route, getting the feel for the bicycle, stopping at an outdoor market / eatery on Connecticut Avenue right next to Comet Ping Pong.
I probably rode about 12 miles or so. Oh, and the bicycle has NOT yet been stolen. 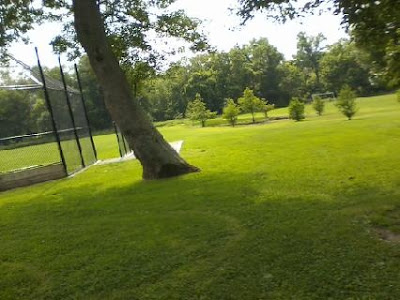 An area called Rays Meadow near East-West Highway in Silver Spring or maybe Chevy Chase (there really aren't clear boundaries on some of these areas except for postal "Zip" codes), 3:38PM June 9, 2013.
*******


As for Monday, I had a regular work day and a full gym workout including 5 miles of jogging on a 3 to 5 percent incline (total elevation gain was 965 feet over 55 minutes), weight-lifting, and swimming 33 laps or just a tad over half a mile. 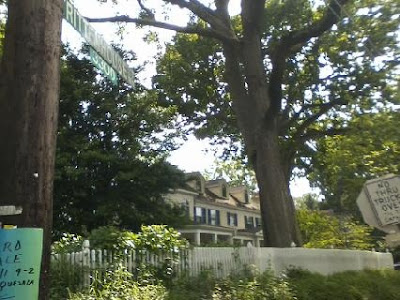 A large house with a towering oak tree at the corner of Rittenhouse and 33rd Streets NW, Washington, D.C., 4:03PM June 9, 2013. This is in far upper Northwest D.C. in an area of the city called Chevy Chase in the three-syllable alphabet (here three syllable "R"). It is near the Maryland / Montgomery County / Chevy Chase border.
*******


Someone stole my umbrella at the YMCA, which kind of pissed me off, except it was "my fault" for leaving it in the open in the locker room where you can hang coats. I also left my jacket there but it is old and was drenched, so no one stole it. Also, I found that umbrella on the Metro recently, so I guess this is part of the Circle of Life. 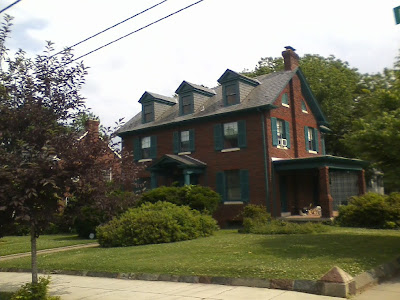 Two blocks farther south at the corner of Patterson (three syllable "P") and 33rd Streets NW, Washington, D.C., is this lovely looking house with its pretty residential setting. A house in D.C. such as this easily goes for $2.5 million. This was at 4:04PM June 9, 2013.
The three syllable Q street is Quesada Street NW.
*******


As for the umbrella, it was very needed. We had a tremendous deluge of rain today (or rather, on Monday). National Airport (KDCA) actually had approximately 2.8 inches of precip. (I don't have the final numbers), enough not only to put June into surplus for the full month by the 10th but also for the year. This would appear to be the first yearly surplus since December 31, 2011. It also felt like a rainforest in terms of humidity and wetness.
It appears as though KBWI had about 1.80" and KIAD had "only" about an inch. KDCA clearly had the jackpot. 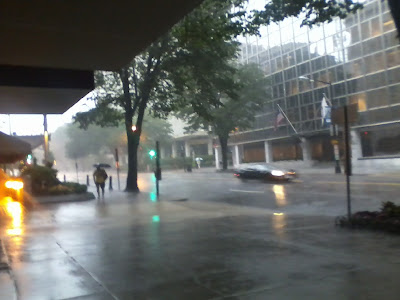 Torrential downpour as seen along 17th Street by the Mayflower Hotel, 7:10PM June 10, 2013. I was walking to the gym -- my computer wrapped in two large plastic bags and instead my bookbag, touted on my back but under my jacket and under an umbrella. The computer stayed dry. Little else did.
*******


I'll post the final numbers in an update to this entry. Actually, here are the numbers (even before I post this entry): 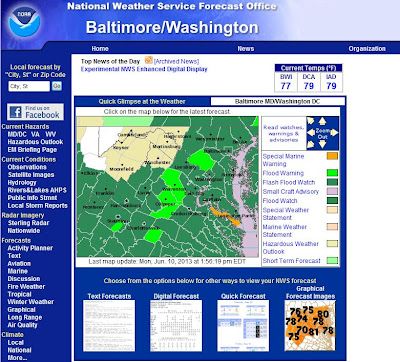 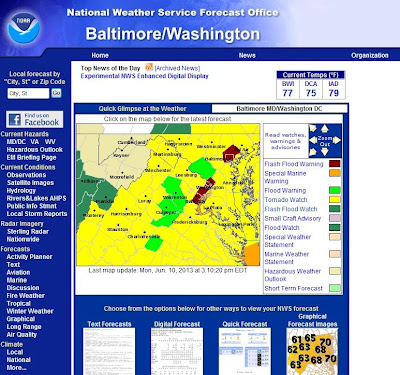 The Sterling LWX county warning area (CWA) advisories as of 3:10PM June 10, 2013 showing now a tornado watch in effect for the region, not to mention two separate flash flood warnings (the dark crimson) in effect for the District of Columbia and Baltimore City and the nearby suburbs of both on a SW-NE line. The tornado watch was mostly a precautionary move though there were a couple radar suggested tornadic storms.
******* 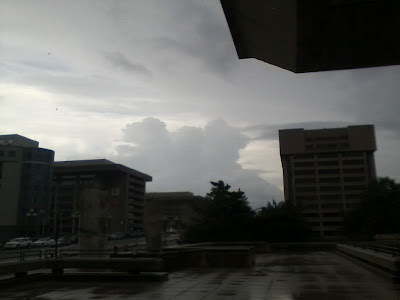 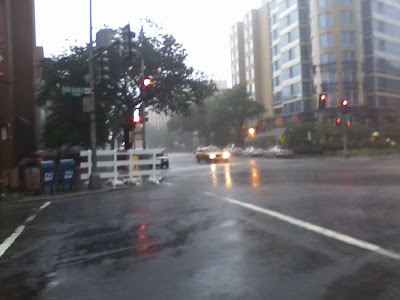 
OK, that's all for now, except I promised Chris T. that I would post two more Alabama pictures he sent me that he took over the weekend. So without further ado ... 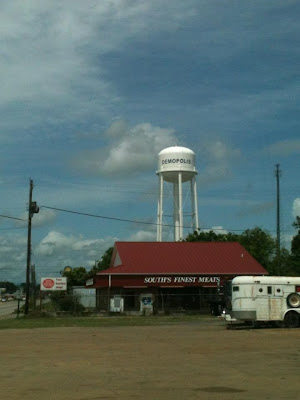 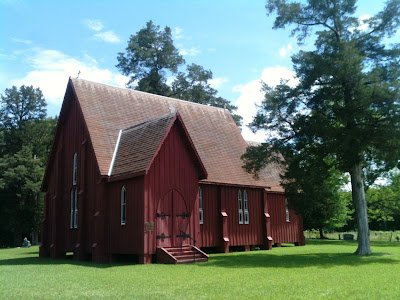