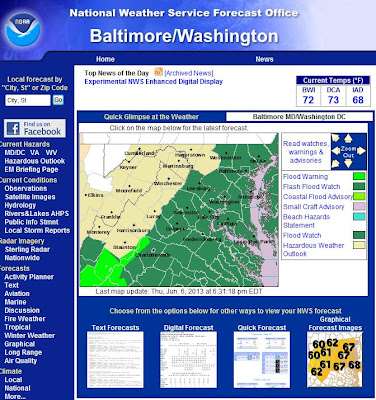 The Sterling NWS (LWX) county warning area (CWA) advisories as of 6:31PM EDT June 6, 2013. There are both flood watch and flash flood watches in effect, although the green colors look identical to me.
The immediate D.C. area is in a flash flodo watch for 2 to 4 inches of rain in the next 36 to 48 hours with localized amounts of 6 inches, except at KDCA where 1.2 inches will fall IF WE'RE LUCKY.
*******


I was going to take the computer home tonight but it looks like it is going to be rainy tonight and VERY rainy tomorrow morning. In addition, I may meet some folks over at the Kennedy Center this evening, and so it's probably best if I am not toting it around with me in my backpack. 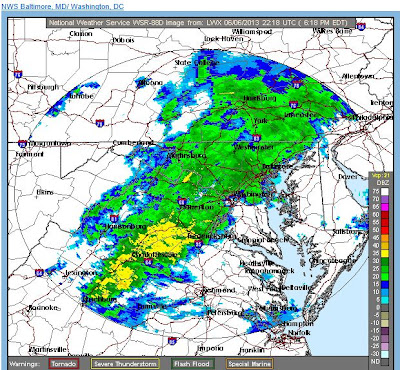 The LWX NWS radar in standard / base mode reflectivity ast 6:18PM EDT June 6, 2013. The rainfall over central Virginia is filling in and approaching. It has been raining all afternoon in the Blue Ridge and Alleghenies and over the Potomac Highlands.
*******


The approaching rain is from Tropical Storm Andrea, the first named tropical cyclone of the season in the Atlantic basin -- actually, it formed in the eastern Gulf of Mexico. T.S. Andrea at the 5PM update was centered about 35 miles NNW of Cedera Key, meaning it is ashore along the "Big Bend" area of the Florida Gulf coast. 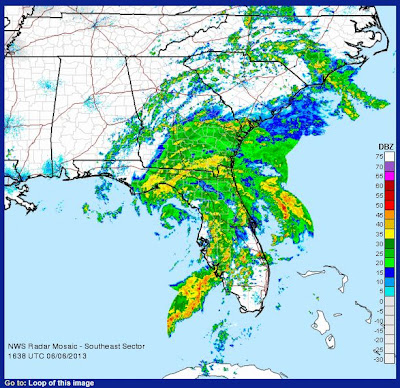 A still frame of the Southeastern U.S. radar mosaic at 1638UTC (12:38PM EDT) showing Tropical Storm Andrea's precipitation spirals over Florida with the center located about 100 miles ESE of the mouth of the Suwannee River.
*******


The storm's circulation / hyrbid remnants is forecasted to track NNE up the Eastern Seaboard while interacting with a frontal boundary and transitioning to a hybrid system. 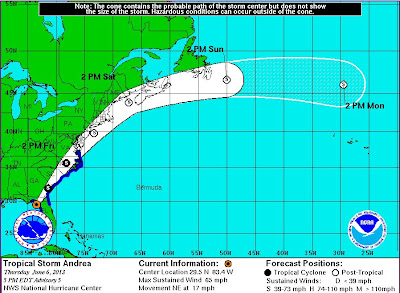 The National Hurricane Center's 5PM EDT June 6, 2013 update (advisory #5) showing the location and forecasted track of Tropical Storm Andrea. The track takes it right over the Tidewater area, although the 18Z model runs -- especially the NAM HI-RES -- had the heaviest precipitation along and just west of the Chesapeake Bay including the D.C. and Baltimore Metro areas.
******* 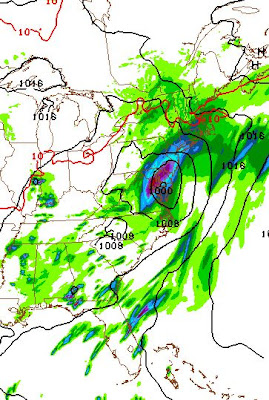 This has a resolution of about 4km, which is much higher than the regular NAM.


Of note, Andrea actually appears to have genuine tropical characteristics -- as opposed to some of the wholly extratropical storms or even just small blobs of thunderstorms that NHC sometimes dubs tropical systems, even while refusing to issue advisories for a biggie (i.e., Sandy) because it was supposed to turn hybrid or extratropical, and thus allowed some legalistic / bureaucratic distinction to take precedence while the storm was bearing down on 30 million people. 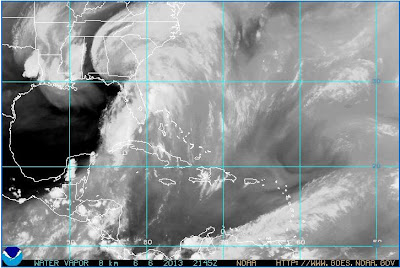 NOAA GOES East - Atlantic Hurricane Sector water vapor satellite image from 2145Z (5:45PM EDT) June 6, 2013. I would have used a visible image but already the daylight was draining away and the image wasn't so good.
Of note, here was the message on the NOAA GOES website today:
The planned GOES-13 return to GOES-East operations scheduled for today, June 6, 2013 at 1534 UTC, has been POSTPONED due to a Critical Weather Day and Tropical Storm Andrea. The transition will be rescheduled for a date yet to be determined, but no sooner than Monday, June 10, 2013. More information: http://www.ssd.noaa.gov/PS/SATS/messages.html.
We really do need some new satellites up there.
******* 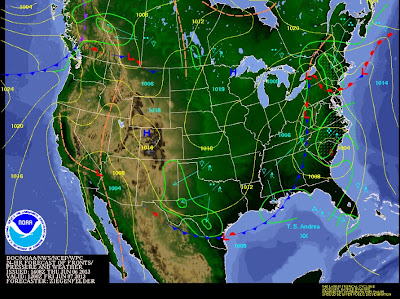 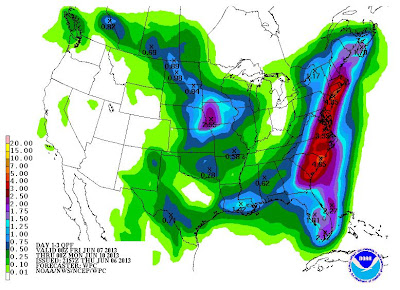 
OK, that's all for now. There were other things I wanted to write and post but I need to head out now, though at this point, I've probably missed everything. I intend to post a Friday night musical interlude tomorrow.
--Regulus
Posted by Regulus at 7:23 PM