*With apologies to Madeleine L'Engle. 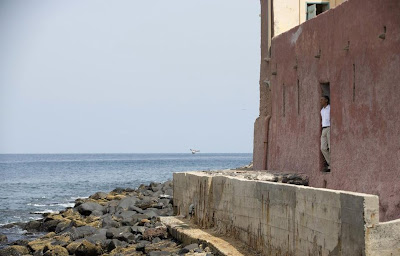 I had to post this amazing picture of President Obama at the fabled and perhaps itself  mostly allegorical (but still symbolically powerful) "Door of No Return" for African slaves in the "House of Slaves" on Gorée Island in Dakar, Senegal today, June 27, 2013. Click on image for larger version.

For President Obama to be there sort of completes in a way one chapter of an half-millennium long episode of agonizing human history that starts withh the horror of the Middle Passage in the Atlantic slave trade.
He visited the spot today at the start of his 8-day trip to Africa that will take him to South Africa, where a very ailing Nelson Mandela may not have much time to live, and then Tanzania. 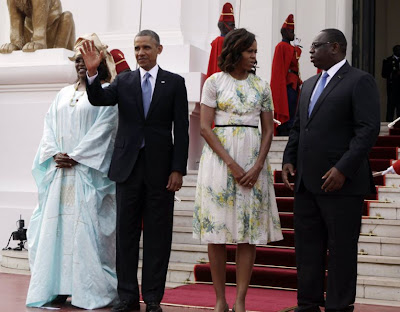 
Yes, there are real questions / controversy about how many slaves actually passed through the island -- much less the door itself -- compared to the overall African slave trade of an estimated 10 to 12 million sold into slavery from approximately the 15th to 19th Centuries, but in some sense, the point is moot. It's a symbolic site if not actual. 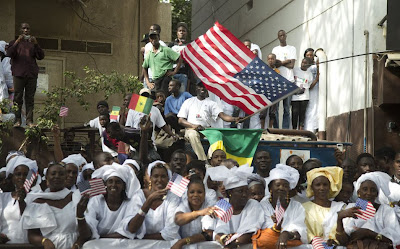 A crowd dressed in formal but comfortable looking attire gathered along the presidential motorcade route in Dakar, Senegal before President Obama on his visit to Senegalese President Macky Sall, June 27, 2013.
*******


I'm posting this at nearly 8PM. I'm not sure whether to go to the gym tonight or not. If I don't, I'll instead do my other default activity: Go a bar (maybe No. 9 or Larry's Lounge). I still want to post a some pictures from last weekend, which I may do later. I'm watching a Maude rerun as I post this. It's weird how many particular images from this show reappeared in The Golden Girls but in a totally different context. 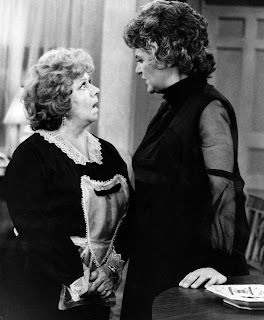 Mrs. Naugatuck: "I've read the Bible from cover to cover."

Mrs. Naugatuck (in thick Cockney accent): "The first words in the Bible are 'Do not remove from this motel.'"