A Supremely Good Day for All Gay and Lesbian Americans 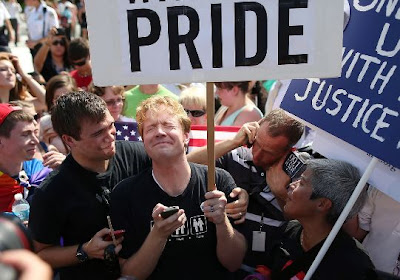 
Today, June 26th, 2013, the United States Supreme Court handed down two major rulings -- both 5 to 4 but with different narrow majorities -- that greatly bolstered the standing of same sex marriage and lesbian and gay rights in America. In short, it was a very good day for gay and lesbian Americans -- and to the extent it by extends basic equality before the law and dignity, a good day for all Americans (even right-wing crazy ones, of which there are no shortage).
The first ruling declared the offensively named and ugly  Defense of Marriage Act (DOMA) unconstitutional and the second let stand on a technical ground stand lower court rulings that voided California's Proposition 8. 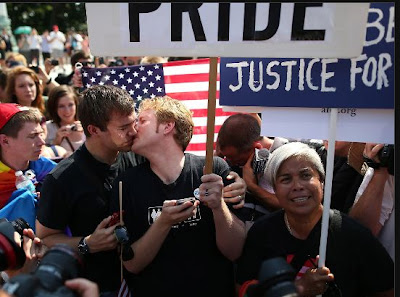 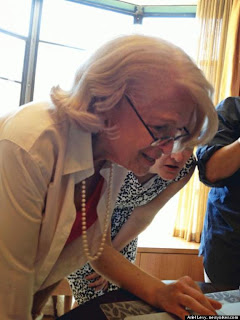 The "Windsor" is Edith Windsor, the widow of Thea Spyer, whose death in 2009 initiated what would become the case decided today. She is pictured at left at the moment she was made aware of the decision. (Despite the name of the case, the Obama administration ceased formally legally defending the law in February 2011.)

The majority and dissenting minority opinions are here. The minority opinion includes much foaming at the mouth by Tony "Three Fingers" Scalia, whose bilious vitriol and hate is the actual basis of his "strict constructionism" (which is mostly a sham in that "strict constructionism" is EITHER what Scalia says it is (his "fundamentalist" interpretation of the Founders' "intent") OR (if the case and justice appear to be going the other way) he declares that intent is unknowable.
Needless to say, corporate legal stooge Wall-P has always been DEEPLY impressed with Scalia. 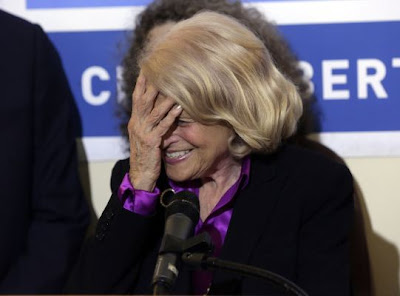 Edith Windsor reacts with joy at a press conference in New York City after the Supreme Court rulings, June 26, 2013.
*******


The Proposition 8 case -- known as Hollingsworth et al. v. Perry et al. -- was a bit more convoluted in terms of why the Court ruled as it did. Specifically, the Court ruled that it did NOT have the authority to take a stand on California's Proposition 8 -- precisely because the State of California declined to appeal a trial court's decision against it. 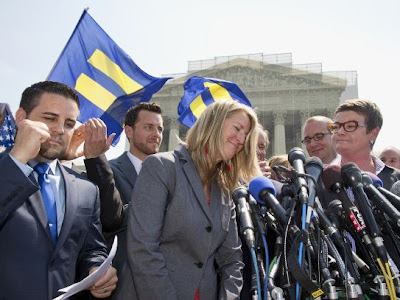 The plaintiffs including Sandy Stier (center) and her partner Kris Perry (right) as well as fellow plaintiff Jeff Zarrillo outside the U.S. Supreme Court after the decisions were announced, June 26, 2013. The other plaintiff (not pictured here) is  Zarrillo's partner, Paul Katami.
*******


The second ruling was a technicality concerning whether or not the Court had the authority to take a stand on California's Proposition 8. Earlier lower courts have ruled against the ballot initiative. As The New York Times reports:
"The case concerning California’s ban on same-sex marriage, enacted in a ballot initiative known as Proposition 8, was decided on technical grounds, with the majority saying that it was not properly before the court. Because officials in California had declined to appeal a trial court’s decision against them, and because the proponents of the ban were not entitled to step into the state’s shoes to appeal the decision, the court said, it was powerless to issue a decision. That left in place a trial court victory for two same-sex couples who had sought to marry."
The 5-4 alignment here was unusual with Chief Justice Roberts and the  Scalia joining three of the Court's four liberals (see below). 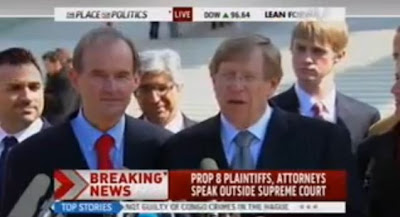 David Boies (left) and Ted Olson (right) speak outside the Supreme Court following the rulings on DOMA and Proposition 8, Washington, D.C., June 26, 2013. (The fellow on the far left is the other Prop 8 plaintiff, Paul Katami.)
By the way, it is necessary great work done in this case by the unlikely superstar legal duo of Theodore (Ted) Olson and David Boies (on opposite sides the greatest American legal travesty of the past half century, Bush v. Gore). A very impressive figure, Olson is the former Solicitor General of the United States (and his wife, Barbara, a leading figure during the GOP Clinton Wars of the 1990s, was killed in the 9/11 attacks).
******* 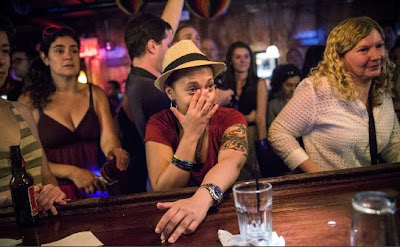 Richelle Spanover wipes tears of joy from her eyes as she hears the Supreme Court rulings on DOMA and Proposition 8 while seated at the Stonewall Inn in the West Village neighborhood of New York City, June 26, 2013.
Yes, that's THE Stonewall Inn of 1969 fame (although the building itself is different).
*******


Interestingly, the Court's Lawrence v. Texas decisionwas handed down exactly 10 years ago today --  on June 26, 2003 -- and Scalia's legendary dissent in there, so full of sociopathic rage and hate with creepy references to all kinds of perverted sex acts actually also contains the prescient statement as a logical follow-through to that ruling, "...what justification could there possibly be for denying the benefits of marriage to homosexual couples ..."
Rachel Maddow noted this on her show tonight. 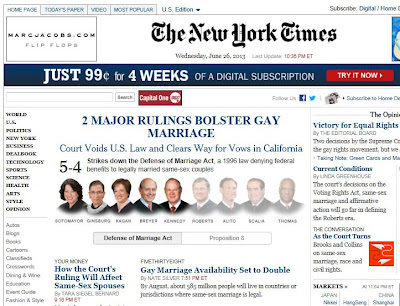 The DOMA 5-4 decision had in the majority Justices Sotomayor, Ginsburg, Kagan, Breyer, and Kennedy. This is a screenshot of the New York Times online around 1135PM June 26, 2013. 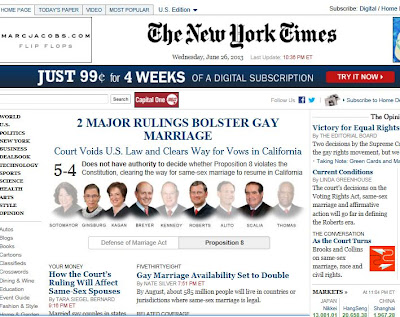 Owing to its oddly technical nature, the Proposition 8 decision had in the majority Chief Justice Roberts and Justices Ginsburg, Kagan, Breyer, and Scalia. This is a screenshot of the New York Times online around 1135PM June 26, 2013.
*******


DOMA was passed and signed into law in 1996 during the heady Clinton years (and that was always a major stain on his socially progressive pedigree and record). Justice Kennedy joined the "liberal" side of the court on this one and the language is nothing less than inspirational including (with a particularly wonderful passage quoted here at length):
"DOMA's principal effect is to identify a subset of state sanctioned marriages and make them unequal. The principal purpose is to impose inequality, not for other reasons like governmental efficiency. Responsibilities, as well as rights, enhance the dignity and integrity of the person. And DOMA contrives to deprive some couples married under the laws of their State, but not other couples, ofboth rights and responsibilities. By creating two contradictory marriage regimes within the same State, DOMA forces same-sex couples to live as married for the purpose of state law but unmarried for the purpose of federal law, thus diminishing the stability and predictability of basic personal relations the State has found it proper to acknowledge and protect. By this dynamic DOMA undermines both the public and private significance of state sanctioned same-sex marriages; for it tells those couples,and all the world, that their otherwise valid marriagesare unworthy of federal recognition. This places same-sex couples in an unstable position of being in a second-tier marriage. The differentiation demeans the couple, whose moral and sexual choices the Constitution protects, see Lawrence, 539 U. S. 558, and whose relationship the State has sought to dignify. And it humiliates tens of thousands of children now being raised by same-sex couples. The law in question makes it even more difficult for the children to understand the integrity and closeness of their own family and its concord with other families in their community and in their daily lives. Under DOMA, same-sex married couples have their lives burdened, by reason of government decree, in visible and public ways. By its great reach, DOMA touches many aspects of married and family life, from the mundane to the profound. It prevents same-sex married couples from obtaining government healthcare benefits they would otherwise receive. See 5 U. S. C. §§8901(5), 8905. It deprives them of the Bankruptcy Code’s special protections for domestic-support obligations. See 11 U. S. C. §§101(14A), 507(a)(1)(A), 523(a)(5), 523(a)(15). It forces them to follow a complicated procedure to file their state and federal taxes jointly. Technical Bulletin TB–55, 2010 Vt. Tax LEXIS 6 (Oct. 7, 2010); Brief for Federalism Scholars as Amici Curiae 34. It prohibits them from being buried together in veterans' cemeteries. National Cemetery Administration Directive 3210/1, p. 37 (June 4, 2008)."
As Martin Luther King Jr. said in a very different time and place and far deeper struggle, "The arc of the moral universe is long, but it bends toward justice." 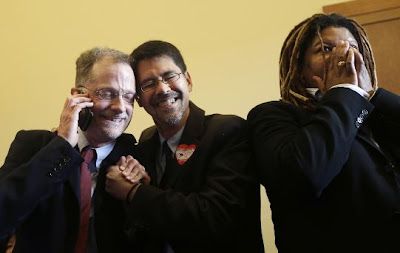 (Huffington Post caption): John Lewis, left, and his partner Stuart Gaffney embrace as they react next to Andrea Shorter after the Supreme Court decision at the office of San Francisco Mayor Ed Lee at City Hall in San Francisco, Wednesday, June 26, 2013.
*******


Now this is just another episode the never-ending American cultural wars and efforts to "make a more perfect Union." Same sex marriage and the attendat basic human dignity and decency remains illegal in most states, and the battle goes on. All in all, though, today was a good day. 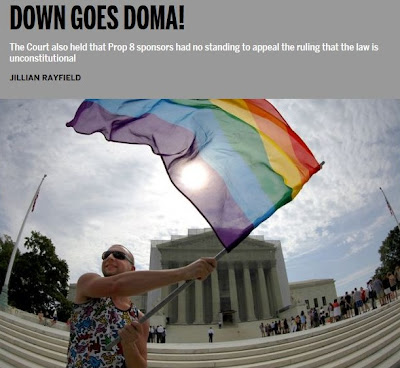 A fun image and headline from Salon.com shortly after the Supreme Court decisions were announced.
*******


OK, this is the second entry this week where I didn't post a planned personal update. I do want to note that I had a really good gym workout on both Monday and Wednesday nights after work (where I'm quite busy), and that my weight tonight dipped to 149.5 pounds while in my bathing trunks on the big scale just before going into the swimming pool. I'm quite near by weight goal (though not muscle gain versus some additional fat loss). (Yes, I'm still eating just fine. Remember that I gained about 50 pounds of fat over 7 years and now I've lost about 35 of them, but I am also 43 years old.) I'll try to update this blog tomorrow (Thursday) night though it may not be until Friday.
--Regulus
Posted by Regulus at 11:54 PM