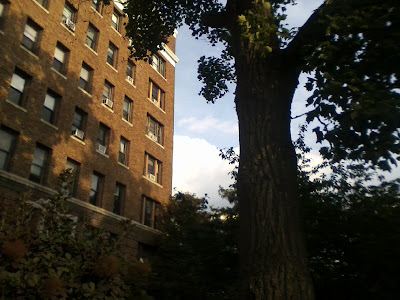 
Well, I had intended a fuller entry but this is day featured one of my usual night time extended gym visits after work followed by shopping, 11PM arrival time at home, cooking dinner, and settling in even while watching my regular TV sitcom reruns. As a result, it is nearly 1AM as I start this entry. 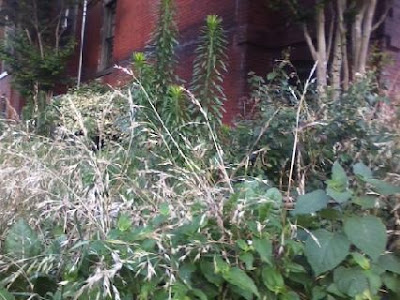 Weeds growing in the small yard of the Miramar along 15th Street between Rhode Island and Massachusetts Avenues NW, Washington, D.C., 8:08PM June 18, 2013. This is the same plot where grew early last month a little dandelion.
*******


I had a very good gym workout tonight including a 5.51 mile jog over 61 minutes (actually, 55 minutes plus 5 minute cool down plus an extra minute to reach 5.50 miles and 800 calories); an hour of mostly light but steady weight-lifting on the machines; and 37 lengths of the pool (either 37 laps or 18-1/2 laps, depending on how that is reckoned). 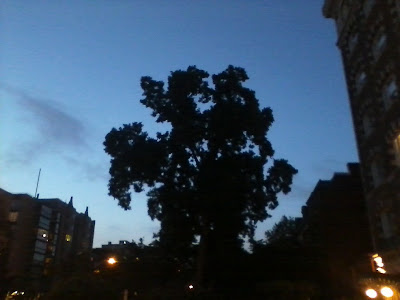 
Alas, we didn't get a sufficiently good dousing of rain (only about 1/4" at KDCA) on Tuesday in order to keep us definitively into yearly surplus (where KDCA has been since June 10th), and now there is no real chance of showers for the next week even as it gets summery warm to hot (85F to 90F for highs this weekend). 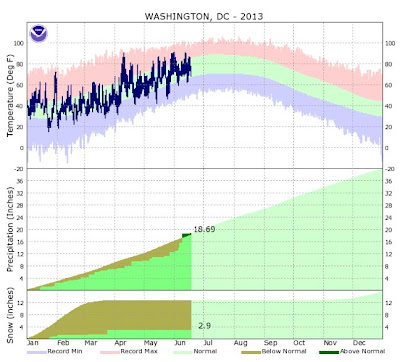 The KDCA climograph for 2013 through June 18, 2013 showing color-coded temperatures, precipitation, and snowfall amounts and anomalies.
*******


On Tuesday evening, I did not go to the gym but instead did a post-work bar crawl, of a sort. I got off the Metro at McPherson Square and first went to the Post Pub (so named for its proximity to The WaHoPo building where Fred Hiatt daily waves the flag of corporate oligarchy and empire, though he's merely doing the Graham Family's bidding). 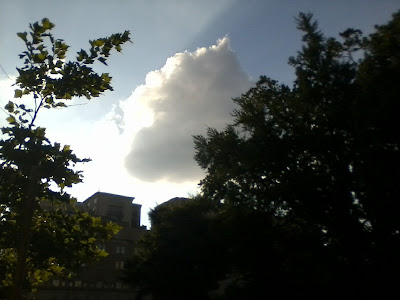 A single puffy cumulus cloud in the sky as seen from the corner of Farragut Square in downtown Washington, D.C., 6:33PM June 19, 2013. This was earlier Wednesday when was walking to the YMCA gym from work rather than last night.
*******


Thereafter on Tuesday evening, I stopped in at No. 9 for bit and then walked over to Larry's Lounge, although by that point after 4 drinks I was kinda drunk (not having eaten dinner). Oh, yes, I also stopped at the Safeway and bought a few items that I put in my book bag. Instead of another drink, I had two cups of coffee and then went home, although (and in keeping with what was the SECOND reference to the word "Baileys" on Tuesday evening and in this entry -- see below for the FIRST reference) the bartender unprompted put a shot of Baileys Irish Cream in my second cup of coffee. 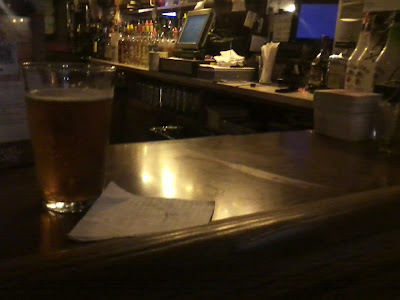 
Anyway, it was while at Post Pub that I spoke to a fellow named Pete (or Peter) who was in town on business from Wisconsin. Pete not only was from Wisconsin, but he had been fishing on Lake Nipigon (which I mentioned in my previous entry); visited nearby Thunder Bay; and has also been to Baileys Harbor, Wisconsin.
Baileys Harbor is a small town of approx. 1,000 people on the Door Peninsula of Wisconsin. It and a larger surrounding Census Designated Place is located on a tiny rounded inlet along Lake Michigan. I'm intrigued by the place. There is also a lighthouse nearby on the opposite side of the inlet. 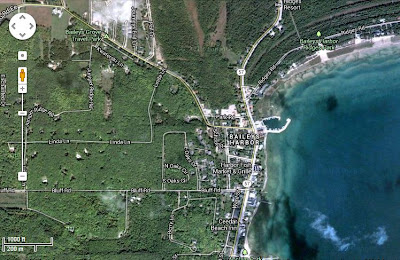 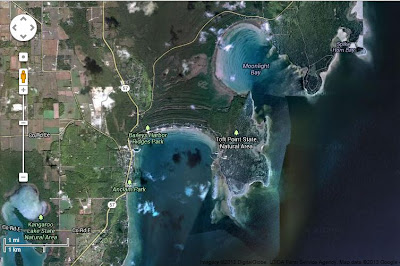 Google maps satellite view of Baileys Harbor and nearby Moonlight Bay, Wisconsin. Moonlight Bay is, of course, the name of a lovely little love ditty.
******* 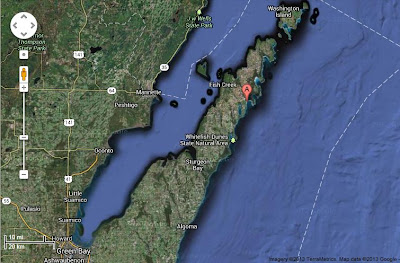 A broader Google maps satellite view showing the entire Door Peninsula of Wisconsin as well as Green Bay on the west side and the City of Green Bay at the base of the bay. Baileys Harbor is where the "A" is located.
******


While walking home down V Street and crossing 16th Street NW, I saw the tip of the Washington Monument. As I've mentioned, it is encased in scaffolding for repairs from earthquake damage that occurred in Aug. 2011. 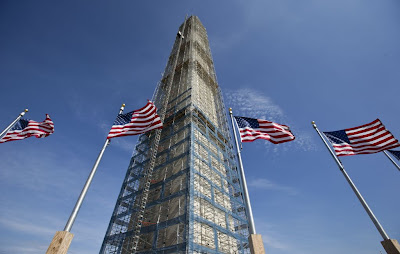 The Washington Monument encased in scaffolding and with a decorative green "scrim" being added, as seen earlier this month.
*******


However, I was wrong about the Monument being encased in a second layer of scaffolding. In fact, the scaffolding structure was completed in May 2013 ahead of repair to the stones. But what I thought was a second layer is actually a sort of thick green "scrim" of material that is basically decorative in nature and is meant to create a sense of a large green-fringed grid. I think this is sort of how it was in 1999 - 2000, and indeed some of the subcontractors involved in this $15 million repair on the same as then. 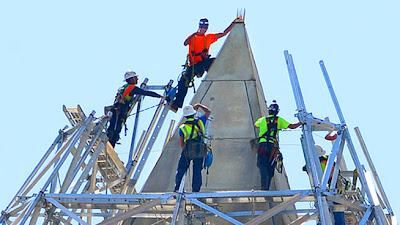 A close-up of workers completing the scaffolding framework near the very tip of the Washington Monument, May 15, 2013. One of the workers is doing something very few human beings ever have the chance to do -- touch the aluminum capstone (surrounded by a jaggedly spiked lightning rod) on which is inscribed on the east side the words "Laus Deo."
*******


Anyway, I noticed that there were FOUR navigation lights flashing on the north facing side, and doing so fully out-of-phase. There are four pairs of lights -- two on each side -- and since February 1995, all have blinked in sharp unison (prior to that, they winked gently out of phase). 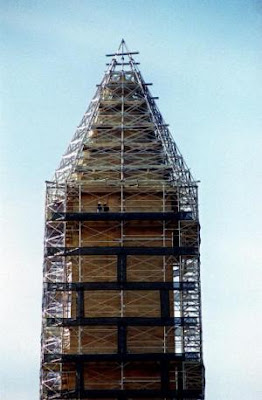 This is an image of the scaffolding back in 1999. It is quite similar to what is being installed now.

What I'm not sure is whether the two extra pairs of lights was created by a reflection off the skeletal lattice of scaffolding by the regular lights (they were out of phase, so that cannot be) or if (as seems to be the case)  temporary ones were added.


I (think) I recall that in 1999-2000 there were temporary lights on the exterior in front of the regular ones.
In short, I wasn't able to see if the extra lights were flashing tonight and I don't know if they are temporary (I assume so).
At some point, though, the incandescent-style lights that make up the red navigation lights are going to be replaced by LEDs and that will look weird.
*******


OK, I think that's all for now.  I had wanted to write about two more topics. 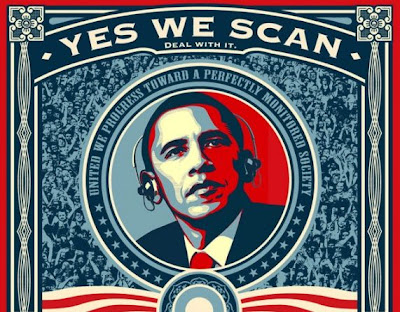 First, I was going to write a little more including President Obama's defense of the widespread, systemic, wholesale spying on every American that NSA and the U.S. Government have undertook in the name of protecting everyone from an ever-metastasizing, ever-expanding, everything-is-justified, existential threat called "terrorism" (defined in whatever way the Empire and its profit-driven media information / entertainment complex need). And I wanted to mention the total wussiness of Senate Democrats on this but that's a given. 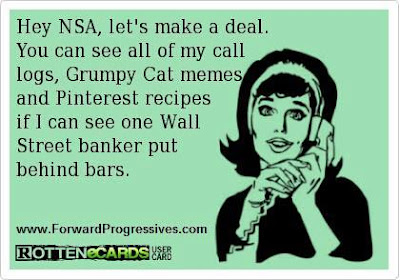 I was disappointed but not surprised to see some of the liberal blogsophere -- including Bartcop -- swinging reflectively to Obama's defense on this matter, completely at odds with how he (appropriately) handled the Bush / Cheney cabal on this matter. 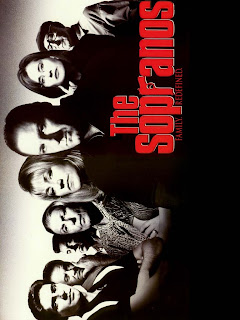 Secondly, I also wanted to mention about actor James Gandolfini's unexpected death yesterday at 51 (possibly from a heart attack).  His death allowed CNN to have wall-to-wall coverage -- and excuses to show all those hyper-violent scenes from that awful series. However, I just wanted to say that I strongly diuliked The Sopranos and watched it only once.


The way it works in America is you're supposed to be in love with it because it shows the "complexity" of being a mob boss who is "troubled" at his life and whacking ways, and he even goes to therapy, and this is something great -- rather than the usual HBO violence-and-gore-fest.

The Sopranos was on HBO, a cable network I've always hated and do not have. (About cable TV, I'm considering just getting rid of it -- it's just not worth the monthly expense no matter how many acts of telecom legal stoogery Wall-P performs in a Godless Cosmos for the sake of mega-billion dollar companies.)


More to the point, though, what a ghastly and awful corporate entertainment complex that ruins everything. In other words, the essential BEST of America and everything it offers the world. Let the eagle soar! 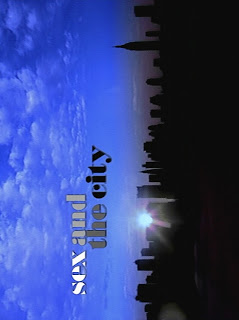 I also despised Sex and the City, another HBO series, with its four sociopathic nymphomaniacs who had sex every 3 minutes in the series with an endless parade of random men, usually upside down on a kitchen table in their $8 million a month Manhattan penthouses while eating cannolis and cream puffs, or "hidden" in the open behind garbage dumpsters. Idiots.


America's pop culture is depraved. But that's been true for quite some time.
******* 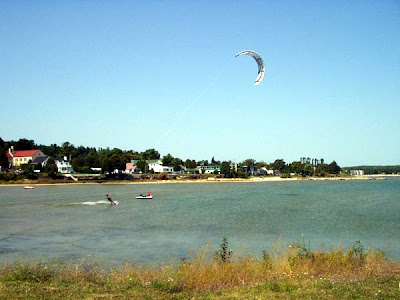 
I saw the CNN stuff while at the gym on some of the TV monitors (with closed-captioning). As for me while on the treadmill, I did what I usually do and watched the MSNBC lineup of Chris Matthews followed by the dork-fest of earnest but clueless rope-a-dope liberals (Hayes and Maddow) trying so diligently to call attention to this or that House or state legislative GOP atrocities of the day (as if the public is aware and/or cares). 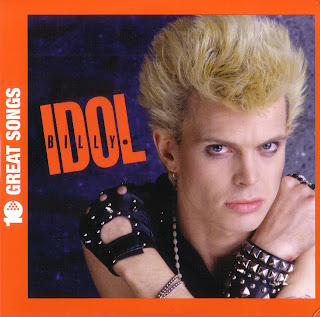 OK, that really is all for now. My next planned update will be Friday night.