Weights, Odds, and Calendar Dates -OR- The Real and Imaginary Numbers 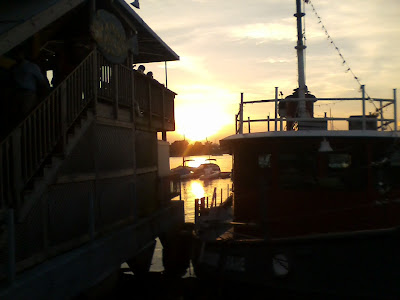 Sunset along the dock next to Cantina Marina in the Southwest section of Washington, D.C., 7:58PM May 21, 2013.
On Tuesday evening, there was an after-work happy hour at Cantina Marina located off Water Street on the Washington Channel (the body of water between Southwest D.C. and East Potomac Park). Some of the pictures in this entry were taken in association with that happy hour. Of note, I've been to the Southwest D.C. waterfront maybe a half dozen times in the 20+ years I've been in and around Washington, D.C.
*******


30 to 35 Pounds and 11 Months Later ...
OK, tonight at the gym my weight as I wore only bathing trunks (and a strategically placed paper towel) on the BIG SCALE in the locker room clocked in a whisker under 153 pounds. This is 30.5 pounds lower than my first "weigh in" following my INITIAL workout on June 23, 2012 -- the 11 month anniversary of which is this Thursday (today). 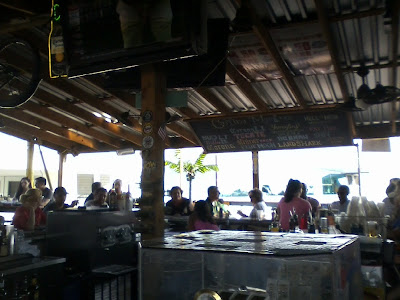 
Furthermore, between the several pounds of muscle I've added and the fact that the 183.5 pounds was already a few pounds below my peak, I have actually lost upwards of 35 pounds of fat. My rate of decrease per month has been pretty much ideal. 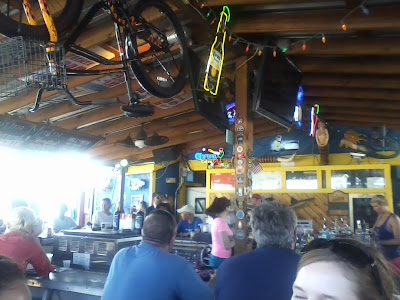 
I'm actually not sure now what is my goal. Ideally, I'd like to get down to about 145 pounds and be trim. I'd also like to be hot, muscular, and 26 years old, but none of that is going to happen.
I guess I'll just settle for 150 pounds and semi-trim.
On a related note, this brings me back to where I was the FIRST TIME I joined the gym in July 2001 -- back when I was 31 years old. 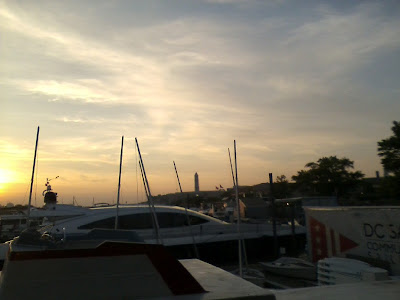 Another sunset dock view next to Catina Marina along the Washington Channel in Southwest D.C., and, yes, that is the scaffolding-sheathed Washington Monument poking up in the distance, 7:59PM May 21, 2013.
I had had three dark and stormy drinks at that point -- and that was enough. Well, actually, I took the Metro from L'Enfant Plaza to Farragut West (which I normally do anyway to do to the gym) and stopped in at a very curious subterranean bar called Recessions associated with a hotel. I had a drink (another rum one) in the nearly empty place. I ordered dinner to go. It was Mediterranean salad with grilled chicken and it was quite good. The bartender was very friendly and insisted I return. He said the place is normally more crowded. 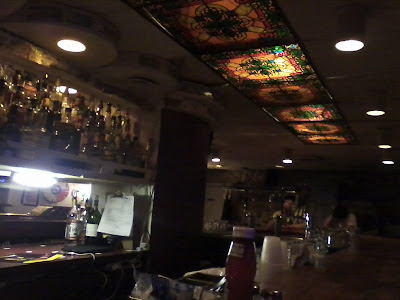 
I'm planning on going on Thursday but not Friday or Sunday, and as for Monday, it is the Memorial Day holiday and the gym closes early, although I have the day off.
*******


The weather tonight is muggy and warm with scattered moderate to heavy convective showers in the D.C./Baltimore area although for the ONE GOOGOL-TH time, EVERYTHING missed the sh!tty Reagan National Airport climate station (i.e., KDCA), the WORST weather spot on Planet Earth, bar none. 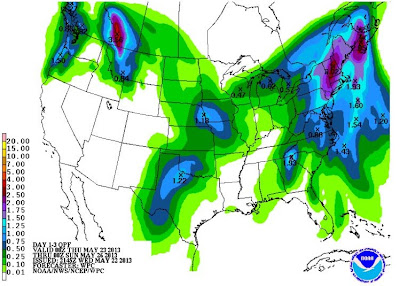 
There is once again a far over forecasting of precipitation amounts, at least for our area (see above map) with a 90pop / thunderstorms on Thursday night ahead of a strong cold front (actually, two fronts) that will usher in a delightfully cool, sunny weekend with highs around 70F and overnight chilly lows in the 45F - 50F range even in the immediate area.
******* 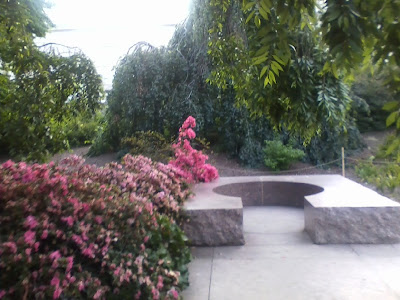 "Late season" flowers at the Enid Haupt Garden, Smithsonian Institution, Washington, D.C., 7:02PM May 22, 2013.
I walked to the Smithsonian Metro instead of L'Enfant Plaza tonight.
*******


Here is an absolutely tear-jerker of a tornado survival story from Oklahoma a few days ago ...
Above is the CBS video of the interview / discovery. The next set of images are screen captures from the video (some of which are a bit blurry).
It features elderly Barbara Garcia of Moore, Okla., bruised and a bit shell shocked, being interviewed by a CBS News crew amid the utter devastation of her home and neighborhood following the tornado on May 20th. She is being stoical as she recounts what happened to her and her beloved dog, and how she survived but her dog is still missing. Midway through the interview, though, a voice says excitedly "The dog! The dog!"
My guess is the dog was hiding until it heard the reassuring sound of her voice during the interview. 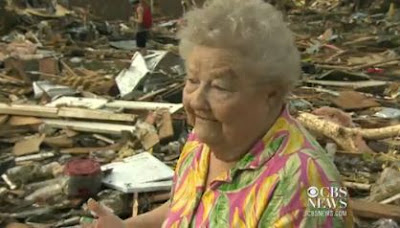 Ms. Garcia is suddenly overcome as she tries to remove debris from the little terrier doggy that tries to free itself. And over the next minute you see watch as she and the camera crew and reporter lift the debris and the little dog scrambles out, shaken and traumatized but not badly injured. 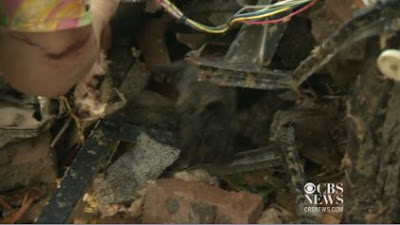 The most heart-wrenching part is hearing Ms. Garcia say over and over in her deep Oklahoma drawl "bless your heart" and "poor little thing" as well as a quivering "ohhh ... ohhh ..." as the dog emerges. Her voice stay with you after the video is over.
Ms. Garcia quietly thanks God and then says, "Well, I thought God just answered one prayer to let me be OK but he answered BOTH of them!" 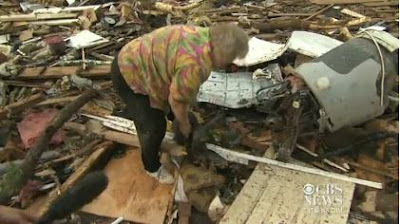 Here is the story as it appears on New York Magazine Daily Intelligencer blog (the same one to which Jonathan Chait posts). Ignore the troll comments about how it was staged. 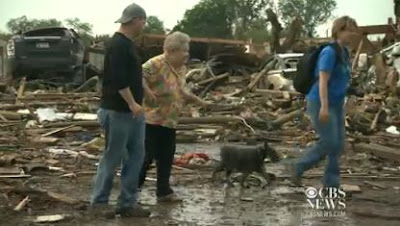 Speaking of God and tornadoes, here is an interesting story featuring Wolf Blitzer trying to get a young mother, Rebecca Vitsum, who is holding her 18-month old son, and who together survived the tornado to "thank the Lord" for the survival of her and her family. Ms. Vitsum politely tells idiot Wolf Blitzer, "I'm actually an atheist." 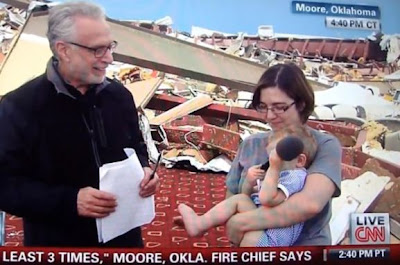 Screenshot of Wolf Blitzer's interview with Rebecca Vitsum and her baby son in the wake of the Oklahoma City area tornado.
*******


But then Ms. Vitsum quickly and graciously adds, "We are here and and I don't blame anyone for thanking the Lord."
Very classy indeed. Not one of these militant "fundamentalist Christian-like" atheists who never shut the f/ck up.
Oh, yes, I noted in an update to my previous entry that the death toll is fortunately much lower than initially feared, presently put at 24 including 9 children. 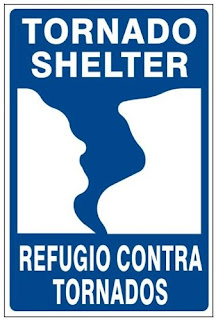 This is remarkable given the shear scale and scope of devastation through crowded suburban neighborhoods. It is definitely a testament to warnings and planning. But these folks need to start putting in more tornado shelters -- EVEN if it means a REGULATION (i.e, a RULE) (audible gasps of libertarian side-show horror and Tea Partiers yammering "don't tread on me"). 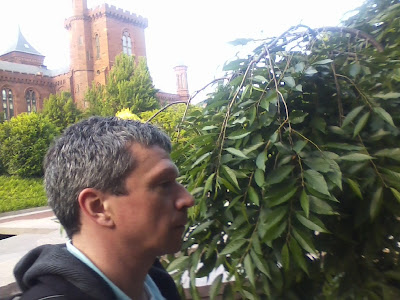 
Lastly, there is this f/cking old car parked on New Hampshire Avenue across from my building.

It's one of those old person's cars that never actually seems to move and whose alarm is increasingly broken so that it goes off intermittently for minutes at a stretch, stopping only to start again. However, each episode is about 7 minutes at a stretch (starting and stopping). Even my air conditioner and fan cannot block this. I'm going to have to figure out what, if any, can be done about this. I can actually see the stupid car with its yellow front lights flashing.


It's probably some clueless 75 year old person who has lived in D.C. for a million years and has no idea of this.
The alarm was going off as I wrote the above paragraph (it has since stopped), and I figured I'd mention it. Two nights ago, it did it once at 345AM. I almost moved into the closet but then it stopped. 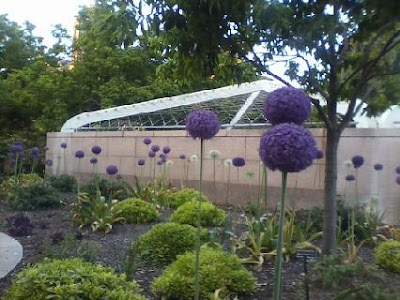 
OK, that's all for now. My next planned update will be on Friday night (musical interlude).
--Regulus
Posted by Regulus at 2:59 AM