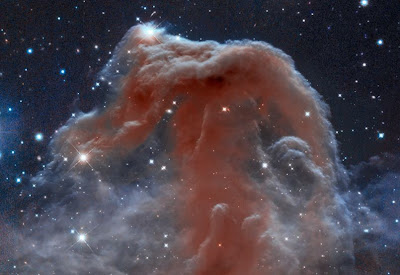 Often the Astronomy Picture of the Day (APOD) website has amazing photos of stunning celestial treats. But sometimes it has images that just astonish me -- and don't even look real. That is the case with the May 3, 2013 APOD featuring a picture of the Horsehead Nebula (Barnard 33) in near infrared light that is based on a composite of the ESO ground-based VISTA and Hubble Space Telescope images.
In case you don't recognize it, here is a more familiar view of the Horsehead Nebula (though I'm thinking it looks more like the Loch Ness Monster or a dragon). 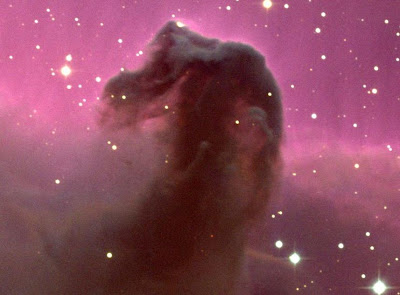 This is a visible image taken at the Kitt Peak Observatory while below is an Osservatorio MTM image that is from the May 13, 2010 APOD. 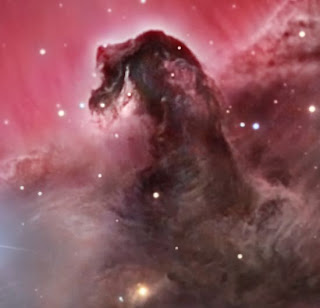 The Horsehead Nebula is about 1,600 light years away. Newborn stars illuminate the top of the dusty "pillar" cloud.

Of note, the Barnard 33 dark cloud that actually makes up the "horse head" of the nebula is about 5 light years "tall" (source here).

In case you were wondering ... 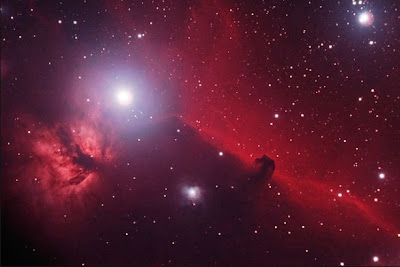 Here is a larger perspective of the Horsehead nebula in relation to Alnitak, the leftmost of Orion's belt stars. 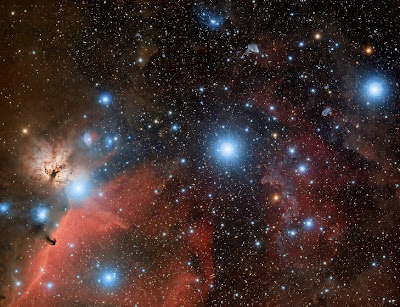 And here is the Horsehead Nebula (lower left black "finger") and Flame Nebula in relation to all three Orion belt stars, Alnitak, Alnilam, and Mintaka. This was the January 21, 2011 APOD.
*******


And apropos of nothing, below is a simulation of what the sky might look like in about 3.75 billion years as the Milky Way and Andromeda Galaxies -- which are moving toward each other at about 110 kilometers per second (approx. 70 miles per second) -- undergo a slow-motion "ghost collision" that results in wild tidal distortions that eventually coalesces into an amorphous giant elliptical galaxy. 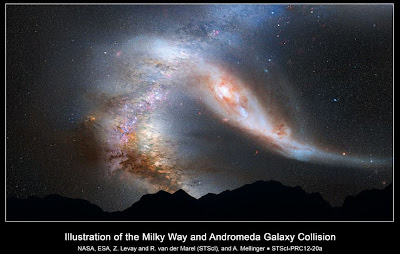 Imaging / imagining the night sky on a (long dead) Earth 3.75 billion years hence as the Milky Way and Andromeda Galaxies have already started their "ghost collision" with hundreds of billions of stars in each "spraying" and "spewing" outward in geysers and jets of stars and stardust but (mostly) over time "falling" back inward through titanic gravitational interactions.
The most fascinating aspect will be the collision and coalescence of the two central supermassive black holes -- Sagittarius A* and the Andromeda's (unnamed?) one.

But what will be the chirp mass??
Of course, Earth will not exist in anything like its present form in 3.75 billion years. The oceans will have long since boiled off and any life likely long since have disappeared as the Sun has swollen into a red giant. 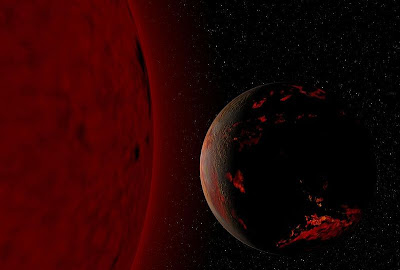 It is also possible that Earth might have already been devoured by the Sun -- though (I think) the thinking is that it will have migrated far enough away from the Sun (as the latter loses mass) to avoid that fate, and instead it will be an airless lump of frozen dirty hydrocarbons. It is doubtful even much of a fossil record of the Time of Man (the Anthropocene) and its successor epochs (Time of Machines?) will remain.
Also, in that far distant future, there will likely be far more red dwarfs than there are now, but the era of black dwarfs will still be trillions of years thence in an the impossibly distant epoch known as Deep Time.
--Regulus


P.S. I'm going to save my Friday night musical interlude for Saturday night.
Posted by Regulus at 11:38 PM